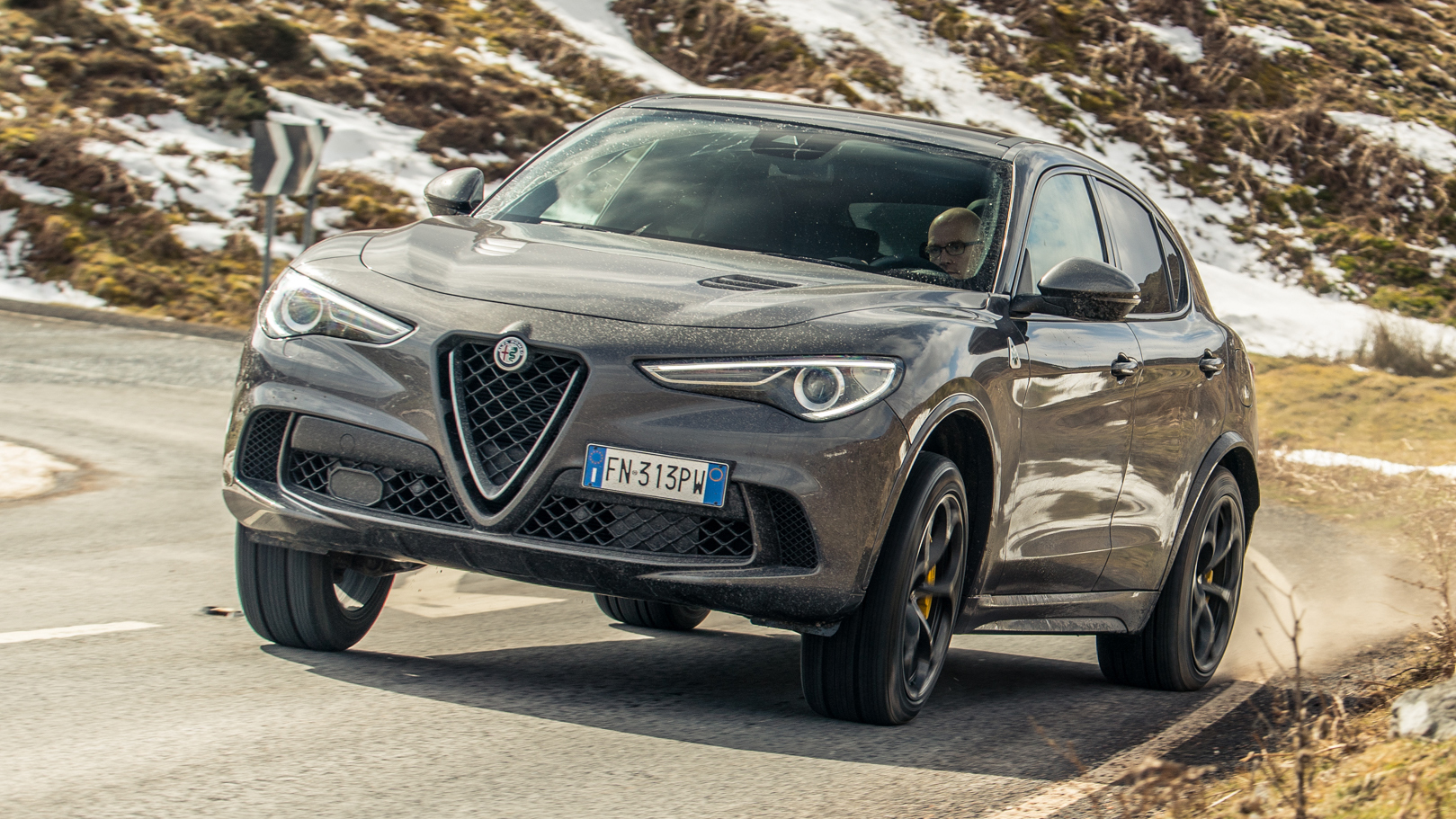 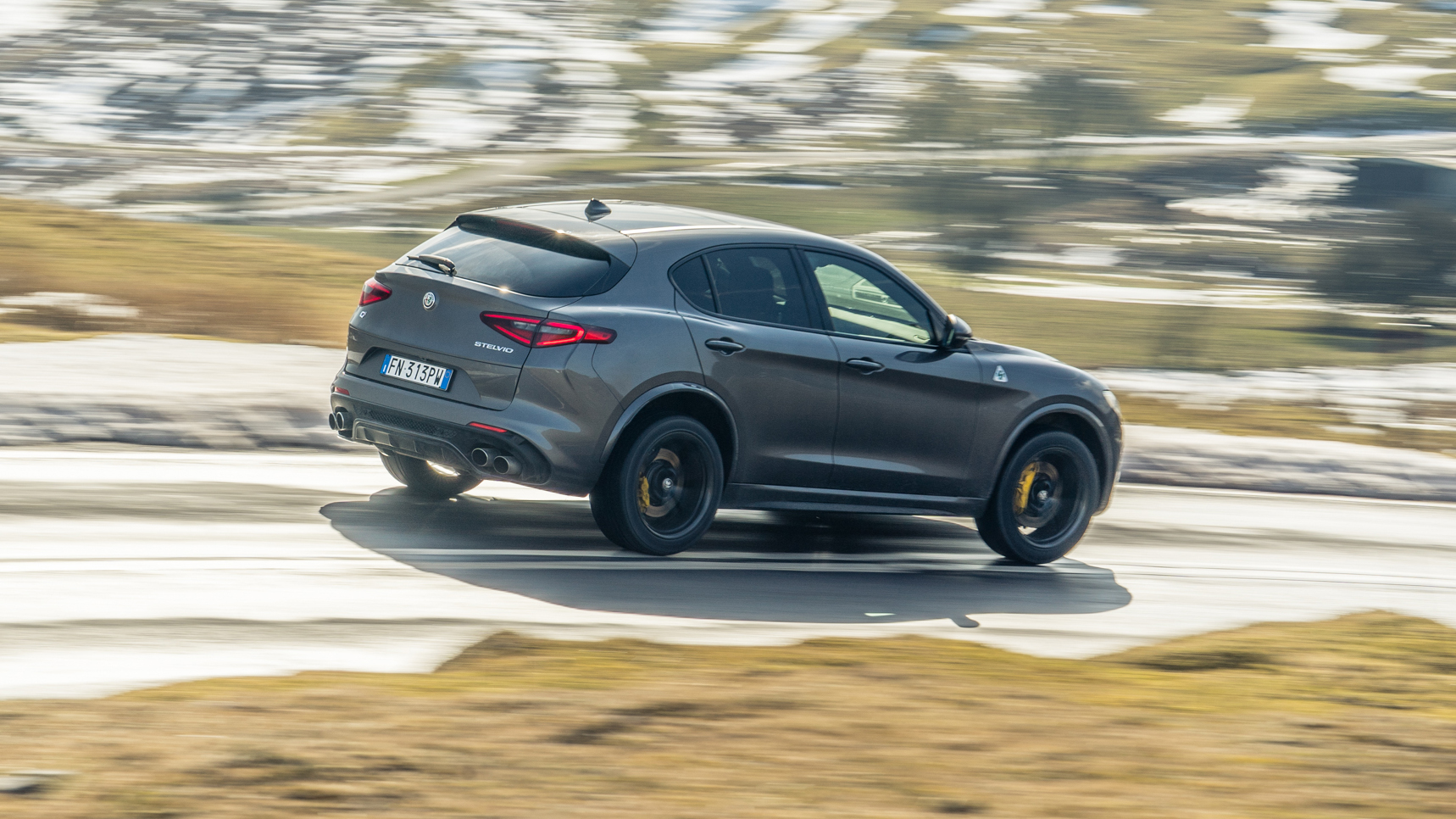 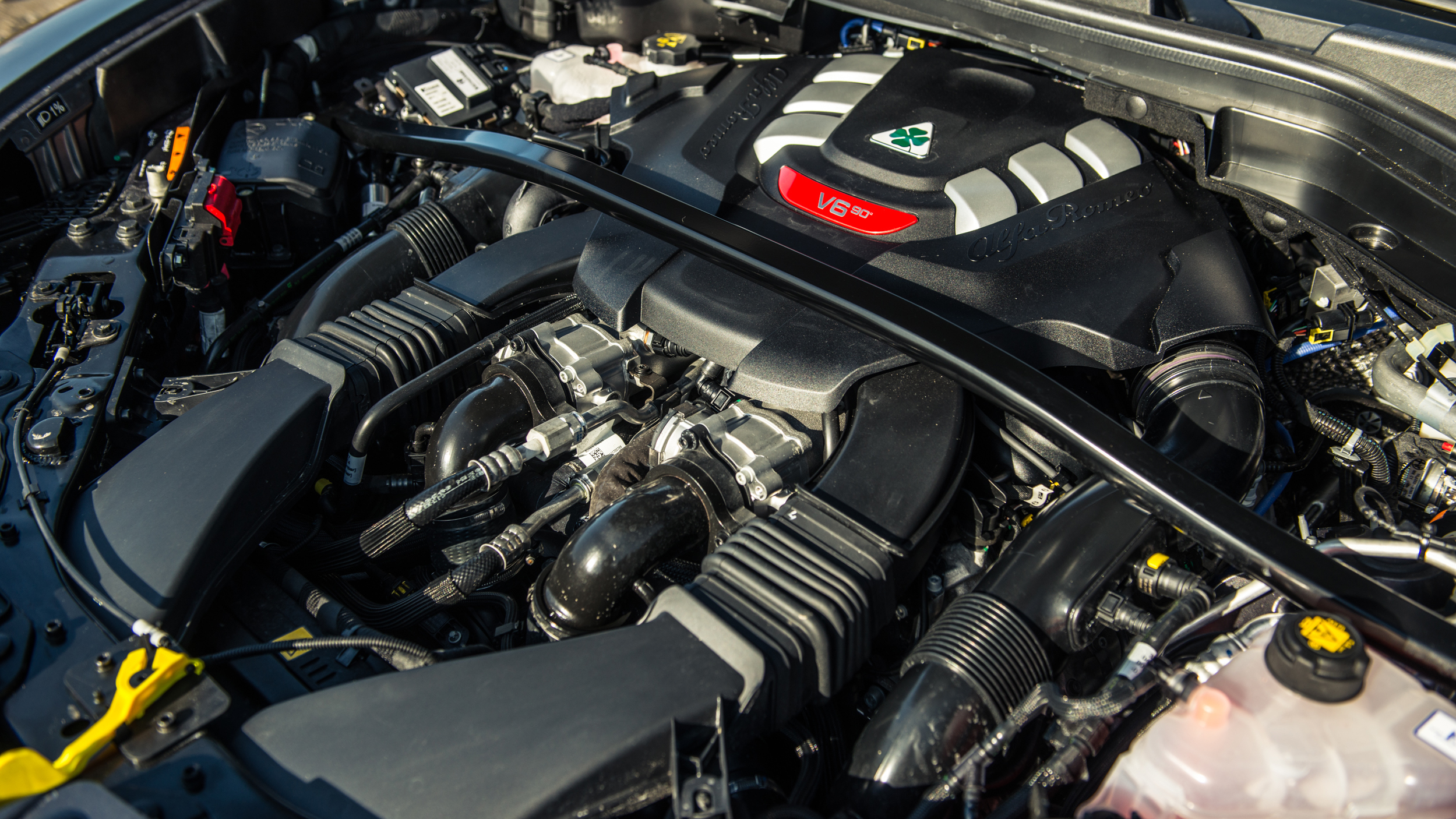 How much is it going to cost?

I see you’re on point with the news. Alfa Romeo has announced today that the Stelvio QV will cost £69,500 when it lands in the UK this September. That’s a chunk of money, but puts it bang on line with the Macan Turbo Performance Pack (just a fiver more at £69,505) and forthcoming £69,320 Mercedes-AMG GLC63. Later this week you’ll be able to read a twin test between Stelvio and Macan.

I said later. In the meantime let me tell you about the Stelvio, and specifically how much it has in common with the Giulia Quadrifoglio that has beguiled us so much (and occasionally frustrated us, as Rowan Horncastle’s recent report pointed out).

The Stelvio SUV shares its chassis with the Giulia saloon – a neat bit of cost-saving – although it has unique subframes front and rear. Under the bonnet the 2.9-litre twin turbo V6 has identical outputs to the Giulia – 503bhp and 442lb ft, but the engine calibration has been changed to suit the SUV's broader remit. The 4WD system? Well, that has a lot in common with the system found in the Maserati Levante, although again the calibration is unique to this car.

In normal driving all the torque goes to the rear axle, where it’s apportioned to either side via a torque vectoring differential. When that all becomes too much (and with 500bhp heading that way, it does) the system detects wheelslip and shunts up to 50 per cent of the power forwards.

Just how fast is it?

Extremely. Alfa claims 0-62mph in 3.8secs and a 176mph top end. Quite what a tall SUV would feel like at 176mph I’d rather not contemplate, but I can confirm it does accelerate ridiculously briskly. Even wearing softer compound winter tyres which limited traction off the line it hit 60mph from a standing start in 3.9secs and exactly five seconds after that was sailing past 100mph. Yep, an SUV that can batter its way to a ton in under nine seconds (the ¼ mile was dusted in 12.24secs at 116.4mph). That’s faster than a Range Rover Sport SVR (10.1secs) or Porsche Cayenne Turbo S (9.3secs). A 707bhp Jeep Grand Cherokee Trackhawk, which claims 0-60mph in 3.3secs, might be the only SUV to get its nose in front.

Can the chassis cope with the performance?

Before we get on to that let me tell you about the cabin. Mainly because you need to remember there’s probably a very good reason you’re buying this instead of the eight-grand-cheaper Giulia Q – you have a family. Well, not necessarily, you might just want the SUV for its raised POV or because you like the image.

But even if that was the case, you’d be pleasantly surprised at how big the boot is – it goes back a surprisingly long way. And then you open the rear doors and discover why – rear legroom isn’t so generous, and the big front sports seats do make it feel slightly claustrophobic. Factor in some fruity driving and you’d be able to add nausea to that as well. Your family would really love you then.

It’s… well, not great compared to other £70k SUVs. Let’s look at the good stuff: it’s not overly laden with tech, so doesn’t take a PHD to fathom. The paddles that operate the eight-speed auto are a delight to touch and pull. The seats are lovely. It has a sporting ambience, so sets a good tone for what’s to follow. The carbon is nicely done. The DNA dial is super-straightforward.

But then come the complaints. The switchgear doesn’t feel robust or operate with pleasing precision. The graphics and functionality are limited. There were some trim squeaks. I know these are familiar criticisms, but who’s wrong: us for pointing it out again, or Alfa for not fixing it? The trouble for Alfa Romeo is that this is where the Germans excel and, as a result, that’s what buyers have got used to. The Stelvio’s specification will draw BMW, Porsche and Merc buyers to Alfa, but they’re in for a shock in the showroom.

Now, you might be a dyed-in-the-wool Alfisti, and this won’t put you off, but for Alfa’s success to continue, the firm needs to build cars that can sell to a much, much broader fanbase. At the moment there’s little sign that build and material quality is any better in the Stelvio than it is in the Giulia. And that’s a shame because it drives unlike any other SUV.

Provided you want your sports SUV to act, sound, feel and handle like a sports SUV, then yes, absolutely. What’s astonishing is how much of the Giulia Q’s DNA makes it straight through uncorrupted. This doesn’t feel toned down. At. All.

Twist the DNA dial to D-for-Dynamic and the Stelvio Quadrifoglio is every bit as energetic and eager as its saloon counterpart. Alfa claims it only weighs about 60kg more and that means it erupts forward, engine bellowing, exhaust trumpeting, tyres digging for grip. It romps through the rev range from under 3,000 to past 7,000rpm, and when you pull a paddle there’s the most addictive upshift exhaust crack.

It does settle down in lesser modes, but Dynamic is the sweet spot, has the best calibrations. Do you need Race? I’m not sure – it completely disables the stability control, and despite 4WD, being on your own and cut off from electrical intervention in an off-roader is more concerning than in a low slung saloon.

Because you do sit high in the Stelvio, you feel a long way off the ground, and although the centre of gravity is low (look how far down and back the engine sits in the bay), you can’t help but feel slightly ill-at-ease when you’re pressing on in it. Mainly because of the shocking speeds it can dial up so quickly.

Does it still have a super-fast steering rack?

It does, and once again it’s been beautifully set-up. It never feels nervous on motorways, so tracks straight, true and stable, yet small movements elicit big responses. It’s a trick Alfa has borrowed from Ferrari and it works, making the Stelvio’s front end feel sharp and precise.

But it’s the way it gets itself out of corners that’s most entertaining. The 4WD system takes a moment to wake up, so if the corner is tight and you shoe the throttle you can get a quick snap of oversteer. Really. But then the torque split wakes up, shoves the power forward and you exit with the nose high and tail squatting. It’s not the most nuanced handling car, but if you like your kicks easy and accessible, you’ll love this. Just watch the width – rapid it might be, but it also feels wide on a UK B-road.

Is it comfortable, too?

It does well enough. It’s not completely successful at rounding off bumps and holes, and some residual vibrations and noise are transmitted into the cabin. But you’d live with it. It’s not a harsh car, just an exuberant one.

With that in mind, do keep an eye on the fuel gauge. The Stelvio QV has a fearsome thirst. As in 23mpg on the motorway and 14-16mpg on a B-road. Overall we got less than 19mpg in 350 miles of mixed driving. 58 litres of fuel does not last long.

The most playful, boisterous and eager fast SUV there’s ever been. It’s great fun, but as it has a different, more rounded remit to the Giulia saloon and Alfa has had two years to improve the build quality, it’s harder to forgive the deficiencies. But then you drive the Quadrifoglio once again and it wins you over with sheer charisma. Daft, lovable, roguish thing.