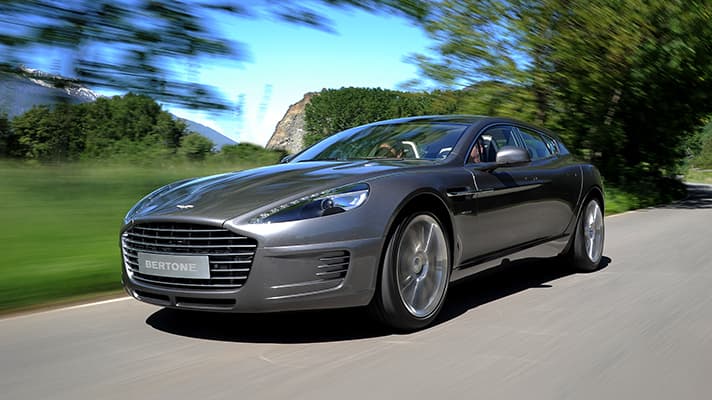 We'll give you a moment to take in the image above. Rather beautiful, isn't it? Sixty years have passed since legendary coachbuilder Bertone and Aston Martin skipped down the garden path together with a pair of DB2/4 models. The one-off you see above is like a giant, two-tonne anniversary card.

Aston enthusiast Barry Weir was the man who commissioned it. He rather liked Bertone's original Jet 2 - the 2004 Vanquish-based shooting brake - and asked the Italians for similar treatment on a 2+2 chassis. A 2+2 chassis like the Rapide. Now, Bertone doesn't just build anything for anyone (Astra Coupe aside), but it got very interested in continuing its long history with Aston.

The whole car took three and a half months to complete, from renderings to a full-scale plaster mock-up dubbed "Frankenstein" to final hand-beaten production model with that estate-like rear, built of carbon fibre, aluminium and sheet metal. There was even a ‘style freeze' while Aston was busy refreshing the Rapide itself. Although the bumpers are different - to reflect the fact this is Weir's individual car - it was actually Aston designer Marek Reichman who told Bertone to hold off and use the new, updated Rapide S grille for this Jet 2+2.

Sadly, Bertone didn't use the new, updated Rapide S 6.0-litre V12 producing a healthier 550bhp. In fact, Bertone didn't even sniff at the drivetrain: as the Italians told us, they just "tailor the suit". Thus, you're looking at the first-generation Aston Martin Rapide, with a 470bhp 6.0-litre.

Yet fire up the V12, and all regret is momentarily shelved. The chassis and drivetrain remain as per Gaydon's original, so it still sounds like an Aston Martin. And don't forget: the Rapide is a glorious thing to move about in. Bertone has managed to match the original kerbweight - give or take a few kilos - so it drives exactly like a standard Rapide. Which is to say, fine steering, excellent damping and super-saloon pace. There were quite a few squeaks and rattles during our test drive, mind, but a few blips of the throttle soon drowned those out.

A consequence of leaving the chassis as standard, however, is the lingering woeful rear legroom. Weir did request more space for limbs in the back, but Bertone didn't want to touch the structure underneath. Thus, while the shooting-brake rear opens up acres of headroom - six-footers can avoid having their craniums bludgeoned by a C-pillar - the seats are the same. The glass roof is ace, mind: it opens up the cabin beautifully and feels less claustrophobic than a regular Rapide. And here's something to chew on: Top Gear was told discussions are "ongoing" regarding a small production run of these Jet 2+2s. Praise be.