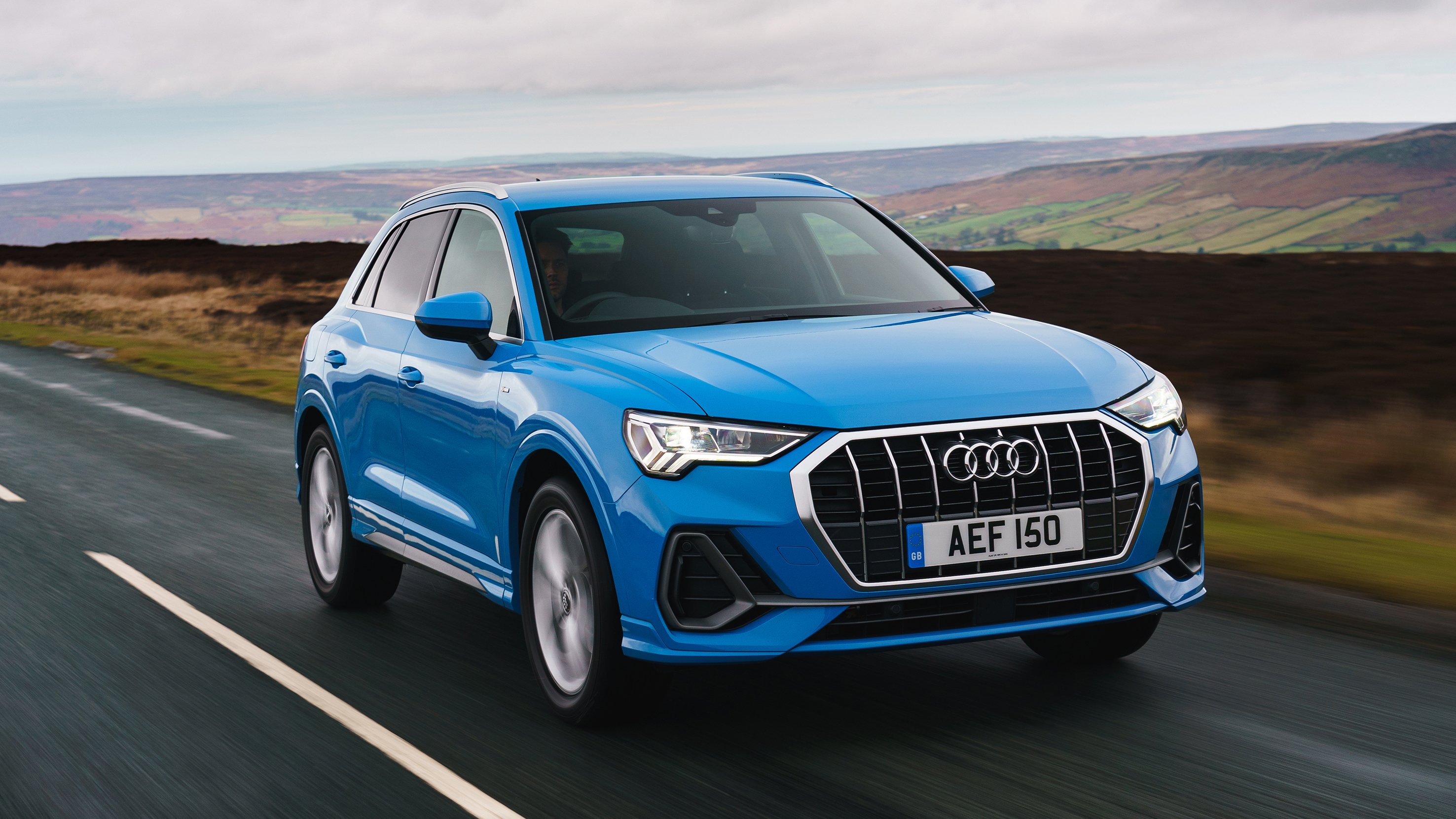 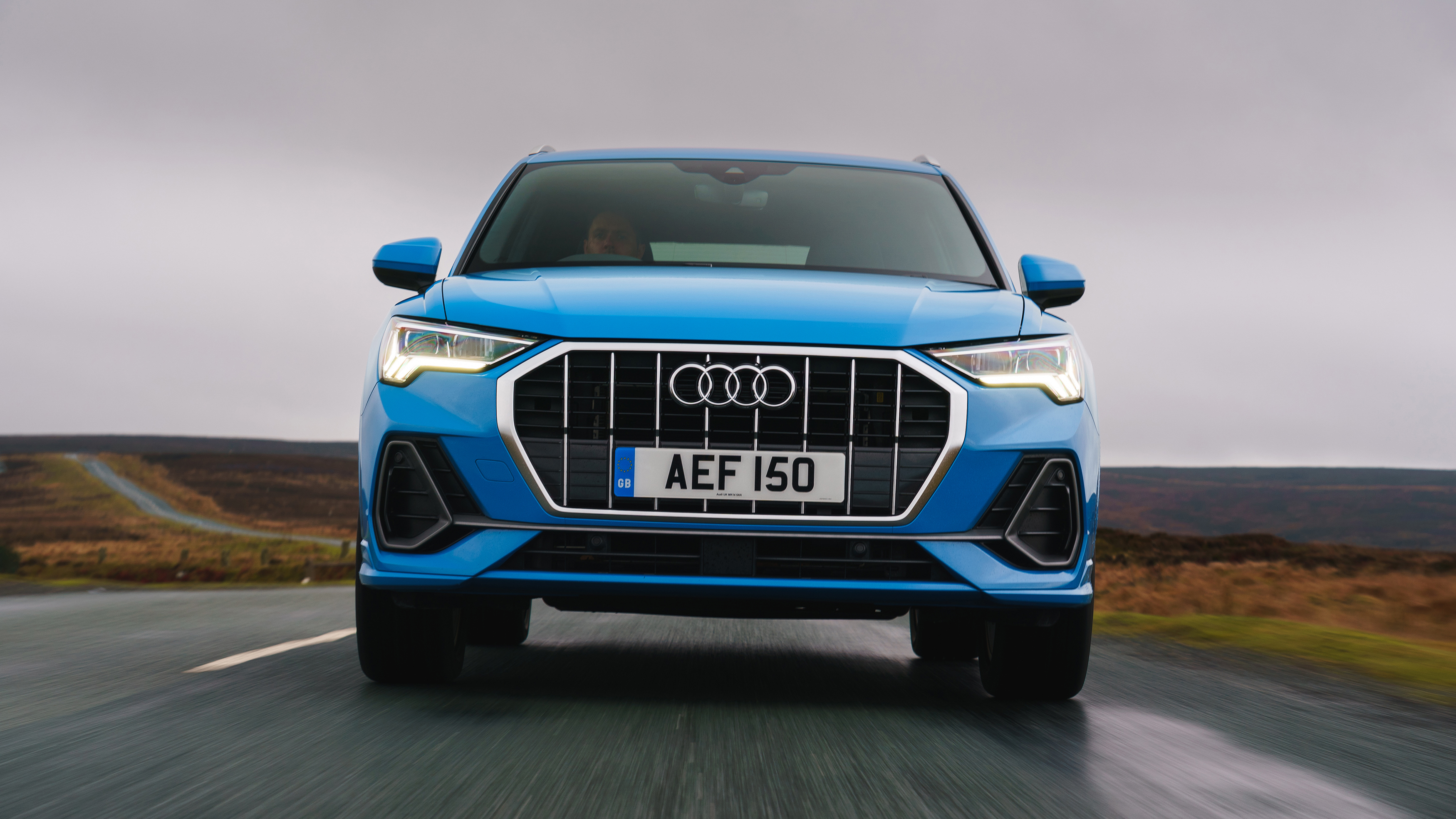 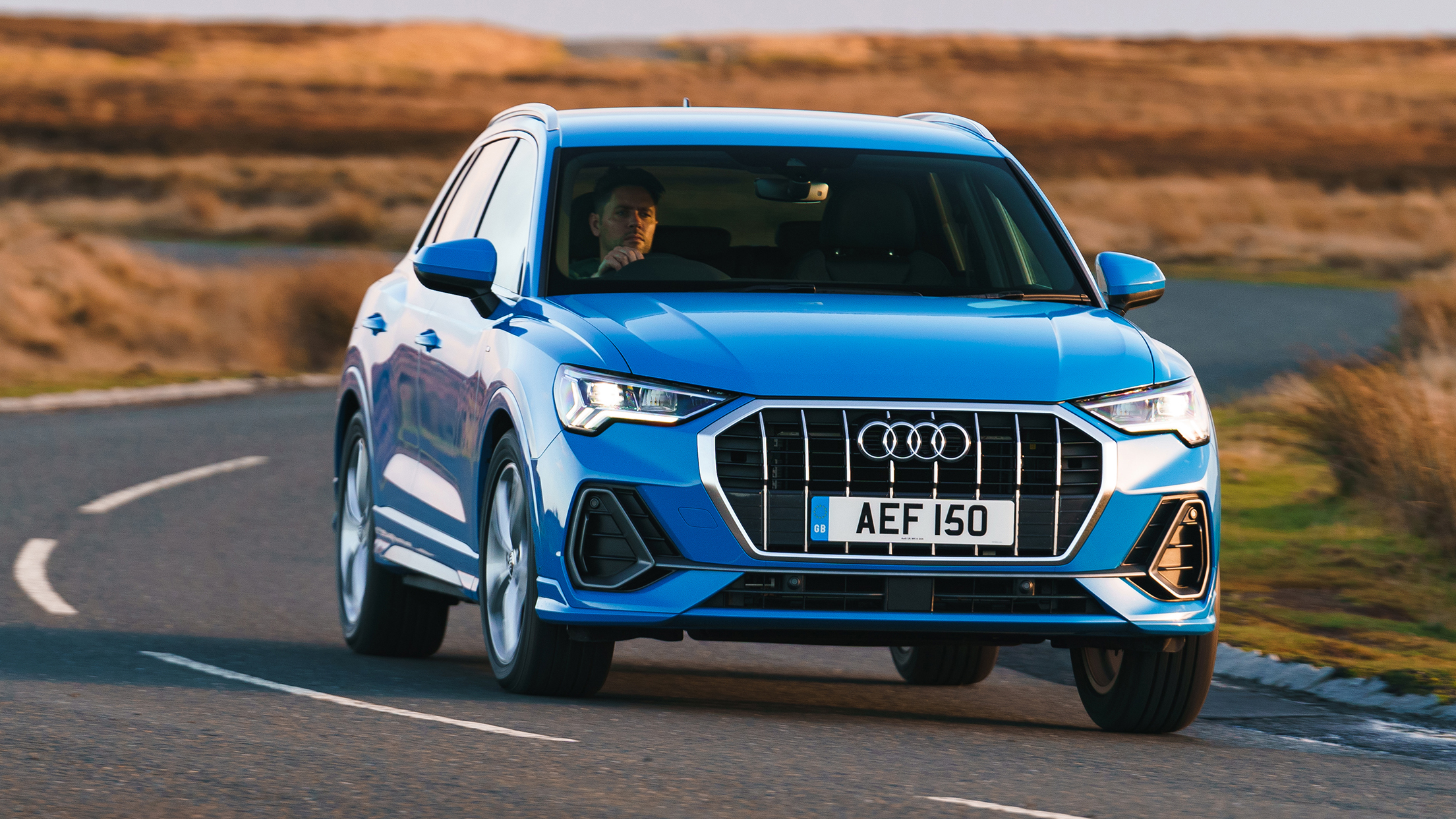 Which Audi crossover/touchscreen-transportation-pod is this?

This is the new Q3. And because the old Q3 stayed on sale a whole eight and a half years, Audi managed to slot the Q2 in beneath it. As a result, the new one’s bigger.

Good news when there’s so much more competition these days – the Jaguar E-Pace is hardly roomy itself, but the Q3 Mk2 also has to contend with the Volvo XC40, DS 7 Crossback, Range Rover Evoque and an imminent Mercedes GLA.

It also looks less awkward – less like a ride-on toy car with a cartoonishly short wheelbase. The grille is huge and prominent, bursting from the nose of the car. Lights are angular and more intricate. There’re some butch shoulders towards the rear, hinting this is a grippy, sure-footed quattro beast of a machine.

Not unless you spec a 2.0-litre engine, and plenty of UK buyers won’t. 2.0-litre = four-wheel drive. And an unfriendly CO2 ranking.

This ‘it’s a boy’ nursery blue Q3 is more relevant. A bodykitted S-line featuring VW’s clever 1.5-litre ‘Evo’ petrol four-cylinder motor, and it’s a spot-on fit for British tastes. A sensible 148bhp, a modest 133g/km, front-wheel drive and an optional automatic gearbox. You don’t have to have it in Thomas the Tank Engine Blue if you don’t want to.

But I could just have a VW Tiguan, right?

You could, but the Audi does a few things better. First off, the seats are comfier than the curiously flat chairs in the VW. You can also sit them a little lower, for a more car-like driving position. You can jack them up and go for the lord-it-up SUV point of view as well. Either way, it’s a better resolved driving position.

Like the new A1, the Q3’s interior is based around the belief that big, clear screens are more premium than plush, quality trimmings. All Q3s get a central touchscreen with ultra-sharp menus and fast reactions, and a version of the Virtual Cockpit instruments that, five years on from its reveal in the TT, still betters anything in the industry.

But once again, like the A1 (and unlike the TT, or say, the outgoing A3), the focus on philanthropic tech erodes the quality of what you touch away from the screens. Cupholders, door cards, handles… it’s not quite brittle, but it’s not special either. Not noticeably posher than what you’ll find in a VW, certainly.

It’s noticeably roomier, though. This is now a viable family car, with a flat-silled, wide boot and generous stowage cubbies. The little things that make daily grind family work less of a grind.

Has Audi sorted out its slurring, staccato automatic gearbox yet?

Not on this evidence. Audi’s S-tronic dual-clutchers used to be reliably excellent – snappy when you wanted them to pay attention, and smooth when you weren’t. But the latest versions, as found in the A1 (and the related VW Polo), seem to have been utterly hobbled by WLTP testing regulations – or a disgruntled, rogue engineer who’s typed a rude word into the mapping code before being handed his box of things and told to Foxtrot Oscar.

The gearbox is in a constant battle with your right foot, not to translate your gentle prods of the throttle into drive to the wheels right up until you really step on it and the front wheels chirrup in panicked wheelspin. Rather ruins the sure-footed Quattro image, that.

The A1 and Q2 suffer the same fate, but the Q3’s a bigger, more mature car, and when it’s got 148bhp on tap, instead of a weaker 1.0-litre triple, the effects of nothing-nothing-nothing-FULLPOWER engine delivery disturb the peace more. This, like all of Audi’s current crop, is a very quiet machine – most of the time.

In stark contrast to the transmission it’s bolted to, this engine continues to impress. The handover between two cylinders when on light load and four cylinders is smoothly handled, and the power’s delivered with linearity – it’s not as heavily boosted as some 1.0-litre and 1.2-litre engines in rivals are.

How's the rest of the drive?

Unmemorable. No, wait, the ride’s quite firm. More so than a Tiguan, because someone in marketing wants Audi to be sportier than VW. Cornering is fairly flat as a result, but honestly, who’s cutting apexes in a Q3? This thing’s all about portraying an image to make Qashqai and Sportage owners long for scrolling LED indicators.

Which it does, right?

On balance, the Q3 does enough to be taken seriously as a contender – it’s a better downsized SUV than the BMW X1, more interesting looking than a VW Tiguan, it’s plenty refined and the screens will please people whose smartphones could double as dinner place mats. It deserves a better (older) gearbox, and like the A1, avoiding S-line trim for a less jarring ride.