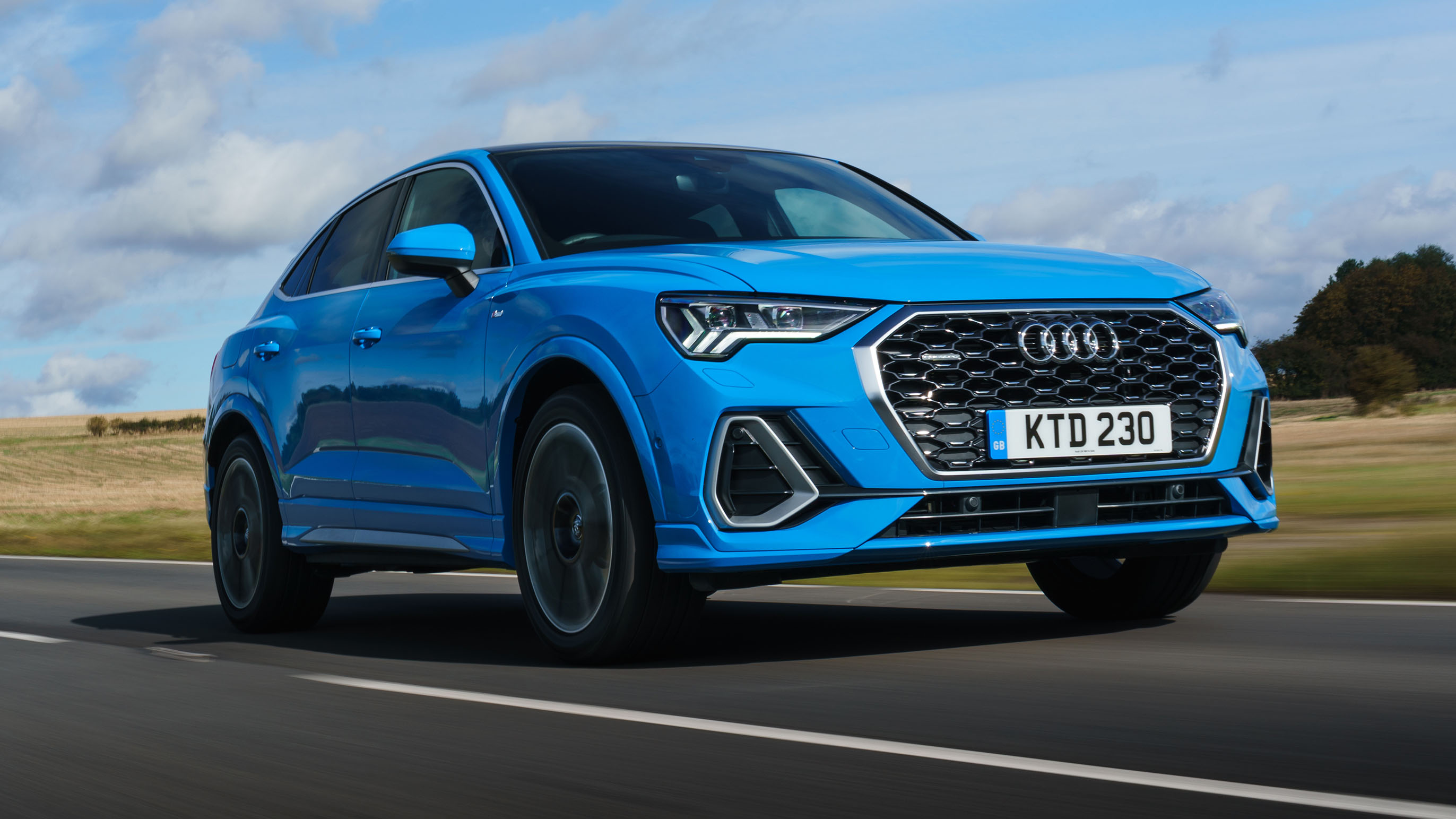 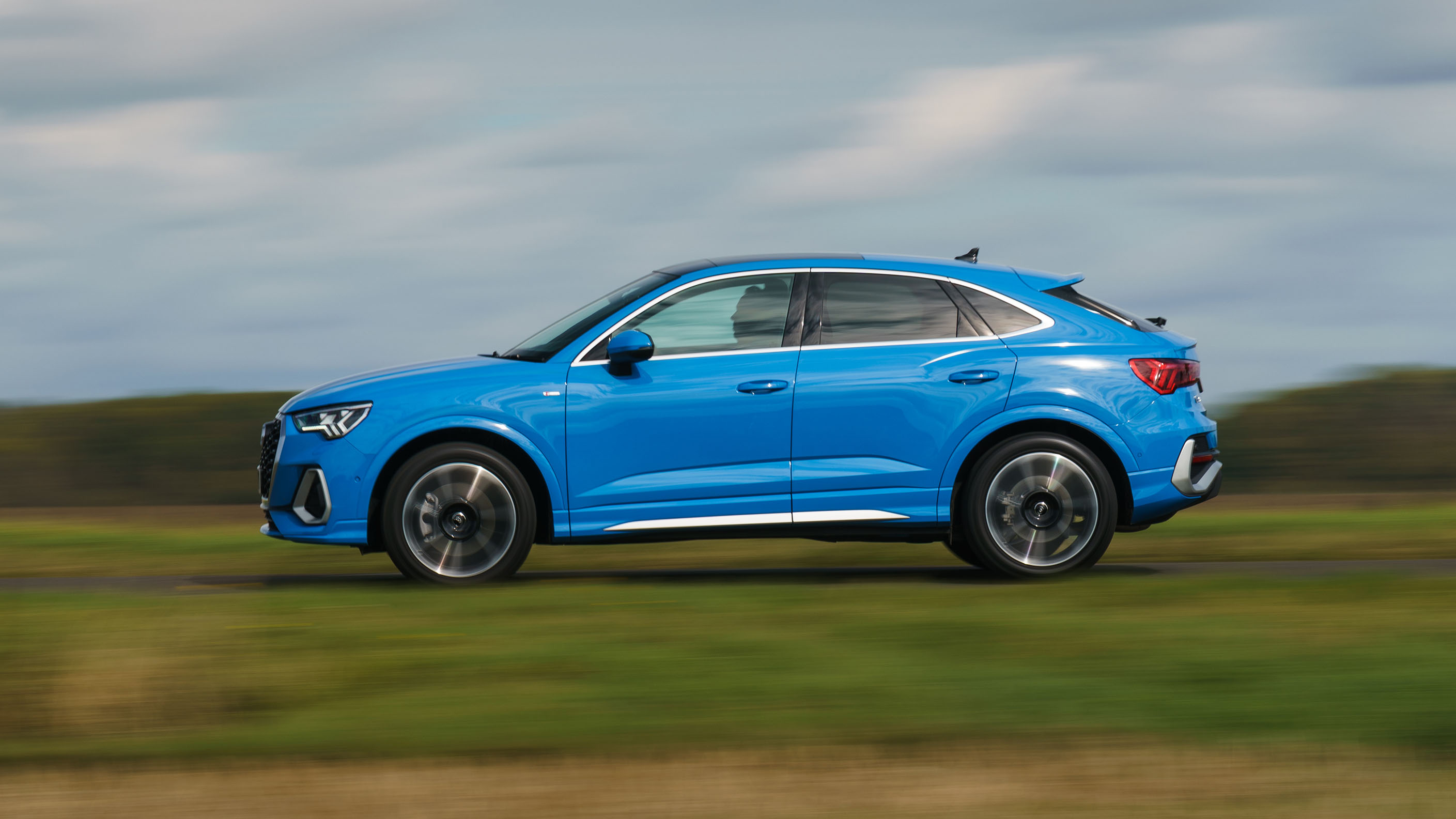 Good grief, another one?

What, another Audi crossover? Yes, it's the Q3 Sportback. Another crossover with a mildly couped roofline? Yup another one of those too. You're in the Evoque and BMW X2 ballpark.

So it's a Q3 but longer and lower.

– Sorry to interrupt, you're going to have to explain those numbers again.

Oh sorry. But hey, you're not the only one still trying to get the hang of Audi badgery. OK, 45 TFSI signifies in this case a 2.0-litre petrol, making 230bhp. Thus becoming the sparkiest Q3 we've tested.

Is the style as charming as intended?

We wistfully remember the five-door TT Offroad concept from 2014, but this isn't it. Angles replace graceful arcs. Folds replace curves.

Still, the proportions are good: chunky but not clumsy. And the raked roofline works well. The sides are nicely surfaced too, showing arches that flare out from high up on the door skins.

Good so far. And then… lower down the body it all kicks off. There's a whole bunch of stuff going on, most of it turned up far too loud – polygons of fake plastic, blanked-off grilles, the bright-plastic flicks and edges. Someone please give these designers a rally car to play on. They've got things they need to get out of their system.

But you can disguise that by choosing darkish silver paint. What about this inside?

Room in the back isn't significantly compromised by the roof-line having been shaved. You're not insulting anyone by sticking them back there: they get vents and storage and reading lights.

The boot remains a good size too, at 530 litres.

Up front it's very much Q3-as-usual. Neatly designed and well-executed provided you like touchscreens and don't miss the rotary controller wheel. (We do.) The centre screen does have a nice haptic click, which helps usability. And the climate controls are actual physical knobs, admirably.

Mostly it feels solid and made out of quality materials. Except, oddly, the one piece of furniture you're certain to grasp every journey, the door pull. It's hard scratchy plastic with a sharp edge between the halves of the moulding. Not a grievous issue, but a curious oversight.

Pretty briskly, although never like a hatch of similar power. It just doesn't feel that eager. It's not bad. Turbo lag is only there if you go looking, and the S-Tronic transmission doesn't hamper you. Yet the whole assembly fails to find much amusement in the exercise. It emits a plaintive metallic moan when you stretch it, and it's clear this isn't meant to be driven with too much involvement as the S-tronic doesn't provide column paddles.

Take a more easeful approach and the engine's sound recedes and is decorously free of vibration. That's how it wants to be driven – power and torque is there but for special purposes only. They'd rather lurk in the background.

Its purchase on any road is to all intents and purposes inexhaustible. So you won't be bursting the envelope. Driven sensibly, it takes bends with more levity than I expected. The steering's light but guides things faithfully enough.

Our top-spec test car has adaptive dampers. Sport mode is jiggly, but whatever mode you select there's always a sense the 19-inch wheels are a bit too heavy, feeding up a mild aftershock after every quake. Tyre noise is a bit of a bore too.

You sound like you'd have been happy with smaller tyres, FWD and less power.

Probably. Soon after launch they'll add a 35 TFSI FWD 1.5-litre version with 48V mild hybrid. Unless you want to tow big loads up mountainsides, the 45 quattro is overdoing it.

Especially as the car pictured here is £50,000. People buy expensive crossbreed dogs – cockapoos, labradoodles. That's where we are with the Q3 Sportback, a crossbreed of car morphologies. But opting for a £50k version is like putting a tiara on your pet.