What’s it like to drive Bentley’s Pikes Peak record holder?

1/16
Rhys Millen is three inches taller than me. This much is crystal clear once I’ve swung open the sponsor-emblazed door of ‘his’ Bentley Continental GT, folding my limbs clumsily through the gap in its roll cage, dropped a little too harshly into its (fixed!) racing seat and pulled the six-point harness tight. I can’t quite push the brake pedal all the way down. And the seat doesn’t adjust… I reverse the lengthy entry procedure and acquaint myself with the reception desk of a nearby inn so that I can borrow a gold, velvety cushion to stick behind my back and push my legs a smidge further forward in order to actually use the brakes with confidence. Because I suspect I’ll need to. The target stage times notched on its ‘cage in silver pen indicate that this car’s special: it nabbed the ‘fastest production car’ record at the Pikes Peak hill climb in Colorado in 2019, ascending its 12.4 miles in 10m 18.488s. Which, when the Nordschleife is a bit longer and its production car record over three minutes quicker, mightn’t immediately drop your jaw. But when you consider Pikes Peak climbs 5,000ft from start to finish and ascends even more corners (156 in total), the Conti’s achievement ought to crystallise. Especially given it weighs over two tonnes. Exactly how much over, I couldn’t say. A standard Continental GT – with the W12 engine this racecar uses – is a princely 2,244kg. But I’ve a strong suspicion this Pikes Peak car is a bit skinnier; the rulebook allows the trimming of weight to counteract the additional essential safety equipment and given the extreme makeover this GT’s interior’s seen, Bentley’s surely binned as much as possible. The air con’s gone, there’s a touchscreen yet no media system behind it, while the exhaust system is a straight-through Akrapovic system which finally frees the voice of an engine that lives its life gagged. Usually there’s a whole herd of leather inside one of these, but now the only two seats you’ll find are huge wrapround Corbeaus that make seeing out of junctions extra tricky. Yeah, junctions. Bentley’s taken leave of its senses and let us drive this car – the exact one Millen drove nearly three miles into the sky – on a blindly crested, bumpily tarmacked British B-road. How they got it certified enough to wear number plates I’m not sure: press the standard starter button in the middle of the wholly standard centre console (having pressed a big, very non-standard red button to kickstart the car’s power unit) and the noise as it stokes into life is snarling, deafening, outrageous. A family out for an afternoon stroll instinctively shield their kids as I rumble away into rural Northamptonshire. The whole thing is an assault on the senses: deafening noise pouring into your ears, and a heady mix of fumes circulating through holes in the firewall like there’s a ’99 RON’ scented Yankee Candle burning in one of the cupholders. Thank the lord I’m a shortarse, really. That gold cushion’s brought back a touch of the decorum Bentley flung into the skip when it stripped this thing out. Plenty about this car is alarming, not least an array of warning lights and messages flashing across the instruments that’d put Blackpool illuminations to shame. ‘Parking brake on!’ reads one. ‘SOS button error!’ another. I guess if you balls things up at Pikes Peak, an automatic call to the emergency services won’t offer a huge amount of help.

For all the initial intimidation, though, it’s a doddle to drive. Leave the paddles untouched and the eight-speed automatic gearbox shuffles politely (if loudly) through its ratios while the suspension setup, like the engine, is left completely standard. It’s been locked into its toughest mode, though, while the stability systems are in their most dynamic. Less than ten per cent of its torque is allocated for the front axle, the vast majority of its 626bhp and 664lb ft dedicated solely to the rear wheels. Rear wheels that are significantly less weighed down than before. Bentley doesn’t have a precise weight figure or front/rear weight split it can share. But one peek behind those stocky seats and the cage behind them reveals the empty chasm of a van. Overall acceleration is probably about the same as before – still monstrous, just now audibly so. It’s the first time you encounter a corner that things feel vividly different to a stock Conti GT. A prod of the brakes, a very loud downshift or two, and crikey. This thing really turns. It’s set up like this for Pikes Peak’s numerous hairpins, a much more mobile rear end shaving seconds by allowing Millen to rotate the car into corners. But watch the on-board video of his 10-minute run (embedded into the gallery at the top of this page) and you’ll see he’s not suddenly applying armfuls of opposite lock. In fact, there’s barely a moment you’ll see anything resembling it. This isn’t a drift machine (at least not on the road), nor is it scary. It’s a Conti GT up on its toes and turning neatly, abruptly and – crucially – amusingly into corners. It’s an absolute riot, and not just because it almost literally sounds like one. The ride quality is unaltered on standard, too. You get more of a sense of the road surface beneath you, simply because so much insulation’s been stripped out, but the car isn’t shimmying around over bumps. Here’s a Bentley that’s been hammering HIIT training, sharper and more athletic than you’d dare thought possible. “It shows what this platform is capable of when pushed to its performance limit,” the bloke from Bentley tells us. “We can’t make a regular Bentley handle like that, but it shows what that car can do.” What you’ll also hear in that video are occasional surges of revs as Millen slightly lumpily changes between third and fourth gear. I got this too, but I presumed it was my dim-witted, non-racedriver hands and feet to blame. Clearly it’s just a little reminder this is a Bentley running as richly as possible. And it’s another blot on its refinement card. In short, this Pikes Peak Continental is a Bentley that’s loud, hot and wholly unrelaxing to drive, as well as a little bit smelly. It’s my favourite Bentley ever. I wonder how long I can borrow this cushion for… Score: 10/10 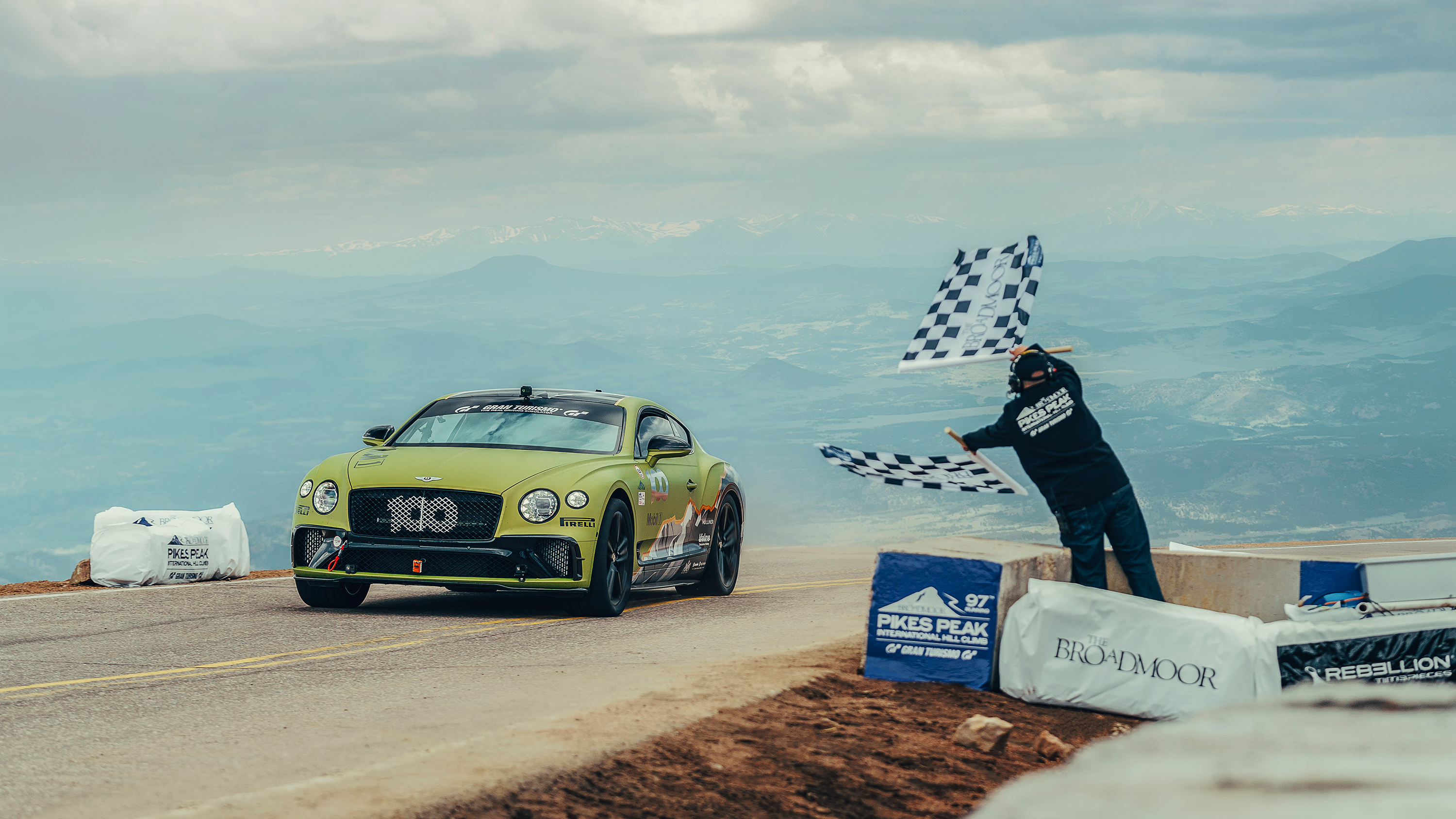