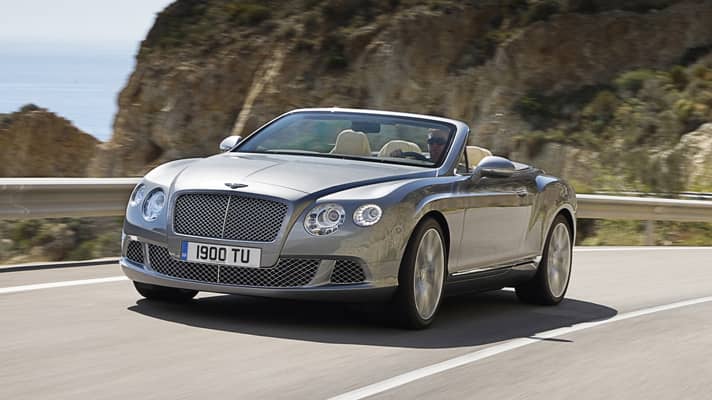 Let's start with stiffness. Not suspension stiffness, body stiffness. No other four seat convertible in the world has such a stiff chassis as the Bentley Continental GTC. Not the Ferrari California, not the Aston DB9 Volante. None. Bear with me here TopGear.commers, because putting aside the benefits this brings to ride and handling, think of the more tangible benefits: no vibrating steering wheel, no scuttle shake, no blurry rear view mirror.

Well, that's the theory, but a car weighing nigh-on two and a half tons can have a mind of its own on a bumpy, bucking road, no matter how stiff it is. 2.5 tons is a lot of force to inflict on a chassis. But the Bentley rarely feels as if it weighs that much - in fact with the roof up it never really feels like a convertible at all.

I'm struggling to think of what advantages the coupe offers over this besides a lower price and perhaps a slightly more elegant roofline. The GTC just makes sense. It's the perfect interpretation of what a Bentley should be.

So what's new apart from the crisper, neater lines? Quite a bit actually. In fact we can put a figure on it - 80 per cent. Yes, 4/5ths of the Conti GTC is new or improved. The car is 40mm wider, has new front suspension, vastly improved interior switchgear and much better refinement. 70kg of weight has also been stripped out. It now has 567bhp instead of a piffling 552bhp. These last two may be drops in the ocean, but Bentley has clearly been thinking things through and the result is greater than the sum of its parts.

New features include a neck warmer that breathes hot air and one of the most comprehensive sat nav systems around - it uses Google maps technology and unlike BMWs similar system, allows you to zoom right in and actually see woodland and buildings.

But these are mere fripperies, mere addendum to the main event - driving the GTC. It won't come as any surprise to learn this is not a car you hurl down tight roads. It doesn't have that sort of demeanour. Understeer will happen and you will rapidly become aware of just how heavy 2.5 tons can be. No, it's the very essence of an 8/10ths car - one that enjoys being driven at a good pace, and rewards accordingly. It's majestic and effortless and searingly rapid in a straight line, accompanied by a distant growl from the W12 engine. The ride is a fraction lumpy at low speeds, but probably still better than anything comparable and as speeds increase it smoothes out. There's not much feedback through the steering or brakes, but you get enough information from the chassis to be able to tell what's going on.

With 60 per cent of torque going to the rear axle (a change from 50:50) it punches smartly out of corners, but is at its absolute best when faced with long, fast sweepers, into which it settles and motors through. It's a car you guide smoothly along, you never clench the wheel or grit your teeth, instead you revel in its luxury, its temperament, and perhaps above all its stability and refinement. Seriously, you would not believe how quiet the GTC is at speed with the roof up. It comes as no surprise to learn the roof is seven layers thick. Nor is there any thump or roar from the suspension and tyres. It's a hell of a way to cover distance.

Or at least it would be were it capable of travelling further on a gallon of gas. Seriously Bentley, when the new M5 does 28.5mpg and 232g/km, 17.1mpg and 384g/km isn't good enough. Even a Ferrari FF is more efficient, and that's saying something.

Enough ranting, because for those that can afford the £150k asking price and splurge another £20k on options, a hefty fuel bill isn't going to be the end of the world. It'll be the manner in which the Bentley accomplishes everything asked of it that'll draw buyers in their droves. Mainly Americans, we suspect.

What of the roof? Well, it's not the fastest in the world, moving at what might best be described as a dignified pace, but it can be done on the move and once stowed, brings a whole new dimension to the car. Driving this thing, roof down, around somewhere glam, warm and coastal is one of those motoring experiences that'll stay with you for donkeys. That's the appeal of the GTC and no-one delivers it better.