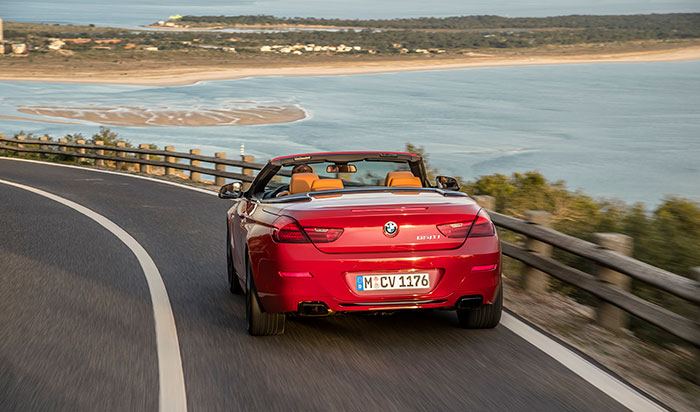 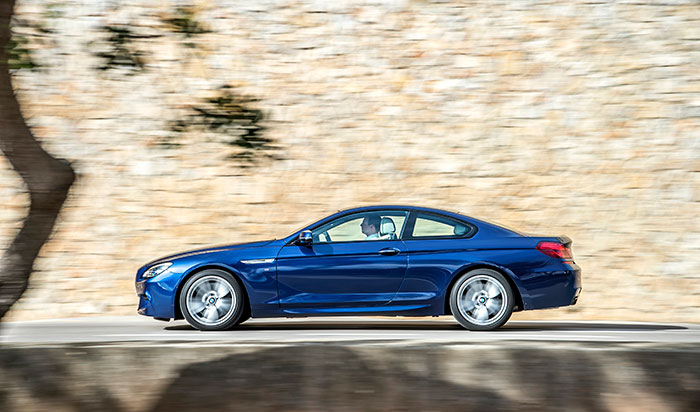 Well, a facelifted one, though give yourself the rest of the day off if you've spotted the tweaks.

Q-car fans will appreciate the inverse snobbery of the new exhaust set-up - the cosmetic twin oblong outlets house two pipes each, so what you're actually getting is four pipes, masquerading as a subtler two. It actually sounds rather tasty too. But more of that later.

Which 6-Series is this?

We drove the 650i model - the big seller in the 6-Series' heartland US market. As per usual, the numbers stuck to the bootlid bear little resemblance to what's actually under the bonnet: 650i equals a 4.4-litre, twin-turbocharged V8.

BMW's M Division engineers get terribly upset if you refer to it as a detuned M6 engine - the flagship M car enjoys all sorts of juicy bespoke bits like stronger pistons and high-performance turbos left on the parts shelf for this car.

That being said, this 650i is hardly lacking in grunt. Serving up 444bhp (up a hefty 42bhp on the pre-tweak 650i), it's lopped 0.3 seconds off its 0-62mph personal best, now dispatched in an M4-worrying 4.6 seconds. And that remains constant whether you opt for the two-door coupe, the soft-top, or the still-gorgeous four-door Gran Coupe.

Economy has also climbed marginally across the range, to a theoretical 32.9mpg for the hard-tops and 31.7mpg in the cabrio.

So it is fast?

Yes. It's not so much the headline power stats that grab you on the road as the 479lb ft torque output - a mere 22lb ft shy of the regular M6. If you're a wafter not a charger, this powertrain will be right up your alley.

While you can climb up and down the eight-speed automatic gearbox to your heart's content by tapping the alloy paddleshifters, the V8 is so muscular you're best off leaving it mooching along in fifth or sixth gear. Never are you bereft of enough shove to roar past the lowly peasants in their 2- or 4-Series.

Speaking of noise, the coupe offers a muted bellow through its trick new exhaust, but the Convertible is a proper giggle. With the roof neatly retracted in 15 seconds (activated on the move for maximum poseur points) you're privy to an amusing collection of snorts from the turbos and old-school crackling during gearchanges and on the overrun.

How is it to drive?

Predictably, this is no B-road monster. The 650i flipping fast (if you're okay with, ahem, 17mpg), but Six's sheer girth is at least two sizes too big for the sweeping Portugese mountain roads on which we drove the car, yet alone your average crooked British route.

And while the high-speed body control is exemplary for such a boat, that inertia is always lurking, waiting to catch up with the cruel reality of physics. As a payoff for the high-speed composure, the ride's also just a touch busy about town too. Not jarring, but you're just more aware of the surface beneath your tyres than you might hope to be.

Far better to toggle the Dynamic Chassis Control from Sport to Comfort (or the indistinguishable Comfort Plus) and mooch about at middling speeds. The 650i is a true pleasure cruiser, not a speedboat.

A few quick-fire niggles. The cabrio's wind deflector does an ace job of looking after your barnet, but it does prohibit access to the back seats. Then again, the rear seating is good only for children and the vertically challenged. Heads of state look elsewhere.

The interior itself is hardly memorable too - it's nicely finished and as ergonomically resolved as an iPhone, but lacking fizz. You could be in that peasant's 4-Series, almost. Some of the i3 and i8's daring needs to drip into the next 6er if it's to continue justifying a £75,000 tag.

And those natty fully digital dials? Very nice, right up until you drop the top and the sun's reflection obscures your revs, fuel gauge and, ah yes, speed. Sorry, officer.

Should I buy one then?

If you're in the UK, the diesel 640d makes infinitely more sense than the lusty 650i. If you live somewhere where space is as plentiful as oil, then the big petrol will be a much better bet. The (two-seater) Mercedes SL offers the coupe-cabrio double-act in one car, and Maserati's GranTurismo is more seductively styled, and badged but suffers a dated interior.

Which leaves the 6-Series in the same rut it's hovered around since BMW revived the badge - a fine but clinical machine lacking that crucial ‘see one, want one' factor.