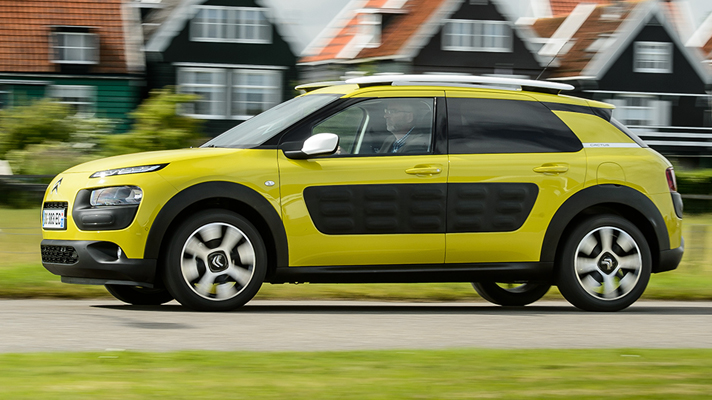 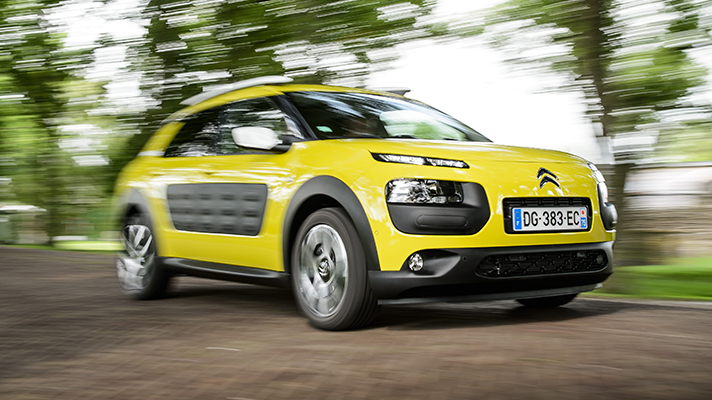 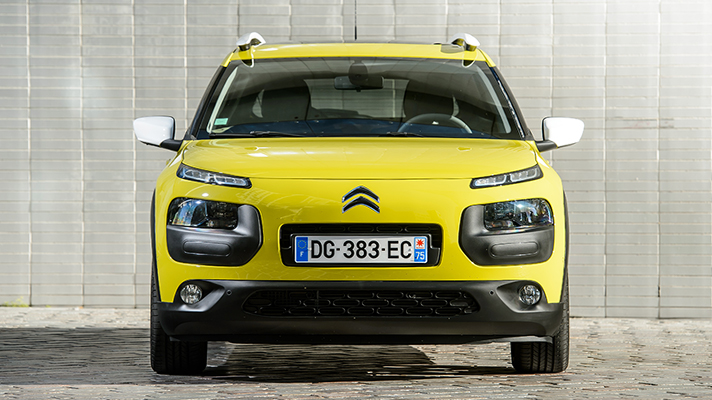 A Cactus. Can it survive hostile environments thanks to its soft waxy skin?

Yup, the C4 Cactus has a unique solution to the biffs of hard urban life. The outside is bubble-wrapped. Or more precisely it has 'Airbumps', oval pads of air embedded in sheets of a soft but high-tech and durable plastic. If an errant supermarket trolley or the door of the adjacent car nerfs the side of the Cactus, it will simply bounce off.

And a Cactus can survive on very little fluid?

Indeed. There's a diesel that rates at better than 90mpg. Even this handy turbo petrol one manages better than 60, for 105g/km. That's partly because of newly developed engines, but also because it's sensationally light – some models under a tonne. And the turbo I'm driving only 1020kg. It weighs less than a Fiesta, but is the size of a Focus.

Very admirable I'm sure. But this isn't the Consumers' Association site. You're not making it sound like much of a Top Gear kinda car.

Then look at it. This is a beautiful piece of true design, wrapping function and desirability into a distinctive form. It cannily marries straight lines with pure curves in a modern but probably dateless way. It's instantly recognisable from a distance, but it bears close inspection too. And refreshingly, it's not at all aggressive. Not sure why they sell this My First Caterpillar shade of toy yellow, because that's the wrong colour. You can get the Airbumps in four shades too, so you'll seldom see two the same.

Isn't it a bit crossover-y?

Well, it has some of those elements – the slightly raised ground clearance, and the protective perimeter. The height is good for visibility and kerb-climbing, especially given the soft suspension. No doubt with winter tyres it would be fine for the odd gravel track. But there's none of the indelible whiff of pointlessness and confusion that haunts every on-road off-roader. It's an honest Focus-size hatch, albeit one with a very different ethos.

Well, it's unashamedly non-sporting and comfort-biased. An immense amount of thought-power has gone into making it a car to relax and soothe you. The result of that objective could have been a car for people who don't like cars. Luckily the opposite has happened.

It has soft springs and small engines – the most rip-roaring of them is 110bhp. With no need for hard cornering, they gave it squidgy, sofa-like seats. You won't find any references to 'cockpit' design in the interior. It's all very homely.

It feels spacious. The dash has been pared right back. There's no bulky instrument binnacle, just a digital plate. No heater controls or stereo buttons – they're all on the central touch tablet. The passenger airbag has, in a first, been displaced to the roof. Result is a distant, minimal dashboard and a huge top-loading glovebox. Instead of bulky padded door pulls, luggage-like straps do the job just as well.

It's refreshingly simple to drive. No complex electronic aids, no difficult decisions, not much power or grip. It keeps your heartbeat low.

That sounds like an excuse for a dull-driving blancmange.

Well, in the melee of everyday roads, there's often more fun to be had driving a slow car briskly than a quick car slowly. The Cactus wallows a bit and rolls a lot, but it always tells you what it's up to and is actually a cheery companion.

And it goes better than you'd think. They knew they wouldn't be installing big heavy diesel engines, or 4WD, or making a hard-cornering GTI. That means they didn't need an over-built skeleton to support those things. Or big brakes or over-specced cooling, or six speeds in the gearbox. So they used the DS3 platform instead of the new Peugeot 308 platform, and with the light powertrain too they saved 150kg. Then saved another 50kg with interior and equipment choices – no split-fold back seat, pop-out rear windows instead of wind-down.

All of which means the 1.2-litre three-cylinder's 110bhp, and the generous turbo torque that comes with it, is actually surprisingly adequate. And you can feel the lightness every time you turn the steering wheel. The tyres never seem to be working that hard. The steering is accurate and willing to turn, but it tracks straight on a motorway too.

Does 'light' translate to 'noisy and tinny'?

Not so much. You hear some white noise as the upper body pushes through the air at speed, but otherwise the powertrain and tyres are quiet. Many of the facia plastics are a bit on the light-and-hard side, but the lovely visual design distracts you. The only significant thing that feels a bit flimsy is the gear lever, which wibbles around a wide and ill-defined gate. You get used to it.

If it's the small platform, isn't it cramped?

The wheelbase is stretched, so there's legroom for everyone. It might be a bit narrower than the Golf-class norm, but the front seats are wide. Because the back windows don't wind down, the door inners are carved out for your elbows. Anyway, even big cars seldom have a ride this supple.

You seem to be liking it. A lot. Any downsides?

I mentioned choices. All the way through, the designers have been careful to save weight and cost in some little-noticed areas so they can re-invest where you do notice. That means you might miss the split-fold rear seat or wind-down back windows. If you do, get a C4 Picasso. In the Cactus, that weight has been shaved, and that cost re-invested in, say, the Airbumps, and for the driver and passenger in interesting trim and the standard colour tablet. The cushioning seats are generous and welcoming to begin with, but after a few hours you might want more support.

When can I get it?

UK sales start in October. It cost from about £13k, for one that has pretty well all of the looks but is low on kit and power. A full-houser will be £18,000-ish. That's really very reasonable given that the Cactus actually reminded us of a Rolls-Royce Phantom.

Not entirely. Sure, the Phantom operates in an entirely different universe of size, power and refinement, but its basic tenet is to keep you serene. It rides softly, and doesn't encourage hoonery. And for the most part its interface keeps things simple rather than throwing a forest of controls and configuration options in your face. In those things at least, there are echoes in the C4 Cactus.