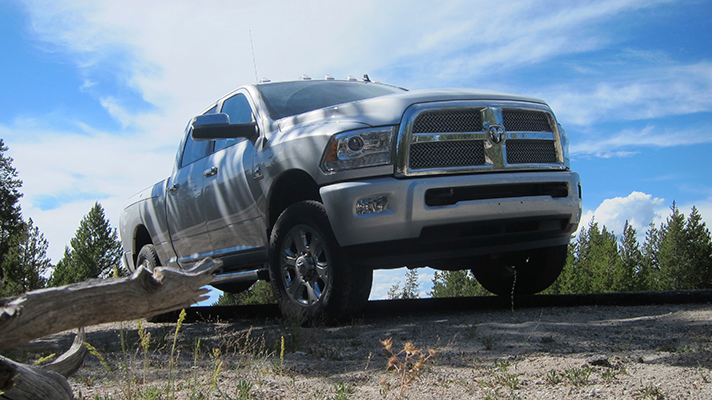 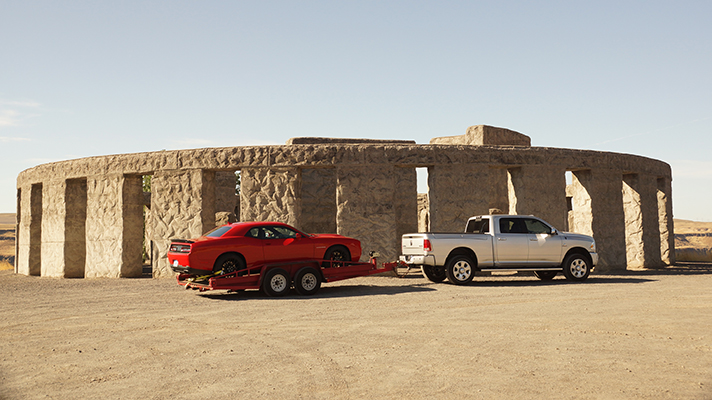 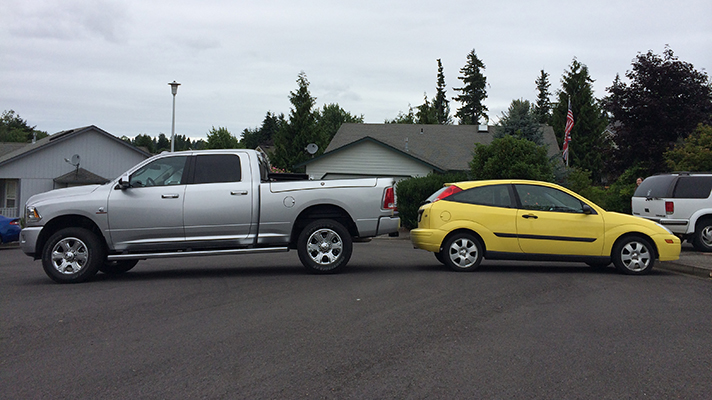 Mother of whatnot, that's a huge truck.

Yes, yes it is. So big in fact that in America all pick-up trucks have their own zip code.

No, not really. But it is huge, so huge that I'm going to open with some stats. I apologise in advance if you are American and these numbers don't strike you as somewhat other-worldly. To us Brits they're mind-boggling. The Dodge Ram 2500 is 6.3 metres long, 2.1 metres wide and 2.0 metres tall, so shades about the same amount of road as a Rolls-Royce Phantom, but double the height. Or something.

Anyway, it weighs about 3.5 tonnes, can tow 7.7 tonnes and is basically a commercial vehicle. We used it to tow the Dodge Challenger Hellcat to the amazing Maryhill Loops road in Oregon, but that mention didn't really do our time with the Ram justice, hence why I'm telling you about it here.

What's it powered by?

Well, you can have your Ram with a V8 HEMI engine, but this one had something better: a diesel. Yes, I know that sounds wrong, but if you want your Ram to work and work hard, surely it's best when powered by something that develops 800lb ft of torque at just 1,600rpm?

The 6.7-litre Cummins six cylinder isn't the last word in civility, but that's not the point here, it feels as if it could haul the Titanic from the deep - without troubling to switch to 4WD. Apparently the engine alone weighs 499kg, which makes it heavier than our entire Caterham Seven 160 lifer.

For the first two days, absolutely terrifying, even in America where the parking spaces are 10 feet across and the interstate lanes are as wide as runways. I kept losing small cars - by which I mean things like RAV4's - below the bonnet (OK, hood), like little bugs trapped in the grille. On top of that the throttle was less than responsive to commands and the steering lock was utterly hopeless. I picked it up in Seattle, where the enlightened residents have taken to Tesla and Prius in a big way, and the Ram felt a little at odds with their sensibilities. Just a tad, you understand.

But then you got to grips with it?

I did. It may seem obvious, but you realise that it's not a car, it's a utilitarian vehicle, and you start to treat it like one, to find tasks that scratch the surface of its abilities. Towing, for instance. We hauled the Dodge Challenger Hellcat from Portland to Maryhills, and trailer and muscle car made precisely no difference to the Ram's performance or cruising ability. Every time I accelerated I had to check the trailer was still attached. Then at the Loops road we bumped into Zane and his long-boarding buddies and it made perfect sense to throw youths and skateboards into the back for the ride to the top. And bit by bit I started to adore this thing.

Pickup adoration? From a Brit?

Oh yeah, completely. It's easy to criticise them from our side of the pond, but over there every pickup I saw was doing something that an estate, SUV or MPV wouldn't have been able to: hauling motocross bikes, people, timber, animals, huge trailers full of livestock, whacking great caravans. In America pickups blur the lines between cars and commercial vehicles in the same way a Transit doesn't quite in the UK. They are the missing link.

So what else did you do with it?

Used it for viewing wildlife in Yellowstone, hauling ski gear up to Mt Hood in Oregon, filling with bikes and luggage, giving kids a ride around a park. You'd think that last one would be illegal, but the kids waved at cops we drove past and they waved right back. And perched up in the crows nest driving position, swaddled in French leather (that's what the brochure said) and rear view cameras and vast cubbies and complex infotainment menus and cheap plastics and plentiful space, you felt so utterly isolated from the world outside it was, well, unreal. Until you fired up the diesel, that is. It's not the quietest or most sophisticated...

I doubt it. But in the pickup hierarchy, toughness counts for more than refinement, and I reckon the Ram 2500 is as tough as they come. And it wasn't a pain to do distance in - the 20-inch wheels are wrapped in wonderfully plump, bulbous tyres that do the cushioning the suspension fails to, and the Ram's sheer scale commands you to adopt a specific driving style. You send signals via the cabin controls and a bit later and a long way away, something happens. Vaguely. You get used to it, but don't go trying to nip into gaps in traffic.

Any other useful features?

The Ramboxes. These are cubbies over the rear wheelarches, flanking the load bay. Each is as big as a supermini's boot, weatherproof and lockable. My favourite gadget was remote start - press a button on the keyfob and you could start the Ram without unlocking the doors from a distance of about 100yds. You knew it had worked because you could hear the engine at that range. Useful for cooling down black seats on a hot summer's day.

There were also some features I didn't mess too much with. One sliding switch adjusted the braking force to the trailer, another button adjusted towing height, it even had a proper three-pin plug input. On the dash. The thing that completely threw me was the DEF gauge. I now know what Diesel Exhaust Fluid is. I had to buy some and top up a secondary fuel tank (DEF is a urea solution that reduces particulate emissions). You don't have to worry about this sort of stuff in a BMW 320d.

About 400 miles. The bigger question is what it did to the gallon. When towing the Hellcat, 12.9mpg (these are UK gallons, not US), about 19-20mpg otherwise.

What options are available?

What options aren't available, that's the question. The Ram 2500 is the mid-range model, there is also a light duty 1500 model and a heavy duty 3500. The 2500 itself is available in ten trim levels with several cab options, two gearboxes and this diesel alone comes with a choice of three power outputs. That makes speccing a Ram more complex than nuclear physics. Fact.

I've given this a lot of thought and there's only one thing in Europe that comes close -the 6x6 Mercedes G-Wagon. And that's hundreds of thousands of pounds. This Ram 2500 with all the whistles and bells costs $55,710 - about £35,500. It's a bargain. It's also wonderfully fit for purpose. And that, at the end of the day, is what matters.