£376,048
Read why you can trust our independent reviews
Top Gear Team
Published: 13 Jul 2020
Skip 21 photos in the image carousel and continue reading 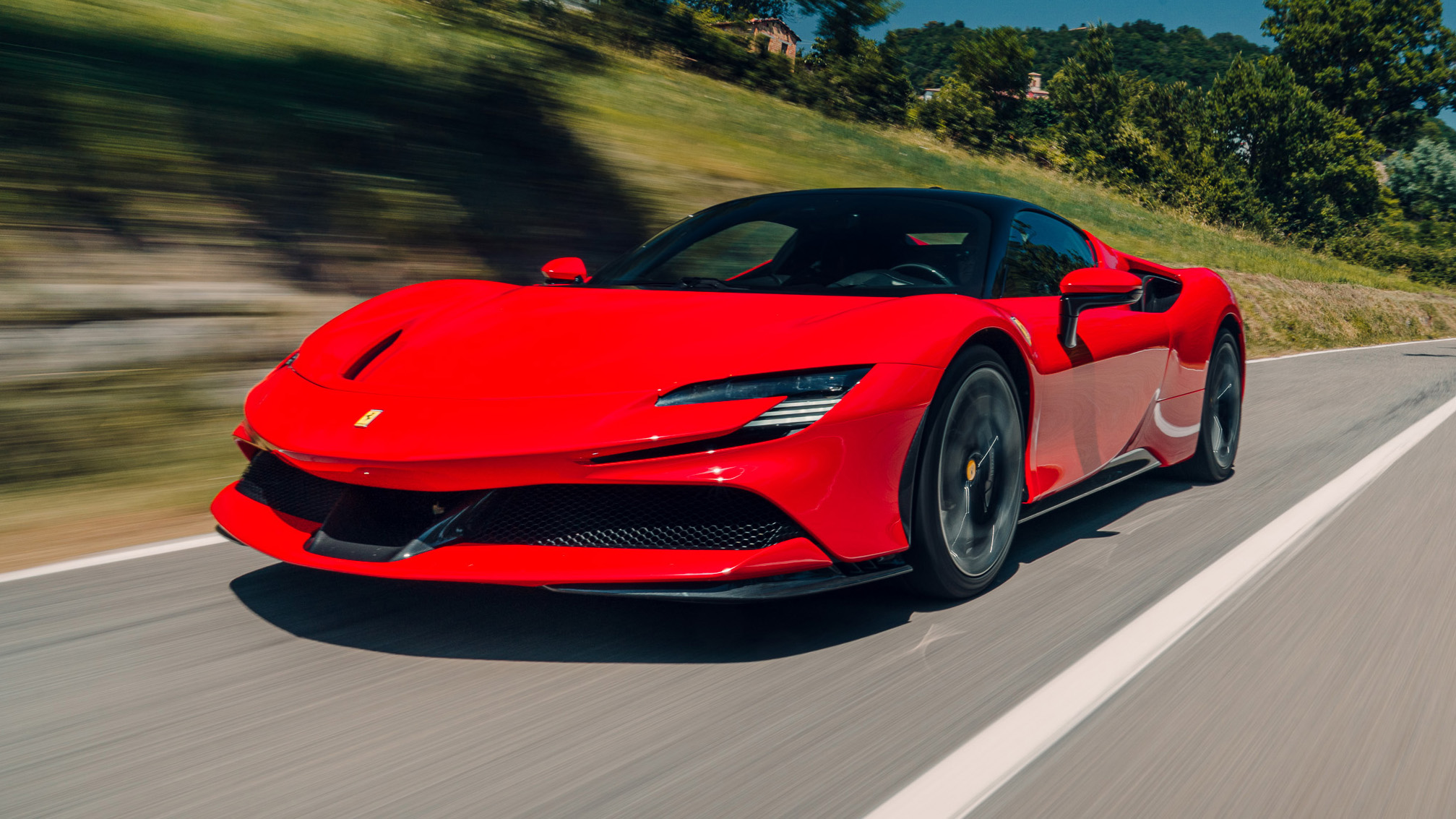 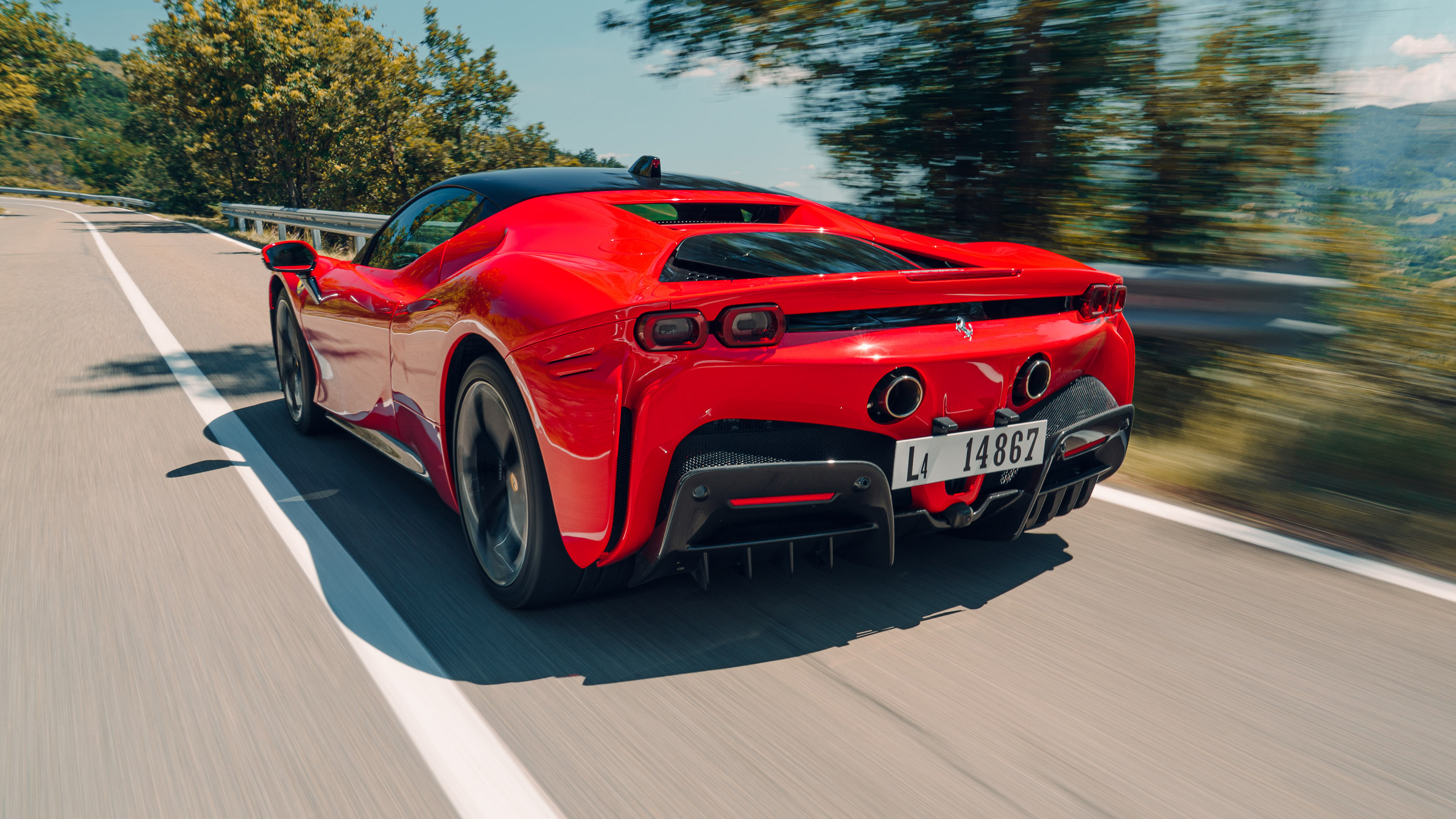 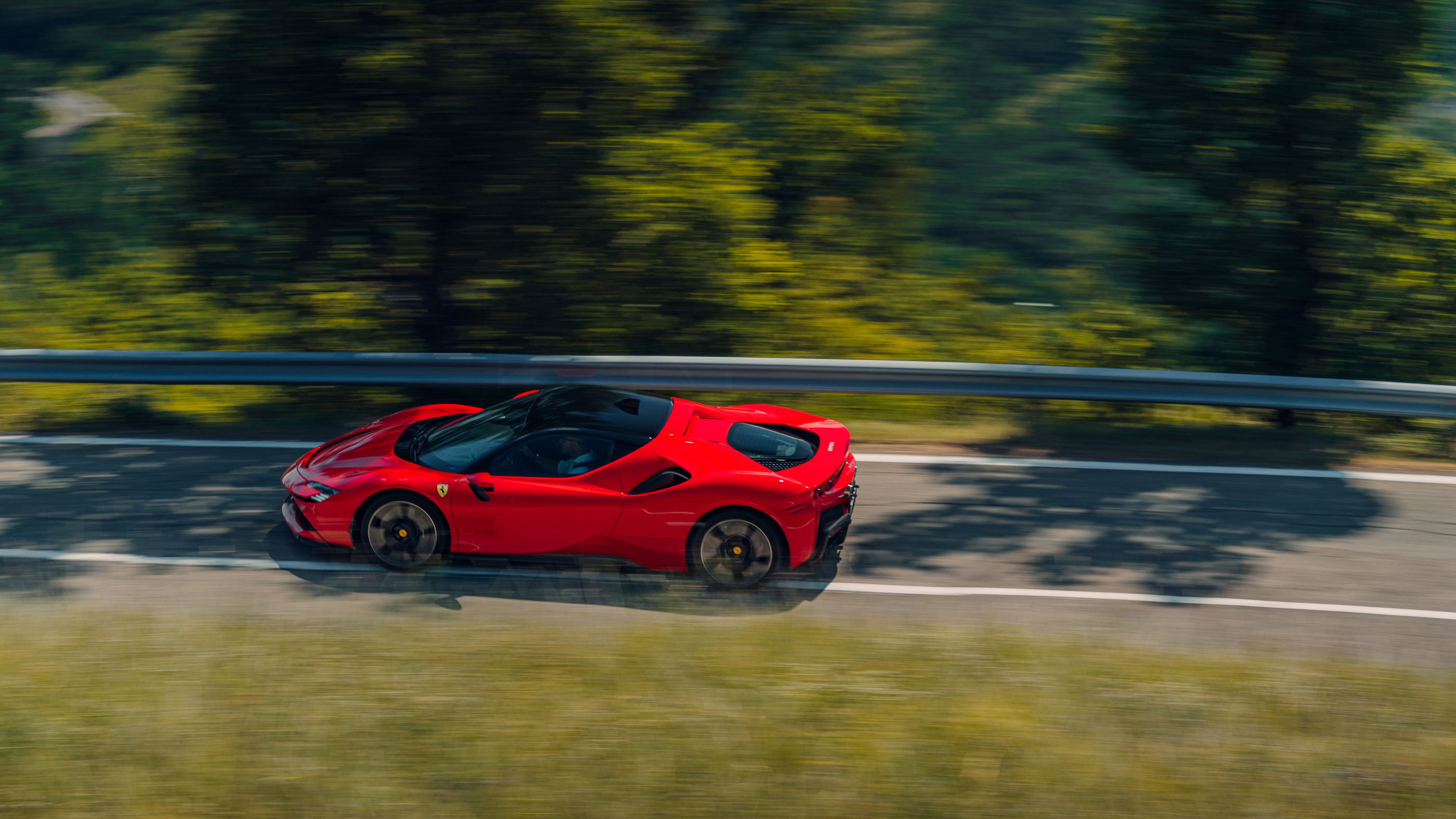 1 / 21
Advertisement
“As an object lesson in corralling the discordant forces of petrol and electricity, it’s stunning ”

Don’t be fooled - a handful if you turn the traction off, not much luggage space

Depending on how you see Ferrari, the SF90 is potentially controversial. It’s the firm’s new flagship, but isn’t powered by a seminal V12. Nor is it an only-available-to-collectors limited edition. It’s 4wd. There are three electric motors. You can plug it in. It starts silently, and it can drive silently. There’s never been a Ferrari that can do that before. Nor has there been one where the brake pedal isn’t directly connected to the callipers. Or one without a mechanical rev counter behind the steering wheel. There isn’t even a reverse gear in the gearbox – but relax, there is one elsewhere.

And yet this is Ferrari’s fastest, most powerful road car ever. Quicker around the Fiorano home circuit than the LaFerrari, delivering 986bhp (that’s a metric 1,000hp) to the road – the same as a Bugatti Veyron, but with basically half the engine capacity and turbos, and weighing several hundred kilos less. So yes, it’s fast – 0-62mph in 2.5secs, 124mph in 6.7secs – the latter figure 1.5secs ahead of the F8 Tributo, and in the same league as the Koenigsegg One:1 and McLaren Senna, both of which are in a different price league.

It’s a crossover really, bridging the gap between supercar and hypercar. Hypercar performance, supercar price. Well, not really. In fact it’s probably the most any firm has ever dared to charge for a non-limited edition model: £376,048. Plus all the options. You’ll do well to escape having spent less than half a million once Ferrari has talked you into the weight saving Assetto Fiorano pack (30kg removed for £39,360) and a comprehensive carbon strategy.

This is what comes as standard. An aluminium (not carbon, aside from the rear bulkhead) chassis that has some commonalities with the F8 Tributo, but is 20 per cent stiffer. The internal combustion engine is also similar to the one in the F8, and maybe the proportions haven’t changed that much – which might lead you to start wondering where your money’s going when the price has almost doubled. So let’s dig a bit. Take the engine. It uses the same basic block, but pretty much everything – turbos, inlet and exhaust manifolds, the entire, radically different cylinder head, crankshaft, pistons – is new. It’s direct injection. That’s a first for a Ferrari V8. It’s wider bore. Delivers another 59bhp for a 769bhp total. It’s 25kg lighter than the F8 engine, and mounted 50mm lower in the chassis. When you open the cover and look down at it, it appears to be subterranean. The exhaust is made from Inconel, like an F1 car.

The aero is so sophisticated Ferrari has two patents pending, one for the vortex generators in the airflow under the driver’s feet (which have been lifted 15mm to make way for them), another for the rear wing, which doesn’t pop up, but instead drops a centre section down to block airflow from going through the low drag slot. 390kg of downforce at 155mph. Then there’s the terrifyingly complex electronics: an electric motor for each front wheel and another between engine and gearbox. It’s 4wd up to 130mph, but above that the front motors are disengaged and all the power that went to them is instead directed to the third motor – so you have nigh-on 1,000bhp through the rear wheels alone.

The gearbox has an extra ratio (eight forward gears), yet is 10kg lighter. That’s chiefly because there’s no reverse in there – reverse is handled purely by the electric motors on the front wheels. On the back deck you’ll find twin filler caps for fuel and electric – the battery isn’t huge, a 72kg bar that sits across the chassis behind the seats and has a 7.9kW capacity. Ferrari claims a 15-mile range. But the SF90 isn’t only about knocking around in electric mode, it’s about the benefits electricity can bring to the driving experience: the front axle’s ability to deliver power exactly when its needed, the traction advantages, the acceleration boost, the instant torque while the turbos are getting into their stride. That’s what a hybrid system can deliver. Well, that and another 250-odd kilos of weight.

Beyond that, Ferrari is candid that the learnings from the SF90 will go directly into the next generation of road cars. This will not be the only Ferrari to drive itself electrically. Instead it’s a glimpse into the future – even if it could be argued the technology doesn’t seem that different to the systems fitted to the Porsche 918 Spyder six years ago (another plug-in with electric drive to the front axle and a V8 powering the rear). But that’s not to say things haven’t progressed… 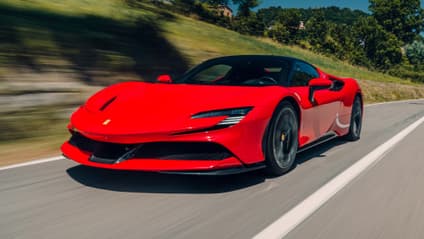 “As an object lesson in corralling the discordant forces of petrol and electricity, it’s stunning”

The significance of the SF90 cannot be over-stated. The LaFerrari was a toe in the hybrid waters. This is the running jump. It’s Ferrari’s flagship, the one from which learning will cascade down, and it’s the biggest direction change, the most sweeping embrace of new technology in living memory, and one of the most important cars ever to emerge from Maranello.

As preparation for what lies ahead it’s spot on, although there’s no denying that part of what lies ahead is a lessening of the internal combustion engine’s influence. Ferrari has mastered the technology, but it hasn’t managed to make electricity sound or behave differently to anyone else. But for now, there’s nothing else out there like it, which puts Ferrari in a commanding position ahead of its rivals.

As an object lesson in corralling the discordant forces of petrol and electricity, it’s a stunning machine. A 1,000bhp hybrid that is approachable enough to be driven hard with confidence, is nimble, controllable and delicate in your hands. This is no thousand horsepower sledgehammer, even if it packs that punch up every straight.