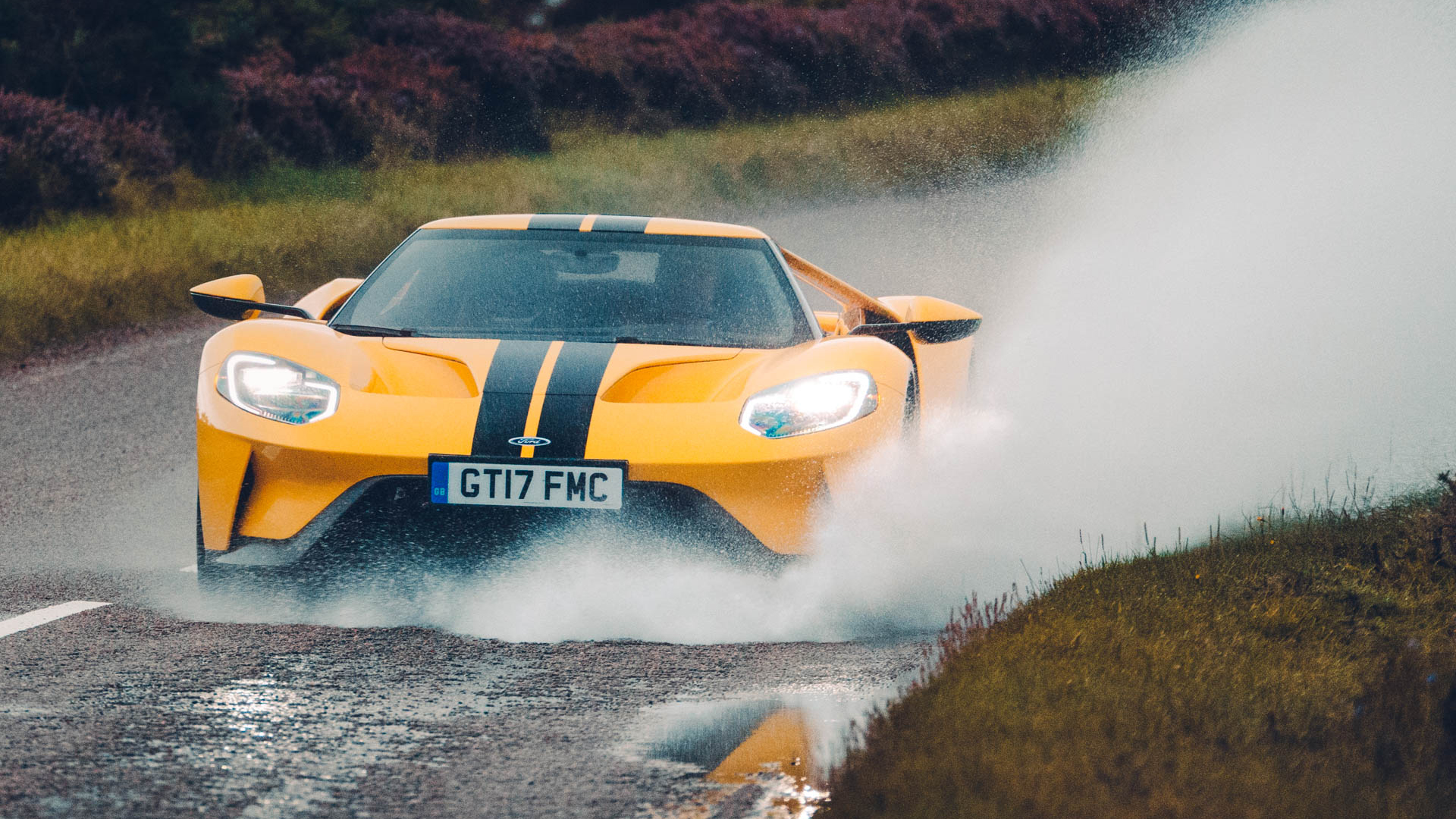 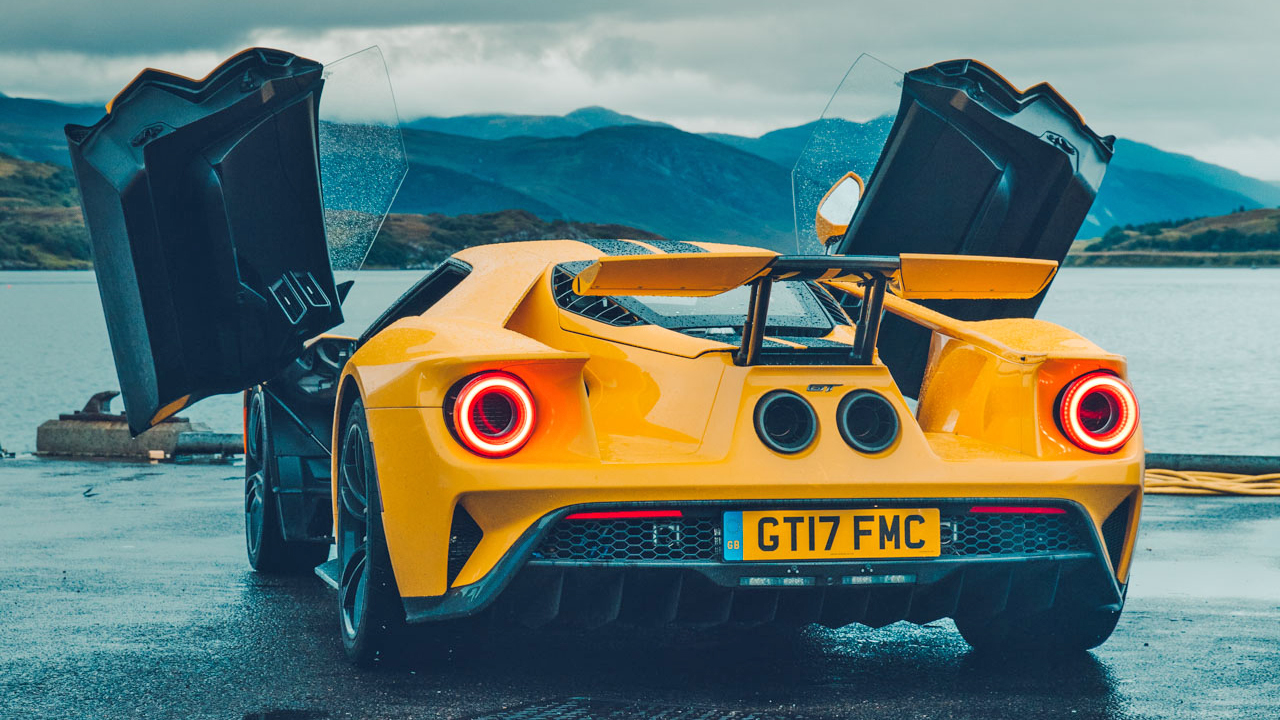 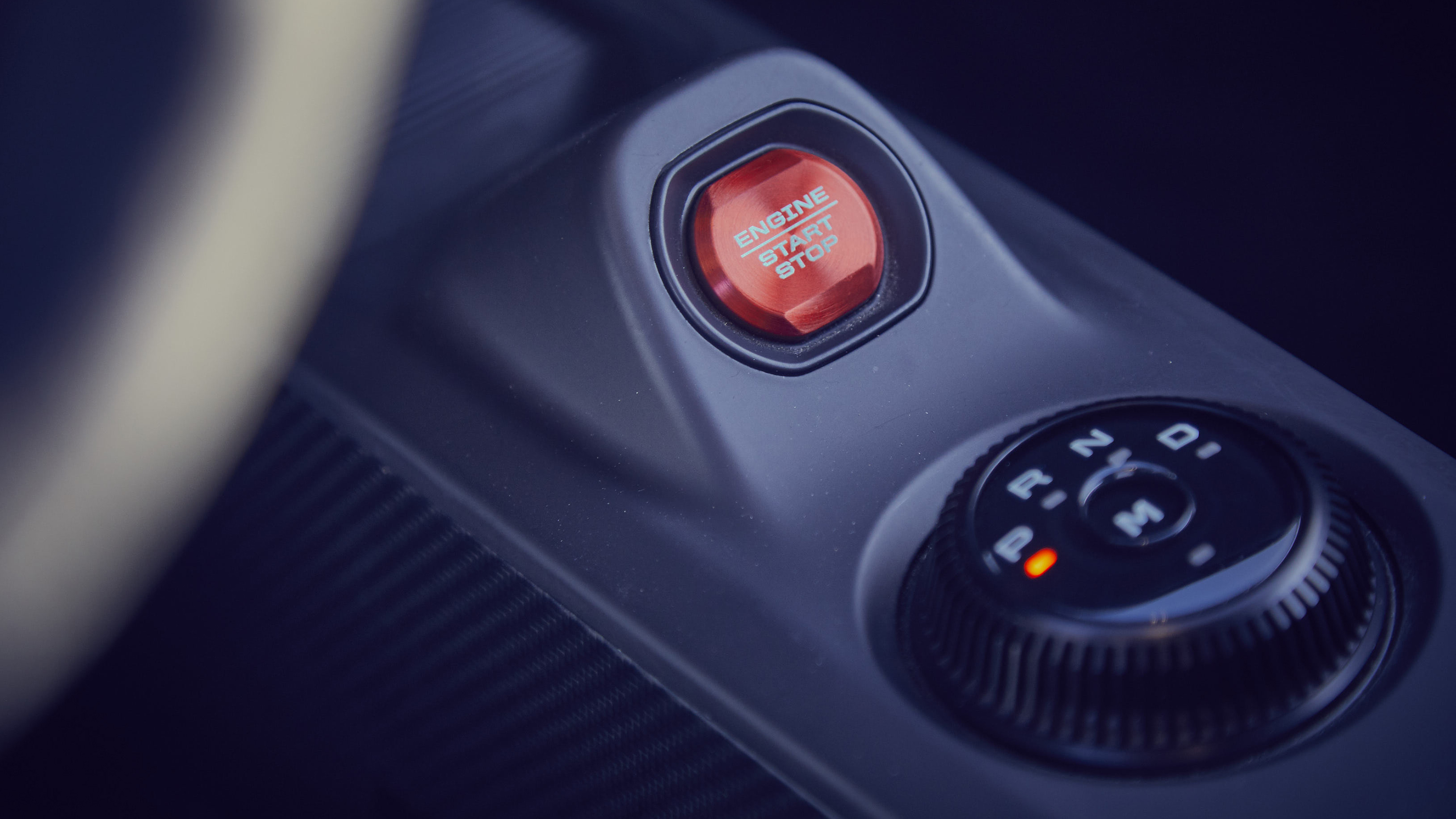 Is the Ford GT meant to be a road car?

Well... Ford claims the GT was developed as a racer as much as a road car. And to be fair to them, it’s one of the very few cars where that claim rings true. On British roads this does actually feel like a racer – which is both a good thing and a bad thing.

What are the vital pub boasts?

Full carbon tub, fixed seating position with a pedal box that slides to find your feet and a body that’s designed to be aero-efficient as well as delivering downforce.

There are inboard dampers, carbon brakes, a 50mm-lower, ground-scraping Track Mode, 0-60mph takes three seconds flat, the top speed is 216mph, the dry weight is 1385kg and the boot measure a ‘generous’ 11 litres. Sounds like a race car, doesn’t it?

Certainly not a lot of space for luggage.

No, and if you do put anything in the small compartment aft of the engine, it had better not be butter. Or possibly even a laptop. Things melt in there.

But then I expect it was fairly far down the list of priorities. The mission for the Ford GT was framed by a desire to win Le Mans. So the aero package was the number one priority, and that led to the fixed seating position and the oft-criticised V6 Ecoboost motor.

Does it look that wild in the real world?

It looks way, way madder. You can’t believe how low it is, how big those air channels are, how the cockpit tapers… you end up just walking around it, being bewildered by the thing.

And yes, getting in and out of Track mode is funny because it pops up and down so fast, but you don’t actually use it that often. You do use nose lift a lot though, and that’s almost equally amusing, with a similarly dramatic pop up from the hydraulics. McLaren’s system takes about 15 seconds to do the business. This is way more efficient.

And how about the cabin?

It’s a racing car. There’s a lot of bare carbon and little attempt at providing creature comforts or luxury touches. It does have a reversing camera and air con, but don’t go looking for surprise and delight features. Crisp functionality is what the Ford does best – the operation of the thumb wheels on the steering is a particular highlight.

I wish the same could be said for the seats. For a car of this attitude and focus, they’re too soft and lacking in support. I’m guessing they had to be like this to, ahem, accommodate the typical buyer, and yes, you can have full harnesses to lock you in place. But to really convey what the car is about the chairs need to squeeze your hips more, hug your ribs, perhaps tilt your thighs up – and ideally mount you slightly lower in the car.

But that’s it. Of course it would be nice if it had a kickass sound system (it’s pretty tinny and can’t match the V6’s volume) and a superlative infotainment setup. But none of that offended me because this is a Ford GT. It’s not about the tunes, dammit.

So how is it on UK roads?

It’s not a supercar that you can rest an elbow on the armrest and biff about in. It doesn’t appreciate city driving nor worry about making a hash of it. Wherever and whenever you drive it and no matter what the conditions (and we drove it in just about all of them), the Ford GT is only concerned about speed. Going faster. Attacking a road.

Recalcitrant. Grumpy. The engine drones through the bulkhead and it soon becomes wearing. In many ways it’s not too bad. The turning circle is good, the set-back A-pillars give you a wide field of vision forward, the engine pulls cleanly on small throttle openings and the pedals operate easily. Same applies to the rotary gearknob.

The brakes are astonishing. You need to be careful with them at low speed as they aren’t designed to do their best work in queues of traffic, but as far as high-speed confidence goes, these are unsurpassed in my experience. Vast power, near-perfect pedal feel, they stop the car imperiously well. Which is good news for panicky stops on a motorway.

How about the rest of its motorway manners?

It gets bored. So do you. And then you might start thinking you can drive while resting your elbows, but a fraction after that you’ll hit some standing water or a deeper truck rut and instantly realise that you can’t relax. The engine isn’t too bad, but you can tell Ford’s energies were focused on the chassis and aerodynamics, and the engine’s role was to deliver the necessary force and energy.

This is not an engine that is fussed about building to a crescendo, it’s just doing a job. The force in your back is mighty, but progressive. On the road you rarely go much above 5,000rpm. The turbos have delivered enough to open your eyes wider by then.

Above that you’re into the silly sphere where roads suddenly become much narrower and brain processing speed becomes an issue. You’re not missing much by drawing a line at 5,000 – the experience is broadly the same, the intensity just creeps up. But this is not an engine that delivers the same scalding top end as a McLaren 720S or the nape-curdling scream of a Lambo V10.

Not much attention seems to have been paid to the engine note; it drones if held at constant revs, and at other times is raw, loud and unfocused. Listen to onboard of most Le Mans cars and you get this sense that they’re just developed to get from one place to another as quickly as possible, and that’s the same with the Ford.

It makes a lot of noise, but has none of the theatrics and tonal definition you get from most road cars. Acoustic harmonisation? Not in the Ford GT dictionary.

Is that a drawback?

If you measure your thrills in traditional ways, yes. But if you approach the GT with the mindset that you’re driving an actual Le Mans racer, not just a common-or-garden supercar, you view it very differently. Now it feels RIDICULOUS. You tune into its wavelength, its focus on speed, and it becomes fantastically absorbing. Of course you need to be on the right kind of road, and, no, a motorway is not a good stand-in for the Mulsanne Straight. I’m talking a good, well sighted country road.

You can’t relax, but maybe the GT isn’t quite as camber sensitive as you first feared. You just need to be alert to what it might do. Initially it made me tentative because it’s personality is so strong and uncompromising, but as I built up more seat time, I formed a deeper bond with it. And I came to realise the GT has perhaps the most talented, brilliantly balanced chassis of any car on sale today.

Isn’t that what you found when you drove it on track?

Yep, when I drove it at Laguna Seca earlier this year (Ford GT car review) I was astonished by how controllable and adjustable it was, how the handling favoured neither front or rear axles, but instead gave you a hint of push at the nose to let you know it was working hard, but otherwise worked all four tyres evenly.

It scorched around corners with no roll, absolute control and rock solid stability. If you wanted to be daft it would slide far more deftly than you might expect, too. It was a driving weapon.

The best possible news is that the GT gives you the almost all the same sensations at road speeds. The chassis doesn’t have to be working hard to reward. Just turn the steering wheel. It may be weirdly shaped, but it’s hydraulically assisted and serves up real, genuine feedback.

Even on hectically surfaced British B-roads, its manners aren’t as sharp and jagged as I expected. It rides expensively – minimal travel, instant control, crisp yet supple. The damping platform means it carves clean lines and reacts smoothly and positively to all but the worst mid-corner bumps.

Just don’t overdo it. Don’t get lulled into a false sense of invulnerability that cars more talented than you can often bring. Don’t use that extra half inch of throttle, don’t take risks with braking distances. Not on rough or wet surfaces. Never forget what the Ford GT was developed for. Clue: it wasn’t to be the ultimate weapon to tackle the B4009. If it gets rough, back off or things can get sketchy. Also: Michelin Pilot Sport Cup 2s are incredible tyres. But not when asked to cope with a three-inch-deep puddle.

It’ll be massively absorbing, but… Look, I found it an amazing experience, really special, because it felt so exotic. No other supercar is closer to being a racing car, very few provide remotely as much tactility and feedback, equally few feel as expensively engineered. This isn’t the playing field it was designed to dominate, but my gosh it handles awkward road driving far better than I ever expected. You may not be able to fling it about with abandon, but you can get a lot of satisfaction from it. And then take it to a track to see what it’s really capable of…