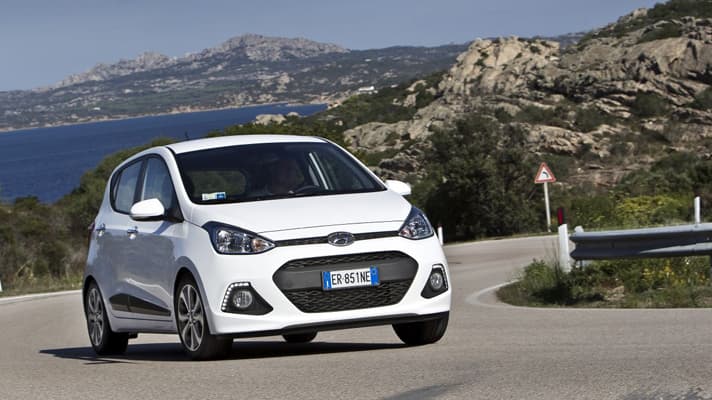 Europeans have fat fingers. At least, they do according to Hyundai, and this bothers them. A lot.

As such, Hyundai's Perceived Quality Team (yes, it does exist) has worked out that if a Korean designs and engineers a doorhandle, it's generally a bit smaller and more suited to slender Korean digits - European fingers might not be able to grasp it properly. So the presumably large-fingered PQT is sent in to test the i10's doorhandles. It needs to work as a global vehicle and shortcomings will not be tolerated.

This is a serious point with wider implications. Because the PQT doesn't just look at doorhandles. They poke and prod at all aspects of the i10 to make sure that it looks, and crucially feels, the right quality. So there aren't any exposed screw heads in the car (unusual at the budget end of things), there isn't any cheap metal on show in the cabin and all the ergonomics are spot on. It's all because Hyundai knows that it can't simply offer value for money any more - rivals are doing the same, so Hyundais need another point of differentiation. This car needs to stand out because it looks and feels good.

Has it worked? Very much so, but more on that later, because we should really tell you about the engines first. The i10 comes with two petrols - either a 1.0-litre three-cylinder, or a 1.25 four-cylinder - and no diesel (Hyundai won't offer one simply because not enough people would buy it). The 1.25 is a straight carryover from the last car, but the smaller engine is the interesting one. Partly because it will get 60 per cent of sales, but also because it's been more heavily revised. It's got an offset crank, the valves and tappets are coated in high-tech diamond-like carbon, the con rods have been lightened and the piston rings have been treated to make them much more durable.

Not that any of this has transformed it into a raging powerhouse. The three-cylinder only produces 65bhp and 69lb ft - good for a 14.9 second 0-62mph time and a top speed of 96mph. Not exactly scintillating, but it doesn't matter. It has got just about enough poke to keep up with motorway traffic, and it's perfectly punchy at urban speeds. Which is what a city car needs to do.
And besides, the three-cylinder thrum is entertaining, and reason enough to buy the cheaper 1.0-litre over the larger motor.

Our only criticism would be the long fifth gear, which means uphill drags on the motorway turn into just that - anything with a long gradient is a fourth-gear job. But the flipside is that it improves fuel economy, so you should get close to the claimed 60.1mpg - we were thrashing it and still got over 40mpg.

Interestingly enough, neither engine comes as standard with stop/start. Again, Hyundai has been ruthless with costs. Stop/start requires more engineering bits, and so costs more, and most customers are happy with the CO2 emissions as they are. Net result is that Hyundai offers a stop/start i10 called the Blue Drive, but not only is it £300 extra, you only get four seatbelts, as opposed to the normal i10's five. Which seems like an odd thing to remove, but is all to do with maximum load ratings on the tyres.

The most impressive aspect of the i10 is the refinement. Hyundai bangs on about it bringing Ford Fiesta-class qualities to the city-car sector, and it's easy to dismiss this as an ad strapline, but it is true. This is not a tinny car; if you slam the door, it's got a VW-esque thunk. Wind and road noise are both well supressed. In fact, Hyundai and the PQT have gone to some impressive lengths in order to make the i10 as quiet as possible. They've even moved the radio aerial towards the back of the roof. This is as refined as any city runaround.

The big-car sensation extends to the chassis as well, because it feels very grown-up. For which you can thank the i10's all-new platform. This is Hyundai's VW moment, the start of a platform-sharing process that will see the next-gen Kia Picanto getting the same underpinnings. The good news is that the future is looking rosy - the i10 is mostly comfortable (only the odd really harsh bump can upset it), and it's capable of cornering at surprisingly high speeds. Chuck it in, watch it stick - there's never any fear of it falling over. B-road, motorway, town - the i10 will manage it all. It makes it much more than just a city car.

But maybe it's a bit too mature. It's missing a little bit of character - something rivals like the Fiat Panda have got in spades. The PQT might have got the European finger size worked out, but it hasn't quite got the European sense of fun sorted yet. This is our only major criticism of the i10 - that lack of a slight quirk means it's not as vibrant and fun as we'd like. The cabin is brilliantly clear and well-made, but it's lacking a little design touch to lift it. The exterior looks great, yet the same effort doesn't seem to have been applied to the dash.

But none of this matters in the real world. Hyundai has absolutely nailed the brief of making the i10 a more comfortable, multitalented B-segment car. It looks much better than the old one, it's more refined, it's just as cheap (£8,345-£10,495) and it's got a five-year warranty. Plus, it works with European fingers.