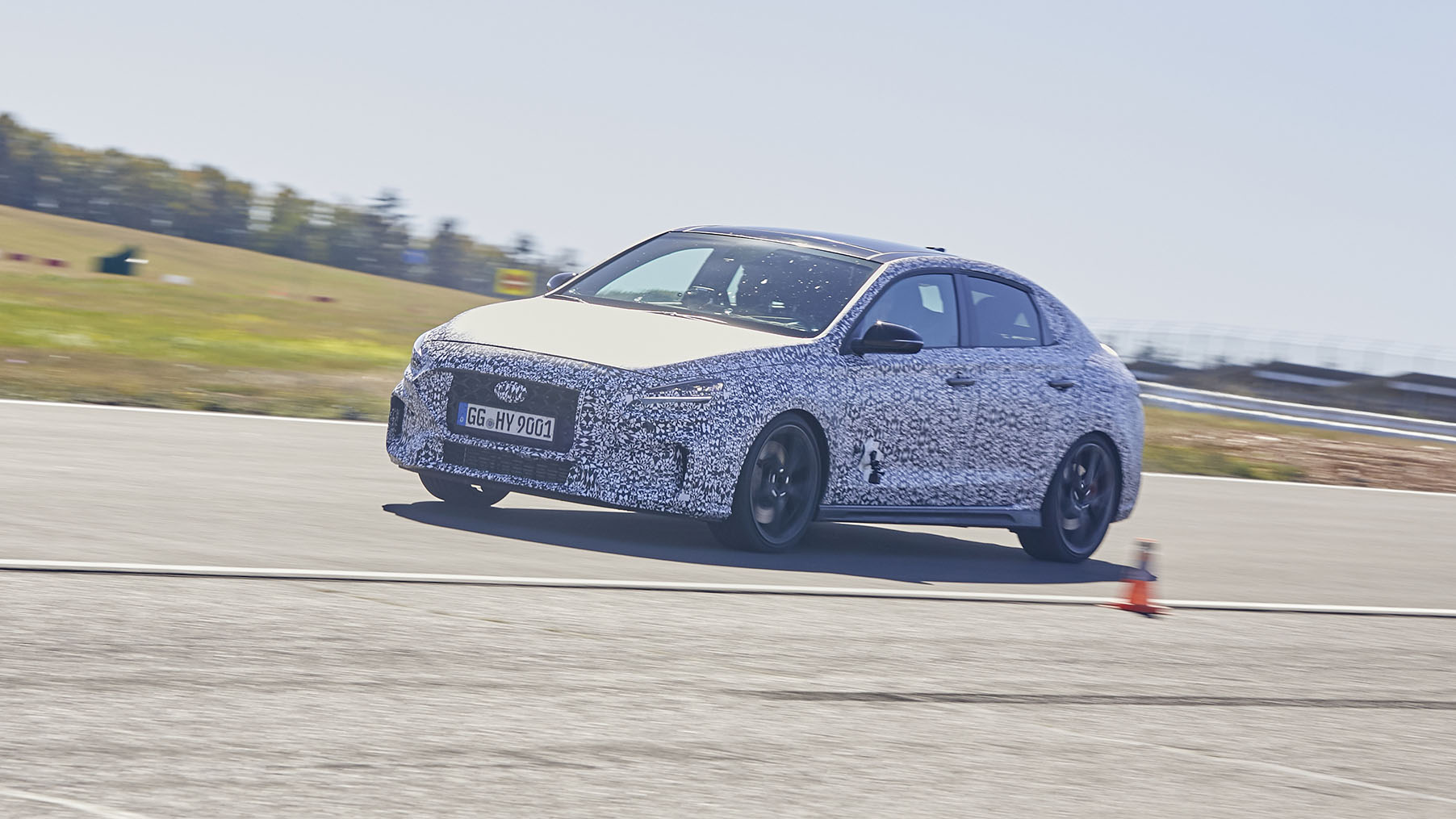 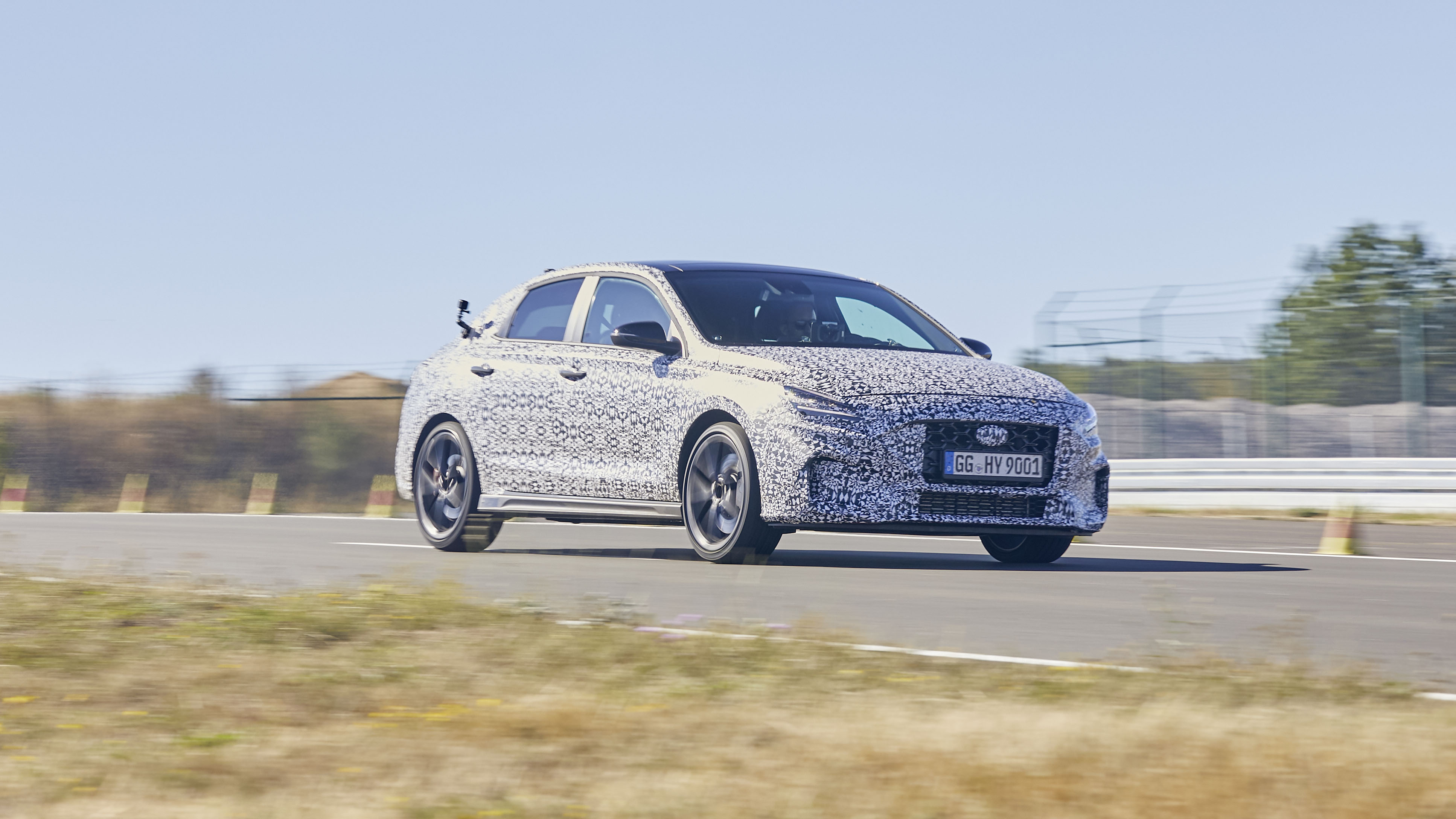 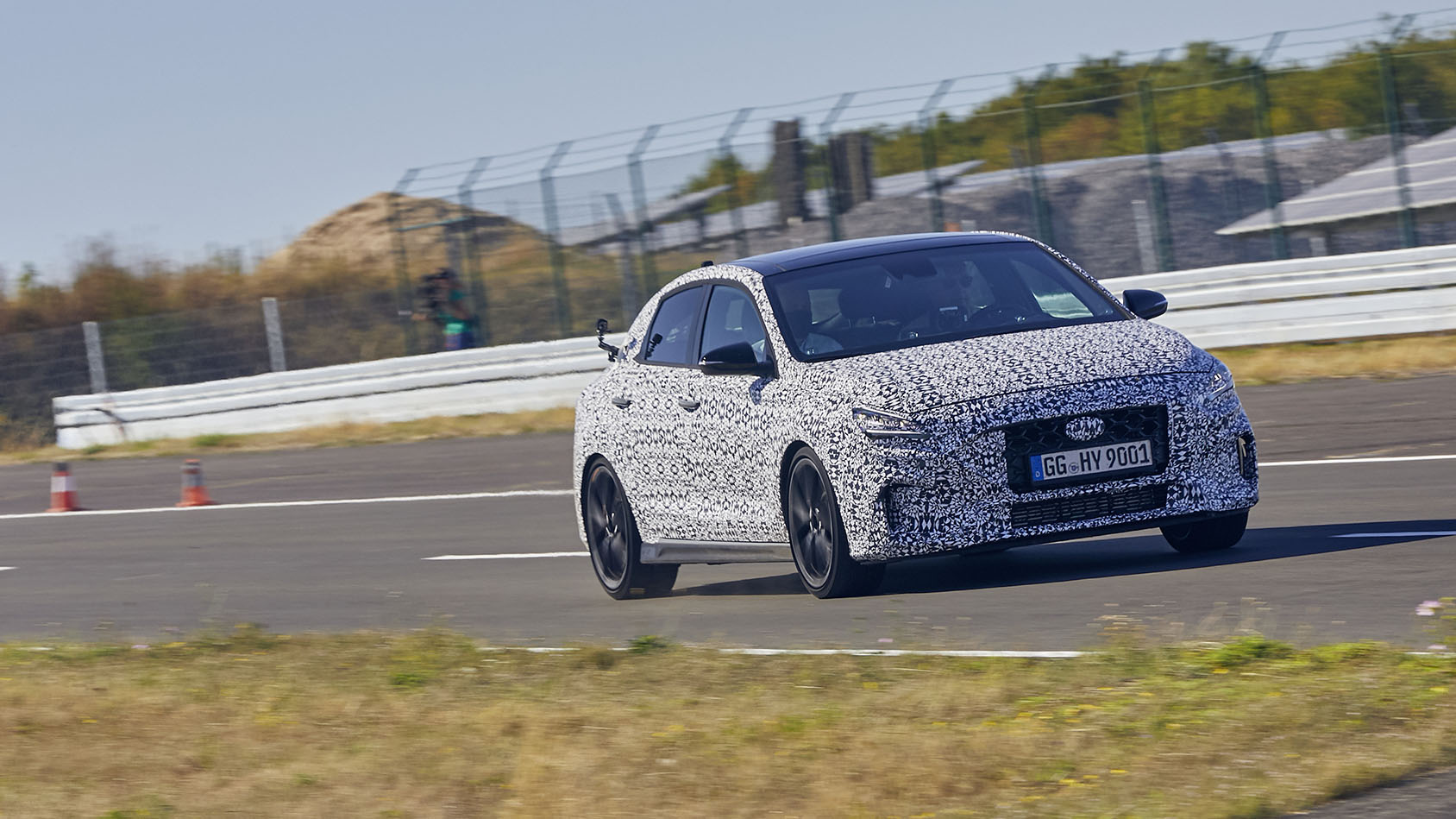 Not all-new – this is merely the mid-life facelift, designed to keep Korea’s first true hot hatchback in the mix as the new Golf GTI Mk8, BMW 128ti, Skoda Octavia vRS and Cupra Leon all arrive at once and squabble over your £30k.

Tell you what though – this is just about the most comprehensively massive mid-life tweak you’re ever likely to see a hot hatch receive.

Predictably, there’s new LED headlights, tail laps and some remoulded bumpers under that camouflaged wrap. Obviously there’s a bigger touchscreen inside, which all cars in 2020 must have by law, apparently.

But the lengths Hyundai’s Namyang-based, Nürburgring-honed N Division have gone to in order to ensure the i30N is nicer to drive make VW’s updates to the Mk8 GTI look, frankly, a bit limp.

Just a tickle: the 2.0-litre turbocharged four-cylinder engine has been boosted from 271bhp to a Focus ST-matched 276bhp, with torque also up from 260lb ft to 289lbft.

Hardly mega gains on paper, but from behind the wheel, the power delivery feels completely fresh. There’s still a 245bhp base model, but only the brawnier i30N Performance will be brought to the UK. It’s now 0.2sec quicker from 0-62mph, taking 5.9 seconds with the standard manual gearbox.

Hyundai calls it a ‘flat power’ engine, which is a lame title. They should have called it ‘Power Tower’ or ‘Thrust Monster 5000’, because the new i30N is less peaky, generating maximum punch lower down the rev range, and maintaining it for longer. The sense of turbo lag has been diminished, though not erased entirely.

Basically, it’s a bit quicker in every gear at any revs, which makes it feel a lot faster overall.

The big news is the eight-speed twin-clutch gearbox, but we’ll come back to that. Because Hyundai has been busy sweating the small stuff. See, it knew the new gearbox was going to add weight, so it set about offsetting it.

That’s why the new i30N rides on forged 19-inch rims – a set of four saves 14.4kg versus the wheels on the old i30N. They wear a new flavour of grippy Michelin tyre. Inside the handsome rims, Hyundai has ‘invested’ some of that weight saving in bigger brakes: the front discs swell from 345mm to 360mm. The electronically-controlled mechanical limited-slip differential and power steering have had an upgrade, to quell the car’s more unruly habits under power, but the engineers insist the focus is still all about raw fun, and never just making the car go faster for speed’s sake.

Inside, there are optional bucket seats. Hyundai calls them the ‘N light sport seats’. Because while they save 1.1kg each, they also feature a light-up ‘N’ badge in the backrest. Hah-ha, light seats, geddit?

Hmm. That feels like a marketing gimmick. They’d have been less heavy still without a refrigerator light plonked inside. One BMW M Division titbit too many, perhaps.

Oh, and you still get a choice of bodystyles: five door hatchback, or the sleeker Fastback. Track day addicts might like to know that although the N Division couldn’t give a monkeys about lap times, they say if they did, the Fastback is the one to go for. Its lower roofline and smaller frontal area ekes out a few extra kph down the Nürburgring’s lengthy Döttinger Höhe straight.

I don’t care about lap times either, but I LOVE modes. Got modes?

Yep, the i30N remains ultra-configurable, but the interface has been simplified. It’s now all handled on one screen, where you set each parameter (engine response, suspension, diff, noise, steering, rev-matching, ESP and on the auto, gear-shifting) to your liking.

Before, there were separate sub-menus for each, so this update makes life easier. Good.

So, this gearbox. Why didn’t the i30N offer this originally?

Back when the i30N first went on sale in late 2017, the only twin-clutch box in Hyundai’s cupboard was a seven-speed dry-clutch DCT, and quite simply, the engineers didn’t think it was good enough. The engine would’ve had to be detuned so it didn’t melt the transmission, and the shifts were judged too slow for a sporty car. As a result, the i30N has been manual-only for three years…. not that we’re complaining.

This new eight-speed DCT has tricks and gimmicks. There’s the ‘N Power Shift’, where kinetic energy is stored in the gearbox as you accelerate then deployed to give a little pulsing burst of acceleration mid-shift, so it feels like you actually accelerate through the change – just like a McLaren 720S. It’s a little reward for wringing out the engine to the redline before tugging the cool, tactile metal paddle mounted on the chunky wheel.

Then there’s the ‘N Grin Shift’. Yep, really. Grin Shift. This is activated by the new ‘NGS’ button on the steering wheel. No, I’m not joking.

If you’re familiar with the ‘Sport Response’ button in a Porsche 911 Turbo S, you’ll know what the game is here. Prod it, and no matter what mode you’re in, or what gear, everything defaults to its angriest, boostiest setting, and the whole powertrain primes itself to go flat out. It’s like treading on Bruce Banner’s toe in a stiletto. In a split second, everything goes from docile and unassuming to AAARGGHHH.

You get 20 seconds of ‘NGS’, then it shuts off for a while because emissions laws say so. But it’s plenty long enough to rattle off a few overtakes, and impress your mates. They should’ve called it ‘Watch This!’

In short, NGS is for lazy people who CBA to use paddles or set up a decent ‘Custom’ driving mode. It’s a bit of a toy, but it shows the sense of humour Hyundai has maintained setting up this gearbox.

Anything else new and fun?

Last but not least, the N Track Sense Shift is always watching and waiting in the background, ready to sense if you’re lapping a circuit. It’ll monitor your driving style, learn from it, then prime the shifting strategy to match your laps.

Lots of sports car gearboxes claim they can do this, but most of them just panic and kickdown into first when you nail the loud pedal. The i30N, however, is proper. This side of a Porsche 911 GT3 RS, this is the best twin-clutch gearbox I’ve ever experienced when left to make up its own mind. It doesn’t get caught out. The shifts are crisp, fast, and the downchanges always slot in just as you’d expect them to.

Why wouldn’t I just use the paddles?

Let’s say you’re learning a new circuit. You’re focused on threading a line between some cones, hitting every apex. No-one heads out onto a track they’ve never driven before and nails a Hamilton-neat lap first time out.

Being able to concentrate on stringing together a sequence of bends without having to intervene with squabbling clutches and unhelpful gearshifts is a clever party trick. I drove the car around the Nürburgring Grand Prix Circuit, and was glad of the extra brain capacity it afforded, so I could concentrate on being brave enough not to lift through the fearsome Turn 12 kink…

You survived, then, Well done.

I walked away not just pleased to have avoided depositing Hyundai’s rather valuable prototype roof-first into the gravel bin, but seriously impressed with the N Division’s attention to detail. For a facelift, a lot’s gone on here. The gearbox has been properly developed specifically for this car’s buoyant character, not just phoned in at 5 o’clock on a Friday.

The i30N still feels alert and alive beneath you, but perhaps a touch less hard work, thanks to its improved tyres, brakes and more linear steering. British roads will present a sterner test than Germany’s glassy back lanes and a grand prix circuit, but if anything, it seems the i30N will have stretched its lead over the chasing pack. You might – whisper this –  even be tempted away from a having a manual gearbox. Fancy that.