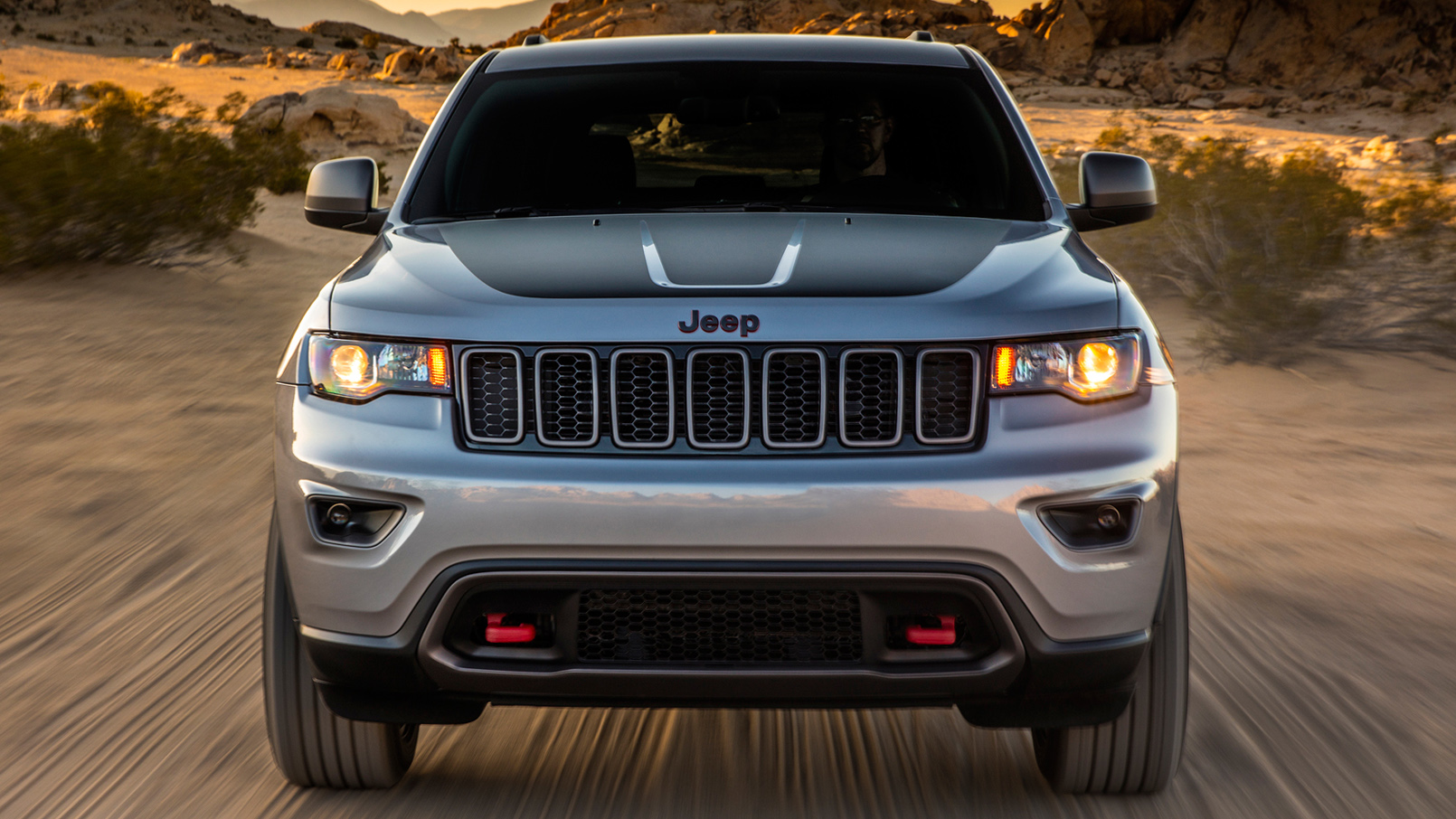 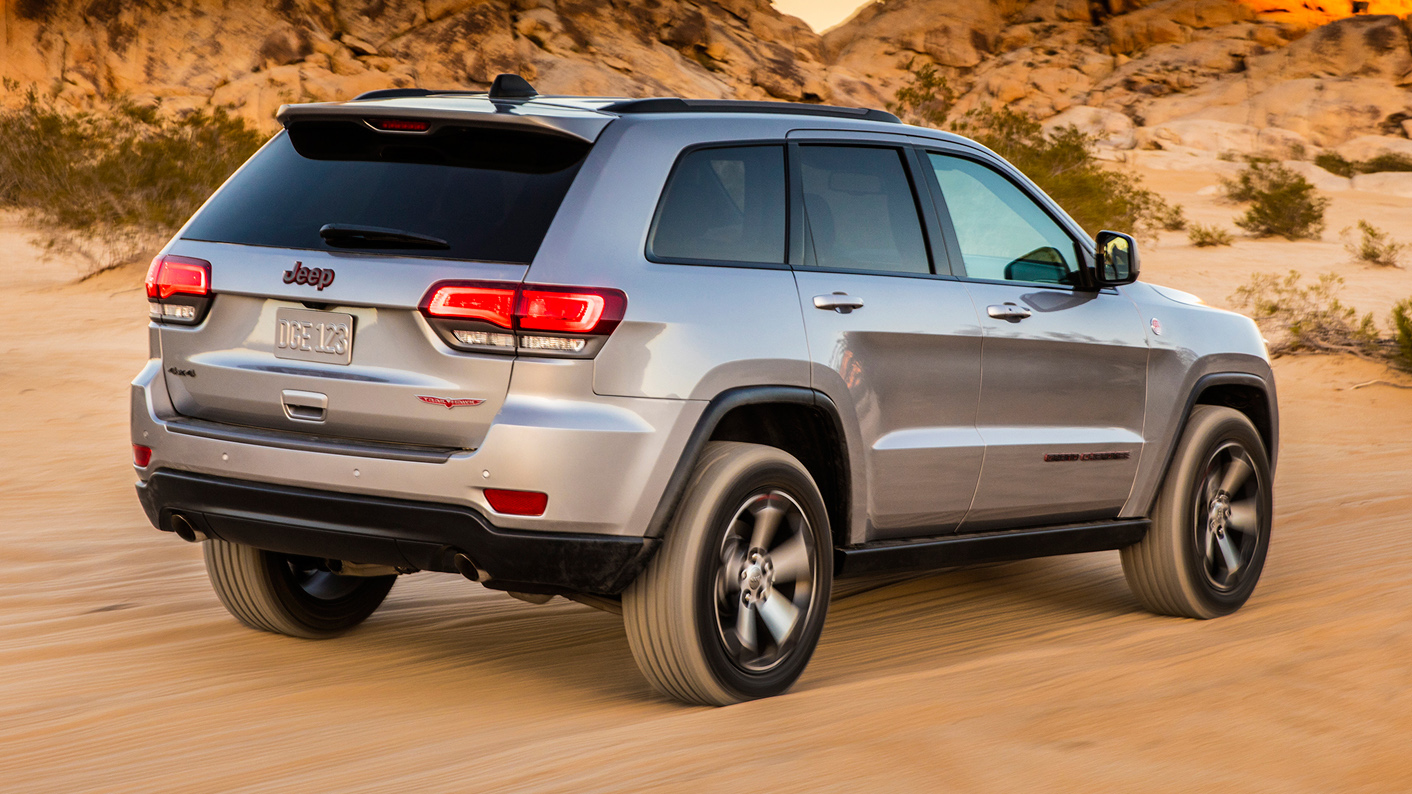 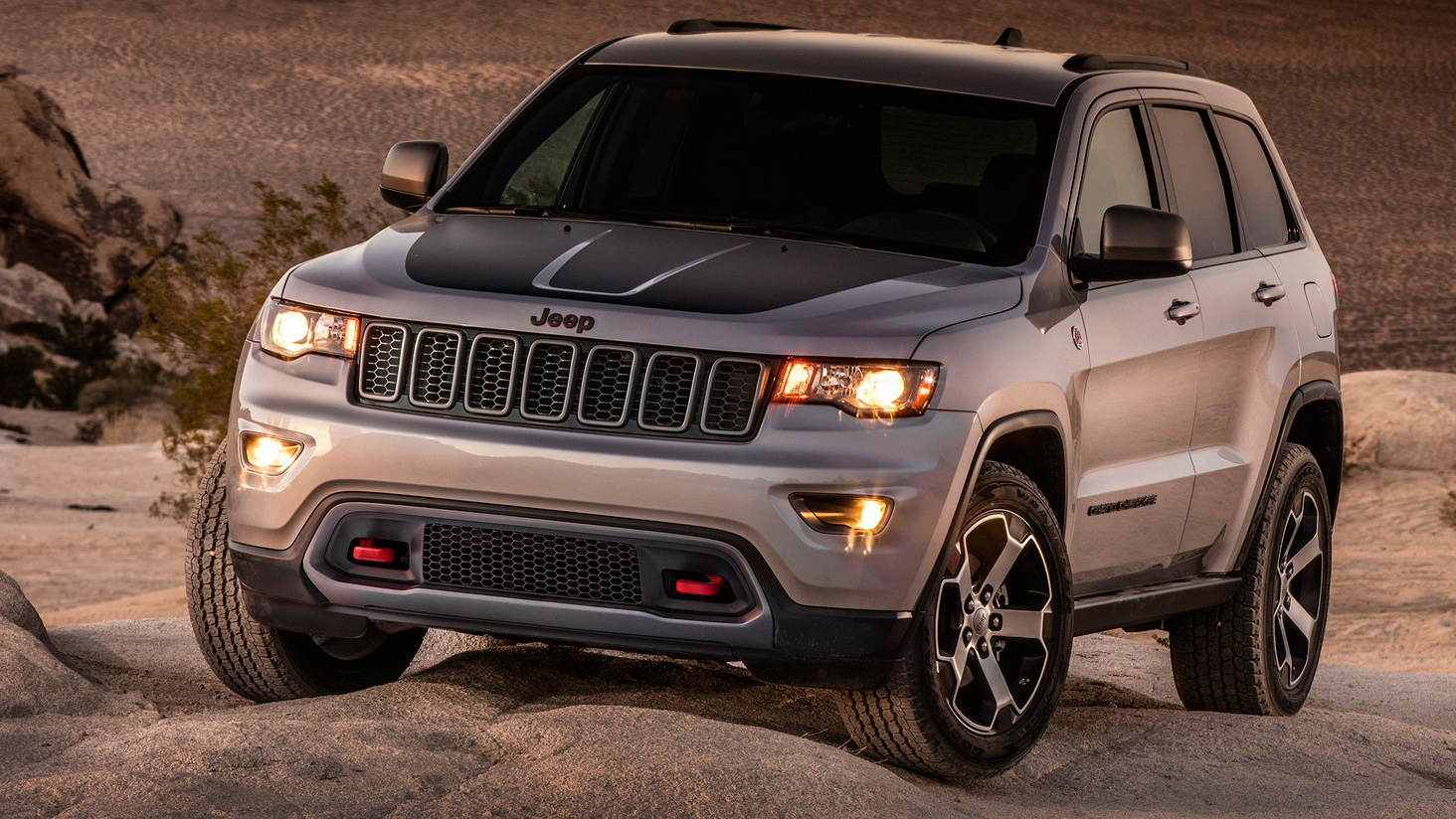 The Jeep Grand Cherokee ‘Trailhawk’ – the butchest, brashest and most off-roady Grand Cherokee ever. It joins the diddy Renegade and middling Cherokee in the Trailhawk lineup to help connect the American brand back to its roots of being imperious off-road.

How does it differ from any other Grand Cherokee?

Well, it’s the sixth spec in the model line-up – one bookended by the plush Summit at one end and sporty SRT at the other – and is designed for welly-wearing off-road enthusiasts.

Using the newly-facelifted Cherokee (redesigned lower front fascia, new fog lights and more purposeful seven-slot grille) as a base, Jeep’s engineers have then built on it with a host of all-terrain enhancements to help headbutt planet Earth out of its way.

Crucially, there are new 18-inch Kevlar-reinforced Goodyear Adventure off-road tyres to help get a grip on the wilderness, girder-like solid steel rock rails down the side sills, quarter-inch sump and skid plates and updated air suspension. It now gets 10.8-inches of ground clearance and offers more articulation (half an inch extra) to hobble over logs and rocks.

Then there’s the upgraded Selec-Speed Control (Jeep’s version of Terrain Response) that has hill ascent and descent built in. It’s basically off-road cruise control, allowing drivers to control the speed of the Trailhawk – both up and downhill – using the steering wheel paddle shifters and your fingers, rather than dancing around on the brake and accelerator like Michael Flatley.

Oooh! It’s got funky stripes on the bonnet.

It does. Contrary to popular belief, they don’t make this Grand Cherokee any faster (estimated 0-62 of 7.2secs and a 118mph top speed). Instead, they’re there to stop the sun reflecting off the bonnet and into your eyes. So you don’t, y’know, toddle off the side of a cliff.

They’re just part of the new aesthetics to highlight that you’re in a Trailhawk. Other subtle hints include new mirror caps, a roof rack with neutral grey accents and two red tow hooks protruding out of the front bumper. Oh, and sporty SRT seats inside.

Gotcha. What engines do I have to play with?

Depends what part of the world you’re in. There are three engine choices available: a 295bhp, 260 lb ft 3.6-litre V6, a 360bhp, 390 lb ft 5.7-litre Hemi V8 and a 3.0-litre EcoDiesel V6 churning out 240bhp and 420 lb ft. They’re all connected to an eight-speed auto. In the UK, we’ll only get the diesel, though don’t let that put you off: given its advantageous torque and fuel economy figures, it’s actually a good fit.

We drove it off-road in the gnarly, bouldery landscape of Red Rock Canyon, Nevada. It’s terrain we could only dream of in the UK and offered the perfect rugged test. If it’d get through this, wild Wiltshire should be a doddle.

And, impressively, it did. With relative ease and aplomb. Thanks to the rear electronic limited-slip diff, whenever a wheel would start to slip, the system would throw some torque at another tyre to get traction and plod on. In some cases, it’ll even anticipate low traction and adjust in order to proactively limit or eliminate slip. The Selec-Terrain can be adjusted to set the Trailhawk up for whatever you need to conquer. The options are thus: Auto, Sand, Mud, Snow and Rock. Given we had large, slippery and jagged rocks to scramble over, we went for ‘Snow’. Only joking, we went for ‘Rock’. That way the air suspension would jack itself up to its maximum height of 28cm, while the transfer case, diff and throttle would adjust for maximum low-speed control.

With an approach angle of 29.8 degrees, break-over angle of 27.1 degrees and the departure angle of 22.8 degrees, the Grand Cherokee Trailhawk and its 10.8in of ground clearance threw itself up, over, and down rocks that would cripple most other premium SUVs. Plus, with the hill ascent and descent, you just select your speed, chill out and let it do its thing.

We also tried it on some dunes. With a twist to ‘Sand’ its brain was rejigged to hold gears and maintain momentum, keeping it pinned on the redline. This is where the strength of the V8 shone through compared to the torque-deficient V6 that had more of a tendency to bog down in nature's sand pit. Luckily, this isn’t something we’d have to worry about tin the UK. Primarily because we’re not graced with many sand dunes. But also because we’re not stumped with the choice of these two engines.

Better than expected but not exemplary. We’d thought those chunky tyres would try their best to be heard inside the cabin while at speed, but their roar is kept well at bay and the more premium and well-equipped cabin is pleasant and comfortable, yet lacks the refinement and quality of its rivals. However, the eight-speed ‘box transforms how the Jeep drives on the road, bringing Germanic sophistication. Unfortunately, the steering remains overly light – a benefit off-road – meaning the Trailhawk is not as predictive while cornering on road. Something compounded by the fact the body control could do with being tightened up slightly.

The American market devours off-roaders like this but we fear the Trailhawk is incredibly specialist for our tamer British terrain. Prices are yet to be confirmed for its introduction into the European market next spring, but expect them to be around £48,000. Which is steep.

But if you fill your weekends bumbling down green lanes and across farmland, it’s an alternative and perfectly valid option. It’s more refined than a lot of agricultural off-roaders but also incredibly capable. However, the lack of hardcore diff locks increases your chance of getting stuck, but then you could always bolt a winch on if that’s a worry. For our largely petty UK terrain, it’s more than adequate.