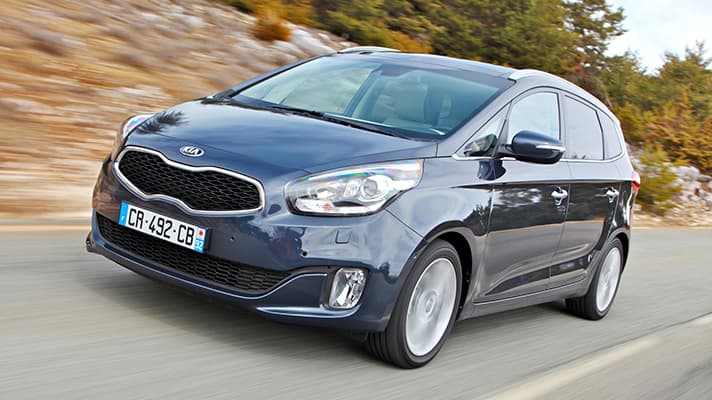 This is a seven-seat MPV with a diesel engine. But, before you lapse into a cataclysm of boredom, take a look at the picture above. Handsome, isn't it? It's the new Kia Carens, and it's an important car.

Important for Kia, anyway. It's the last model to be updated with design director - and Kia CEO - Peter Schreyer's Tiger Nose styling and, as such, makes this family runabout more likely to be taken seriously, and less likely to be used as a future TopGear car dart. The proportions are more agreeable now, too: it's lower, longer and narrower.

There are more pleasing things inside. The dashboard is nicely laid out, there's a funky touchscreen display, it feels rigid enough to deal with a horde of hungry, irritable children and is spacious enough to accommodate said kids and their many necessary extras. UK models get a seven-seat only set-up, and it works well, the rearmost seats folding easily away under the bootfloor. Handy.

They - and you, the driver, of course - will also be pleasingly cosseted by the ride. The whole car feels settled, quiet and calm. Like a big, friendly hug. Even the electric steering is light and worry-free. Sadly, owners of fireproof underwear might need to look elsewhere, because while the Carens is perfectly acceptable, it's not up there with the class best. The steering is a little too vague, and there's not the same chassis communication you get from, say, a Ford S-Max (a bit of a TG fave). There's not much body roll considering the dimensions, but you won't be setting fastest laps at Spa.

The higher-powered 1.7-litre diesel makes sure of that. OK, so it's quick enough when scooting around, just 0.2sec slower to 62mph than a 2.0-litre diesel S-Max, and it's a better bet than the lower-powered version of this engine (113bhp) or the two petrols (1.6 and 2.0). So the 133bhp diesel is the one we'd have. It's good enough and, to be fair, isn't too intrusive. Plus, this whole discussion about dynamics is a tad pointless in a car designed to ferry people, right?

To that end, we come to cost. Kia tells us indicative pricing will start from around £18,000 - which is just under £5k cheaper than an entry-level S-Max. Five grand. Think about that.