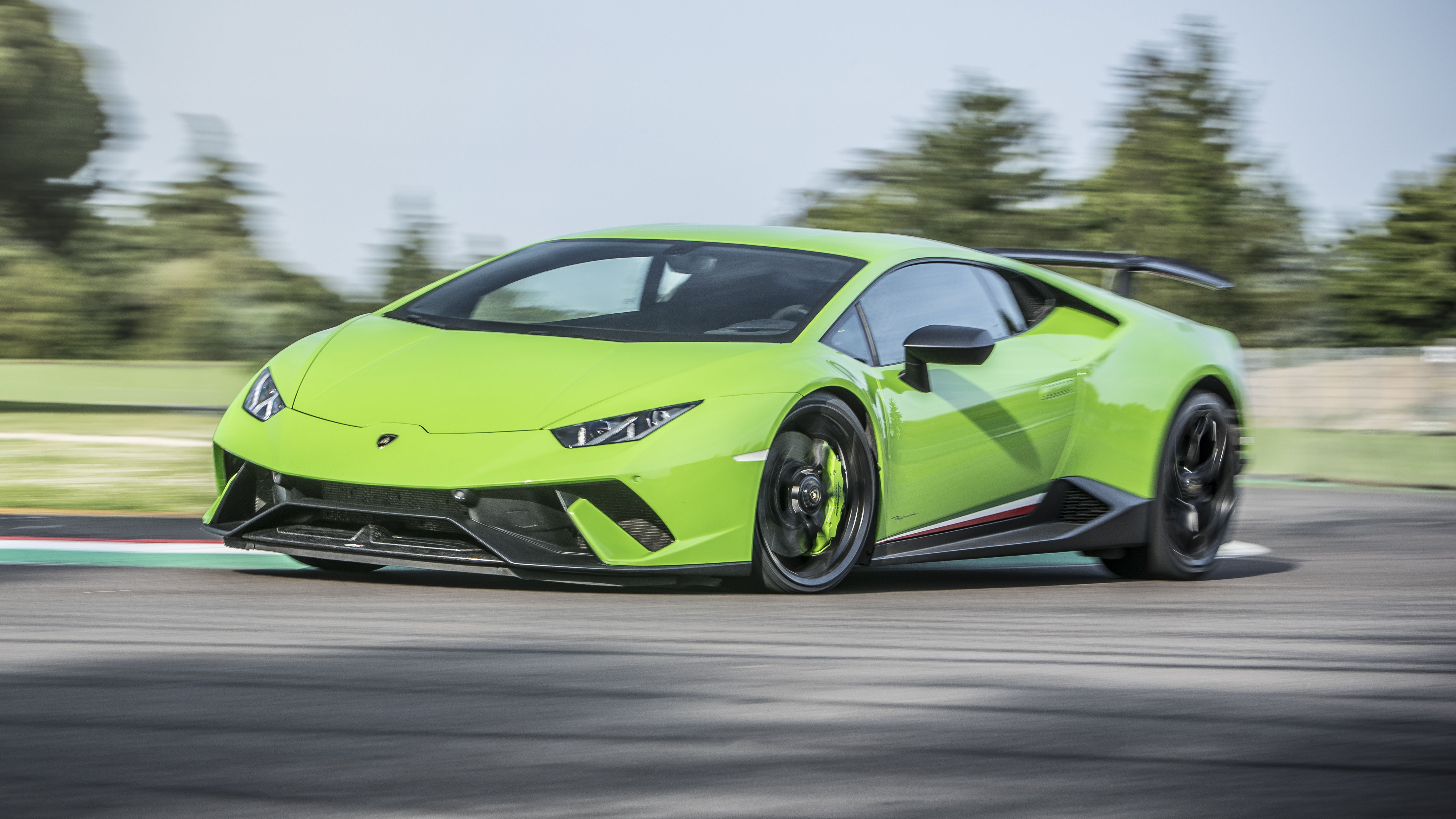 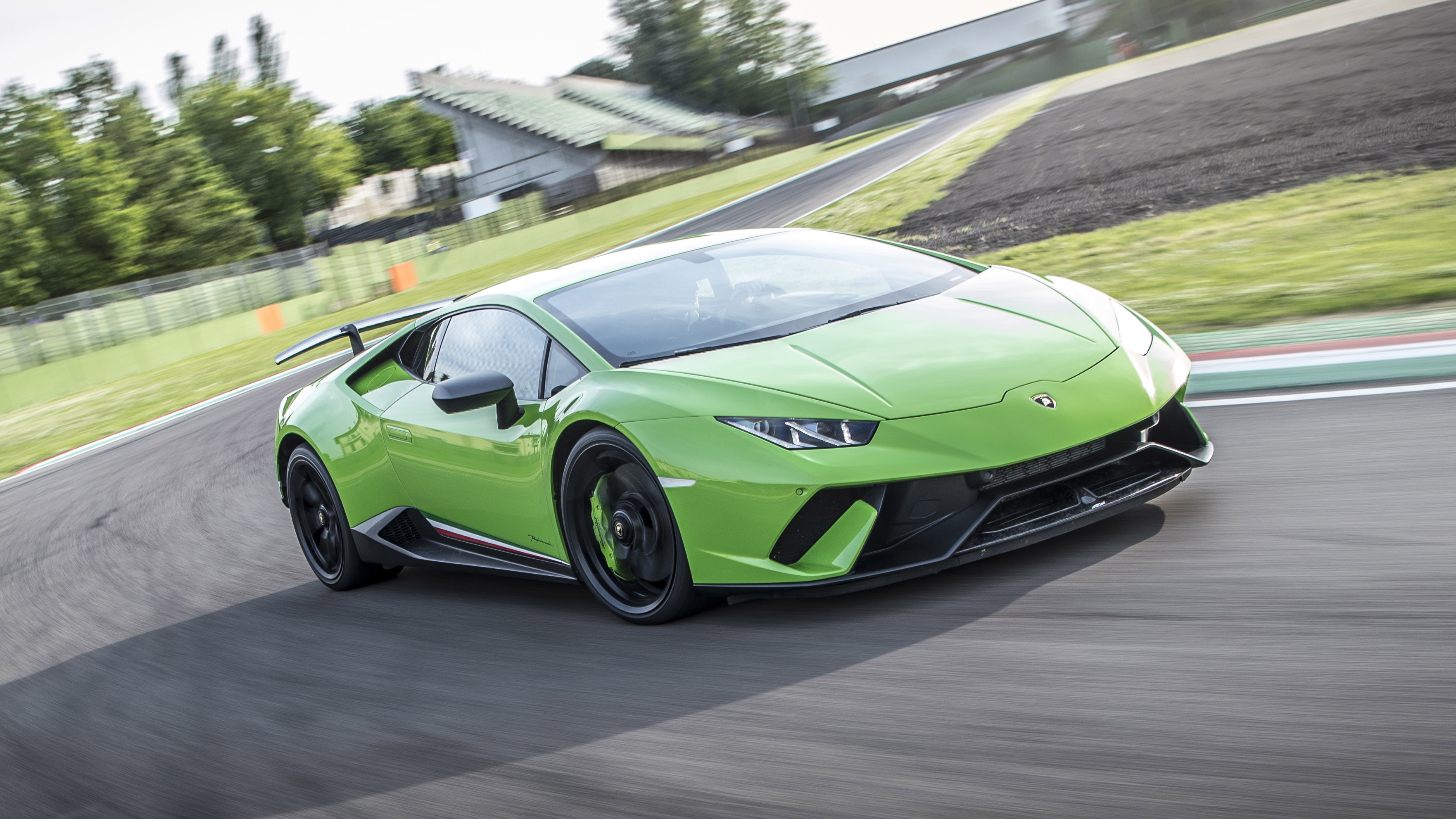 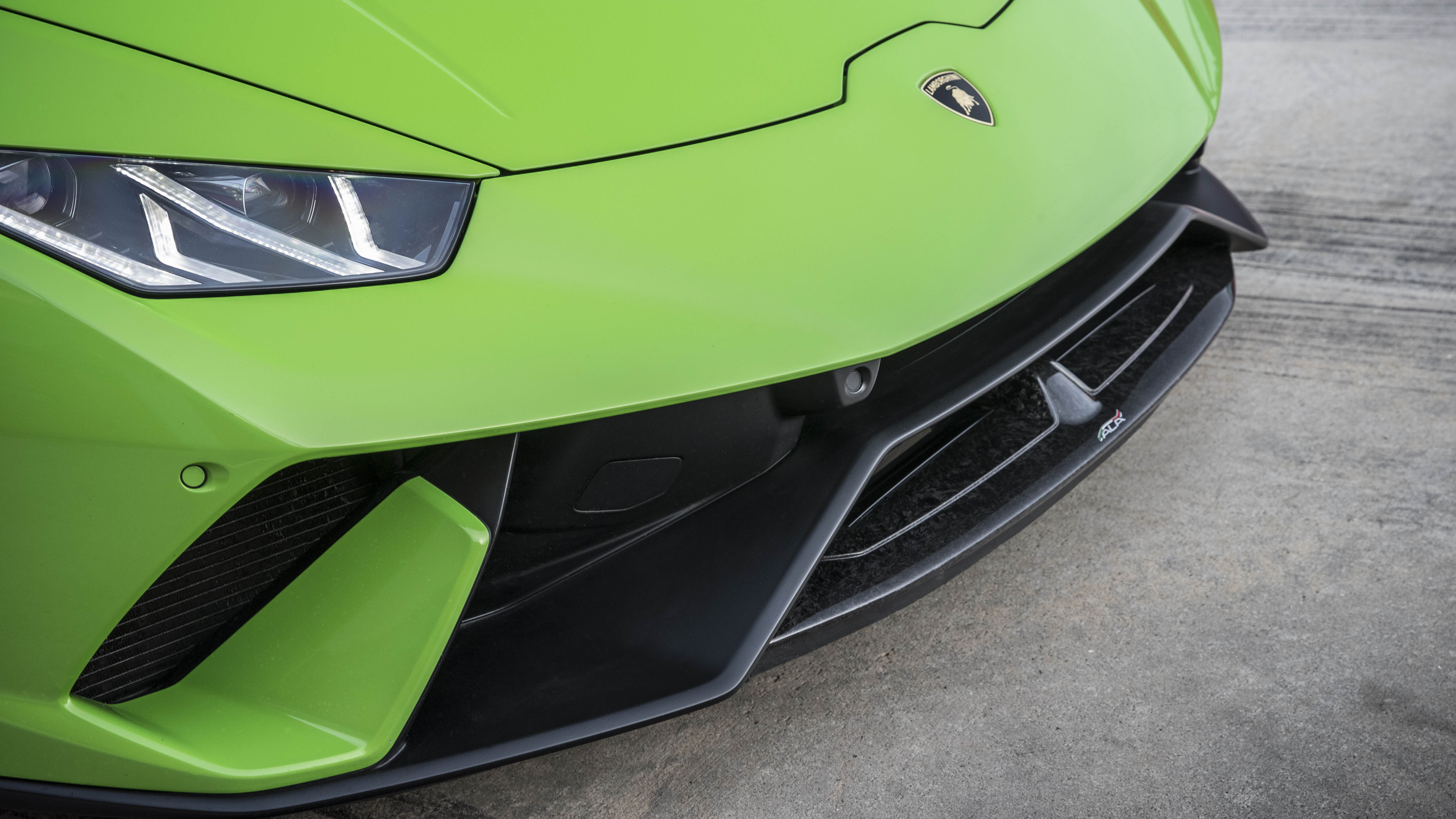 The new Lamborghini Huracán Performante. Or, what happens when you lock a Huracán in a cage, feed it raw meat and poke it with a pointy stick. You know the drill: like the Gallardo Superleggera before it, this is the harder, faster, stickier and more track-focused version of Lambo’s baby supercar designed to monster race tracks, but retain a whiff of usability on public roads. If Lambo had a GT3 badge, this would be wearing it.

Yes, we have driven it already, but that was an early prototype wrapped in black and white sticky tape and we were limited to a few laps of the track. This is the finished article, and while we have the Autodromo Internazionale Enzo e Dino Ferrari (Lamborghini prefer to call it Imola for some reason?) at our disposal once again, we’ll also be braving the Italian highways.

Good call. The engine is still a naturally-aspirated 5.2-litre V10 screamer, but with power and torque topped up by 30bhp and 30lb ft for 631bhp and 443lb ft – making this Lambo’s most powerful V10 to date. Changes include a bronze manifold (channeling other special editions, like the Diablo 30th anniversary), new titanium valves and a freer-flowing exhaust with higher-mounted pipes. Let the V10 and quicker shifting seven-speed dual-clutch ‘box do their party piece and 0-62mph takes 2.9 seconds, 0-124mph takes 8.9 seconds and despite the extra downforce, top speed is still north of 200mph.

Needless to say the powertrain is pretty much perfect – high-revving, instant in its responses (gearbox included in that), an even angrier, serrated edge to the exhaust and enough torque low down (70 per cent at just 1,000rpm) so that you don’t have to go chasing the 8,500rpm red line. Although you should, because it’s magical. Say what you want about modern turbo V8s, but this is what you really want – everything else is just a compromise.

Yes, but only when and where you need it. The Performante debuts the Aerodinamica Lamborghini Attiva (ALA) system – active aero to you or I, but this is far cleverer than anything we’ve seen before. Jutting front spoiler and peacocking rear wing are present and correct, but both feature high and low downforce modes and, at the rear, the ability to vector downforce from one side to the other, according to your cornering requirements.

A motor implanted in the front spoiler actuates two flaps. With ALA off they remain closed, delivering maximum downforce at the front axle. With ALA active they can open reducing drag and underbody pressure. Meanwhile, the forged carbon fibre wing and two upright supports are actually hollow. Airboxes at the base of these uprights, also with motorised flaps, are fed by air rushing over the engine cover.

Flaps closed and the rear wing acts as you’d expect, producing maximum downforce (750 per cent more than a normal Huracan at the rear axle). Flaps open and air rushes into the spoiler and out through a narrow channel on its lower surface, stalling the airflow and dramatically reducing drag and therefore downforce. The really smart bit though is that one side can be open while the other is shut, increasing downforce only on the inside rear wheel during cornering and helping to rotate the car in. Under hard braking you can have maximum downforce, on the straights the wing effectively disappears. Genius.

Any other speed mods?

Many. The lightweight 20-inch forged wheels are wrapped in bespoke Pirelli P Zero Corsas, although even stickier Pirelli Trofeo Rs – as worn by the 6min 52sec ‘Ring lap record car - are available. By tuning the spring rates and anti-roll bars, vertical stiffness is up ten per cent, while roll stiffness is improved by 15 per cent. The variable ratio steering (LDS in Lambo speak) is standard, and has been recalibrated for “maximum driver feedback”, and the ratio significantly reduced in full-bore Corsa mode.

Incidentally, Lambo says the middle of the three driving modes – Sport – offers a more rear-wheel drive configuration with “oversteer behaviour and easier drifting.” Given the standard Huracan tends to understeer more than we’d like, this is excellent news.

Of course, but not any old carbon, this is Lambo’s forged composite, made from mixing chopped-up carbon fibres with resin to allow complex shapes while retaining rigidity. It’s used for the front spoiler, entire rear wing assembly, engine cover, rear bumper, diffuser and much of the interior, too. All in there’s a 40kg saving over standard, so the Performante weighs in at 1,382kg dry, 50kg less than the new 911 GT3 PDK. 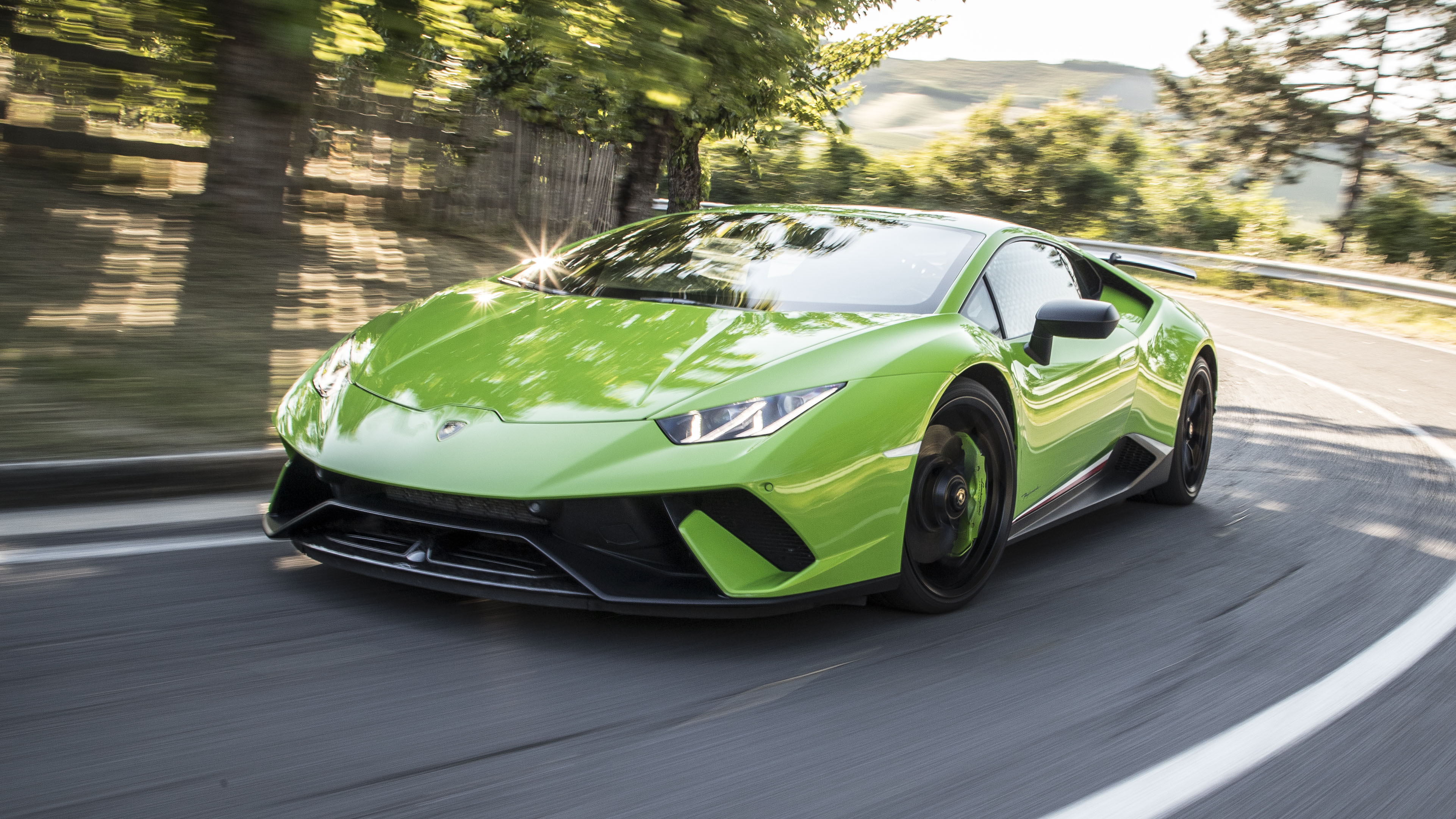 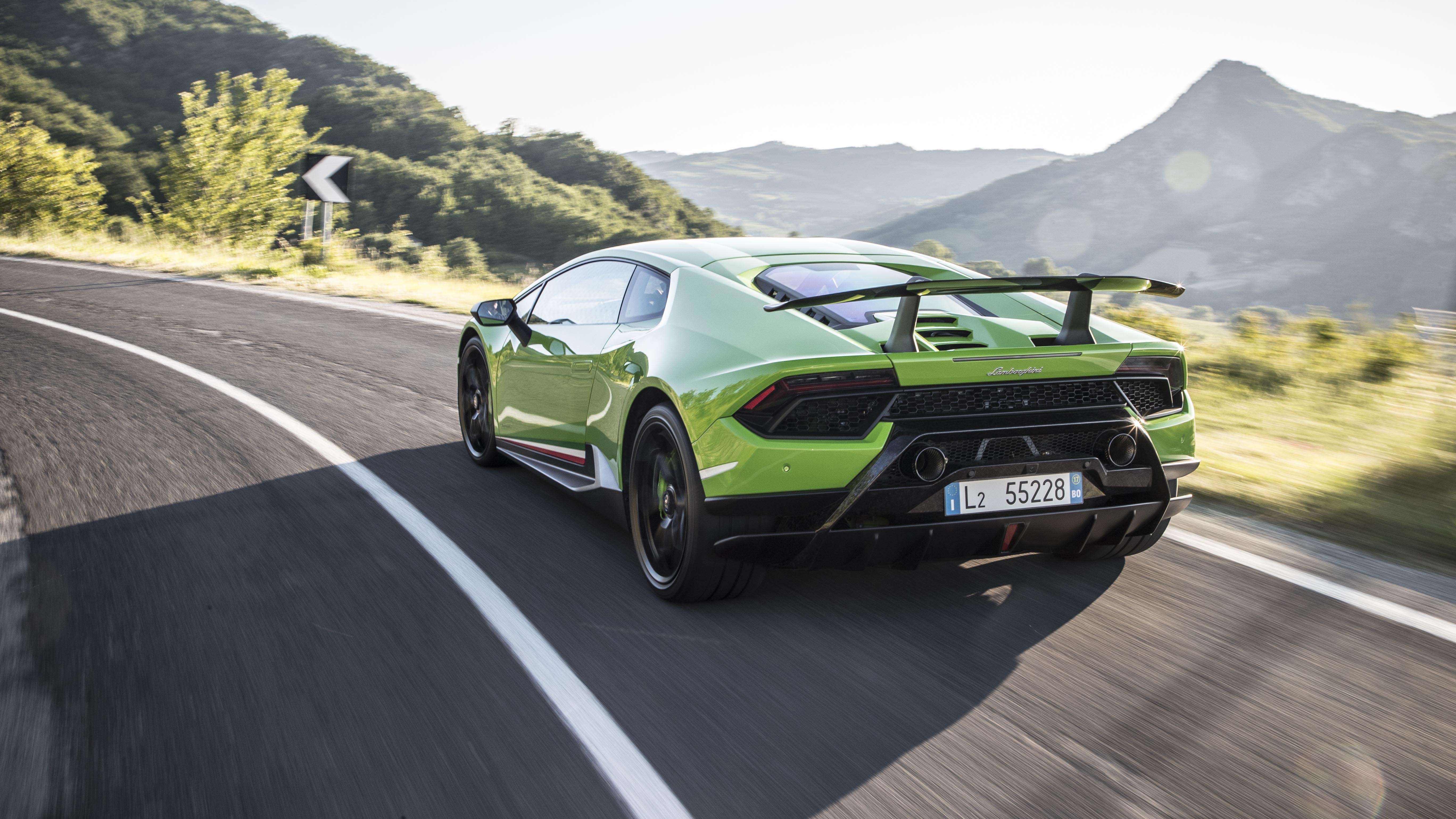 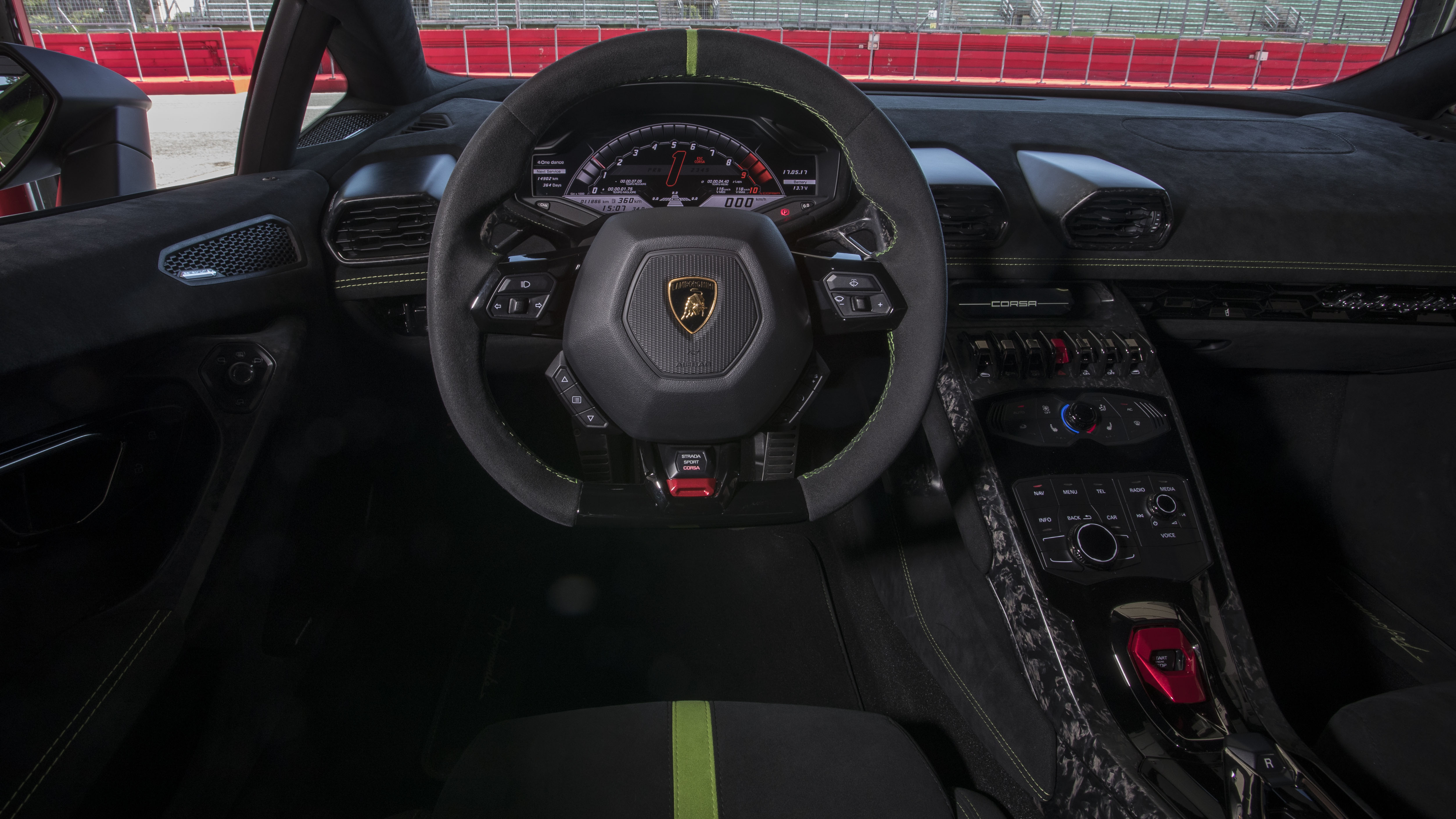 So we’re talking a stripped-out special on the inside?

Not at all. If you’ve got a thing for your chiropractor you can order the fixed-back bucket seats, but we wouldn’t go there, the electrically-adjustable standard seats are just the job. There is carbon-fibre everywhere – on the door handles, the centre console, the air vents, the paddle shifters - all contributing to that 40kg saving, but you still have air-con, endless alcantara and carpets under your feet. Race tracks are this car’s domain, but not at the expense of being a road car you can actually use. More on that in a minute...

Utterly brilliant. It’s the speed with which you gain confidence that’s just staggering. One lap I’m pottering about behind an instructor learning my lines, two laps later I’m throwing it about like I’ve known its limits and the subtleties of the track layout for years. For the record I haven’t, it’s my first time at Imola. It’s all about trust, because instantly you have faith that the Performante will go where you point it, and stay glued to the track.

Predictability and stability – these are not sexy words, but because the Performante has both in spades, you can carry extraordinary speeds without ending up in a £207,925 pile of forged composite. Where the standard Huracan would be fishtailing under hard braking, or understeering in the tighter corners, the Performante feels locked in to the road, strong and stable, so you can really stand on the carbon ceramic brakes without fear and place the front end with breathtaking accuracy. In Corsa mode the steering is now whipcrack fast, Ferrari fast, but it works because now the front end can keep up.

Can you actually feel the trick aero working?

In isolation, no. Other than a sense that you can take liberties with your entry speeds and throttle inputs and the P Zero Corsas will keep their fingernails doggedly imbedded into the track surface. However, an exploratory lap in Sport mode (which allows the front and rear wings to switch between high and low downforce modes, but not the side-to-side aero vectoring at the rear) reveals that there’s witchcraft afoot. A little wag under braking here, a perfectly controllable oversteer moment there – it’s all a lot looser, great fun if you want to get the car out of shape, but you know you’re ultimately travelling slower and closer to kissing the barriers at all times. Back to Corsa then.

Tighter corners go like this: mash the brakes in a straight line, turn in late with just a little trail braking to get the nose tucked in, clip the cone Lamborghini has helpfully placed at the apex and then get back on the throttle. Plenty of revs and early on the gas and you’ll come out the side with just a few degrees of corrective lock, a gear higher or a softer right foot and there’s no fuss whatsoever, just slingshot acceleration down the next straight.

Faster turns, like the entry to Tamburello, reveal more. A flick of the wrists gets you moving towards the apex and the faster you go, the truer your line. I’d like to meet the driver who finds a way to spin the Huracán Performante and shake their ham fists, because it seems near impossible to me.

Too punishing to enjoy on the road?

Don’t let its Nürburgring obsession fool you, the Performante is perfectly happy away from 1G corners, too. Surprisingly so. And we’re not talking freshly tarmacked sweepers here, these were the narrow, knarly routes that surround the historic Imola circuit.

Yes, it’s ten per cent stiffer than the standard car, but when that starting point is one of the most pliable and everyday-usable supercars you can buy, ten per cent isn’t all that much. What you’re left with then is a car that gets its jiggle on when the surface really disintegrates, but never crashes or pinballs off bumps to the detriment of traction. Translation: even on dodgy roads, it's flipping quick.

Could you use it every day? Sure, why not, if you’re happy to be the guy or girl with the lime green Lamborghini daily driver, but the point is for all the heroic gains you get on track, the sacrifice to road manners is far less than you’d imagine. Certainly far less than the Gallardo’s transformation from standard to Superleggera.

Nah, not impressed, flabbergasted. I remember driving the standard Huracán when it was first launched back in 2014 and for all its flamboyance, I walked away feeling like it had a layer of bubble wrap still to be removed. That it was being smothered by a duvet of understeer to keep its less-talented clientele out of the barriers. On paper the Performante might be the hardcore, high-performance, track-hungry special edition, but like the Mercedes AMG GT R it’s actually just the better sorted car, full stop, and puts Lamborghini right there alongside the Ferrari 488 and McLaren 720S. Louder and lairier, in the great Lamborghini tradition, but also better able to exploit the explosive power from that sensational powertrain and turn average joes into driving gods. That’s my kind of car.