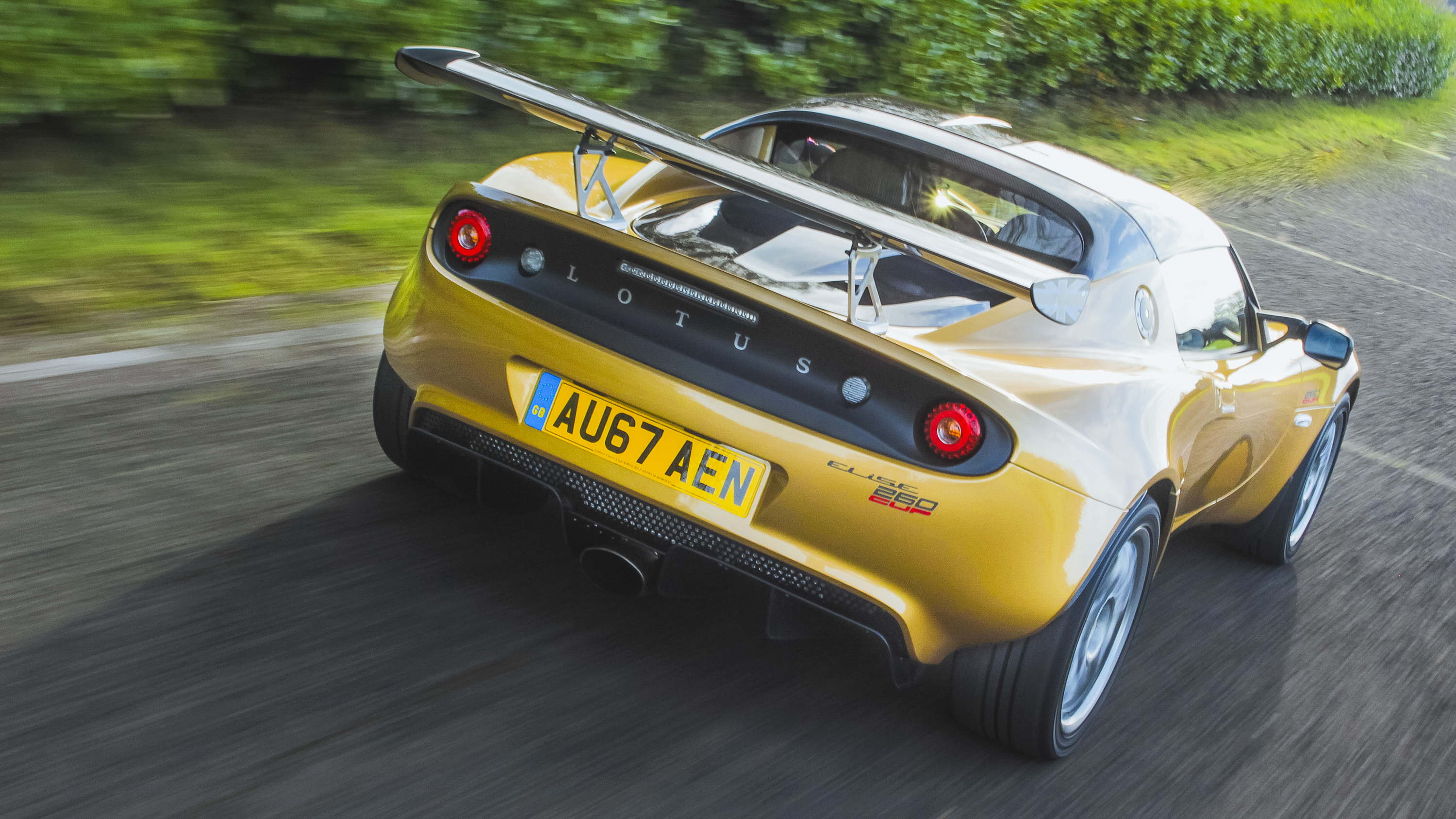 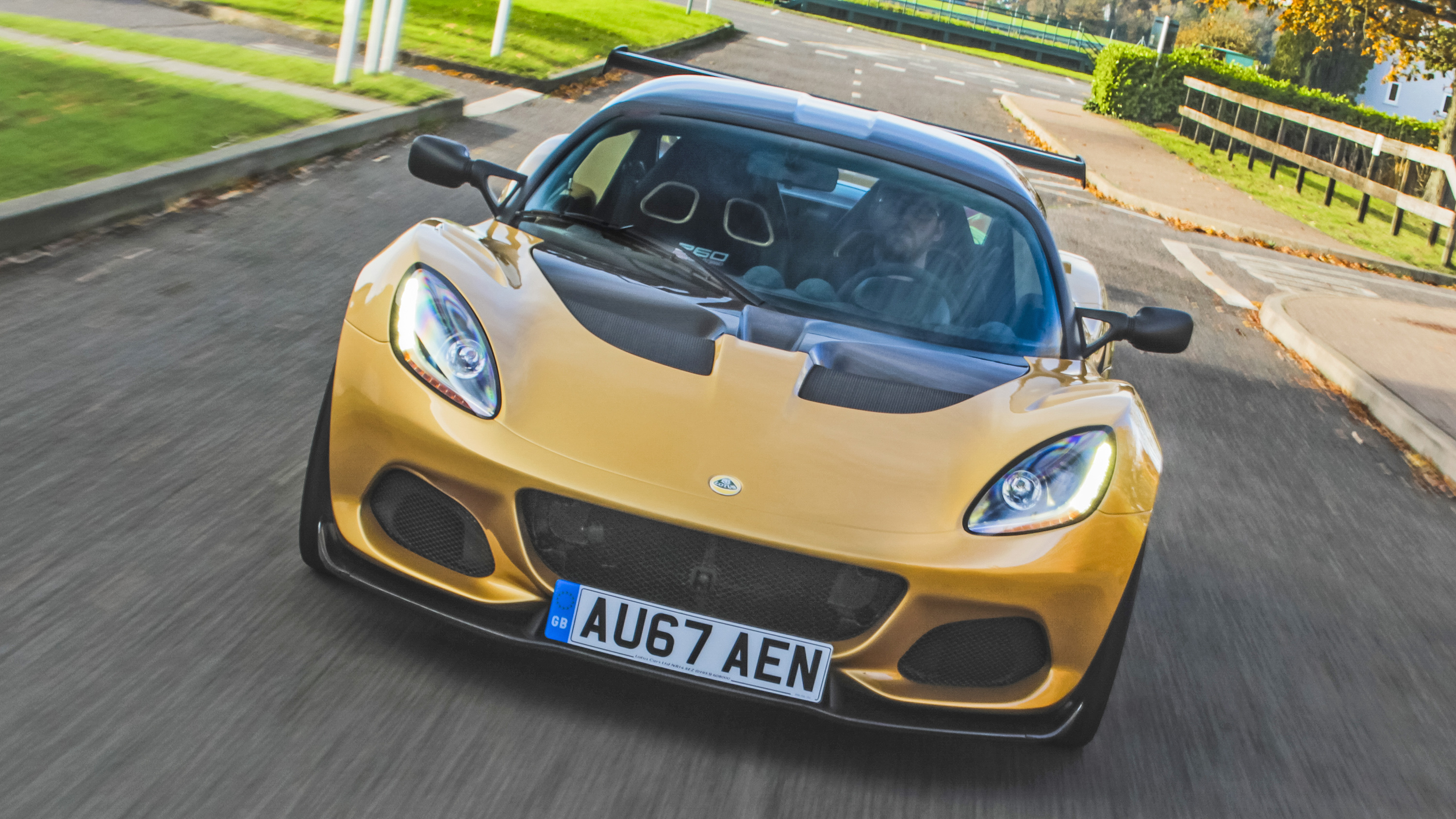 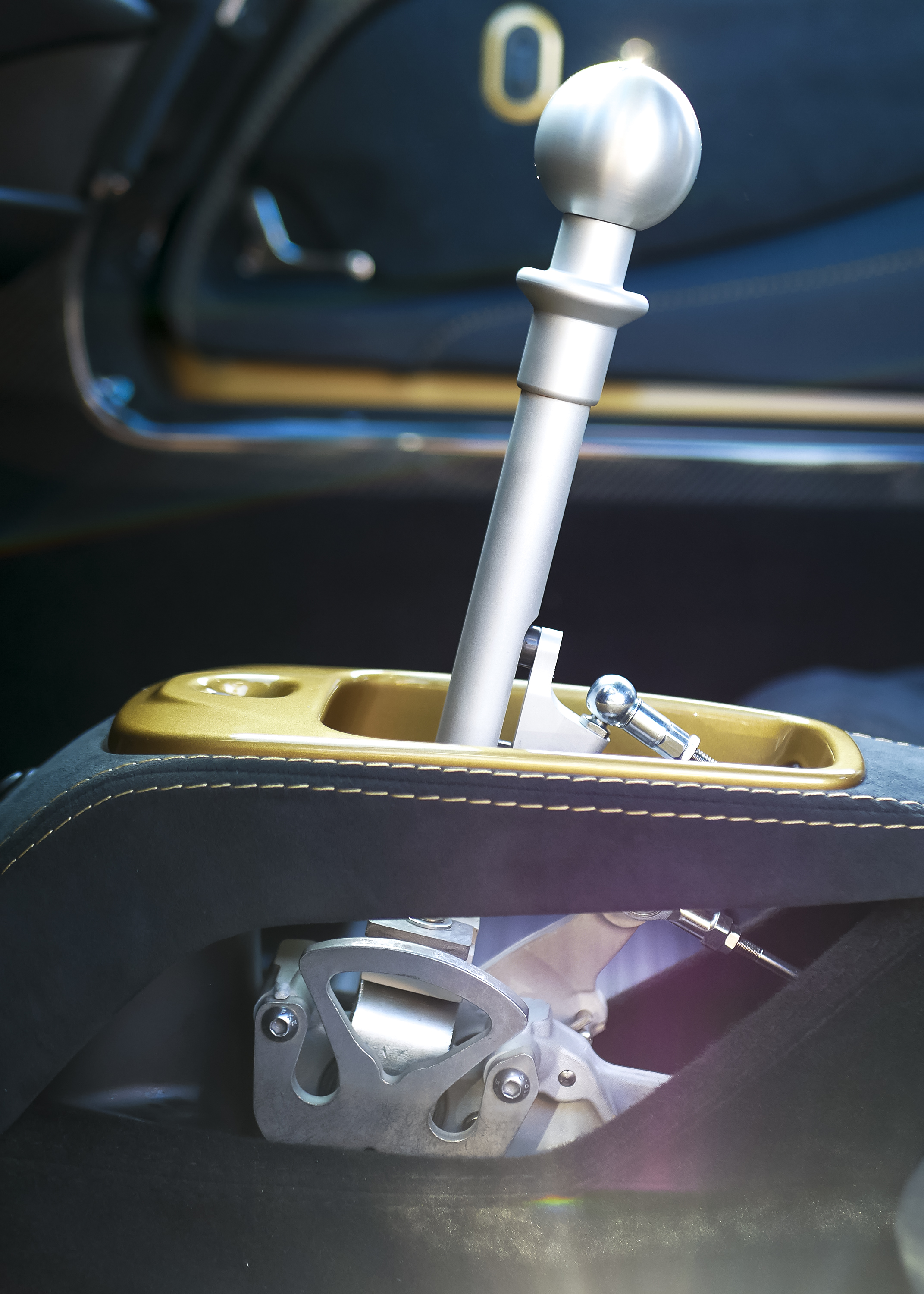 This particular shade of paint is called Championship Gold. It’s a tribute to a photograph of Colin Chapman sitting on the front of a similarly hued S2 Esprit with a JPS-liveried Cessna 414 in the background. Never has a light aircraft looked cooler. I was dubious about the idea of a gold Elise, but it’s not an overly bling colour, so it actually works rather well.

As you can see, the gold is also contrasted rather nicely with the carbonfibre elements. The carbon roof is an option (as is the titanium exhaust on this car) but the splitter, front access panel, engine cover, roll hoop cover, seats and wing are all carbon as standard.

And my what a big wing it is…

The Elise Cup 260's wing essentially a slightly truncated version of the item found on the 3-Eleven track car. Bolted on to beautiful billet aluminium supports, it is part of a package that increases downforce by 44 per cent over the Elise Cup 250.

All that wing on the back would just create a horrible, understeering mess if the car didn’t have some extra elements at the front. Thankfully there is a larger splitter protruding from the 260’s chin, but perhaps more importantly, there are also some vents on the front arches.

These help alleviate the pressure that builds up in the wheel arches and thus reduces lift. They look rather like gills and you can see them very clearly from the driver’s seat, reminding you constantly that you are in a very special Elise. All these aerodynamic changes add up to a maximum of 180kg of downforce at 150mph.

Is it just aero changes?

No, the Cup 260 also has more power. But not a lot. The supercharged 1.8-litre engine is up to 250bhp and 188lb ft or torque, which equates to hikes of just 4bhp and 4lb ft. However, more importantly, this car also has adjustable Nitron suspension.

Nitron’s wares have previously been used on the race versions of Elises, but never on the road-going Cup variants. Complementing the suspension is new rubber, with Yokohama’s latest AD08R tyres surrounding the ‘ultra lightweight’ wheels.

How fast does all this kit make it?

The important number is 2.5 seconds. No, that’s not its 0-60mph time (which is 3.8 seconds), but how much faster the Cup 260 is around the Lotus test track than the Cup 250. Given that the whole lap took just 1min 32sec, that’s an impressive chunk to have hewn off. Flat out, this Elise will do 151mph, but that’s not really the point.

Given all this extra grip, is it actually any fun?

Yes. Surprisingly, this is the most playful and progressive Elise I think I have ever driven. It can be grabbed by the scruff and thrown around a track in a way that I simply wouldn’t have thought an Elise would enjoy. There is still no limited-slip diff, so although you can get some sizeable angles of oversteer if you lift and provoke, the car feels best when it’s juuuust sliding a bit more at the rear than the front.

The idea of those wide front tyres was a little worrying when I read about them on the spec sheet, as the S1 Elise was notorious for having a bit too much front grip and a tail that was very hard to catch once unsettled. But on track the Cup 260 was incredibly friendly. Slides were telegraphed early and could be caught easily.

Through the last corner before the pit exit, a quick left-hander, the car always felt like it was teetering on the edge of oversteer from the moment you turned in, yet every lap you could commit with confidence. Even when it did slide, you never worried about getting the car sorted out for the rapidly approaching right-hander.

Is the steering as wonderful as ever?

Oh yes. It’s still everything you would hope for from Lotus, with bags of feel letting you know exactly how hard you’re pushing the Yokohamas. You can also really attack kerbs without fear of unsettling the little Elise (and it does still feel like a little car).

Through the fast Windsock corner on the Hethel test track you can really feel the aero helping you carry speed, and then the fact the 260 has a dry weight of just 852kg is really noticeable on the brakes as you lean hard on the middle pedal approaching the second gear chicane.

Every time I steeled myself to brake a bit later I always found I could have waited later still. Perhaps the only thing that I felt I would have liked a bit more of was power. So fun and capable is the chassis, you inevitably want more from the right hand pedal.

But this is a road legal car, right?

Indeed it is, and we did take it out onto the local lanes of rural Norfolk at the end of the day. The big wing might seem a little unnecessary once you’re in surroundings where apexes aren't painted red and white, but at least it’s lofted so high that you can easily see underneath it when glancing in the rear mirror.

With the steering wriggling around even more talkatively over the rougher surface of the road, the whole car feels wonderfully alive. You also have more time to appreciate the rather satisfying action of the six-speed manual (although I wouldn’t recommend looking at the beautiful exposed workings while you’re moving…).

The suspension is easy(ish) to adjust via knurled knobs, which you can reach into the arches and twist. Each damper has a range of 24 clicks, each click adjusting both compression and rebound. For track work Lotus suggests about a third from full stiff and for road it recommends about half way on the two dozen scale.

I would be interested to try it even softer on the road (and there is certainly enough scope in the dampers to do that) but even on the factory settings it managed the bumps with decent compliance and you would happily drive some distance to a track day.

But isn’y an Elise with a fixed roof an Exige?

You make a fine and valid point. The fixed roof is something that initially bugged me. I know that it has to be there for the aerodynamics to function properly, but I like open-top motoring, and consequently the inability to remove the carbon roof on the 260 put a dent in its appeal.

However, the more I drove the car, the more I thought of it not as an Elise at all but an Exige. Not the sort of Exige that currently resides in the Lotus lineup, but a mk3 version of the original Exiges – the ones with the four cylinder engines. Viewed like that, I think this car makes more sense and is even more desirable.

If, like me, you lusted after the original 1995 Elise that cost £18,000, then all Elises will now seem rather expensive, starting as they do from over £30,000. However, look at it as a car in the vein of special track-focussed cars like the Porsche 911 GT3 RS or Lamborghini Huracan Performante and you start to see why the price tag doesn’t look so daft.

This is also being built in very limited numbers, with just 30 due to emerge from Hethel, so it could well be very sought after in years to come. Lotus really is on a roll at the moment.