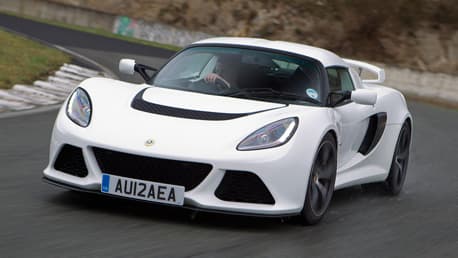 So a new Lotus Exige. It looks a bit… different.

Ah, you spotted the fact this is no mere facelift. The Exige, Lotus’ most hardcore, track-focused model, has been thoroughly overhauled, gaining new design, a rather funky wing and a longer wheelbase to make room for the supercharged V6.

A supercharged V6? What’s that doing in a lovely flyweight thing like the Lotus Exige?

Yes, the Exige used to have a teensy 1.8-litre four cylinder and the new Exige S has the same 3.5-litre V6 as the Evora. This has changed the car somewhat.

By making it heavier presumably?

Yes, by around 240kg. But there’s more than enough power to offset that – 345bhp gives the Exige S a similar power to weight ratio to a Porsche 911 Turbo, and means 0-62mph in four seconds flat even with a standard six-speed manual rather than some super-snappy double-clutcher. Major league performance.

But the Exige was never about power…

No, it was about handling purity, not blunt acceleration. But the feeling at Lotus was that the Exige needed to change tack, to become more habitable, to be an everyday-feasible car, one that you could take to a track day without needing the services of a towbar-equipped SUV and a trailer. The trouble is, adding everyday comfort (and that big V6) ups the weight and loses the focus. But hell, 1176kg isn’t much in the grand scheme of things and Lotus is capable of handling miracles.

Suspected as much. How good is it then?

This might just be a) one of the greatest driver’s cars Lotus has ever made and b) one of the best handling cars available today. Seriously. It’s just sensational. It single-handedly proves that Lotus has lost none of its ability to make cars ride, handle and steer better than just about anyone else on the planet. It’s not just that it’s chuffing fast across country due to the outlandish grip and mighty V6 shove, but that it’s just so pure, so much fun. You can pootle around town and still get loads of enjoyment from the steering response, the way the ride deals with everything with so little fuss. I was skeptical about the Exige’s new direction, the extra weight, but I’m 100 per cent convinced that this is the way to go.

So not a rival for a Caterham or Atom anymore then?

My eyes must be deceiving me, I thought I just read 911 GT3.

It is noisy on long trips and the radio struggles to overcome the road noise. The manual gearshift is also a bit stiff. But this is a hardcore driver’s car, you have to be prepared to make sacrifices. One of them might be your ears. Another your back when clambering in and out. Small price to pay.

But I’ll never be able to buy one because Lotus is having problems, right?

Don’t be so hasty. Yes, Proton, the Malaysian company that owns Lotus, has been bought by an even bigger fish and that big fish is currently evaluating its options. Based on their latest words to the media, there’s light at the end of the tunnel, and we remain hopeful that the ambitious model plans laid down by Dany Bahar will one day bear fruit. After driving this Exige, the thought of never experiencing the 550bhp Esprit supercar fills us with horror.

For more pictures and the full story on the new Lotus Exige, you need the brand new Top Gear magazine – more details here