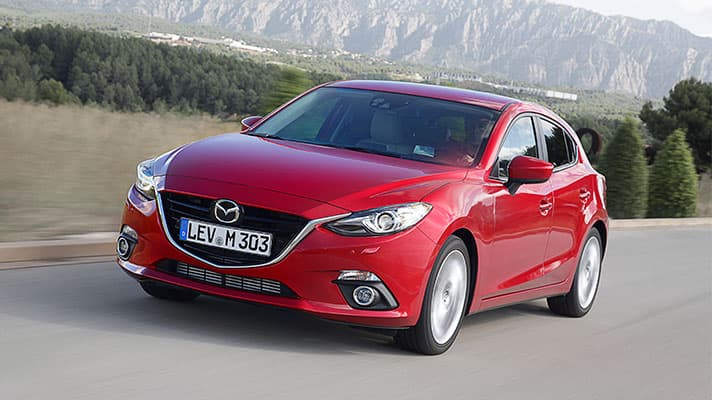 Bigger and bolder," says Mazda, which - in a family-hatchback marketplace rather mired in the ordinary - is no bad thing. So Mazda's new 3 is fairly stand-out, even if the big bonnet and bulbous rear - allied with those sharp converging feature lines on its flanks - do lend a bit of the clown shoe to its proportions.

Mazda is taking a different approach with its engines too, which - unlike the current trend for turbos and downsizing - are on the large side. There is a 1.5-litre petrol, but the 2.0-litre costs just £300 more, emits the same 119g/km CO2 and adds some much needed go. The sole diesel is a 2.2-litre unit with 148bhp.

Mazda calls its engine strategy ‘rightsizing', and that diesel is revvy and eager, if a little lacking in low-down response. Its 107g/km CO2 might deny Mazda a lot of potential fleet buyers, but then the 3's always been a private purchase. More often than not those who live close to their local, friendly Mazda dealer.

With the new model, you might be willing to drive a bit further, as it's rather amusing to do so, more so in this diesel than the hard-worked petrols. The chassis mixes decent ride comfort with real enthusiasm in the bends, the steering being quick and accurate. Not quite Ford Focus in its cornering thrills, but close enough, and better than everything else. Thank its width, which enhances its planted feel and also gives it the widest shoulder room in the class. Those broad shoulders had better be topped by short necks, though, as headroom isn't particularly generous - especially in the back.

The interior is, after the bold exterior, a bit ordinary. Sure, there's a big screen operated by a rotary dial, and there's plenty of kit as standard, but the weird dash-top finish is stickier than a nursery school tablecloth, and the centre armrest is pound-store flimsy. All that equipment is a real draw, though, this 3 undercutting its most obvious VW Golf rival and adding satnav, a head-up display, adaptive front headlamps, internet connectivity, Bose audio and front and rear parking sensors.

Indeed, start crunching the numbers, and the Mazda3 looks like a very worthwhile proposition, though lack of imagination among buyers is sure to see it struggle in the face of its established, big-selling rivals from Volkswagen and Ford. Which is a shame, as to drive it's right up there with the best of them. So long as you can live with that sticky dashboard.