£ 215,275 when new
Paul Horrell
Published: 01 May 2014
comments
Skip 1 photos in the image carousel and continue reading 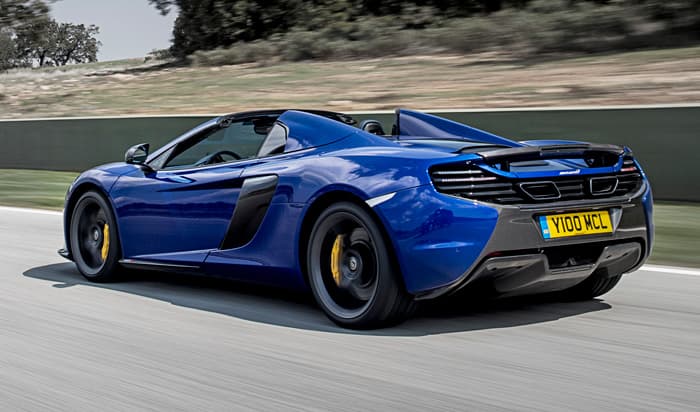 The McLaren 650S was in southern Spain. To join it there, I drove to the airport in a Jaguar F-Type V8S. In the confines of the south of England, the Jaguar seemed absurdly and almost scarily fast. Then I drove the McLaren for two days and flew home. Now the Jaguar's acceleration felt as everyday as a hot hatch's. The new McLaren really is almost preposterously fast. Maybe the F-Type isn't a fair rival, but the McLaren also resoundingly trumps its rivals in the £200k-odd supercar paddock.

How did that happen? You might remember the original MP4-12C served up 600bhp, then was upgraded to 625. Now the 650 makes... well, you can guess. So the absolute wrung-out high-rev power has had just a 4 per cent bump, a margin you barely feel. OK, which I barely feel - maybe you're more sensitive. No, the astounding sense of accessible shove is mostly down to a thumping rise in the torque output in the upper-mid ranges. It's not just some chip-and-boost job, either: the pistons and cylinder heads are new and run new cam timings, the intercoolers and radiators are bigger, the exhaust is new and sounds sharper without being silly. It was worth the effort. While the 12C went through life at 443lb ft of torque, this new car kicks it up to 500lb ft. Floor the throttle at, say, 4,000rpm in, say, third gear, and that's an increase that smites you like a runaway train. And it's happened without adding any lag or highly strung diva grumpiness.

People say McLaren is too much of a numbers company. Well, heck, if you have numbers like the 650S's, why not? In this league of cars, the 0-62 time is a slightly flaky measure of performance; 0-125 is a better measure of what happens when they hit their stride. McLaren says a 650S will do that horizon-munching lunge in just 8.4 seconds, or 8.6 for the Spider. Versus Ferraris, that's out
of the 458 Italia's ballpark, even of the Speciale's. We're in the land of the F12 here. McLaren's diligent engineers have combed over nearly every detail of the existing 12C in search of better numbers, some of which are meaningful, some more arcane, so if your eyes glaze over in the next few lines, don't worry. Here goes: more downforce (24 per cent at 150mph); firmer springs (22 per cent front, 37 per cent rear, but because of its unique suspension design McLaren always uses very soft springs anyway); lighter weight (6kg) in spite of the bigger radiators; faster lap times ("noticeable" - an uncharacteristic imprecision).

But the ever-numerical men and women of Woking have done something else besides. They have made a car that doesn't just distort further the boundaries of speed in every measurable way. They've also got it to tickle you more when you're not going at a track-attack rate. At any speed, it feels more alive, energising you with a vivid sense of its synapses firing and its muscles tensing.

On an interesting road, the 650S is bewitching. The steering is astoundingly lucid: direct, to the point, crisp, articulate. In the Sport chassis mode, the damping is better than ever. Sometimes in a 12C, there'd be a bit of a pogo motion, but here the control is tighter. And yet, as before, bumps and corrugations never seem to slow you down. The stability control and brake-steer set-ups have a steely resolution to clamp the car to the path you've taken. Switch to the Track mode, and body control is even tighter, but the nose will wash out a bit if you're clumsy(I don't remember that before), and the tail swishes around a little more under power. It's the thing only the greatest supercars can do: embracing you and working with you, dancing around the edges of grip.

Go to a track, push harder, and the control is astounding. I'm not a racer, but I'm lost in admiration for the trust the 650S gives me. There's extra control in the rear suspension now, so when you lift or even brake into a bend, it'll rearrange its attitude and tighten the line, but I never got the sense it was going to go too far. And then on the way out, it finds the traction to cope with that gale-force turbo boost.

The 650S replaces the 12C. It was meant as an addition, but when McLaren launched it, no one wanted the older car, so the 12C was euthanised. But guess what? The 650S isn't better in every way. I think the 12C is the better-looking car. The 650S really does wear the habit of a facelift, its two-tone central intrusions on the nose and tail confusing the original proportions.

And although the new dampers (similar to P1 units) do allow brilliant secondary ride comfort, the firmer springs mean the 650S simply isn't quite as supple as the 12C when you relax it into Normal chassis mode and aim it down a motorway, or get into the daily urban grind. In a 12C, I often used Normal mode, but in the 650S, once you've tasted the fruit of Sport mode, it's hard to go back. Normal dulls the steering without giving much back in ride comfort. But let's not get this out of proportion: there's only one supercar anywhere near as civil as the 12C, and that's the 650S.