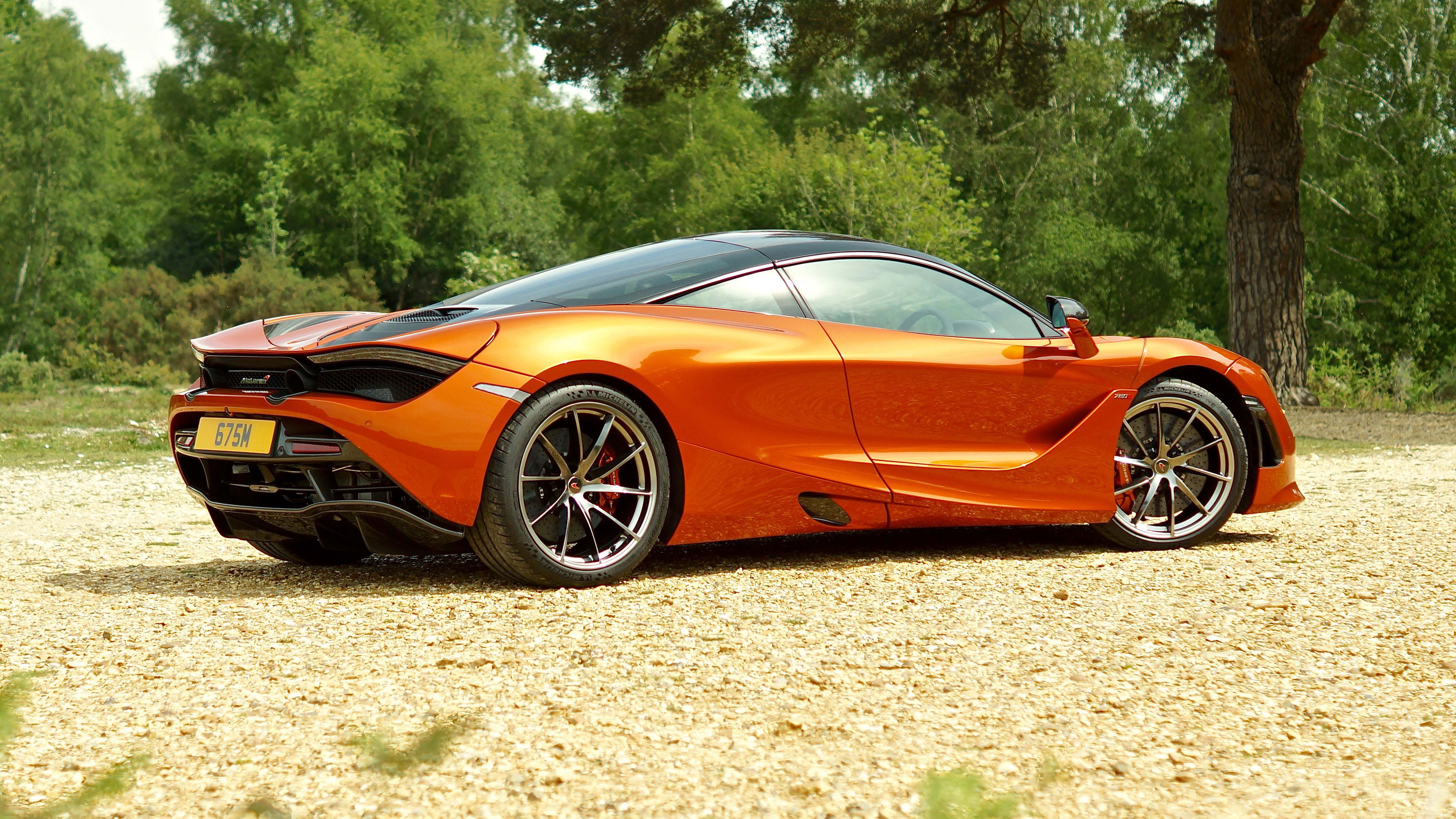 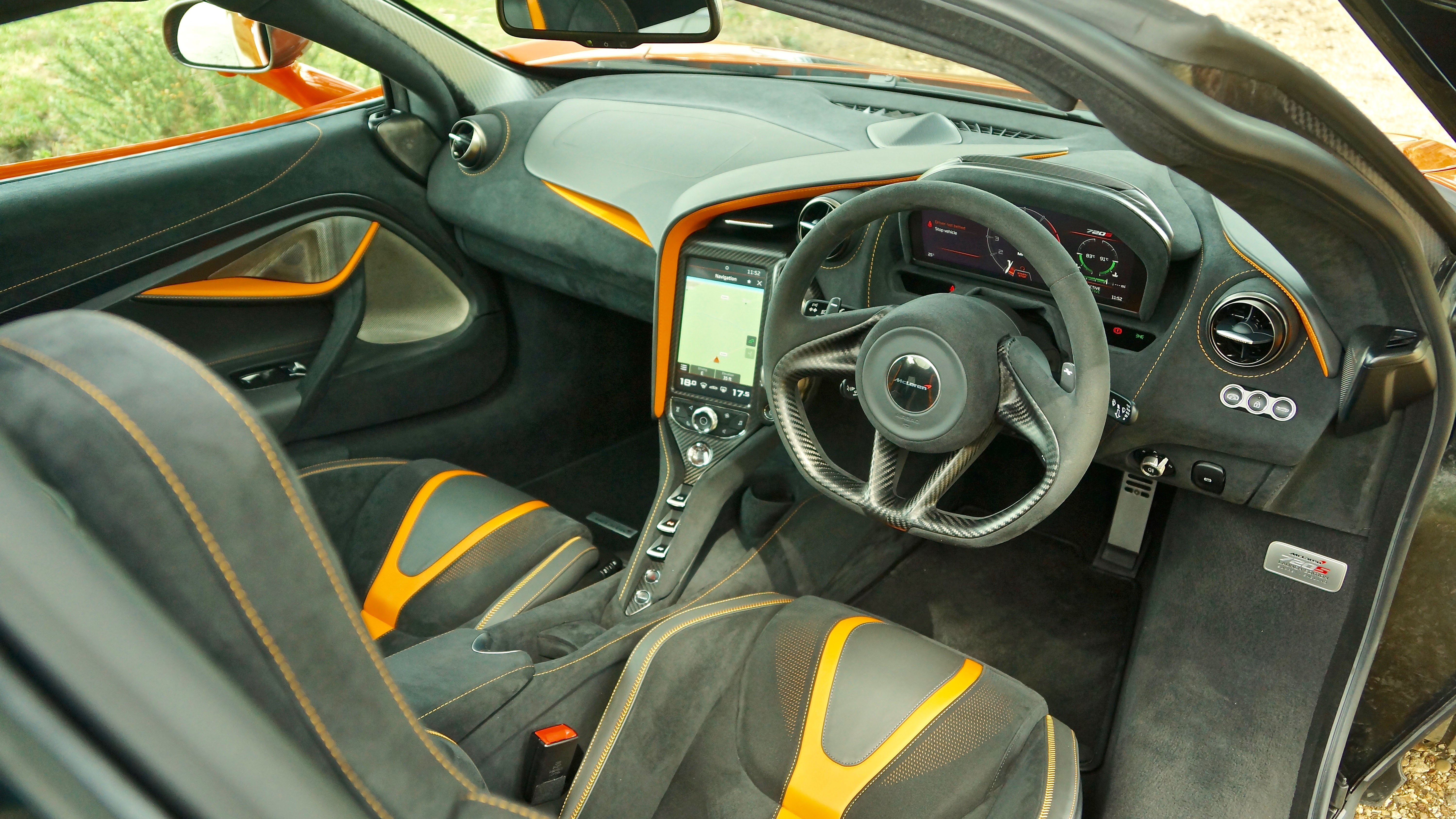 OK, so what’s different about this McLaren 720S?

Did the 720S really need more of that?

Only for bragging rights. Because if you remember when we reviewed the 720S a couple of years ago, it’s one of the very fastest cars we’ve ever tested, 0-100mph in 5.3secs, quarter mile in 10.19secs @146mph. It needs more speed like Love Island needs more fake tan. And in both cases the result of application could be extra brown. Just in different places.

I’m in agreement. So how much more power are we talking?

The small matter of 128bhp. Up from 710bhp (720ps in metric measurements) to 838bhp. Torque climbs almost 100lb ft as well, from 568lb ft, to 663lb ft. Which is the same as a Bentley Bentayga Speed. But in a car weighing half as much. And all this has been achieved with nothing more than the liberal application of some ones and zeros to the ECU.

OK, that’s not quite true. DMS will carry out a simple ECU update for £3,600, but that only gets you 820bhp and 641lb ft. To unlock the full ticket figures you also need the £4,200 high-flow exhaust cats. So that’s £7,800 in total, which is a lot. But this is a McLaren 720S, and you’ll have already spent a lot to own it. Especially if you couldn’t resist the carbon packs – you can easily spend £25,000 on those. And that’s just for the outside. McLaren’s sports exhaust is the best part of £5,000 and that gets you no extra ponies.

But what about my warranty?

This isn’t a factory sanctioned modification, so it will invalidate your warranty. Now, what DMS claim is that the upgraded software is practically impossible to find, but they do offer to revert the car to standard for no charge, and then re-upgrade it again for free. If you were, say, sending your car in for a service. They’ll also reapply the mods FOC if a manufacturer software update over-writes the ECU.

Do you find your car slow?

Er, no. In fact I’m quite scared to put my foot all the way down. But I do like bragging to my mates.

Then go right ahead. And be prepared to be a little more scared when you do put your foot all the way down. Although weirdly, it doesn't feel instantaneously faster than standard. That’s because the characteristics of the power band are the same, as is the noise. DMS claims the high-flow cats give the noise more intensity, but without driving them back-to-back I was hard pushed to spot a difference.

More than that, it doesn’t feel that much faster initially because any 720S is fast enough to give you brain lock. It’s only after repeated exposure that I began to work out where and how it was different – it just feels faster the more you experience it, which is the converse of just about every other supercar.

The first surge of power comes in with a bit more aggression now, and the throttle feels keener. This is good, it feels like there’s less turbo inertia – although response still isn’t in the same league as a Ferrari 488 GTB. But what happens at 5,500rpm really tightens your grip. From there to 8,000rpm and beyond it's utterly frantic. The 720S becomes massless, accelerating like an atom in the LHC. Do this in second or third and you feel the tail squat, the nose rise slightly and start to surf as the front wheels try to keep things pointing in the right direction. In the standard car you’re not nearly so aware of this rearward weight transfer. Nor can I remember thinking the standard car’s brakes needed to be stronger. But here I thought they needed more instant bite at the top. Just that extra bit of reassurance.

Are there actual numbers?

The most relevant one I can give you is the 60-130mph time, as that negates traction/surface differences. The standard car smashed that in 5.39secs, which, when you think about it, is utterly mad. In order to go from 0-70mph in that sort of time you need a BMW M2 or a Porsche Cayman GTS, let alone to pile on 70mph when you’re already doing 60mph.

Anyway, the DMS car recorded 4.34secs for the same increment. A second faster than standard, and equivalent to the 0-70mph times of cars such as the Honda NSX and BMW M5 Competition. So yes, it’s faster, a bit more vigorous. But I’m sure you’ll have spotted the same flaw that I have with this.

You’re only legally allowed to use the first half-a-second or so of that acceleration. After that – very, very soon after – you’re travelling at speeds that will not only leave the police helicopter behind, but will require the constables to keep their radio messages to their colleagues several miles down the road very succinct indeed.

The gains – significant on paper, less detectable in reality – are by and large unexploitable unless you’re at a Run What Ya Brung. On the road the best way to get a feel for the new found shove is to keep the pressure building in the turbos through a number of gears: get the blowers spooling low down in third and then use a bit of the mid-range, flicking up through fourth and fifth. It’s like the 4.0-litre V8 twin turbo is being fed denser, thicker, chewier air on which to feast. It’s oddly compelling.

Anything else to report?

This car ran on Michelin Pilot Super Sports instead of the standard fit Pirelli P Zeros. There’s quite a bit of road noise, but they have a bit more softness to them, perhaps more give in the sidewall. Might account for the back axle squat.

And I still reckon the 720S is the most able supercar of all. The airy, habitable cabin, the practicality, the low speed docility, the ride quality. Tyre noise (and yes, occasional IRIS infotainment system and quality glitches) aside, this is an almost vice-free supercar. Less histrionic, more focused on the actual driving. Now with added zip.