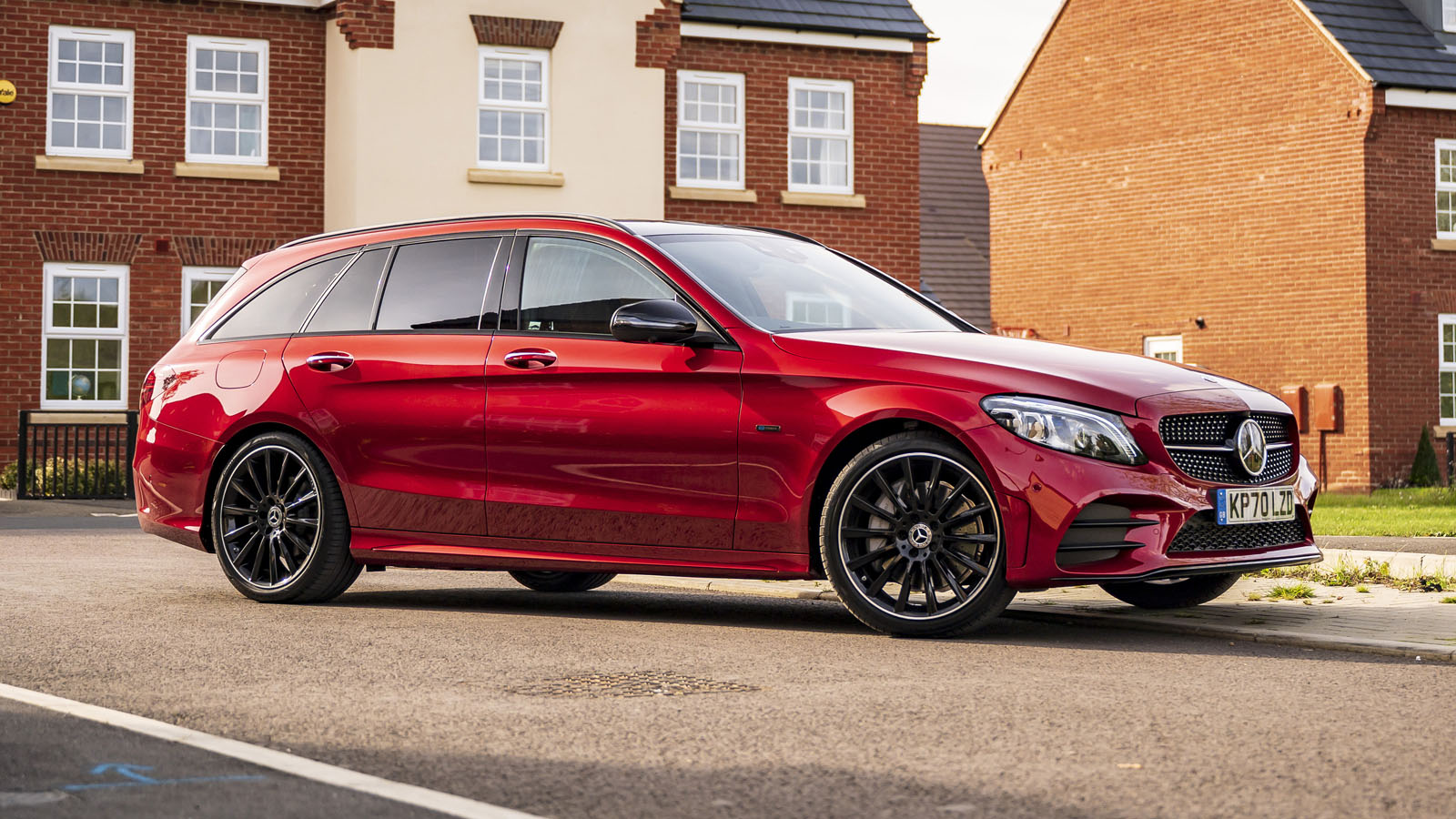 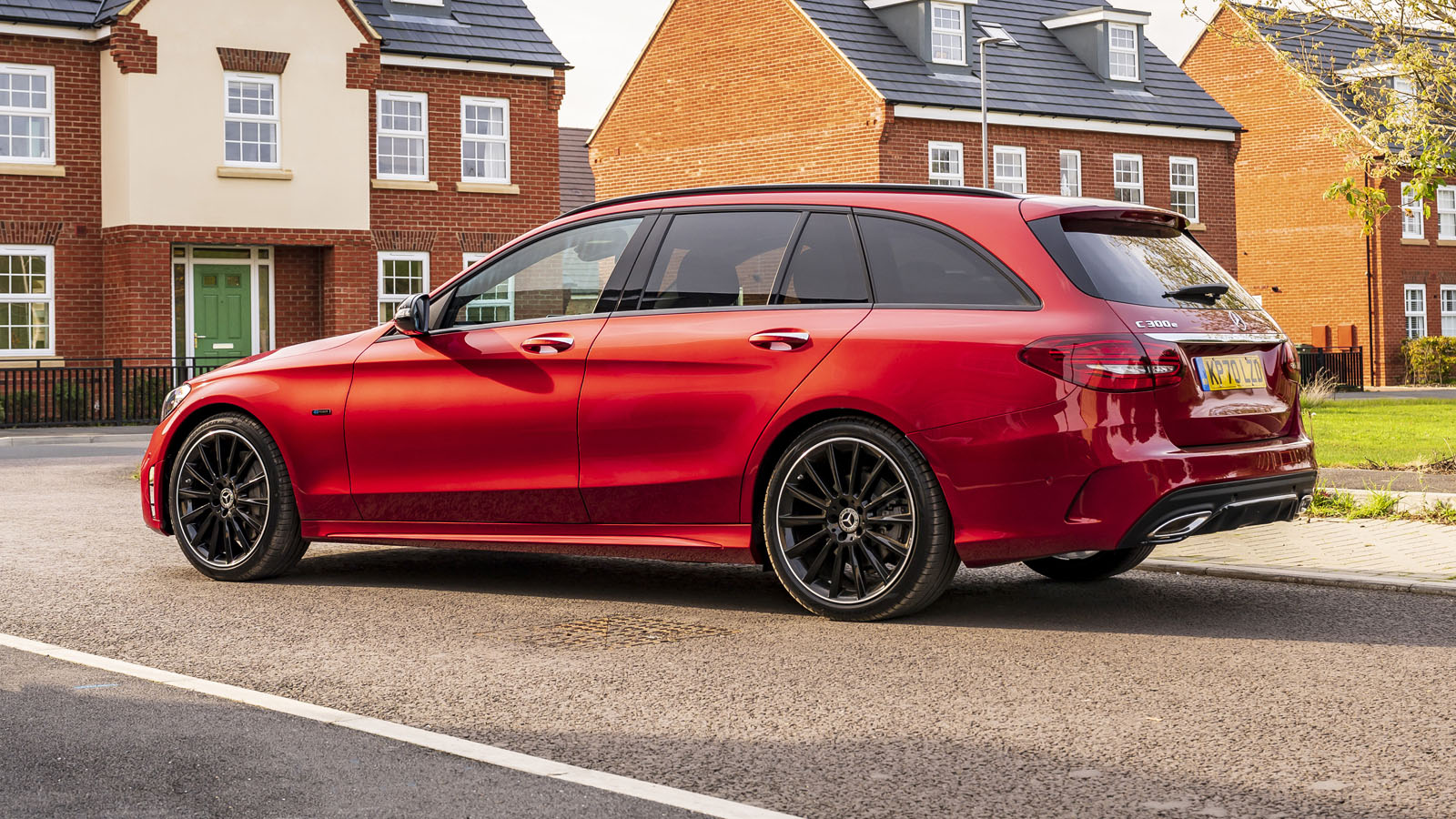 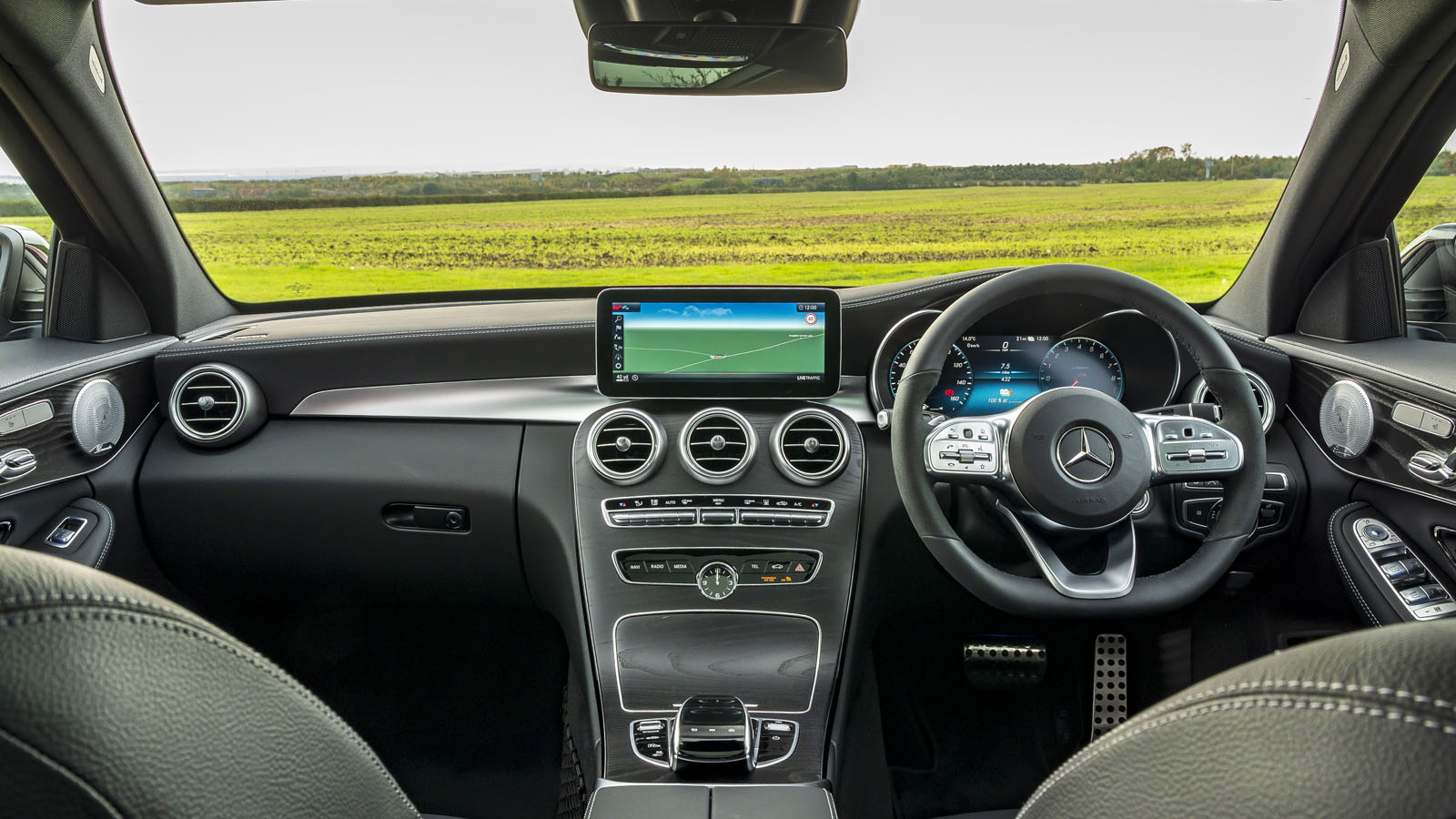 Aye – in the last couple of weeks we’ve driven an electrified A-Class, GLA and GLC. Now it’s the turn of the ubiquitous C-Class in C300e spec – that means we’re working with a 208bhp 2.0-litre four-cylinder petrol engine and 120bhp electric motor.

The GLC300e uses this same drivetrain, but it gets all-wheel drive while the C has to make do with rear-wheel drive. No biggie.

Charging takes five hours on a normal three-pin or 90 mins on a 7kW wallbox.

Combined output is 316bhp, so 0-62mph flashes up in a properly quick 5.5 seconds. Meanwhile the 13.5kWh battery apparently gives 34 miles of electric running.

… does it really, though?

No of course not. From a 95 percent full battery I got 19 miles, but I reckon you could get 25 miles or more around town. The C300e is quick away from the mark in e-mode and punchy enough at higher speeds, but don’t get carried away – the quicker you go the less far you’ll be able to travel without calling upon the internal combustion engine.

The A-Class, B-Class, CLA and GLA use a thrashy, unbecoming 1.3-litre petrol that’s really quite unpleasant. Especially at higher revs. Happily the C300e’s 2.0-litre is night-and-day better – it whirrs into life without so much as a tremor through the seat, pedals or steering wheel and is smooth and quiet once it’s up and running. Takes a second if you catch it unawares, but so do other PHEVS. Stick it in Sport or prime it with the paddles if you might need to overtake.

Speaking of paddles, the nine-speed auto is nice and smooth and responds faithfully to manual intervention. Makes good decisions and doesn’t hang on to gears for too long, like the A250e’s eight-speed.

Guessing it has other MODES?

Obviously. There’s a set for dynamics – Eco, Comfort, Sport, Sport+ (yes, really), Individual – and another for the powertrain. Unusually the 300e starts in Hybrid mode, but you can force it to use e-power, charge the battery if it’s low (don’t do this, it’s more efficient to find a plug) or hold what charge you have until later. Which is all fine if you like that kind of thing, but it’s cleverer than you, so best relax and let it do the thinking.

Correct. The smoothness and silence of the powertrain is backed-up by a cushy ride (on the air suspension of our top-spec test car, anyway), excellent stability on the motorway, decent steering and well-judged brakes, which makes it much easier to stop smoothly in the C than other PHEVs. Pity you can’t adjust the level of regen in e-mode.

Heavy car mind, with a kerbweight of 1,870kg, and feels it when you push on. Buy a more dynamic BMW 330e if you really want to have fun in a PHEV, but consider the Merc if you’re a bit more chill.

Main one is the boot. PHEVs tend to lose a bit of boot space versus conventionally powered cars. Usually it’s under-boot storage, which you probably don’t need or use day-to-day anyway. But the C’s boot is majorly compromised by the box of batteries that lives behind the rear seats (take a look, pics 10 & 11 in the gallery).

Annoying in the saloon and moreso in the estate, because you can’t fold the seats flat and slide flat-pack up to the backs of the front seats. You’ll live with it, but other PHEVs are better packaged. Blame the C’s age – the current car was revealed in 2013 and is up for replacement soon. The new car will be better. Hopefully.

It’s one of the better PHEVs we’ve driven recently far as actual driving goes, but it’s not massively efficient and the packaging of the batteries and e-motors leaves a little to be desired. Still worth considering if you’re looking at the equivalent BMW or Volvo.