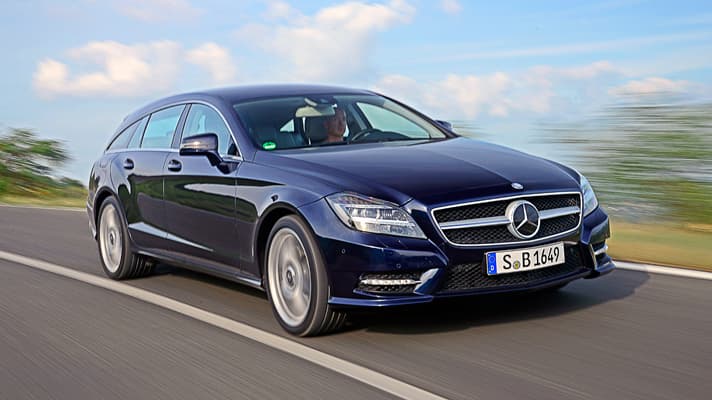 Statement of the obvious warning: this is a practical car. It has a boot of many litres, can be had with a towbar, has rear seats that do the split/fold thing and something called underfloor storage. But then so it should - it's an estate car.

Only it isn't, it's a shooting brake, and therefore it's different. Can't tell how exactly, because it has the right number of doors and the overall layout is uncannily similar to an E-Class's. And besides, if we're being pedantic, then strictly speaking isn't a shooting brake a two-door coupe with an estate back? Certainly the cars that Mercedes reference - Scimitar GTE, Volvo P1800, Aston DB5 Shooting Brake - conform to that description.

But it's no good trying to split hairs in the brave new world of automotive niche-busting. You can see that Merc is trying to trendify the estate, so let's leave it at that - first pausing, of course, to recognise the headache the arrival of this car must be causing for Audi and BMW. With the A7 and 6-Series Gran Coupe, they've only recently caught up with the CLS ball that Merc started rolling back in 2004, and now they're on the back foot again.

It does change things, the CLS Shooting Brake. And not just because parents with three offspring won't be disappointed when they peer into the rear compartment. It's visually dramatic, a versatile car that actively tries to disguise the space inside, although that's hardly surprising, given that Mercedes freely admits that in the give-and-take tussle between designers and engineers, the designers were allowed to win. It's the reason your luggage has to be manoeuvred over a little lip before it drops into the boot.

But you won't care about that, because you'll have specced your car in designo Magno Cashmere White matt paint, which makes the darker glass stand out and the window profile look like the cross section of a wing. That's pretty cool. Moreover, the Shooting Brake has a more resolved back end than the ‘coupe'. The four-door's rear three-quarters can look rather heavy from some angles, but here the roof and window lines work harder to successfully draw your attention. It's a svelte thing, a marginal 16mm longer (but 95kg heavier) than its sibling.

And it is genuinely big inside. The Shooting Brake has a 590-litre boot - roughly 30 litres bigger than either the Audi A6 Avant or BMW 5-Series Touring can muster, and they're ‘proper' estates. OK, so it loses that advantage when you tug the little handles inside the tailgate to flop the seat-backs forward, but 1,550 litres is big enough for all but the most wardrobe-heavy Ikea runs. And if you spec the £4,030 American cherry wood floor, there's amusingly little friction for your loads to overcome, so they slide and crash entertainingly around. That feature is standard in China, although I'm not sure what, if anything, to read into that.

The solid console that divides the two rear seats in the saloon has been clad in leather and fitted with its own seatbelt, making the Shooting Brake a proper five-seater, but that's about the sum total of the interior changes. That's no bad thing, as the CLS is a blissfully easy car to get on with. Controls are where you expect to find them and work logically (with the exception of the deeply irritating foot-operated parking brake). The interior design is elegant, and quality is beyond criticism. It's a hushed, comfortable, relaxed ambience, the only detectable differences from the saloon being a faint sensation of more volume behind you and the arched roofline reflected in the rearview mirror.

A pair of diesels will form the backbone of the UK engine range (you can read about the sole petrol version here. You'll want to, as it's more powerful than both oil-burners put together). These two are familiar from the standard CLS - a 201bhp 250 CDI and the 261bhp 350 CDI. If you can bring yourself to spend £49,360 on nothing grander than a four-cylinder diesel then fair enough, but we'd find the extra £3,640 needed for the added pair of cylinders. Mostly because we're a bit vain like that, but also because the bigger engine is markedly smoother, swifter and more in keeping with the CLS experience.

Which is something to relish. Despite the extra mass and a fraction more rear bias to the weight distribution, the Shooting Brake drives just as neatly and precisely as the saloon. You wouldn't call it sporting exactly - the whole tone of the car isn't sporty so much as... satisfying. It aims to be effortless, and it is. That's not to say it wafts and wallows around, as there's actually a hint of steel to the self-assurance with which it controls roll, and the natural electro-mechanical steering is little short of a delight to use.

Quick recommendation: if you can, spend £1,150 and upgrade to the full air suspension. As standard, the Shooting Brake features conventional spring/dampers up front and air suspension at the back, and this causes a slight discrepancy in the ride - the front being a fraction harsher.

Even so, the Shooting Brake is an estate that likes to be driven. It's one of those cars that makes progress - swift, even, unruffled progress - and, in 350 CDI trim, has punch enough to thrust itself out of corners. It's not fun as such, more that you get a deep sense of satisfaction that the car is doing its job better than you suspected it could.

Two trim levels are available, standard and AMG Sport, the latter a £3,000 uplift, but worth it for the full LED headlights, 19-inch AMG wheels and a subtly powerful bodykit, plus upgraded suspension, brakes, steering wheel and pedals. So, £55,995 buys you the CLS Shooting Brake you actually want - a 350 CDI AMG Sport - and, if you've done your homework, you'll have realised that's the best part of a £15,000 markup over the equivalent E-Class wagon. If you're questioning the rationality of that, the Shooting Brake probably isn't the car for you.