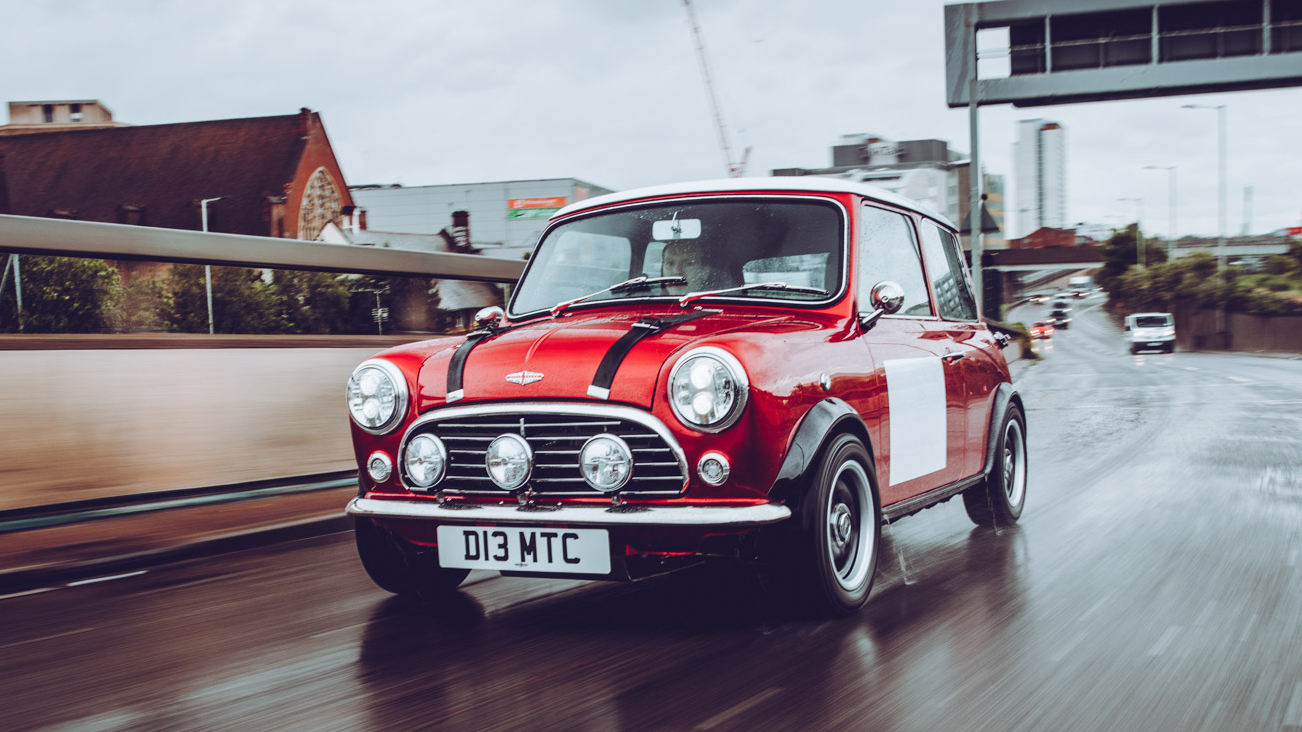 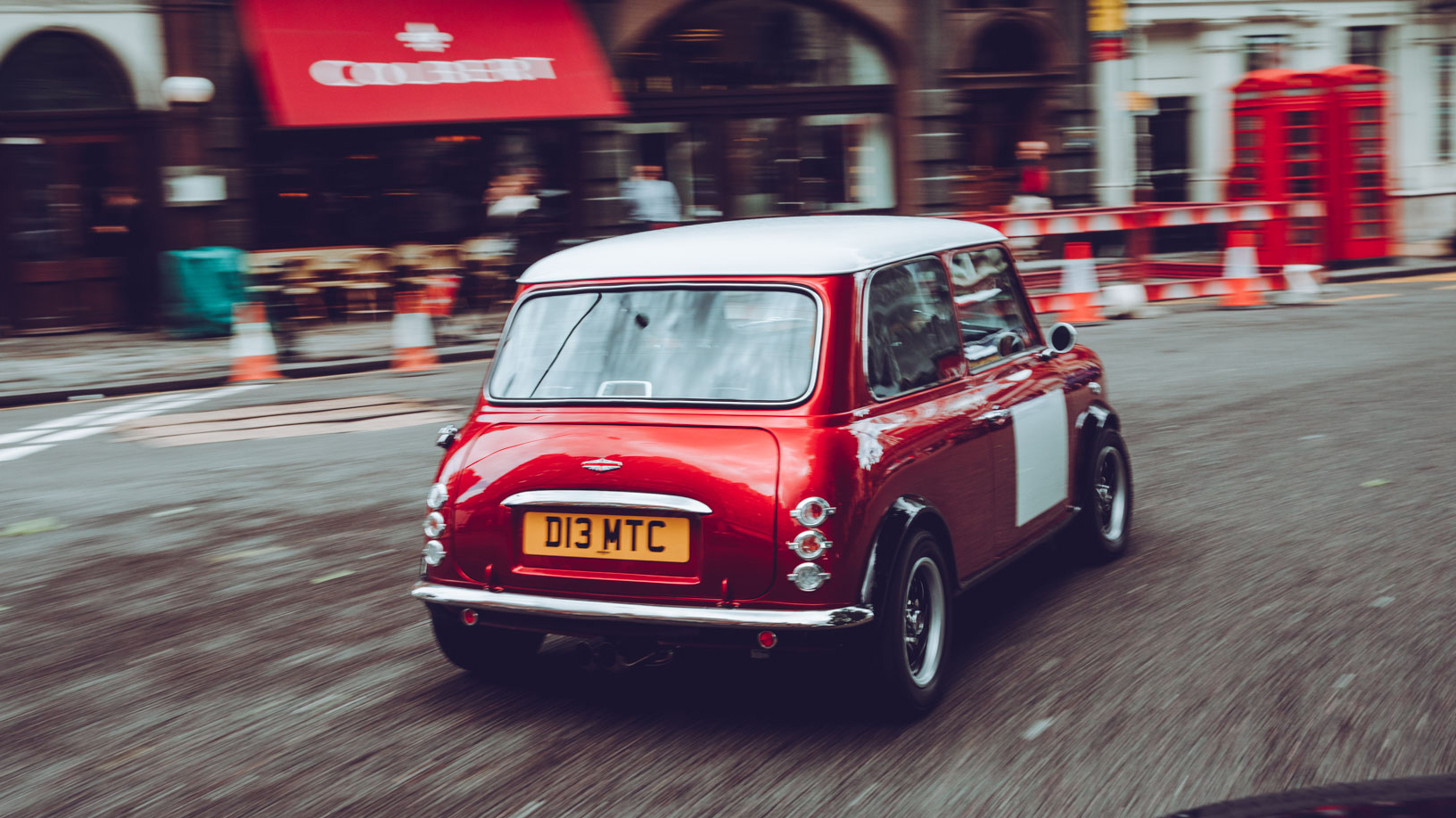 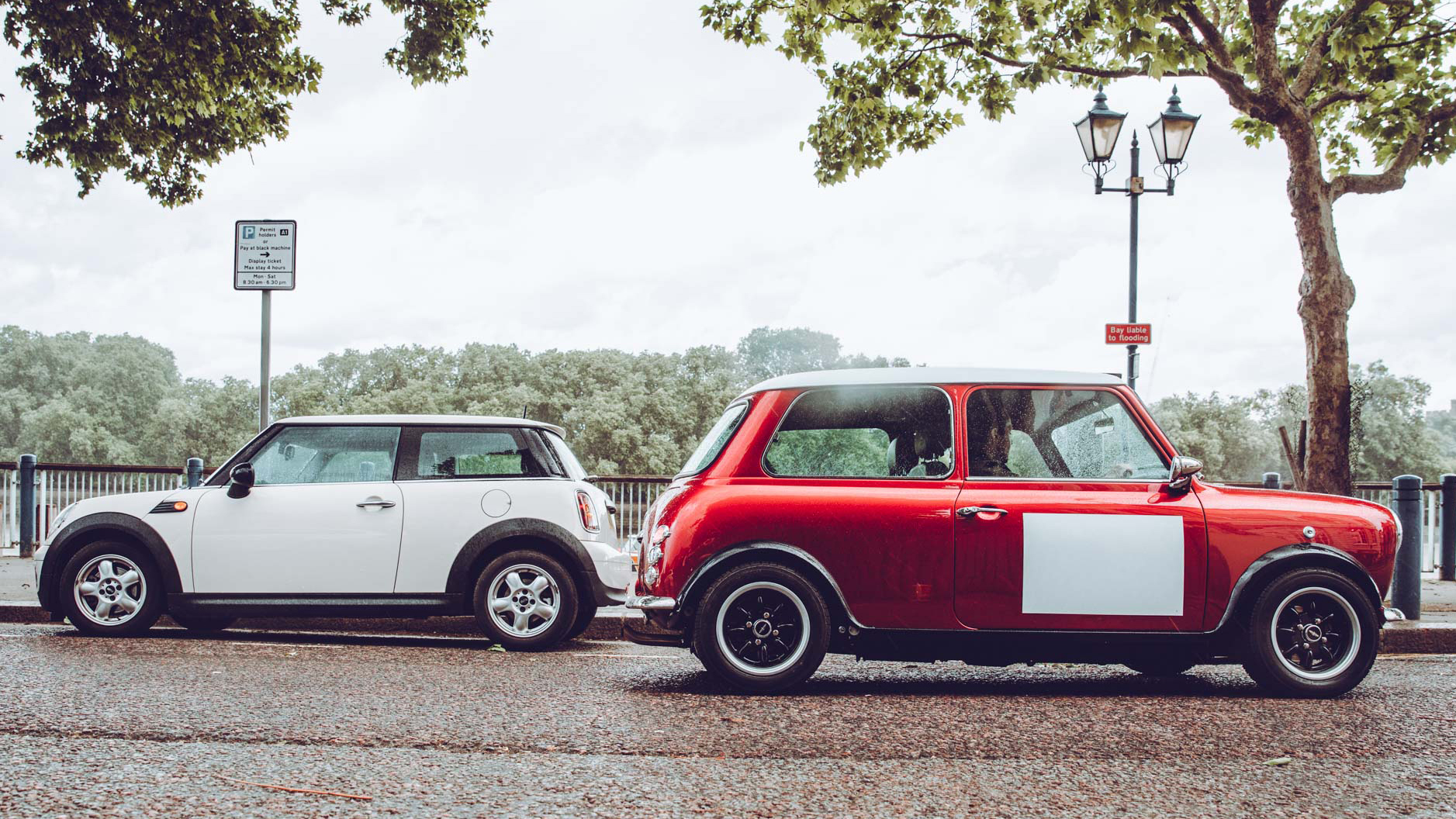 Hang on, this isn’t a new car.

It is, sort of. It’s called the Mini Remastered and it’s the work of formerly Coventry, now Silverstone-based coachbuilding start up, David Brown Automotive.

The idea is to take an original Mini, pull it to bits and put back together with original(ish) looks on the outside, but thoroughly modern innards.

Taking a car as universally-loved as the Mini and altering it, but with a light touch to preserve the goodwill towards it, is hardly an easy job. Just ask BMW. But that doesn’t mean it can’t be done: Singer Vehicle Design took on the 911 and by retaining the charm and originality of the 964 in some areas, and massaging it in others, the results are so cool it physically hurts.

Perhaps that’s the best way to think of this new Mini Remastered by David Brown Automotive – it’s an original Mini that been Singer-ised – albeit in Silverstone, not Sun Valley, California.

You probably haven’t heard of it, and we don’t blame you. Its only other model – the £600,000 Jaguar XK-based Speedback GT – was hit and miss in the design department, and shockingly expensive.

To date it’s sold 12, which is good going if you ask me, but the Mini Remastered is the breakthrough second album. Built at its new 18,000sq ft factory, the goal is to initially produce between 50 and 100 examples a year – each bespoke to the customer’s requirements.

It’s a car that taps into our hunger for retro design, but without the ubiquity of a modern remake. Or the need to be on first name terms with your local AA recovery team.

To understand this car, we must get our heads around the work that goes into it, because it isn’t a quick refurb to the bits you can see, it’s a ground-up restoration with essentials for the modern city type added along the way.

In order to retain the chassis number of the donor car, you only have to use the chassis itself, and two of the following: the suspension, the steering assembly, both axles, the transmission or the engine. What we have here is the original chassis, bolstered for extra stiffness, plus the original 1.3-litre engine and four-speed manual – both fully refurbished to better-than-new condition. The rest, therefore, is all replaced.

Exterior panels are de-seamed for smoother, uninterrupted lines, the interior is entirely new and trimmed in five hides of (fantastically aromatic) British leather, while hand painting it is a reassuringly laborious 400-hour process.

Our test car was one of 25 ‘Inspired by Monte Carlo’ special editions so gains side decals, leather bonnet straps, a triplet of front spotlights, the deletion of power steering, and a modest power bump for a not-so-modest price increase…

Essentials for the modern city type you say?

An all-in one infotainment touchscreen with sat nav, Bluetooth, Apple CarPlay and DAB is neatly integrated into the dash, two USB ports are snaffled away in the boutique glovebox and the front windows are electric. There’s even a blipper for the remote central locking, a push button start and there’s a cup holder down by your ankles.

It would be nice to say I could all do without these features, and that driving a classic should be time to cocoon yourself from the noise, to clear your mind and concentrate on the weight of the pedals beneath your feet and spindly gear lever in your hand.

But within 28 seconds of climbing in I’ve got my phone plugged in to the USB, the Bluetooth hooked up and the radio blaring crystal-clear DAB pop. What can I say? I’m weak.

Interesting. What hasn’t been updated is the driving position. On first acquaintance, you feel like an adult sitting on toddler-sized furniture – knees up around your ears, the wheel plonked in your lap, then offset slighty and tilted away from you. The result is you wind the lock on and off like you’re driving a bus.

Fortunately, after an hour or so it simply ceases to be an issue – in fact it’s perfectly comfortable, with your elbows braced against the door handles and feet tapping away on the pedals.

The seats themselves are pleasantly squishy, with just enough shape to hold you in, and the feeling of space is impressive given its Lilliputian dimensions – there’s even a beautifully trimmed boot with a spare wheel cover painted to match your roof. It’s the details that count. 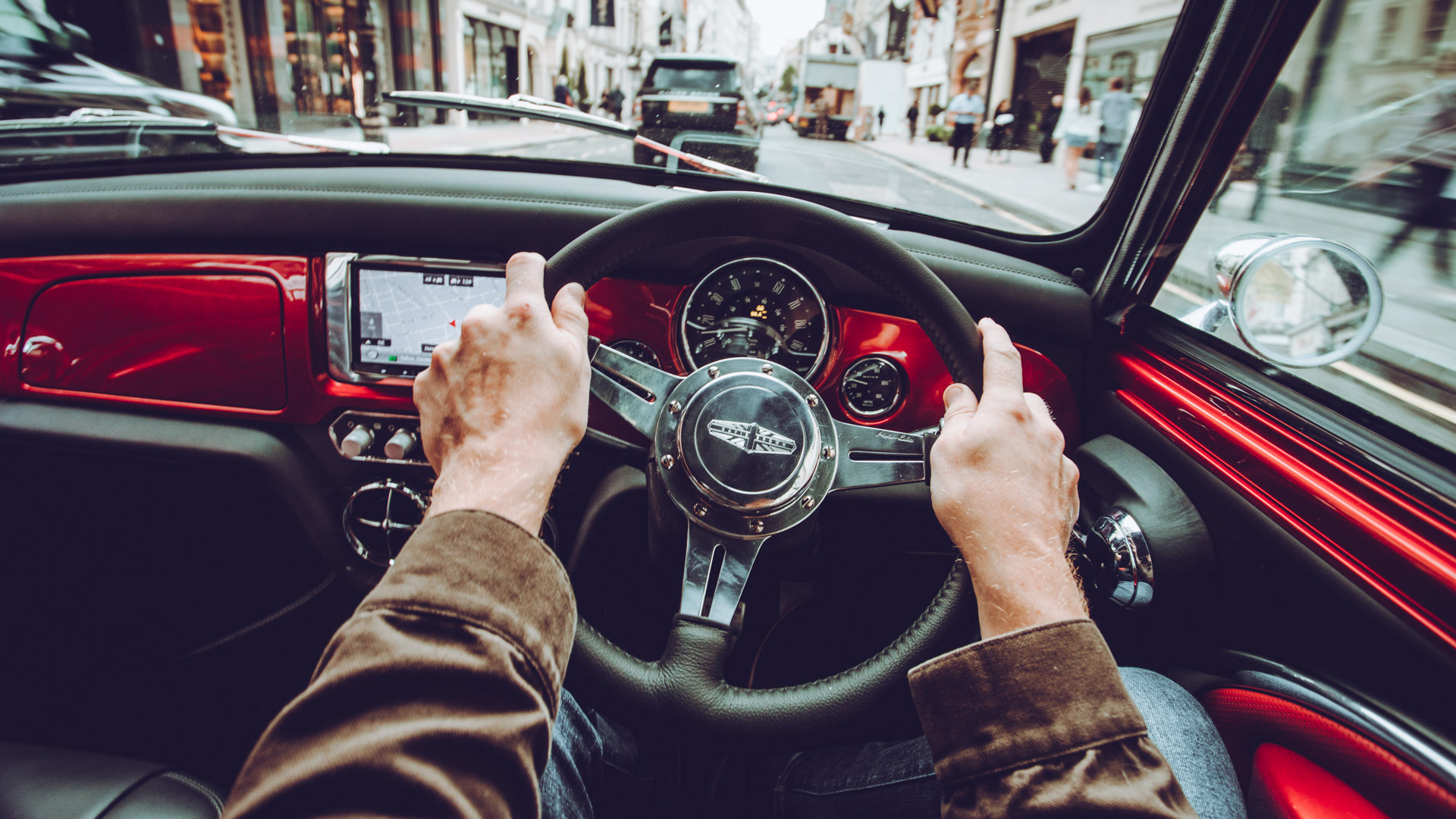 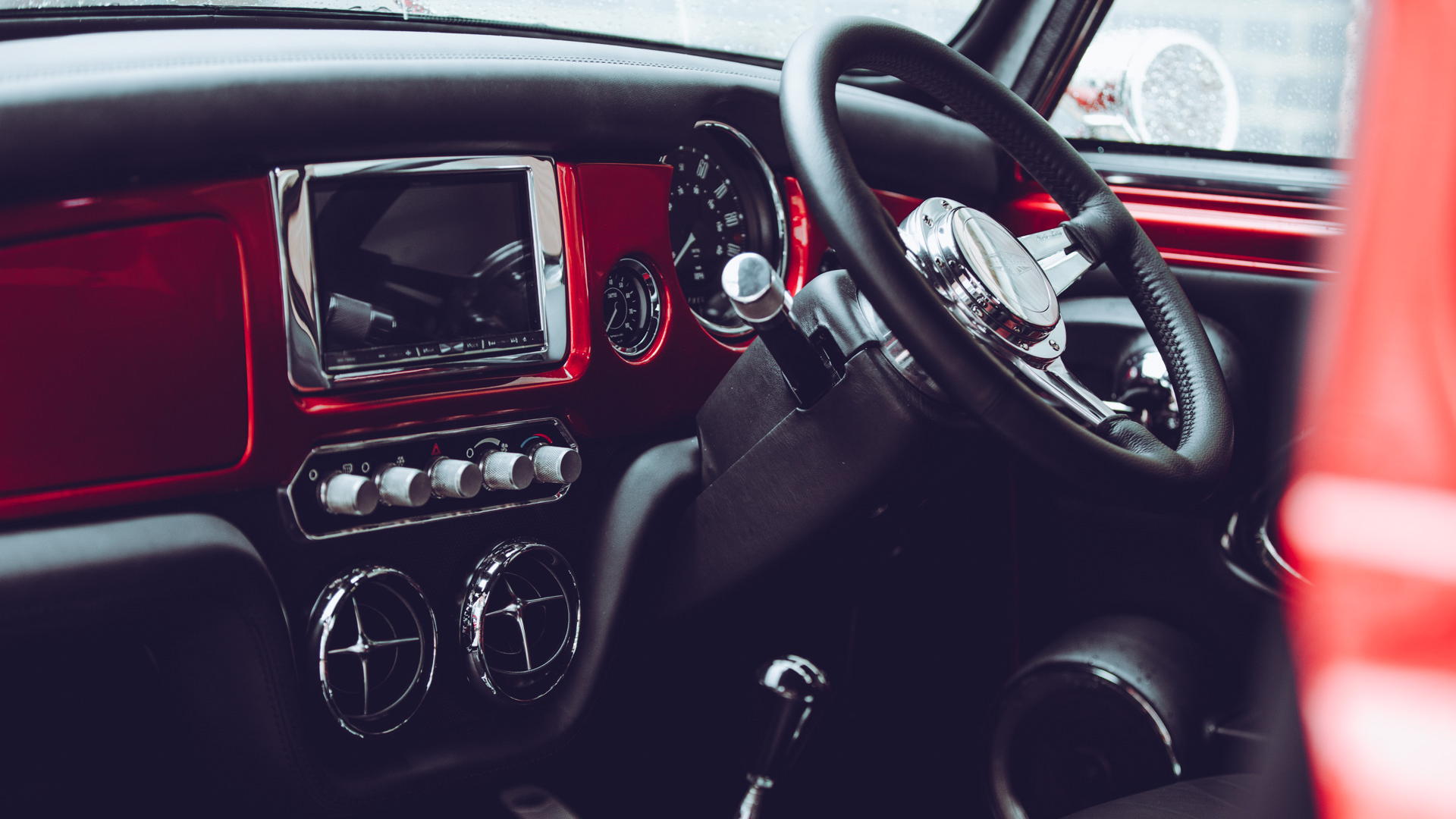 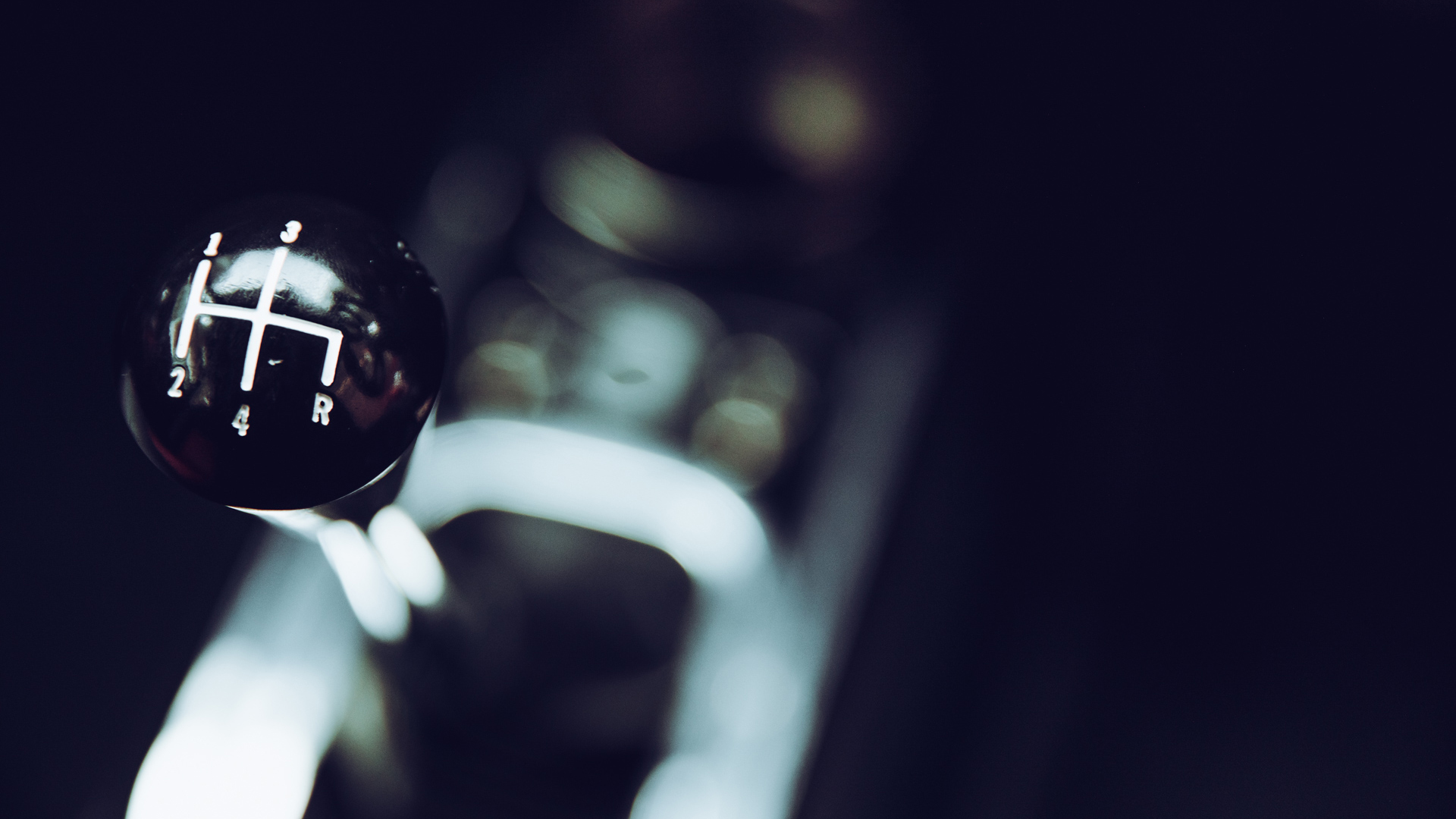 Still a proper Mini to drive, then?

Absolutely. For starters, the engine is authentically unrefined. I discover this after three stabs at the button to fire it up -  cylinders rattling away in front, exhaust booming away behind. I shall later discover that said boom is deafening between 55mph and 65mph, and above 70mph the whole car feels like it’s about to self-detonate. As I said, authentically unrefined.

But none of that matters because it’s just as much of a hoot as it’s always been – more so, in fact, since the gearshift is tighter and more precise than it ever was, and this Monte Carlo model is producing a positively barmy 98bhp (you get 75bhp as standard). This is still not a fast car, but the way it gnashes through the gears, booming and parping as it goes, door handles and motorcyclists knees rushing past at eye level, it feels fast. Not much to write home about in a straight line, but point to point it’s like a Spaniel after a stick.

Corners are where it gets really fun, because the disc brakes, although perfectly capable, are largely surplus to requirements. Just bung it into roundabouts and intersections and it scampers its way around – no lean, no fuss. It’s bloody hilarious. You still pogo off bumps, but the damping has taken a giant leap – there’s actual body control here.

I am. The greatest compliment I can pay is that it still feels different; wonderfully, willfully special in a way that no modern small car, stuffed with airbags and crumple zones, possibly can.

But let’s not get carried away here, It’s not perfect. I get the sentiment behind the lack of power steering on this Monte Carlo model, but the increased feel when you’re up and running isn’t worth making low speed manoeuvres such a bicep-burning faff. Especially when you’ve still got air con, plump leather seats and sat nav. A stripped-out Paddy Hopkirk special this is not.

Then there’s those embossed leather bonnet straps - gorgeous on first sight, embarrassing on closer inspection. They’re not strapping anything down at all, they’re glued on for Retro effect. Delete. And I’ll let you make your own mind up about those LED rear lights… for me there’s something not quite right.

But I’m splitting hairs, really, because most of the above can be undone with careful navigation of the options list and what matters is that it’s an honest but enhanced interpretation of what the Mini Cooper always was: tiny, nimble, eager and highly amusing.

You seem to be avoiding the price…

Problem is, once you know, you can’t un-know, and it colours your opinion quite dramatically. Sitting down?

It costs £75,000 as standard, but in ‘Inspired by Monte Carlo’ trim, you’re looking at £99,000 all-in. Ridiculous, extortionate, outrageous; say what you like, it’s not getting any cheaper.

But then perhaps the price is part of the appeal – it changes the Remastered from being something that, at £40k-ish, would be merely pricey, to a must-have accessory for the super-rich. Shame, because more people should be able to experience the joy of driving a Mini that’s fitter than the day it left the factory.