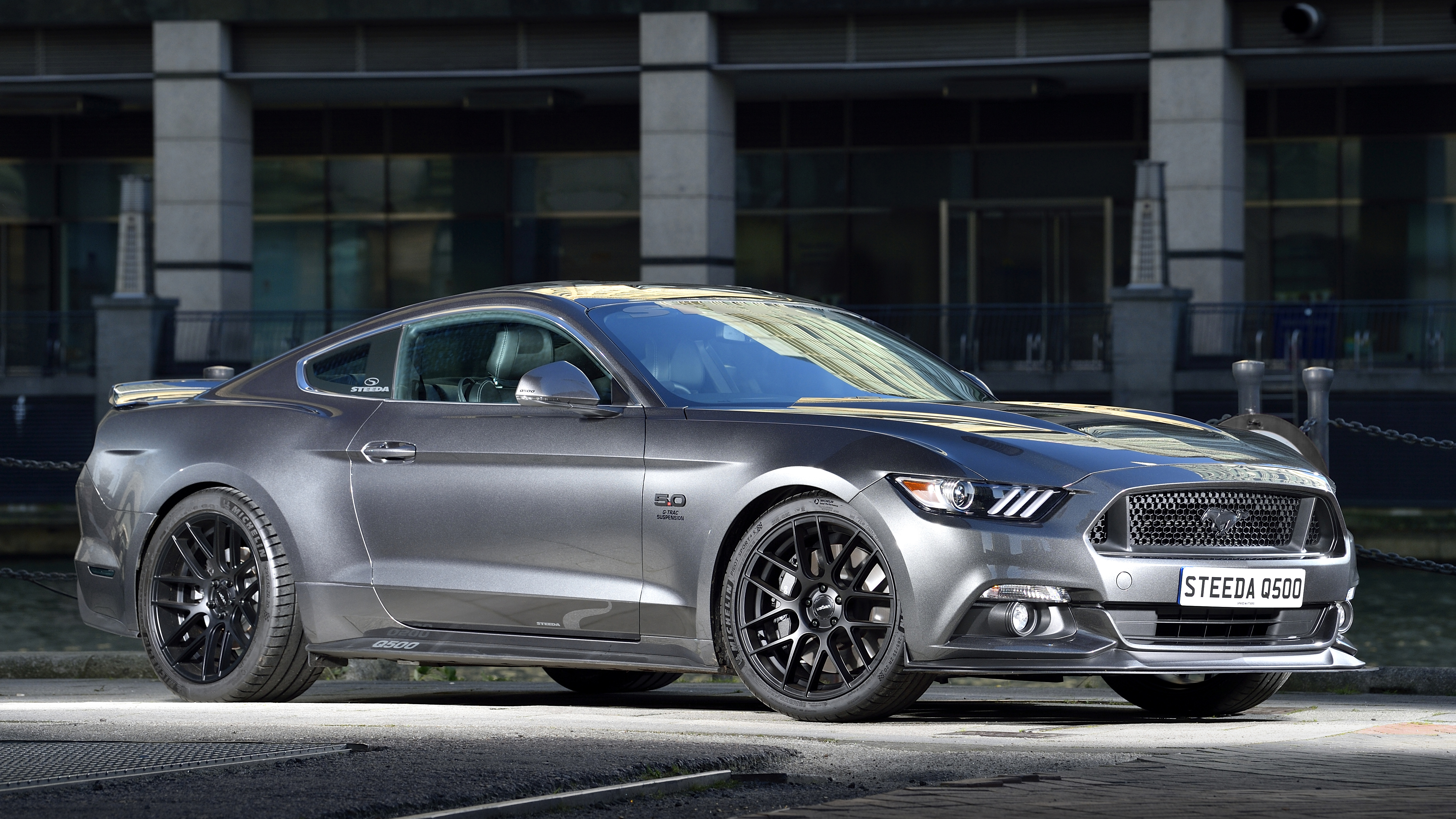 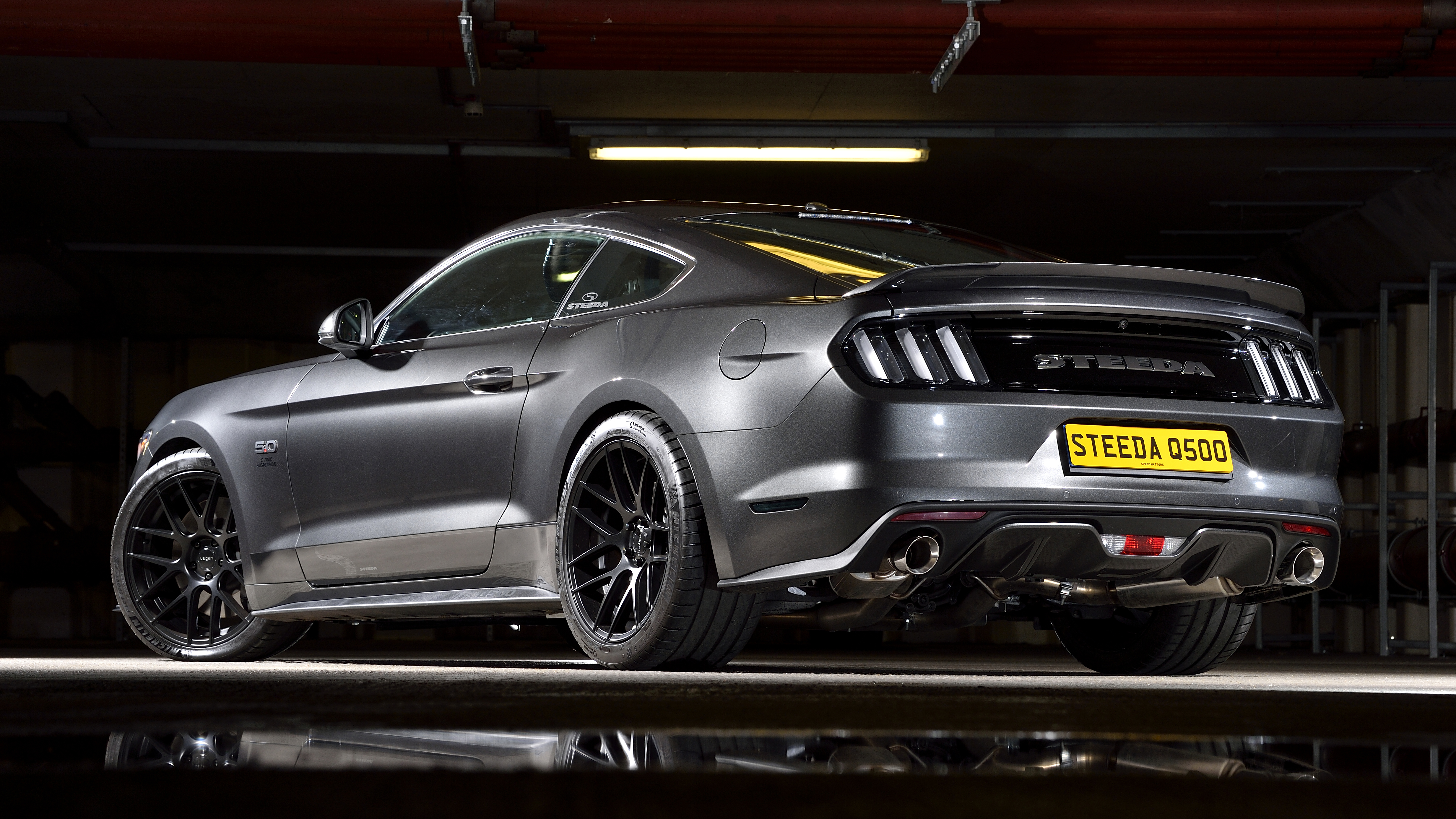 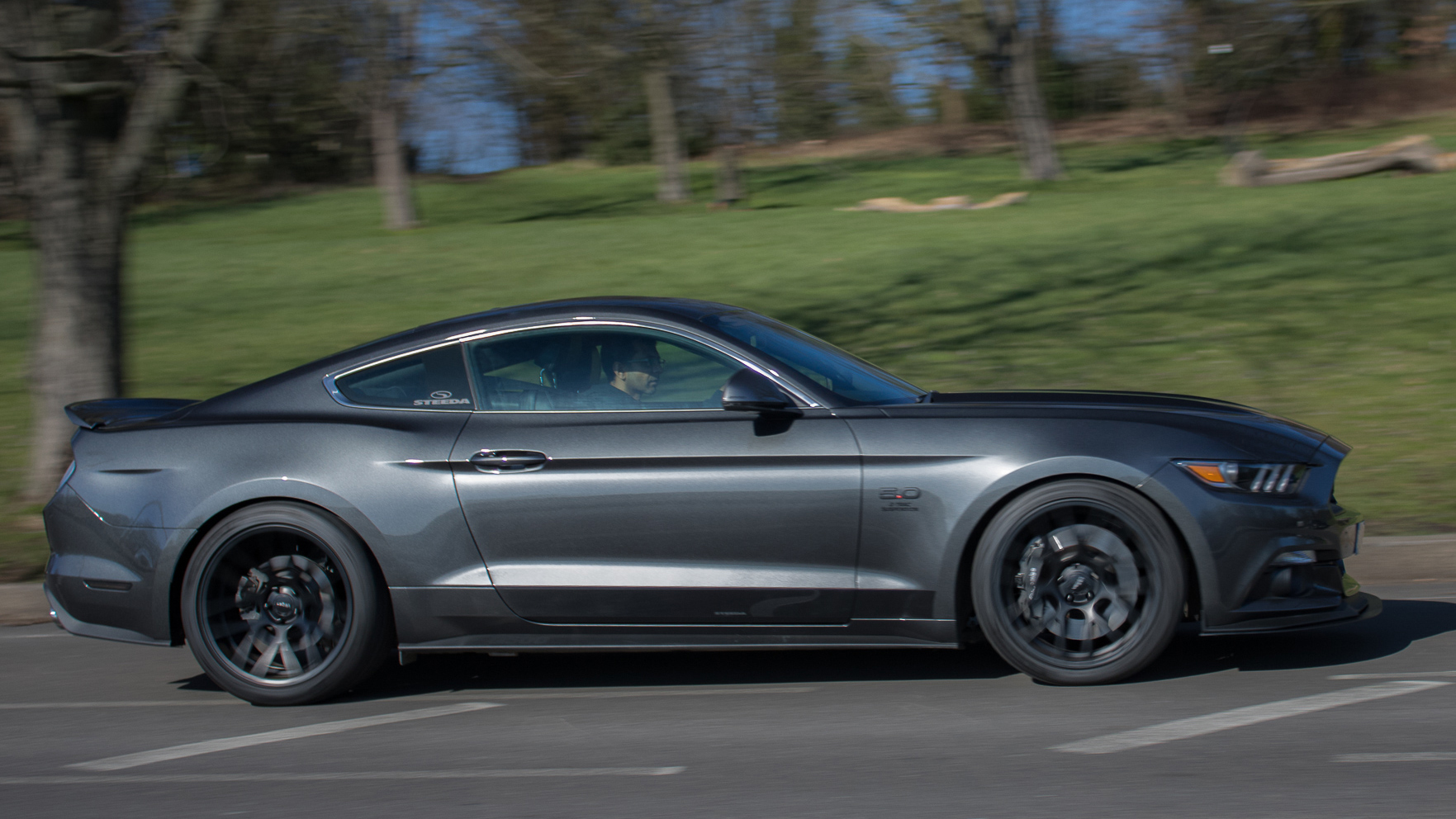 Steeda? Never heard of them

That’s because they’re an American company. Apologies if you are American and cannot believe that no-one over here has heard of Steeda – seeing as they’re among the world’s biggest manufacturers of Ford performance parts, but there you have it.

Expect to hear more of firms such as Steeda, though. The Mustang has been a runaway success in Europe – it was up there as one of the best selling sports cars last year – and that’s sure to tempt established tuning companies to try to expand their markets. Especially since Ford has just overhauled the Mustang, fitting a more sophisticated 10-speed automatic.

But this car is based on the pre-facelift model.

It is. Steeda already has a parts range for the new car, but this is indeed a pre-facelift 5.0 V8 manual, albeit one fitted with a full gamut of performance parts. Steeda has packaged most of them together into one £8,998 upgrade and called the result the Q500 Enforcer.

Nine grand? What do you get for that?

Here goes, starting with the engine, which has gained a new intake system, modified engine management and new exhaust. The suspension has been comprehensively overhauled with new front and rear anti-roll bars, springs, sway bars, subframe bushes and so on. Outside there’s a front splitter and rear spoiler, and inside a scattering of badges.

How much more power?

Sounds more fitting for something called the Enforcer

It does, although while it certainly sounds like 500bhp, I’m not sure it feels it. Blame the fact the standard Mustang weighs 1720kg (this one’s probably no lighter), and in a world dominated by turbos, the Mustang’s old-school 5.0-litre V8 feels short on torque until you have 3,000rpm dialed up. There to around 5,500 rpm is this engine’s sweet spot – it pulls hard, sounds awesome and throttle response is very, very sharp. At the top end it becomes slightly thrashy, so you’re best changing up.

Which is a bit of an effort. The shift itself is lovely: short, tight and precise, the new lever having a much more positive action than standard. But the clutch, well, let’s just hope you’ve spent some time down the gym, because the spring is heavy.

Ah yes. On top of the standard Q500 upgrades, this car has had… more. The 20-inch wheels and tyres are £3,500, coilover suspension with adjustable dampers is £1,600 and a host of other little tweaks, including a shorter gearlever and more robust clutch spring pile on another £3,400.

But there’s no point trying to pick this car apart and say what difference each component makes – that’s impossible. Instead, let’s consider it as a whole.

And as a whole?

I was prepared to be scornful of this car – the Mustang is a muscle car, I thought this one would just be harder and faster. We drove the Clive Sutton Mustang CS700 a couple of years back and didn’t exactly fall in love. This is different though. Steeda clearly knows what it’s doing.

Criticisms first. The ride is slightly jiggly – only slightly mind – with too much spring and not enough damper (but don’t forget this one is on adjustable dampers so that can be changed). Over speed bumps the rear suspension creaked (again, curable). And exhaust resonance at around 1800-2000rpm makes steady state cruising challenging.

But then we come to the good stuff. It feels tight and together on the road. Genuinely. It goes down a B-road with way more control and precision than the standard car. The steering is now more accurate, the front end more faithful. You turn in and it goes where you point it – you have confidence in it.

What about the coming out of corners? How’s traction?

Stand by for another surprise – it’s impressive. It drives itself out of corners with determination and without any loss of traction. It’s on point. No messy oversteer, just predictable grip. In fact it works both ends evenly, and with no spiky turbos suddenly spooling into life you quickly gain confidence in it.

Of course, it’s still a big, wide car, but dynamically it has no real vices, nothing you have to drive around or forgive. For an aftermarket car it feels very well engineered. If I’d driven it blind and someone had told me it was a factory production car, and exhaust resonance aside I reckon I’d have believed them. It’s not as feisty or dramatic as a GT350R, but that’s the sort of vibe it has.

What, a Mustang you could take on a track day?

Not only that, I don’t think you’d be off the pace, either. OK, dealing with this much weight I’m pretty sure the brakes would stop feeling strong and good underfoot after no more than a couple of laps, but turn in is so much improved, and it works both ends so evenly through corners, I think you’d have real fun with it.

It’s satisfying in a very old school way, honest and rugged. Once or twice turning into lumpy corners the car’s momentum was caught out as it bounced on its springs, but at least I was aware of what the car was doing, so could react to it. And personally speaking, if I was upgrading a Mustang, far rather this than blowing the budget on a 750bhp supercharger upgrade. 500bhp is fine, thanks. The only change I’d be interested in trying would be a lighter flywheel, see if that made the engine feel more zingy, especially during blipped downshifts.

Would it make you buy a Mustang?

But no, if you’re looking at this as a potential alternative to a Porsche Cayman, then stop. It’s not that sort of car – it’s bigger, heavier and cruder. Exhaust resonance spoils it slightly on the motorway and around town, well, it’s a manual with a heavy clutch. It’ll cope in both areas, but it’s most at home on a good country road. Can’t remember when we’ve been able to say that about a Ford Mustang before.