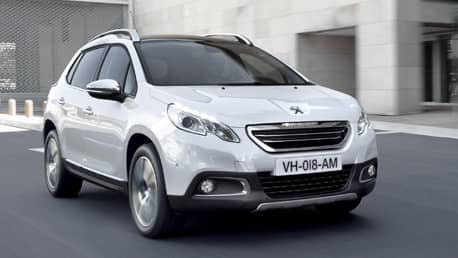 Indeed. This one's a plumped-up version of the Peugeot 208 that'll fight for attention among Vauxhall Mokkas and Ford B Maxes and possibly even Nissan Jukes, although the latter is a touch bigger and more expensive. In the old days we might have been dealing with a small estate car here - something like the old 207 SW, perhaps - but this is a world of crossovers, and so that's how the 208 shall be diversified.

How big is it then?

Inside it feels as roomy as a 208, albeit one with extra headspace for rear passengers. Outside it's not as sizeable as pictures might suggest, standing under five-feet tall at the top of the roof bars. The boot's pretty useful though, and the loadspace is flush to the edge for easy loading. The rear seats fold completely flat, too, giving you more than enough room for a few bags of footballs.

The layout is the same (barring a new aircraft-control-style handbrake), but the materials are refreshed. So instead of your standard piano blacks and silvery trims, you get satin-finish paints and tactile finishes. The car we drove had coppery air-vent surrounds, a dash trimmed in fabric that felt like hessian matting, and seats covered in something resembling golden fishnets.

Time to call the taste police?

It sounds like a mishmash, but it works quite well. It's as if the designers spent hours in furniture stores, feeling up lampshades and sofas, wondering where similar effects might work in a car. On several occasions we found ourselves stroking the dashboard or running a finger around the vents. If only the exterior design was so appealing...

But it looks ok in the pictures.

In real life it's just a bit... forgettable. The surfacing feels a bit flat, and it relies on busy tricks and fillers to disguise unflattering shapes. See the kink in the roof? Its visual heft is dissected by chrome inserts above the rear doors. And on first impressions, you might think the roofline follows the swooping contours of the roof bars. Instead it rears up above the B-pillar, like it does on a Skoda Roomster, which is ugly. We'd confidently wager that this won't be a design classic.

Hmm. So is it any good to drive?

The way it gets down the road is the biggest surprise here. This VTI weighs just 1080kg, and it's not that tall, so there's not much slop or roll. The 1.6-litre petrol - a less powerful version of that in the 208 GTI - feels energetic and smooth. The ride, on both 16s and 17s, is well-behaved. The steering has more weight and feel than a regular 208's. The 1.6-litre diesel, however, weighs a full 100kg more, most of which is over the front wheels, so it doesn't feel as agile.

Can I take it off-road?

If you must. The 2008 is front-wheel-drive only, although pricier versions come with Peugeot's ‘Grip Control' system that uses electronics to divvy up the power across the front axle. Like a Range Rover, you can tell it what sort of surface you're on. Unlike a Range Rover, it will not fully defeat the landscape. Essentially it's just an elaborate - although reasonably effective - traction control system... and a slightly unnecessary conceit to its SUV aspirations.