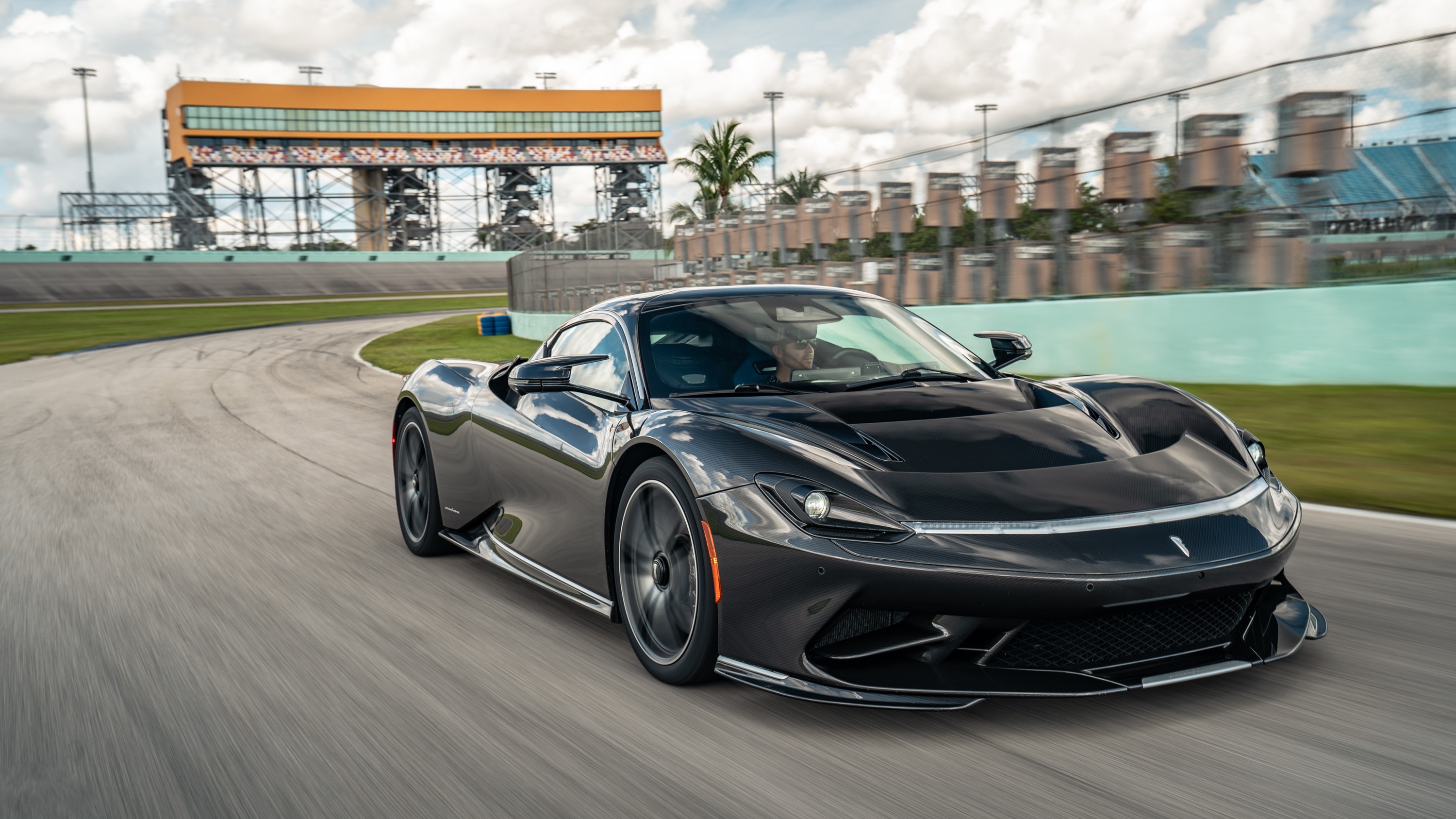 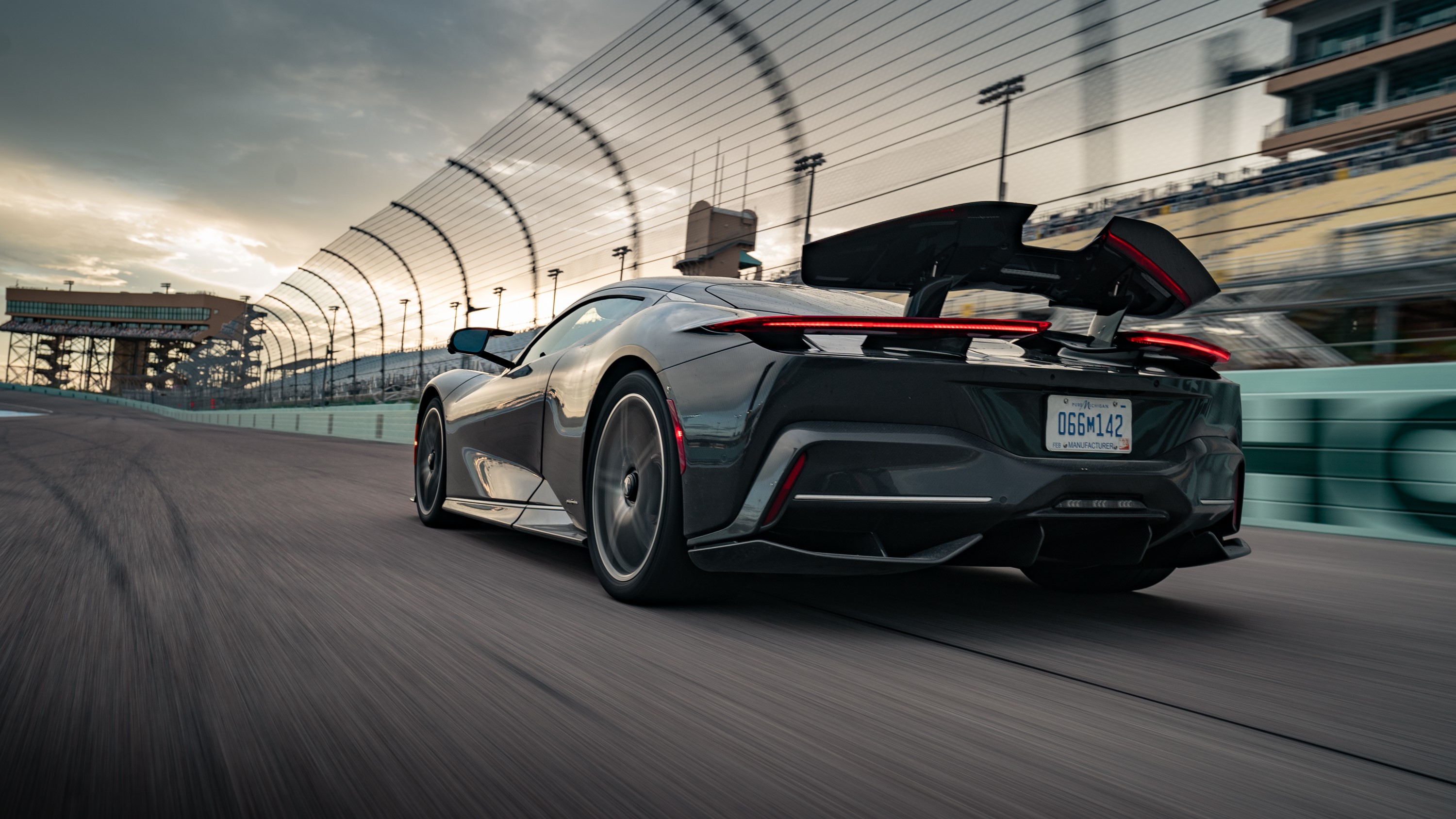 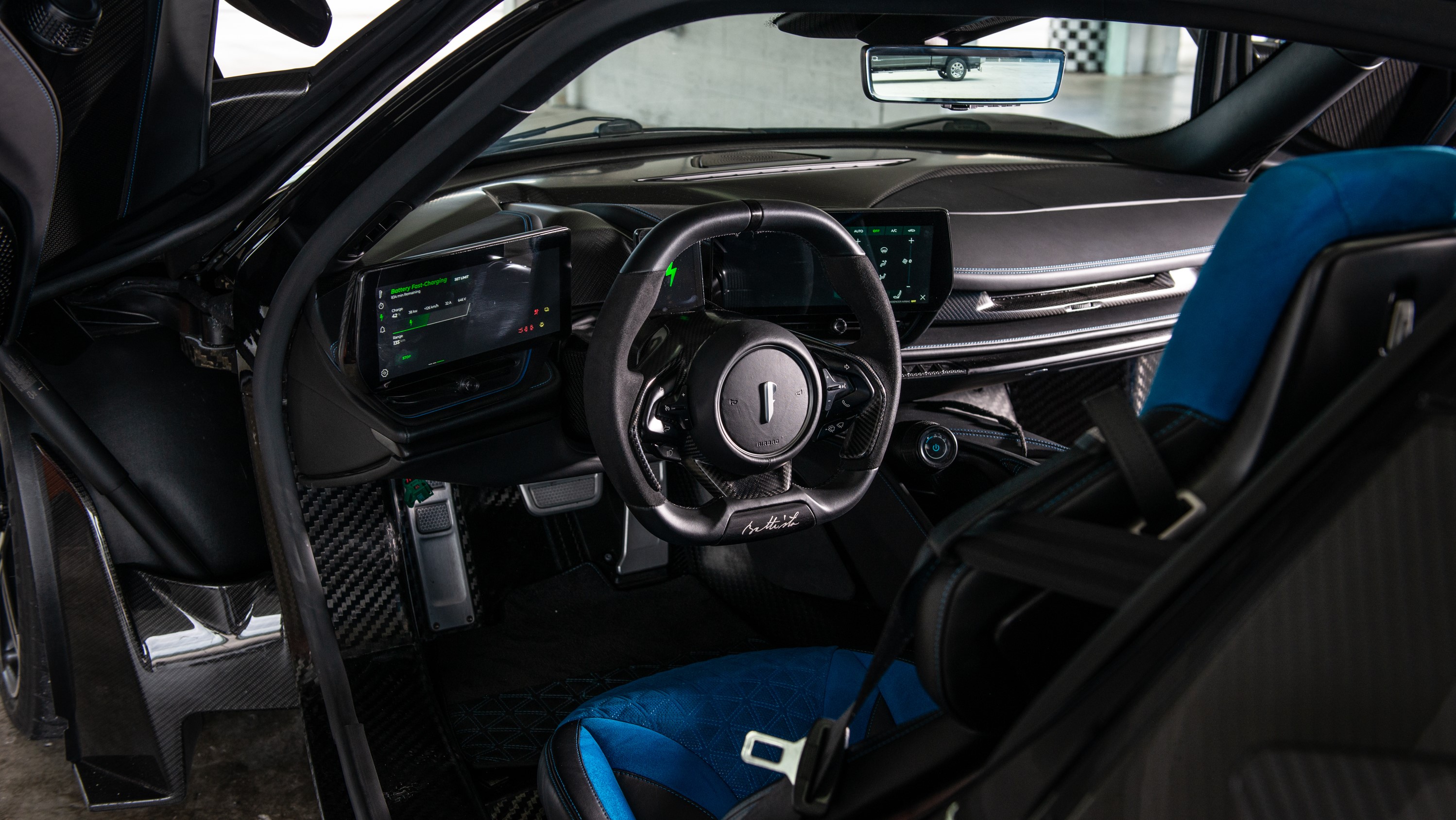 Let’s start with the low-speed manners and work our way up. We got our hands on the Battista in Miami, notorious for its stop-start traffic and absence of any decent driving roads, but no matter because it is a ridiculously easy car to drive at posing speeds. If I was in a Porsche Carrera GT or McLaren F1, there would be finely honed mechanical bits and hair-trigger clutches to nurse around, but not here. The ride, while not exactly plush, is comfortable enough to use every day. The dual single-speed gearboxes (one for each axle), the gentle throttle mapping in the lower driving modes, the regen braking (strong enough to one-pedal it around town)… it’s like driving a very low, very wide Tesla. Quiet too, apart from the artificially generated soundtrack.

It’s electric but the Battista still makes sound, pumping it out through two external speakers and through the internal 12-speaker sound system. And get this – the sound increases in increments of 54hz, because that’s a multiple of 432hz, which is considered the purest frequency in the universe. Utter marketing mumbo-jumbo or actual value to the customer? You decide…

What I can report is it sounds… interesting, like the car’s breathing or throbbing. It’s particularly pronounced when you switch it on in the garage and the bassy pulse bounces off the walls. It’s not copying a combustion engine, but it could be mistaken for one. As you dial up through the modes and build speed, the volume and pitch increases. Let’s file it under a nice conversation starter in the Polo Club, but I’d switch off after a day or two.

A surprisingly pleasant way to travel at sane speeds then, but a battle of willpower not to gun it at every opportunity. Because the performance is ever present, it looms like the devil on your shoulder. So we head to Homestead Miami, point it down the straight and dump the throttle. At which point I let out an involuntary squeak as the air’s crushed from my lungs and we jag forward in a way I’ve never experienced. The straight-line acceleration makes a Taycan feel like a G-Wiz. And then I look down and realise I’m in Energica mode, rather than the full-English Furiosa setting, and only using 1,341bhp and 1,393 lb ft of torque – just 71 per cent of the car’s potential. And my brain blows a fuse.

Quick word on those driving modes then – adjusted by a rotating dial built into the door, so down by your left thigh. You have Caraterre (your opportunity to personalise all the settings on the car), Calma (the mildest with a mere 402bhp and 870 lb ft), Pura (999bhp, 1,044 lb ft of torque), Energica and finally Furiosa (the full 1,874bhp and 1,741 lb ft of torque, along with full torque vectoring deployed). That rear wing, which acts as an airbrake and deploys automatically at high speed can generate up to 500kg of downforce, “more than the weight of a fully grown polar bear” according to Pininfarina’s press release. I’d like to see how they verified that.

Just as I’m about to crank it up to Furiosa, the heavens open and we retreat to the pits. I mention this because when we eventually head back out the track is still damp, and that’s significant when you have 1,847bhp and Michelin Pilot Sport Cup 2Rs. Now if I use full throttle anywhere it’s spinning up its rear tyres in the corners (thanks to a standard-state 30/70 front/rear torque split, before torque vectoring or traction control intervenes) and you can feel the mass pushing the nose wide, then the power flipping that instantly into oversteer when you get back on the throttle. Yes, this may be one of the most technologically advanced cars ever built, with a suite of electronic assistance that boggles the mind, but 1,874bhp is still 1,874bhp and there’s an intimidation factor when your four contact patches have a moist surface to claw at and circa two-tonnes to try and control.

But as the track dries through the afternoon, the Battista’s genius slowly reveals itself. As grip levels increase, you can explore more of the throttle travel, more of the time. It starts to grip hard in the corners and catapults you out rather than lobbing you sideways. You feel the torque vectoring rolling up its sleeves and the mass seems to fall away until I find myself launching it down the straight, leaning on the brakes hard (which are monstrous given the task at hand) and scything through the corners. It’s a wild ride, and a physically demanding one despite Ferrari-esque light but whipcrack quick steering, and the absence of a clutch.

Frankly, it’s outrageous that a car weighing two-tonnes, that is not in any way marketed on its track abilities, that is supposed to be slightly more laid back than the Rimac Nevera can do this. It absolutely lunches the infield circuit and leaves me breathless and wanting more. I don’t suspect many Battista owners will be queuing up to attend a track day, but I encourage them to do so and experience the limits. They’re in for a shock. 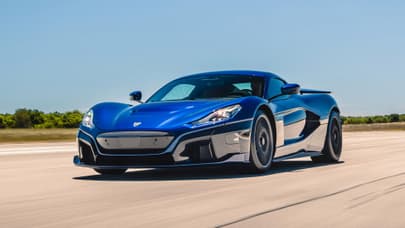 £ N/A
The first true pure-electric hypercar is a sensation, as is the company that makes it 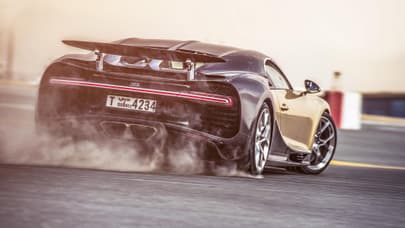 £ N/A
Veyron's successor is a car that does things no other car can; one with a distinct personality
compare car finance
Powered by
more on this car
Take one for a spin or order a brochure
order a brochurebook a test drive
Powered by