£120,065 when new
Read why you can trust our independent reviews 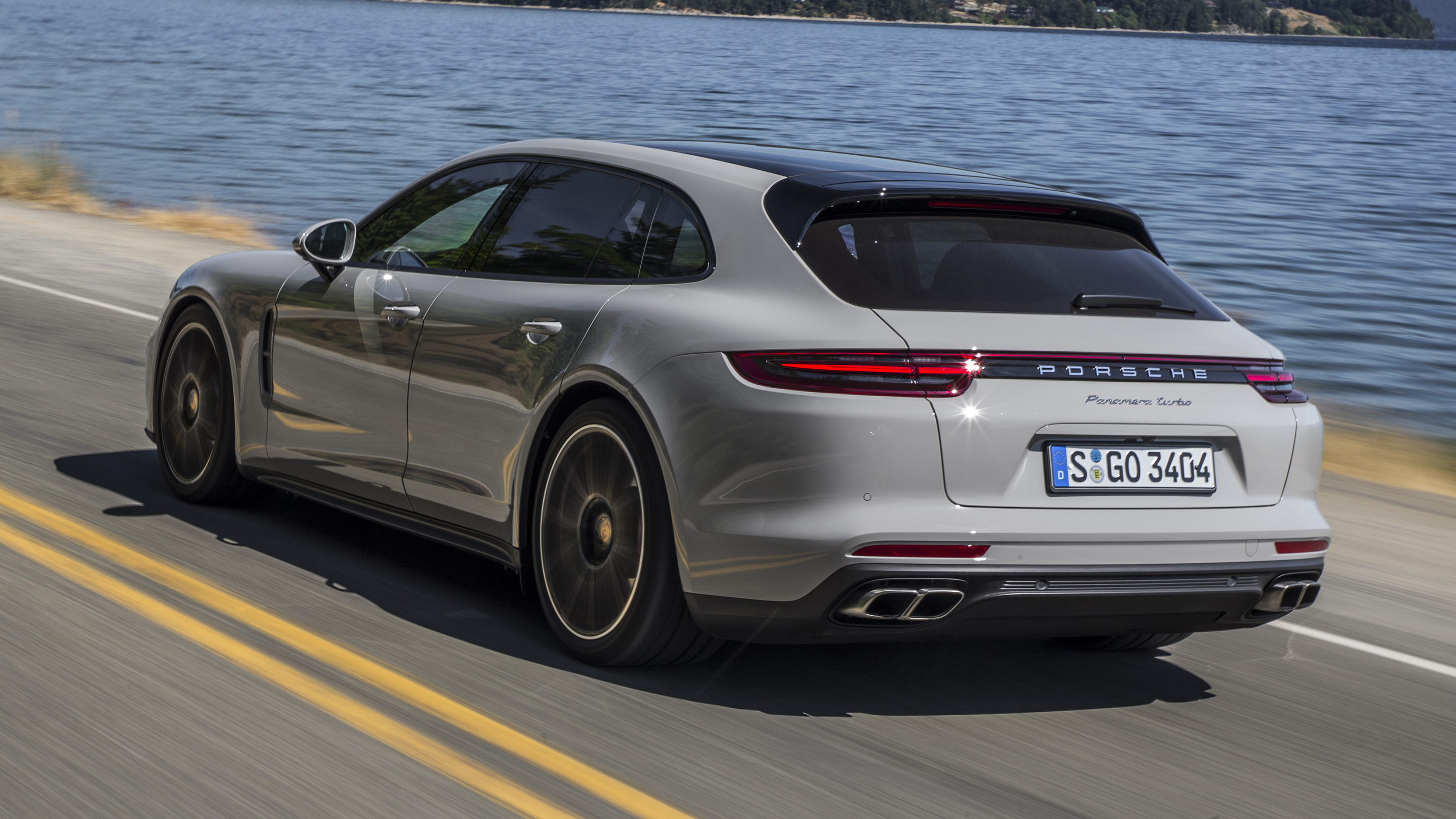 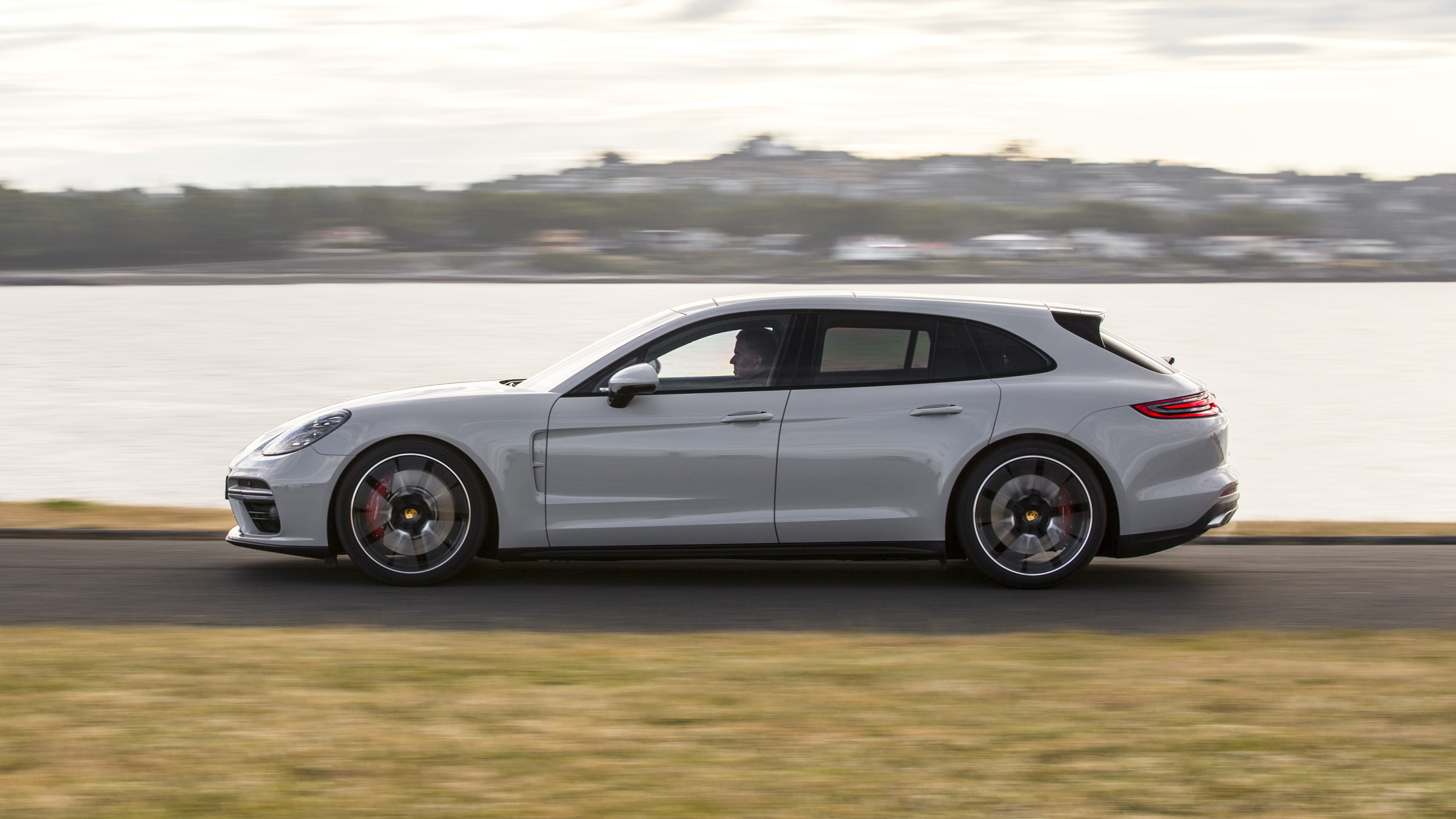 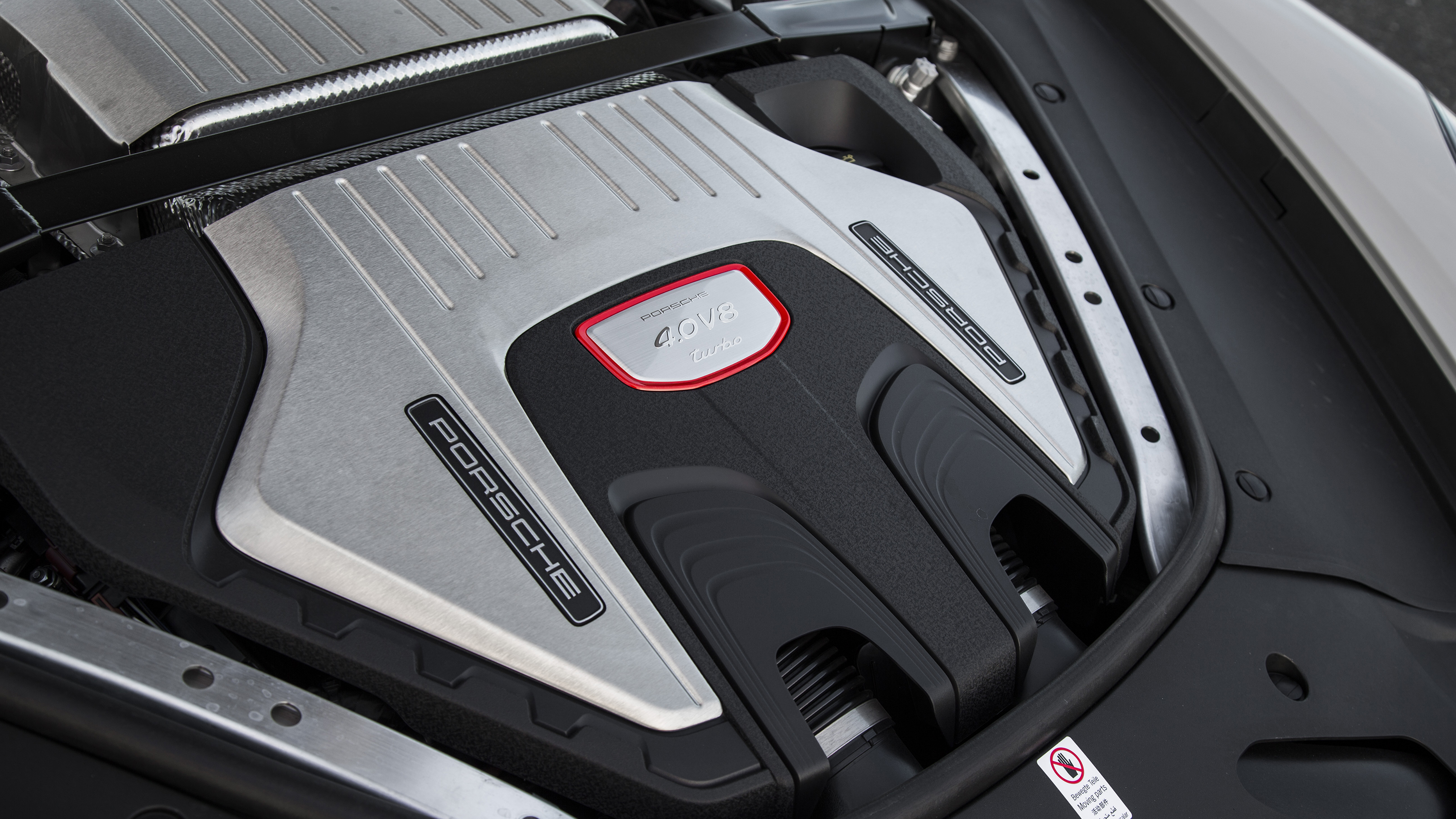 Which new Porsche is this?

It’s the Porsche Panamera Sport Turismo. In basic terms, it’s Porsche’s first production estate car. But it’s far more nuanced than that. You’ll note it doesn’t look hugely estate-like: the wheelbase and length are identical to the standard Panamera. Which also has a hatchback at the rear just like this car.

The Sport Turismo has a smidge more luggage room, though, and a fifth seat in the rear, which is new to the Panamera. There’s a mite more headroom in the back and the boot lip is much lower, so there is at least some tangible extra practicality. But it’s not suddenly become a Volvo V90 rival.

Does it cost more?

The Sport Turismo range starts at £73,000, and you’ve a choice of petrol, diesel or plug-in hybrid powertrains. All have four-wheel drive and an eight-speed automatic gearbox as standard. This Turbo is the most potent of the lot (for now, anyway), with its 4.0-litre twin-turbo V8 producing 542bhp, enough to shift its 2,035kg from 0-62mph in 3.6 seconds, or 0-100mph in 8.2secs.

Its top speed is 189mph, with a little active spoiler on the roof to help with the aero above 106mph. It provides up to 50kg of downforce on the rear axle, though you can presumably achieve the same result by placing five Beagles in the boot.

It’s as majestically refined and comfortable to drive as the standard Panamera Turbo, with no discernible difference. Quite how Porsche has made such forceful acceleration feel so relaxing I don’t know, but it would be many hours and hundreds upon hundreds of miles before you’d feel the least bit fatigued driving this.

Some fairly strong massaging seats and lots of active safety gubbins – which can pair lane-keep assist and active cruise control, to effectively have the Panamera drive itself – all help.

But what if I want to drive it myself?

You’ll have a great time. I’ll concede ‘refined’ and ‘comfortable’ aren’t words you find normally high up in a Porsche review, and they do set the tone for one of the less fun and frantic cars Stuttgart produces. But that doesn’t mean it isn’t fun. Just a different kind of fun.

In tight and challenging corners it does feel its size and weight – this is a jolly wide car – but it still turns with great agility and the steering response is great. You know you’re moving something large around, yet the car responds faithfully to whatever you ask of it. Even the braking power remains strong, corner after corner. The Panamera doesn’t beat the rules of physics, but it’s a strong match for them. 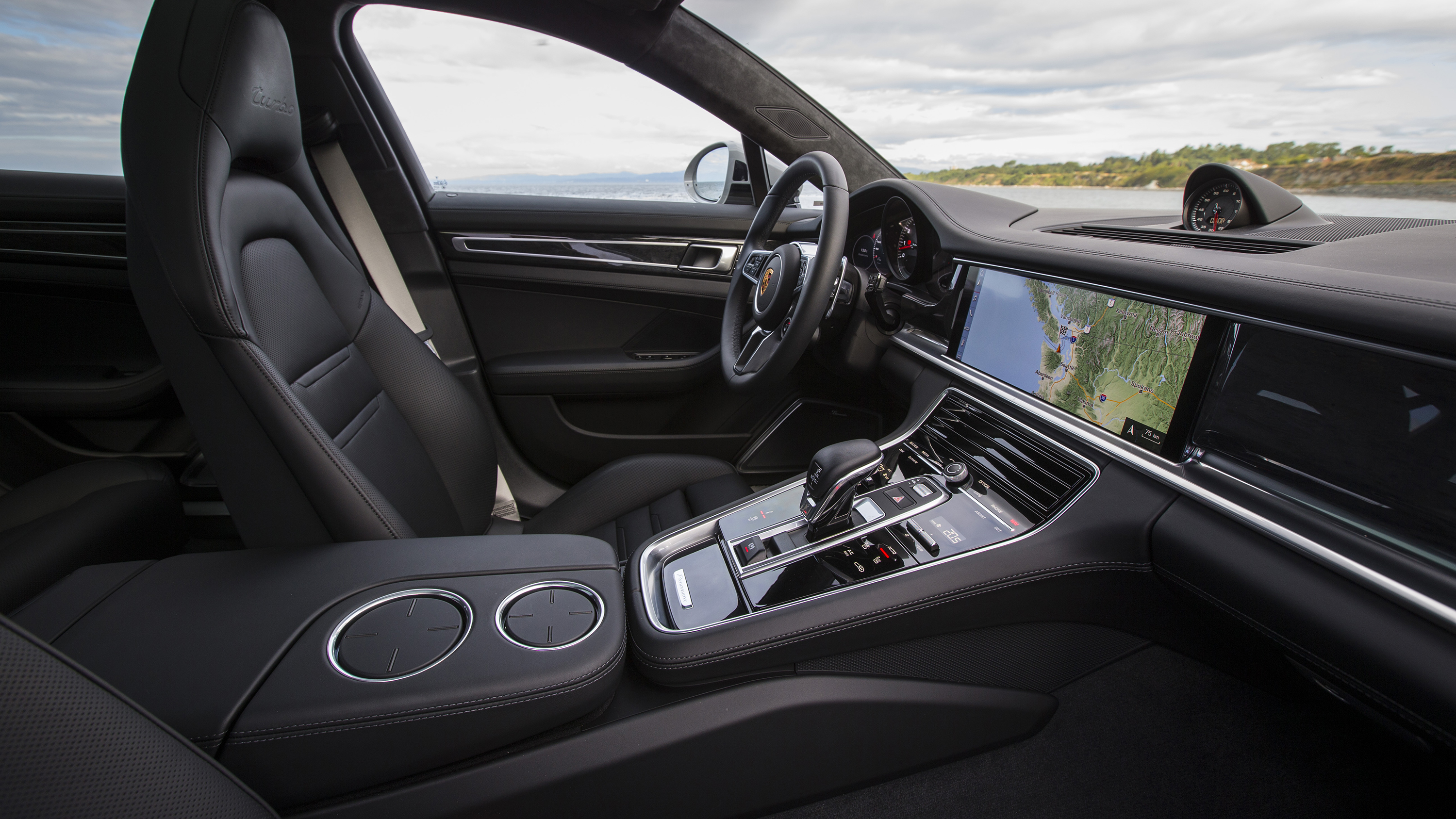 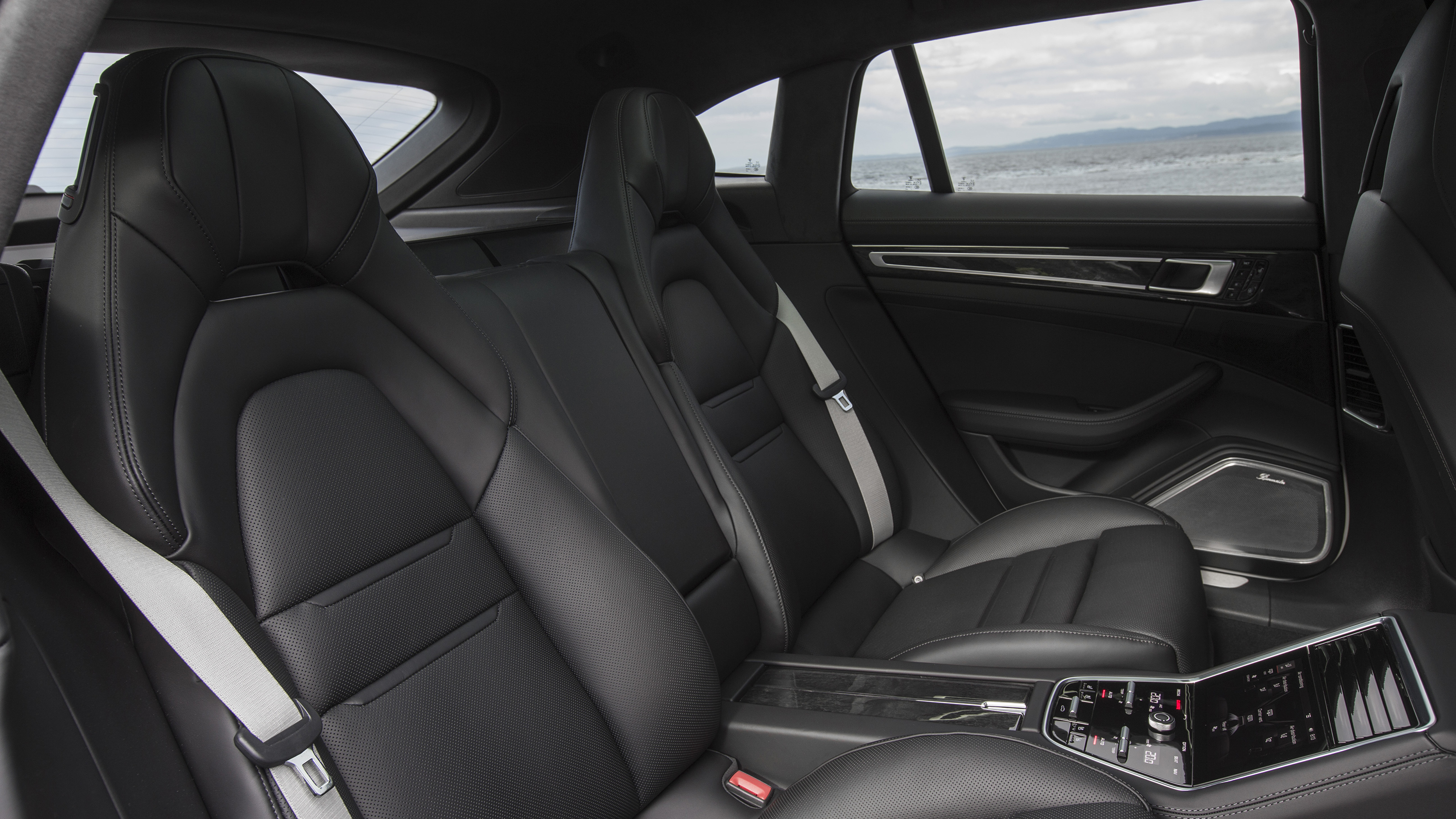 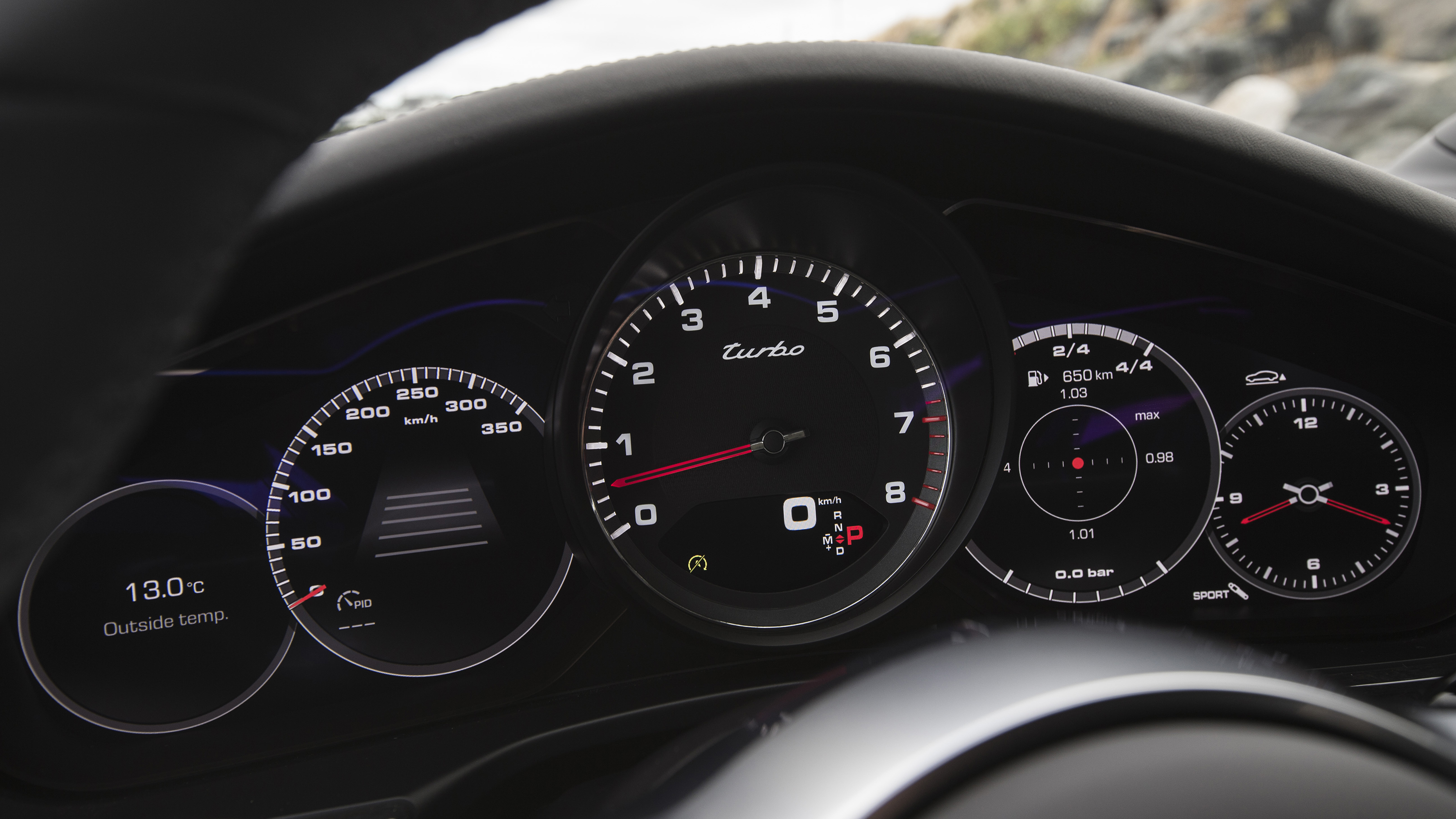 And the engine is superb, offering you however much of its performance you want. Flatten the throttle and those five Beagles will all end up in a messy tangle. The way the number swells on the electronic speedo (embedded within an analogue rev counter, happily) seems at odds with how linear, relentless and downright refined the whole acceleration process is.

With calmer, more socially acceptable throttle inputs you get that wonderful feeling of an overly potent engine just making really easy work of everything. The eight-speed PDK transmission is super smooth when left to make up its own mind, but nice and snappy when you take control yourself, especially if you’ve switched the powertrain into ‘Sport Plus’ mode.

Ride quality is largely very good, though with Sport Plus engaged it’s a very firm thing, as the ride height drops right down on the Turbo’s air suspension. Good when you’re in the car on your own, but maybe ill-advised when it’s full of people and their things. But leave everything in its standard setup and it’s a perfectly able family car.

How is space in the back?

Porsche itself describes the Sport Turismo as a ‘4+1’, acknowledging that five adults in the back won’t be something that happens often. Pay £1,545 and you can have the car with the Panamera’s regular four-seat setup.

Weird logic? It ends up very roomy. And those rear seats are heated, ventilated and recline every which way, and also yield extra headroom by virtue of being mounted lower. Don’t be shy with the options list and you can end up with a car whose luxury matches a Bentley’s.

Expensive options then, I presume…

The latter is a gimmick but a marvellous one, and proved incredibly good at spotting rogue deer in the bushes – and chiming an alert before they ran out onto the road – while I was out on an early morning run. I’d spotted the deer anyway, but if it saved you from an unpleasant car-animal interface while you’re a bit bleary-eyed in the morning it would justify every penny of its cost.

It might be fair to sum up the Sport Turismo as a marvellous gimmick, too. I could argue it’s not different enough to its base car to justify being a separate model, and I think you’d need to have genuine qualms with the headroom and boot lip of the normal Panamera – or really need a fifth seat – to buy this one on purely practical grounds.

But it looks a little different, too, and is arguably the most cohesively styled Panamera yet. If Porsche wanted to make a proper estate I’m sure it would. Instead it’s made a highly desirable object that’s as good to drive as its base car and just supreme over long distances. I’d have it over a performance SUV any day.