£100,540 when new
Read why you can trust our independent reviews 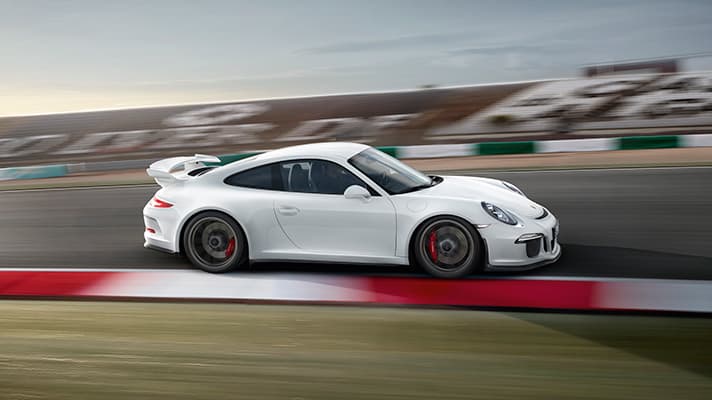 There's lots to tell. It features an entirely new naturally aspirated 3.8-litre flat six that develops 469bhp and revs to nine thousand. The suspension is 30mm lower than the standard 911 Carrera and the monocoque is a whacking 25 per cent stiffer than the old one. It's a big step forward in every area. But also a controversial one.

You're referring to the fact it's 35kg heavier than the old one?

That's neither here nor there really, but is nevertheless surprising. No, the controversies surround the gearbox and the steering. This GT3 features electric power steering and a PDK double clutch gearbox. No manual gearbox available at all. The steering is also corrupted by a four wheel steer system that can turn each rear wheel by up to 1.5 degrees, which claims to make the GT3 feel more nimble into corners.

It all works. And yes, that includes the gearbox. Let's deal with that first as it alone fundamentally changes the GT3's character. It does this in two ways and the purist in you will not like them. By allowing your left arm and leg to be redundant and waft along in auto you're naturally less involved in the physical process of driving the GT3 - it doesn't demand anything of you. However, there's no denying that this change also significantly broadens the GT3's repertoire and opens it out to a much wider audience. An audience that will probably also not mind the fact that refinement is acceptable and the cabin can be optioned to be perfectly comfy and well stocked with kit. In many ways it's as habitable as any other 911. Albeit without the benefit of rear seats.

So did PDK put you off?

Initially yes, but only for 20 miles or so. There's no escaping the fact that you're no longer in charge of making the cogs mesh, and I did miss, and do continue to miss, the mechanical interaction. But PDK has its pluses. These chiefly concern the way it interacts with the new engine. They feel utterly harmonious, two seamless components that perfectly complement each other. And what's so special is what happens when you pull a paddle at the red line, experience an utterly instantaneous drop of revs and an equally immediate take up of the next gear, right in the thick of the power band. It's a small act, but it never failed to make me grin. Double clutchers have left me a bit cold up until now, but at full chat this one is a bit special. Good, firm paddle action too.

You said it complements the car?

It does, it modernises the GT3 concept, brings it up to date and, as I said above, meshes brilliantly with the new engine. The new, and completely stunning, engine. It's a masterpiece, nothing less. The bare facts are 469bhp at 8,250rpm and 325lb ft at 6,250rpm, while it also weighs 25kg less and features titanium conrods, forged pistons and dry sump lubrication. I think it might just be the best road car engine Porsche has ever done, a significant step forward from the old Mezger unit. It's massively charismatic, sounds divine, is sharper to react and sears through the rev range. It's a delight to use, still chuntery and uneven at low revs, but with a healthier mid-range and a top end of such demented savagery that it's enough to put the GT3 in a supercar class alongside the Ferrari 458 and McLaren 12C. And now, when you change gear, there's no pause, no delay, just more aural intoxication, more speed, more addictiveness.

Moving on, how's the steering?

You'd never guess it was solely electrically assisted. Somehow Porsche has managed to make an electrical system that communicates more than just weight and accuracy. Damper behaviour is crucial to this, but in the standard 911 there's a gulf between what the steering gives you (not much) and what the suspension gives you (quite a lot) and as a result the steering feels a bit numb. Not here. Here it's every bit as incisive as the suspension (which is still adjustable for height, plus toe and camber angles) and once loaded up in a corner you know precisely where you are with it, what grip you have to play with, what adjustments will make what difference, the works. There's only one caveat and I think it might have something to do with the otherwise unobtrusive four-wheel-steer system. During tiny steering inputs - the kind you make on a bumpy road - or for the first fraction of turn-in, there's a momentary delay, as if there's a bit of slack. It's gone almost before you notice it, and could well just be the time taken for the steering pump to build up resistance to your input. Whatever, it's only worth mentioning because the rest of the car is so good.

What about on a track?

Can't tell you yet, I'm afraid. Although Porsche believes 80 per cent of buyers take their GT3s on track, we haven't had the opportunity to yet. Porsche also claims it's capable of a sub 7m 30s Nürburgring lap time. I don't doubt that for a second. All I can tell you with any authority is that it's a genuinely awesome road car, full of feel and demanding of commitment to drive fast. Centred around the gearbox, I think the focus has shifted slightly, moving marginally away from driver interaction towards pure speed. Is this a move in the right direction? Possibly not, but you know what? It just doesn't matter. You have to take this GT3 at face value. It is what it is, and what it is, is utterly superb.

So yes, I'd love to drive it with a manual car to do a back-to-back comparo, but, when all's said and done, I didn't miss the manual nearly as much as I expected to. And I loved the rest of the experience. It's more inclusive, a little less extreme despite the fact the suspension is as tough and locked down as you could wish for. The ride is firm yet beautifully damped, cabin noise has been lessened, but engine noise is as strident as you'd hope. A fraction less guttural maybe, but the way it yowls from 7,000rpm to the cutout is nothing short of divine.

There aren't many. Before driving the GT3 I would have guessed the Lotus Exige for half the price, or the Noble M600 for twice the price, but the GT3 is now more sophisticated than either. In fact it feels a more direct rival for the Ferrari 458 and McLaren 12C than I'd imagined. It's well over £50,000 cheaper than either, but delivers the same sort of rich, tactile, everyday useable experience. The problem for Porsche is that this wider repertoire starts to bring the GT3 into Turbo territory. I can see Turbo sales suffering a bit as a result. It costs £100,540 and I think that's a complete bargain.