£127,820 when new
Read why you can trust our independent reviews 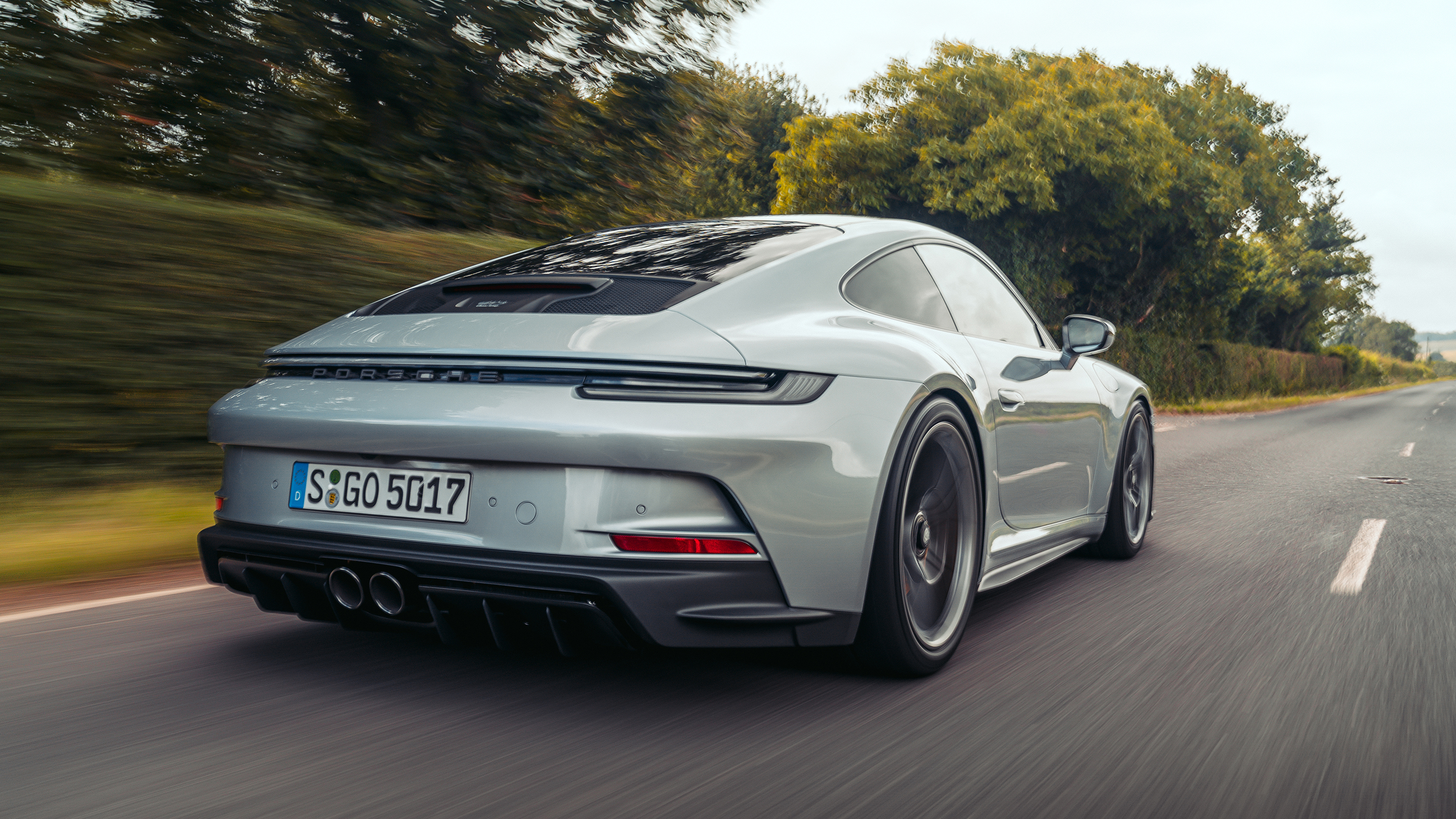 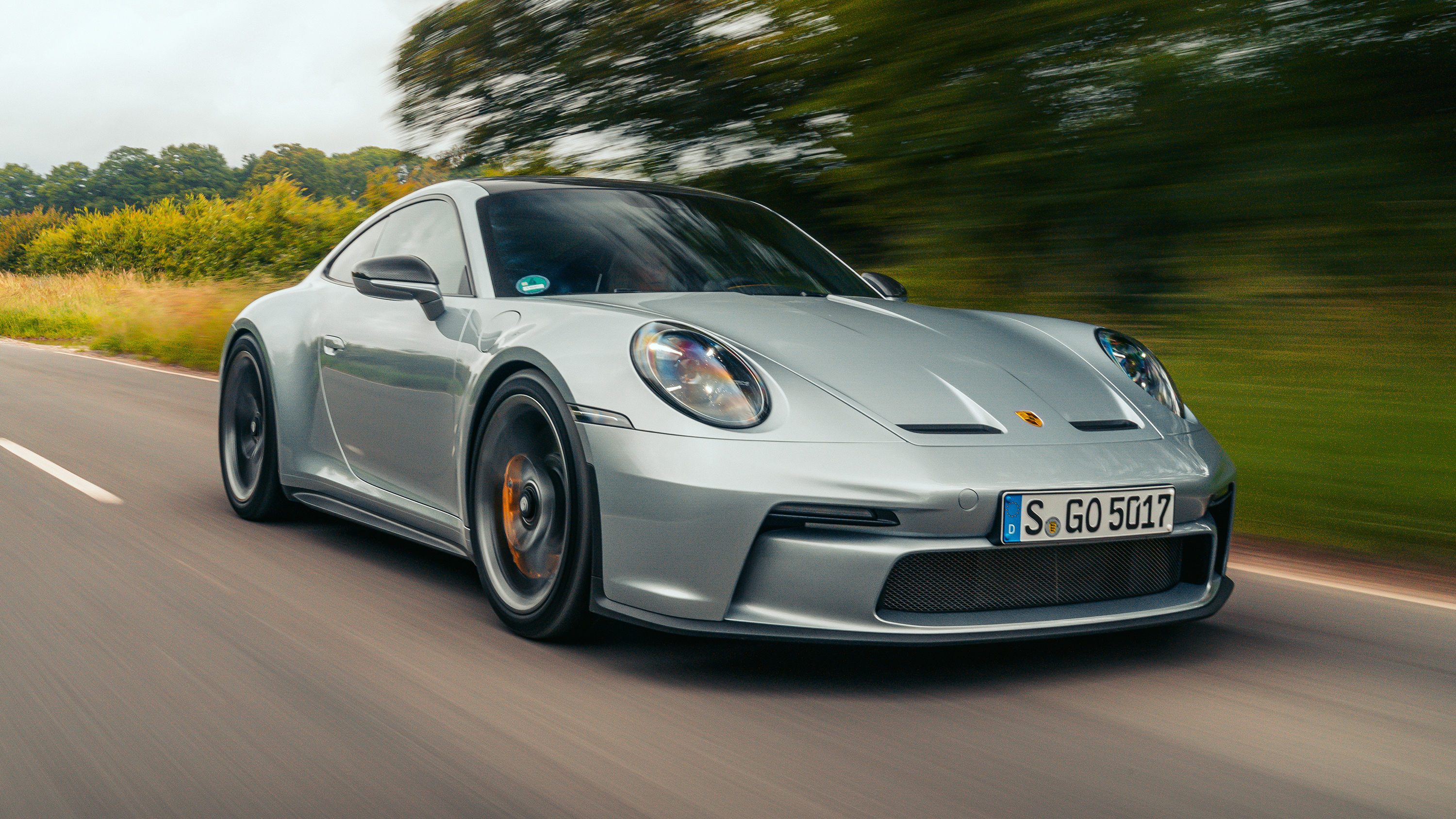 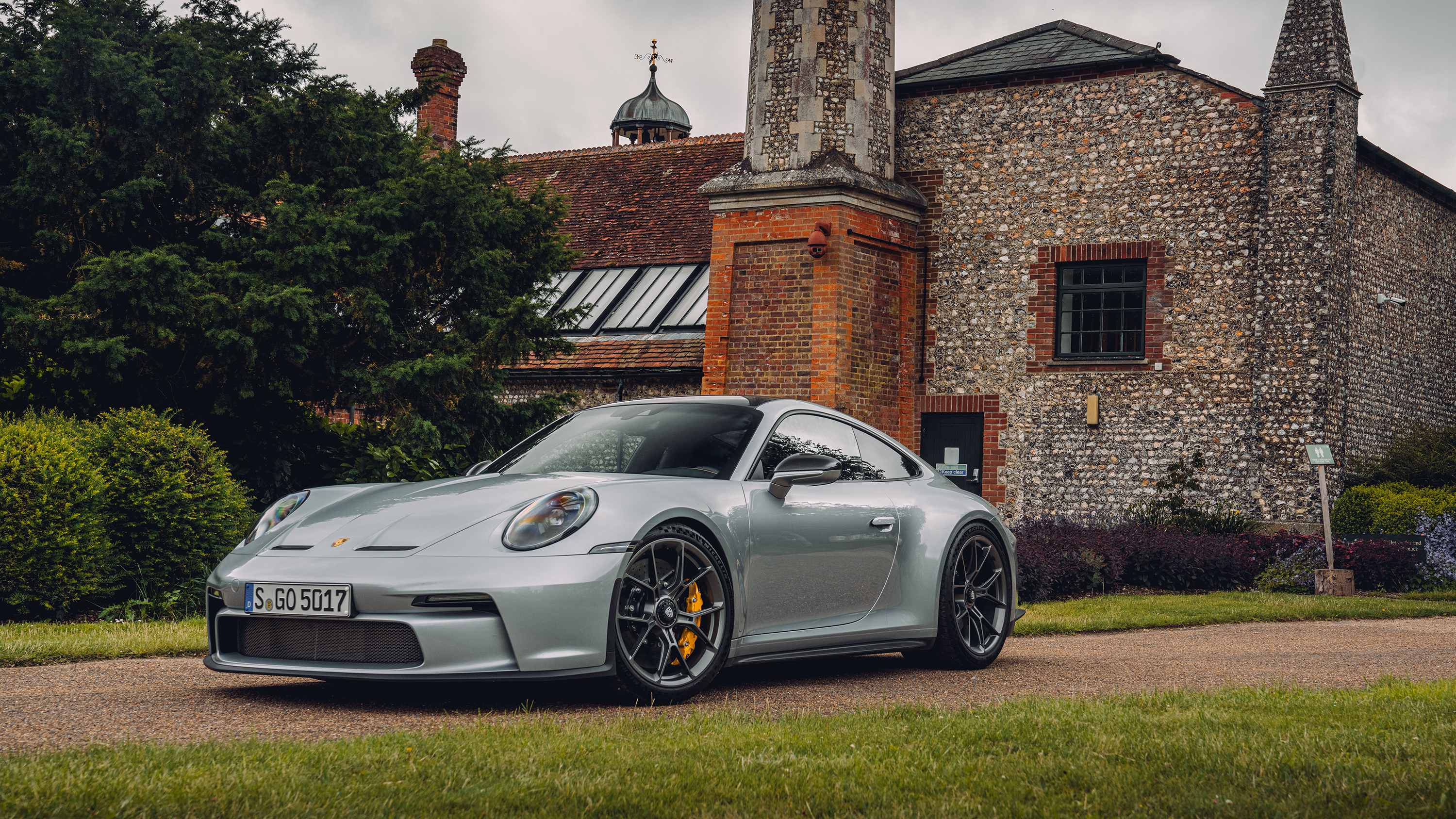 Let me interrupt you there. Have the manual. There are plenty of other choices to make when buying a GT3 Touring, but that’s the only one that really matters. It puts you more in touch with this engine, makes you think more, be more involved, use different parts of this engine’s strident, far reaching range. Cracking shift, too. And besides, the paddles in the PDK aren’t quite as nice as I hoped. The pull is a bit soft.

Fair enough, and I guess I save a chunk of money?

Not a single penny. The manual is a no-cost option here just as it is on the regular GT3. Both cars weigh an identical 1,418kg, with the PDK penalty (too soon…?) only 17kg. All GT3s, regardless of gearbox or rear wing status, cost £127,820. Other options do add money. You can have the PCCB composite brakes on the Touring (£6,498), full carbon bucket seats (£3,788)… you can make it as hardcore as the one with the wing.

Even fit the stiffer suspension?

There is no stiffer suspension. It’s a commonly held misconception that the Touring is a backed off GT3, fitted with softer springs, dampers and a more forgiving set-up. It’s not. This is a cosmetic package.

Obviously, you can shift all this around on the configurator, get your Touring as tight and tied down as you desire, or alternatively load it up with Matrix LED lights (£2,054), rear camera (£876) and BOSE surround sound (£1,002) so the characteristics fit the name a bit better.

The Touring badge has been around for a while now hasn’t it?

You only think that because it’s slotted into the range so neatly. The 991 GT3 Touring arrived as recently as 2017, a response to the 911 R which came along a year earlier and caused such a stir.

How much more power does it have?

Power’s not really want this engine is about. It’s about purity, noise and response. And those things matter more now than ever, because they’re so rare. I can tell you the 4.0-litre flat-six has an extra 10bhp in the 992 (over 991), for a total of 503bhp, but that’s not remarkable. It revs clean through to 9,000rpm (with peak power at 8,400rpm) which is.

Its 346lb ft of torque at 6,100rpm is a modest amount, arriving very late by turbo standards, but getting in the car, having the rev counter in pride of place and seeing that the 12 o’clock point is 5,000rpm and working out that’s only the halfway round the markings… well, if you still think petrol has a place, these things matter.

Don’t you mind that the manual is half a second slower to 62mph?

Not for an instant. Twin-clutch launch control starts are great for showing off and require no skill whatsoever, but whether you hit 62mph in 3.4secs or 3.9 makes no odds to me. Nor for that matter does the fact that the Touring, not having to pull a plank through the air, is a fraction quicker at the top end (199mph plays 198).

The numbers don’t matter. And that’s an important point to make. Because if they do matter, go and buy electric. You’re looking at the Touring for the wrong reason. This is a car for feels.

Bloody awesome. For starters it’s unusual to have a car that feels special without drawing too much attention to itself. You drive it, and don’t feel like everyone is looking, and yet the sensations you’re getting from it are right up there.

The engine chunters and rattles slightly at idle, the clutch has a springy action, you need some throttle to pull away – there’s no anti-stall. It’s a car, as cars used to be, but that in itself is unusual these days. So let’s focus on the manual for a bit. I know we all talk about the third to fourth shift being the most important, but the two below that matter at least as much and tell you more about this particular car.

You’re going to be using the cross-gate third to second shift. You just are. Third is long and torque is low, so for slow corners second is required. Porsche is obviously fully aware of this. That shift, both ways, is the slickest of any manual I can think of right now. The rev blip helps of course, but the lever action is just beautiful. You can feel the expense of that movement. Better still, it’s there between first and second as well.

I don’t know about you, but for me a manual is only rolling properly once it’s in third. Not only have you got to ease it off the line smoothly and get across from two to three, but also not baulk between one and two. Fluff any element of that and you look an amateur. This gearbox makes all of that a doddle without removing any of the precision. This slickly mechanical lever is just a joy to move around. 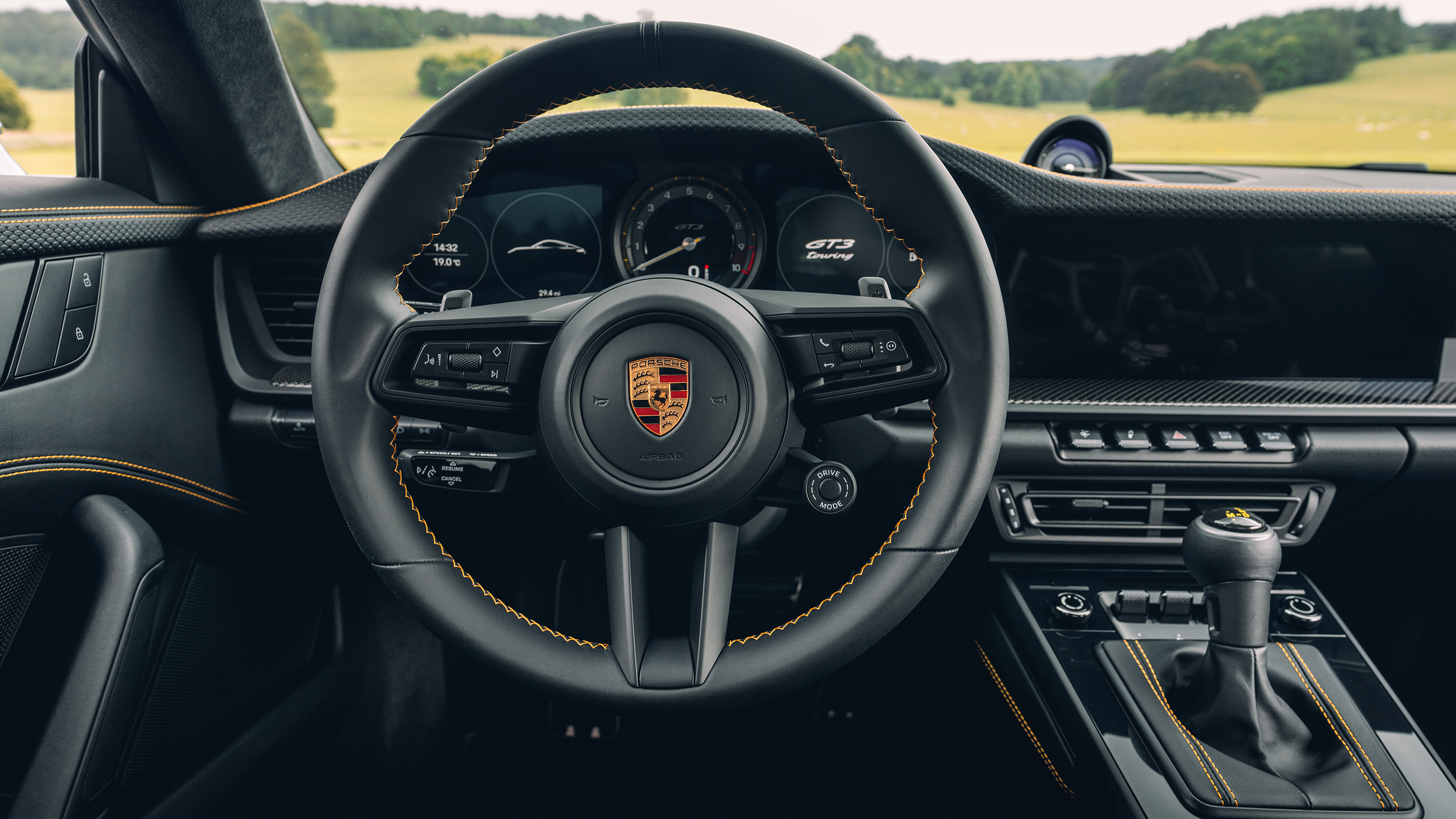 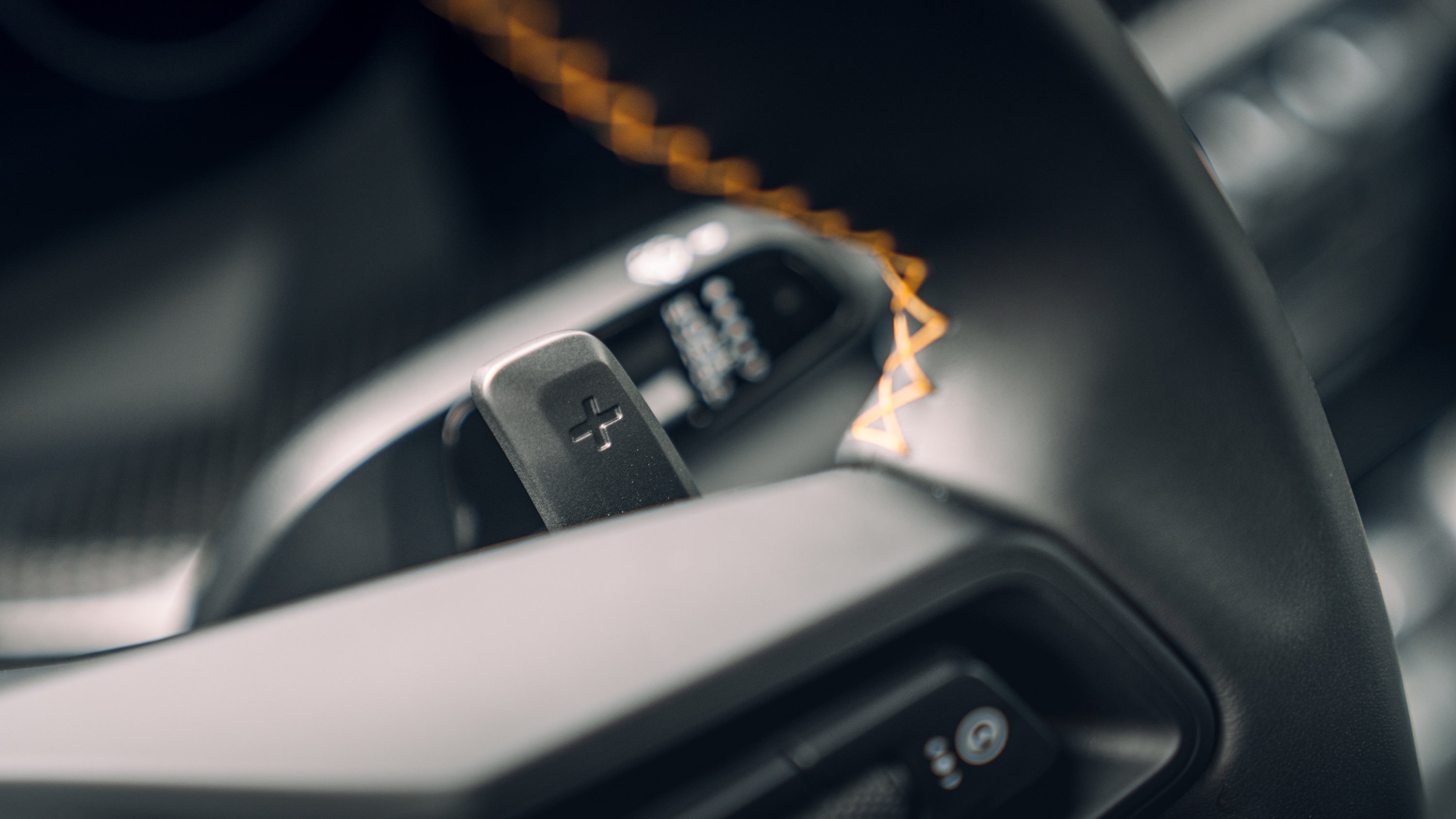 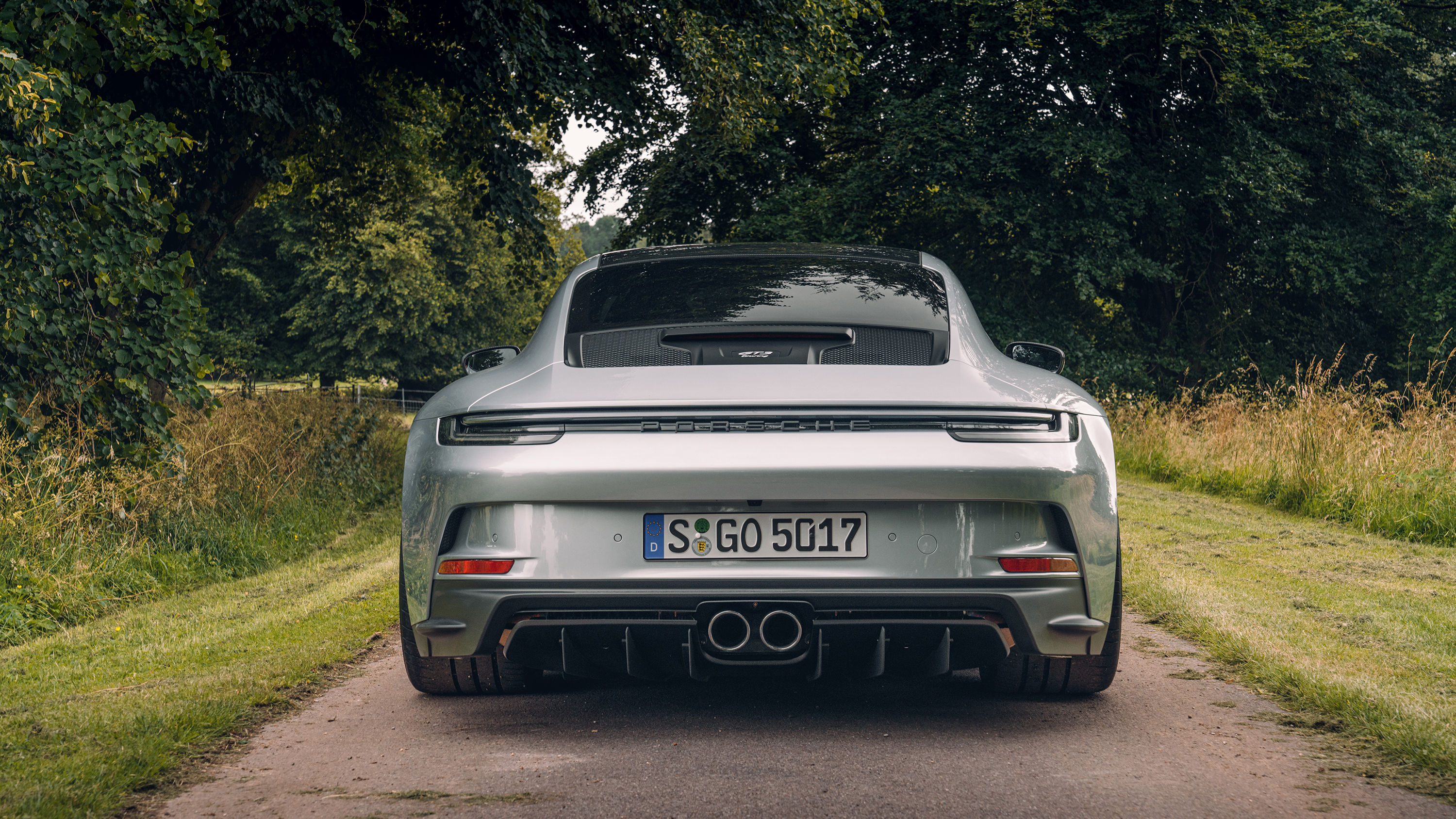 How’s the PDK in comparison?

This is the first time it’s been available on the Touring and it’s fine. But I don’t think the paddles are quite right and the manual-style gearknob – where you push the top to move the lever – feels a fraction cheap. Nothing wrong with the gearbox itself, and I still think it suits track use better, giving you one less drivetrain thing to think about so you can concentrate more on the chassis.

But for road driving, even in heavy traffic, the manual is not the pain you expect it to be. And the rewards are manifest. It gives you more awareness of this astonishing engine. Rather than just pulling a paddle whenever you like, now you’re thinking about the rev range, torque, what the road’s doing, what your hands are doing. I found myself using lower revs more often in the manual, enjoying the engine’s power and sound development across the range rather than just hitting the heights.

Five thousand rpm. Not just north on the clock, but also the point this flat six really kicks. Below that there’s superb driveability, but the relative lack of torque means you can be caught out, waiting. Above five, you never are. Here there’s focus and hunger and intensity, the needle flashes round, the revs soar, the noise thrashes. A reminder that the sense of speed is so much more important than the force of it.

That said, it’s not quite as rowdy inside as I expected. There’s a decent amount of road and tyre noise and to my ears, the engine could be even louder inside under load and get away with it. At a cruise it dies away (you’re pulling about 2,800rpm at 70mph in top).

Possibly. Or perhaps just more of a sense that it’s as good inside as it is out. I’m being greedy – god knows how difficult it must be to get a nat-asp motor through emissions tests these days (21.9mpg and 292g/km, in case you were wondering). But this is a hardcore car, very precise in its movements, especially its steering and turn-in thanks to the new double wishbone front suspension, which even on road at modest speeds has upped the sense of connection (while also lessening the ‘challenge’ of the rear engine).

It’s a hardcore car, and there’s a big change if you stiffen up the dampers. You’re immediately aware of more patter and surface interaction. Either way, how the suspension rounds off the edges, takes the sting out of even big hits, is a delight.

Grip is more evenly distributed front to rear and there’s more than enough of it, but it’s the texture, the sense of what’s going on – not just from the chassis, but the drivetrain – that makes it so special. It’s not raw, just perfectly filtered. It means this is a car you can daily drive without concern.

Would you daily drive one then?

Above almost anything else. To have this tactility and precision in such a desirable, understated package is unbeatable. Think twice before having the carbon seats, or at least make sure you can adjust the angle, as they sit very upright and if you’re thinking track use, will force a helmeted head forward. I’d have Bose, low key paintwork and treat it like a regular Carrera.