£136,643 when new
Read why you can trust our independent reviews 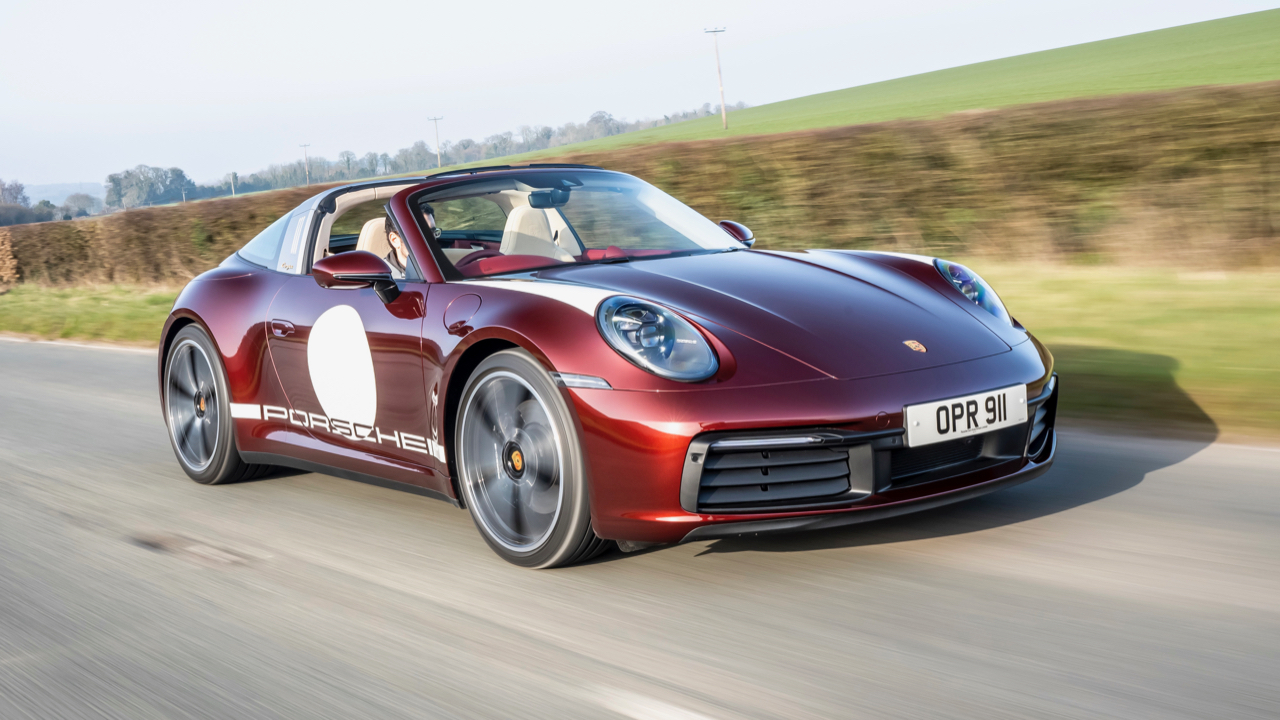 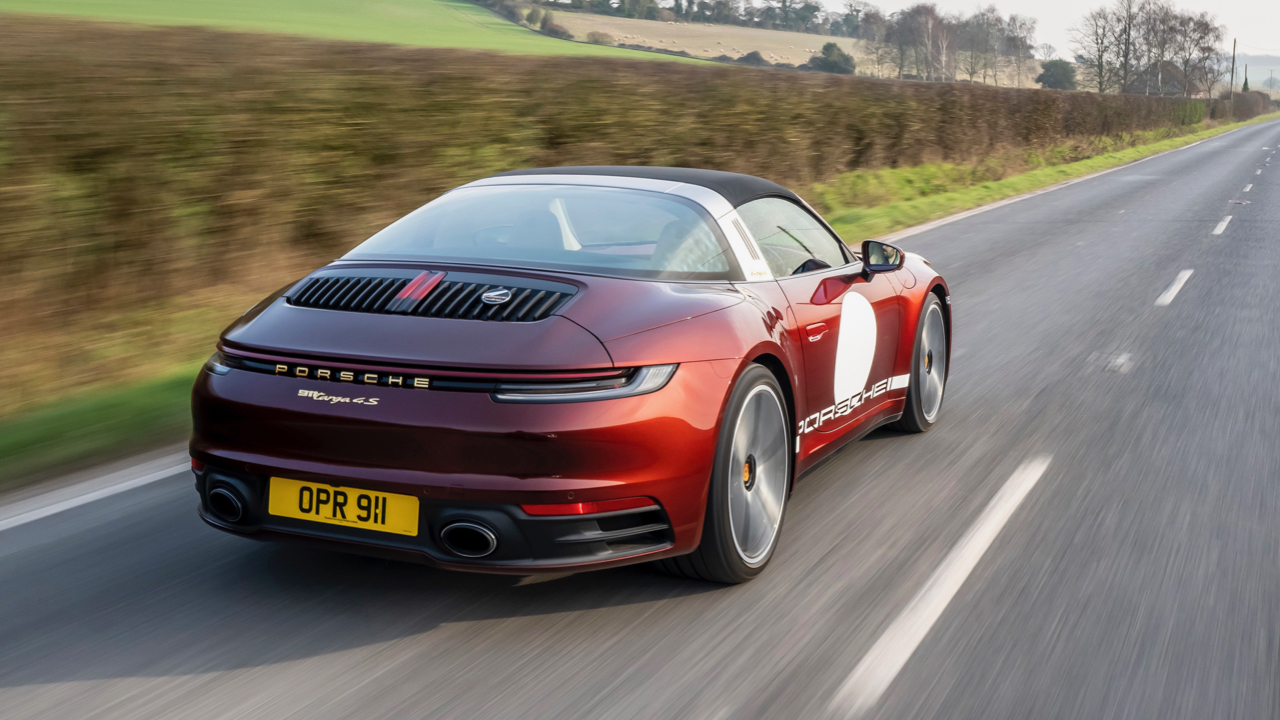 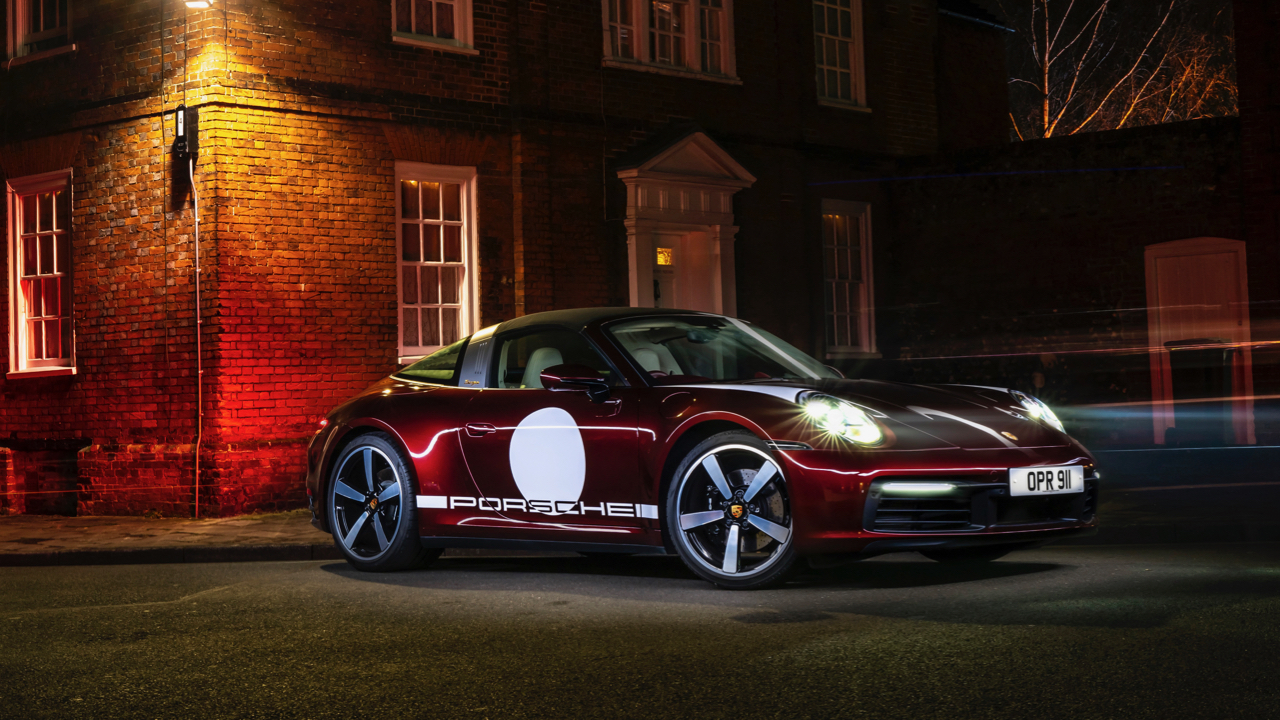 That’s… questionable. What is it?

A retro tribute. Or in Porsche-speak a 911 Targa 4S Heritage Design Edition. We can divide that into two distinct elements if you split the name between ‘4S’ and ‘Heritage’, which is worth doing as those three little words at the end will cost you £26,918.

What the blazes! How come?

I’ll come on to that. Let’s deal with the Targa 4S part first. It’s a new edition to the 992-generation 911, but the template is carried over from previous versions, which is why we all think we’ve seen it before.

How come it’s the least dynamic?

Because it’s the heaviest. At 1,675kg it’s 40kg heavier than the full convertible, 110kg up on the coupe. Porsche hasn’t bothered trying to overcome this by toughening up the Targa, but instead seems to have embraced the weight and allowed the Targa to exhibit a bit of middle-aged spread. It rides very well, it’s refined, it doesn’t urge you to stonk along all the time. It’s more experiential – and still so bloody brilliant to just operate. Go hard and there’s a bit of heave around corners, it takes longer to recover its composure, the weight is carried detectably higher.

More boulevard than B-road, then?

Yes, but I don’t think that’s the point. Think variety. Most other 911s follow a clear model progression that culminates in Turbo or GT3 and RS. The Targa takes a different tack, it’s a borderline GT, has a stronger design influence and a more extrovert nature. Just look at the complexity of that roof.

A note on that. The last gen Targa used to suffer from bad wind buffeting and noise resonance. Air would hit that big pseudo-rollover hoop and you’d get the same pressure wave as when you crack open a car window at speed. A pop-up spoiler on the windscreen surround, fitted mid-life, did partially cure it. It appears again on this new car, but the problem still hasn’t been totally eradicated. It probably depends on wind direction and a whole bunch of other stuff – I had the ear pummelling between 40 and 55mph one day, then couldn’t replicate it.

But that’s it as far as proper Targa drawbacks go (it’s also worth noting you have to be at a standstill to operate the roof). If you’re not fussed about having the lightest, edgiest or most rewarding 911, the Targa is there to make sure you don’t make a beeline for Jaguar, Bentley or Maserati. It’s a car with a sense of theatre and a retro flavour. Which is why it’s also the right car to wear this livery.

Can we start with the price? Does it really cost £26,918 to have some stickers fitted to your Targa?

It does. And yes, they are stickers, not carefully applied painted murals. Which makes the cost look even dafter – although means they can be stripped off. Interestingly – and I know I’m digressing from the price here – all of the pictures of this car are taken from a low angle, I reckon to minimise the impact of those elongated eyelashes above the headlights. Viewed from normal eye-level, they’re a bit of an eyesore – I took a picture so you can see what I mean. Porsche calls them ‘spears’ and talks about throwbacks to early days of motorsport.

Of course there’s more to it than stickers alone, with cosmetic enhancements carried out inside as well, plus the fact only 992 of these are being built. You can have it in four other colours aside from this Cherry Metallic, and this is just the first of four retro 911s (collector’s pieces says Porsche) arriving in due course. The Heritage Design Edition (HDE) celebrates the 50s and 60s, but Porsche has promised an 80s inspired car, too. Literally. Cannot. Wait. It’d better be Guards Red with a dirty great rubber whaletail on the back.

And scarlet seatbelts so it looks like you’re wearing braces! And a Blaupunkt Bremen with graphic equalisers! And a slot for your Filofax! And some of those…

Stop it now. Mainly because I’m drooling on my keyboard. Let’s get back to the HDE. It’s a tribute to an era, which means the literature spaffs on about competition history this, 356 that, here a 1963 crest, there some Fuchs-inspired wheels. What you need to know is that inside it works. It comes across as a cohesive package. Yes, even the green lettering on the dials and the gold badging. Personally I’m not a fan of the perforated microfibre rooflining, but I adore the corduroy seats. Softer, comfier than leather, and so good at holding you in place.

The roundel on the door doesn’t have to be blank – any number from 1 to 99 can be written in it. And given how much Porsche talks about further personalisation, I’m sure if you turned up with a picture of your pet Pomeranian and a blank cheque they could make that happen for you.

More actually, seeing as the HDE doesn’t up standard equipment levels. So Bose surround sound will still add £1,002, the adaptive sports seats £1,746 and so on. It looks a whole hill of money for slightly flaccid 911. I certainly came to it a cringing a bit, and although I loved the interior and being in it, found myself moderately embarrassed whenever anyone glanced my way.

But if you grew up in that era, and these textures and materials, the graphics and badging speak to you, I can completely see the appeal. It’s tastefully done. Just bear in mind that just because it looks retro doesn’t mean it’s any less complicated to operate than a modern 911. You’ll still be battling touchscreen, scrolling and menus.

Here’s an interesting story about the origins of the Targa, which seems appropriate here. Back in the early 60s convertibles were considered dangerous in the US because their occupants were vulnerable. It was a lucrative market for Porsche and they didn’t want to lose it. So Ferdinand ‘Butzi’ Porsche, taking inspiration from motorsport rollover cages, came up with the ‘safety convertible’, making the rollover bar as much style statement as safety apparatus. The car was launched at the Frankfurt show in September 1965.

The name? Porsche liked to reference motorsport races and locations in their names (Carrera came from the Carrera Panamericana race and so on), and settled on the Targa Florio. However, sales manager Harald Wagner worried that the name would be shortened to Flori, so Targa was used – and quickly became the generic name for cars with lift-out roof panels. Targa also translates from Italian as shield. A handy link to safety.

Let’s have some figures.

It is exactly what you expect, this Heritage Design Edition. Disappointing that for such a huge cost uplift the outward changes are mostly limited to some white stickers, but inside it’s much more convincing with well integrated trim and design blending old and new very well. I didn’t spot the phrase ‘carefully curated’ in the literature, but I’m sure that was just an oversight in my scanning.