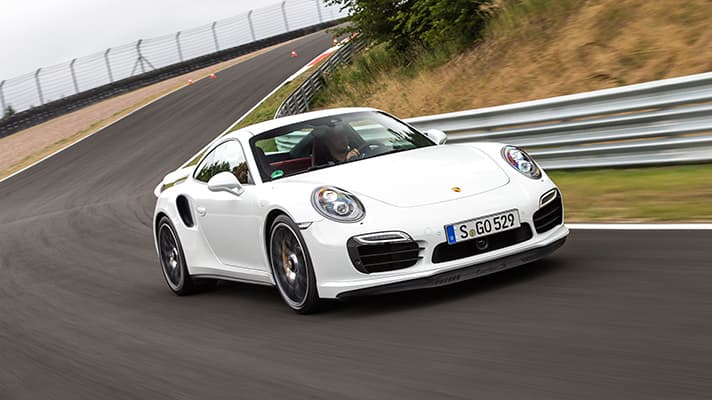 The 911 Turbo S is blindingly fast. I mean that not as a figure of speech, but quite literally. This car blinds you. Human eyes cannot cope with the sheer force of detonating from a standstill past 60mph in three seconds, the Turbo S flinging itself off the line with a lot of noise and just a hint of wheelspin. Clench your jaw, squint, gurn, it's all useless: as launch control bites, the windscreen starts to swim, the scenery closes in around you, and then, for what must be no more than a few milliseconds but feels far longer, all is a blur as the g-force squeezes your eyeballs' vital fluids in directions vital eyeball fluids shouldn't go. It is addictive and unsettling, not acceleration in the traditional sense, but something rawer: thrust, the sensation of a jet aeroplane on take-off, a relentless surge seemingly independent of tarmac and tyres.

Ease off the throttle, and the world wobbles back into view. It's official: the 911 Turbo S is too fast for eyes. Not a bad boast for the machine with a strong claim to the crown of Quickest Car in the Real World. Sure, the record books may herald the Bugatti Veyron and its 267mph top speed, the Pagani Huayra and BAC Mono may sit atop the TGTV Power Laps board. And, true, on an empty track or airstrip in the hands of His Stigness, these three might edge out the Turbo S. But on the road? The Veyron, astonishing achievement though it is, is too large, too heavy, too damn intimidating to use on normal public lanes. The rear-drive Huayra and Mono, meanwhile, require a driver of superhuman skill to exploit their full potential if the tarmac is anything other than bone-dry and perfectly smooth. If we're talking a real, normal driver on a real, normal road, I'm not sure there's anything on earth to touch this rear-engined slot car.

Some numbers. The new Turbo S, with its bi-turbo 3.8-litre flat-six, sends 553bhp and a ludicrous 553 torques to four very large tyres. That's some 30bhp and 37lb ft more than the last-gen 911 Turbo S, which few regarded as underpowered or slow. The new car's 0-62mph time is officially quoted at 3.1 seconds, which is frankly silly for something with at least a nominal set of rear seats and a decent front boot. Yet our unofficial stopwatch tests suggest the Turbo S might even be a couple of tenths quicker than that. Quick enough to cause temporary ocular disability, at least.

To some extent, liberating a lump of extra power and pace with the aid of a couple of turbos is the easy bit. And a company less engineering-obsessed than Porsche might be content with that alone: no doubt the chassis of the standard 911 Carrera 4S is competent enough to deal with 553bhp and whatever treatment any Turbo S owner might throw at it.

But Porsche doesn't think like that. Porsche, being Porsche, has entirely re-engineered the 911 for Turbo duty. For a start, take a look at that big ol' booty. The Turbo S's rear track is some seven centimetres wider than that of the standard rear-drive 911 Carrera, and 15cm wider than its own front track. This is fine news for grip, but means that no matter how neatly you reverse-park your Turbo S in a supermarket space, it'll always look a bit wonky.

Like the new 911 GT3, the Turbo S employs rear-wheel steer, electromechanical actuators angling the rear wheels some 1.5 degrees either way: against the fronts below 31mph to reduce the turning circle and increase agility; or with the fronts over 50mph for better stability. And it works. Unlike rear-steer systems of old, you get no impression of it doing its thing, only of a car with astonishing high-speed poise. Does it increase manoeuvrability under 31mph? Couldn't tell you. The Turbo S rarely spends more than two or three milliseconds below 31mph at any time.

There's clever aero too. As well as that fat rear wing - which pops up at 75mph and, in Sport Plus mode, angles seven degrees forward for extra downforce - the Turbo S boasts the world's first variable front spoiler, a four-inch-deep rubber skirt (stop it) that extends from the bottom lip of the front bumper in three sections. At low speeds, it remains retracted, its side sections only unfurling as you pass 75mph. But in track-attack mode, the spoiler is fully extended, for both maximum downforce and maximum usefulness as a driveway snow shovel, come winter.

Porsche says the rear wing and front splitter add 132kg of downforce, which sounds mighty impressive until you learn you have to hit 186mph to generate that figure. Perhaps more telling is that the rubbery skirt cuts around two seconds from the Turbo S's Nürburgring lap time, which stands at 7m27s on standard production tyres. That's faster than a Carrera GT, a time no doubt aided by the Turbo S's monster, standard, carbon-ceramic brakes, which measure 410mm diameter up front and 390mm at the rear.

What this newness adds up to, predictably, is simply ludicrous speed, everywhere, all of the time. Autobahn, B-road, gravel, rain... no matter - the Turbo S is the sort of car you step from after a drive, even a short one, thankful to still possess your licence. It's the sort of car I'd be scared to own for fear it might rewire my concept of what's physically and socially acceptable on the road. Perhaps ironically, the safety net of that four-wheel-drive system makes it somehow scarier: this isn't a car that'll warn you when it's about to go very, very wrong. The first time you lost it would be very big, and it would be your last. Traction traction traction and oops missed the corner and ah look I'm doing 200mph sideways and now I am on fire.

What a drivetrain, though. No, the turbo six doesn't scream like a Ferrari V8, but has a unique soundtrack all of its own: a bassy, phasing hum at idle, like something from a Seventies sci-fi series, morphing into a barrage of cannon-fire exhaust as you thump up through the gears. Such is the flat-six's flexibility that on any A- or B-road you never need change out of third, a wrecking ball of a gear that carries you from walking pace into triple figures incurring only minor blindness along the way. Not that changing gear is a chore: now Porsche has ditched the daft push-me-pull-you buttons from its double-clutch gearbox - replacing them with conventional right-for-up-left-for-down paddles - this 7spd PDK is just about the best in the business, capable of smooth anonymity or punchy, instant changes, depending on your mien. In the naturally aspirated, rear-drive 911 GT3, we might bemoan the lack of a manual gearbox, but PDK is a perfect fit for the Turbo S's ‘keep it pointing in the right direction, and we'll sort out the rest' philosophy.

That said, if you're thinking the GT3 is the hardcore sports-thing and the Turbo S the loping cruiser, don't be fooled: this is no softie. True, you wouldn't want a car with any hint of vagueness when you're cracking 190mph on the autobahn, and even on Germany's ropiest roads, the ride remains the right side of acceptable, but it's an unyielding bugger nonetheless.

Talking of acceptable, Porsche is extremely keen to highlight the eco credentials of the new Turbo S, pointing to economy of 29mpg and CO2 emissions of 227g/km. These are, indeed, impressive figures for a 553bhp supercar, but the anti-petrolists, we suspect, will find plenty else about the Turbo S to rail against. Like its 198mph top speed.

For us pro-petrolists, however, what is there to complain of? Not much. So the Turbo doesn't offer much in the way of fingertip feedback, but that's not what it's about: the 911 GT3 is there for those who want to explore slip angles and Nomex outerwear. Perhaps the biggest issue is the price: the 911 Turbo S starts at £140,000, which sounds rather a lot for a hopped-up VW Beetle. Or does it? On power, pace and pub stats, the Turbo S looks decent value alongside the supercars it'll match for pace, not least the Ferrari 458 and McLaren 12C, both of which Porsche benchmarked for performance.

Of course, if all you want is fast and four-wheel drive, critics will point out the Turbo S is nigh-on double the price of the 543bhp Nissan GT-R, perhaps the only other car that can really rival it for devastating, everyday pace and immutable traction. But the Turbo S is a more complete, rounded proposition: perhaps the ultimate everyday supercar. Your eyes may disagree.