£48,800 when new
Read why you can trust our independent reviews
Dave Burnett
Published: 28 Sep 2021
comments
Skip 20 photos in the image carousel and continue reading 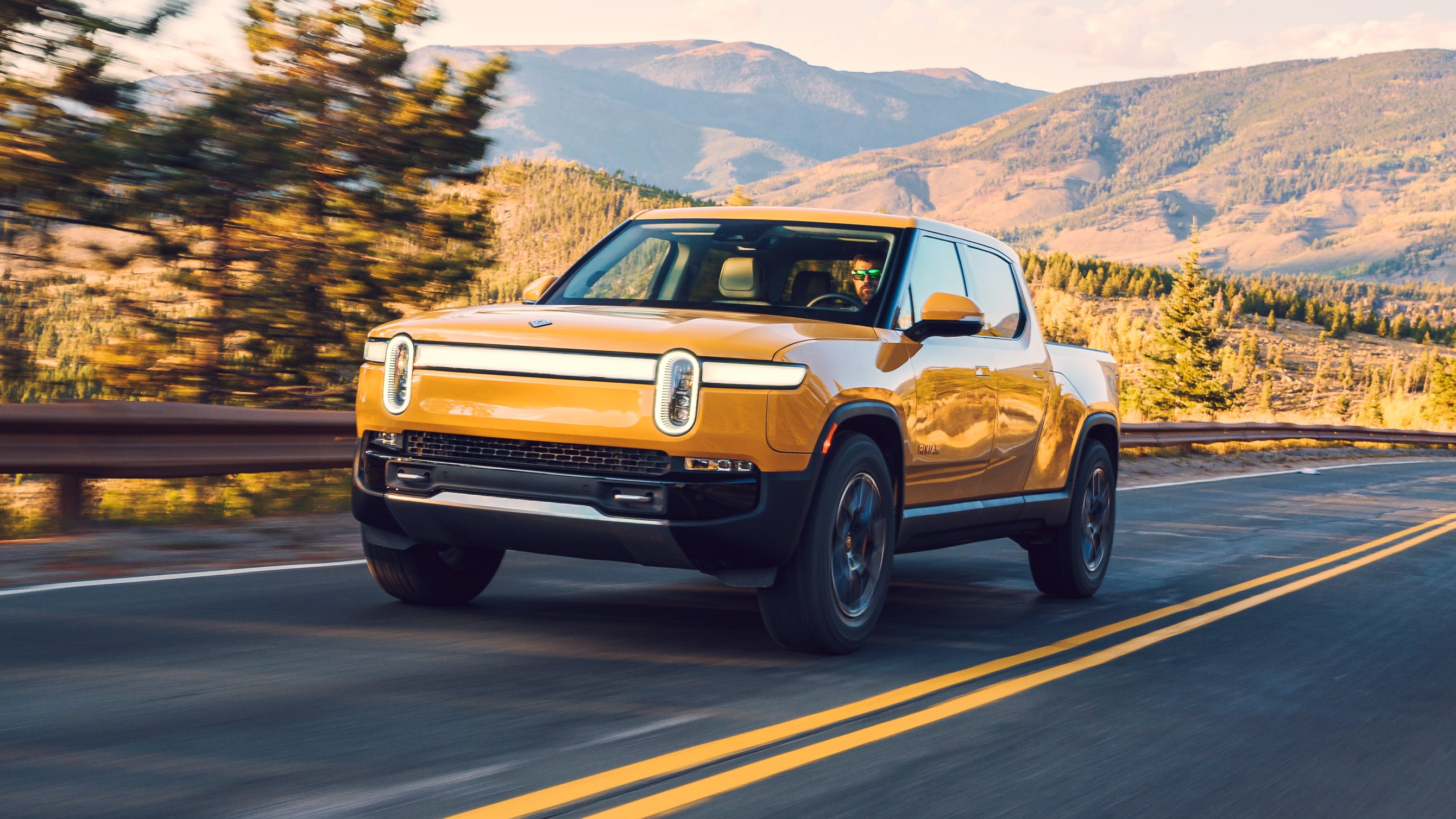 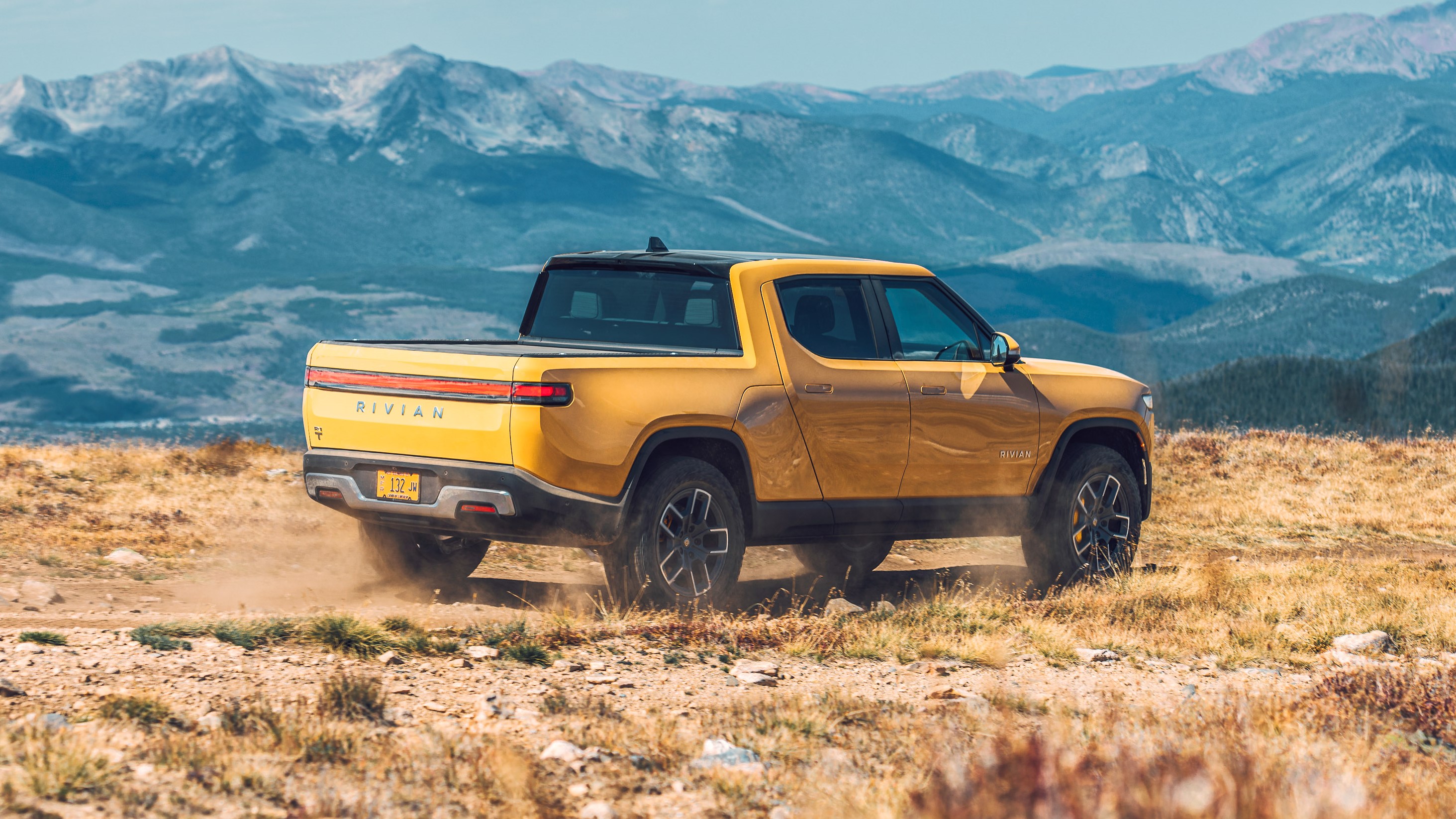 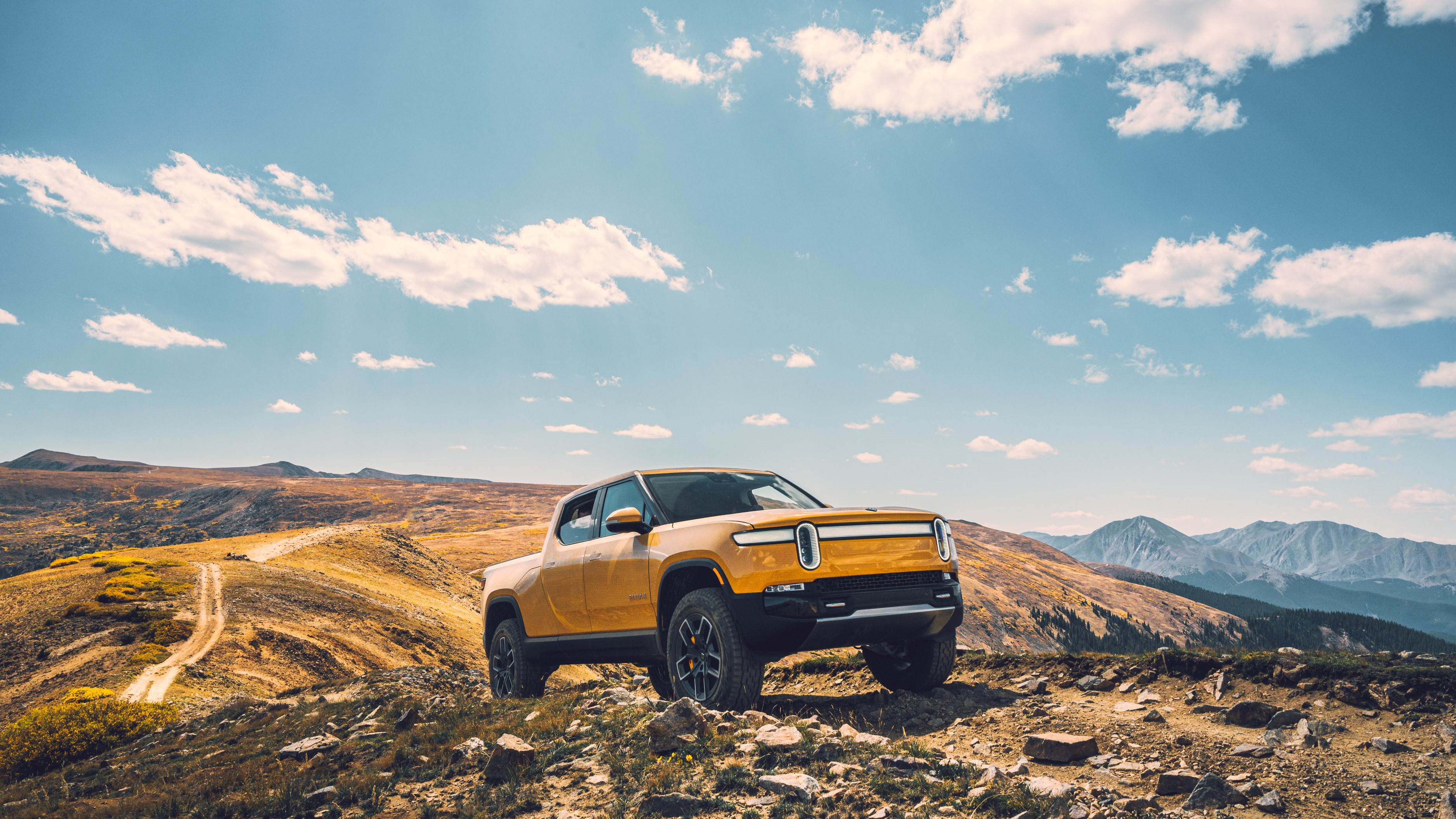 What, someone has beaten Tesla to building a production electric truck?

That’s right, while Tesla's Cybertruck is still a concept fantasy, here’s a real, honest-to-god, production electric truck, built in Normal, Illinois. Meet the Rivian R1T. In the US there have been announcements from pretty much every major carmaker for electric versions of their current truck, but until now not a single fossil-free version has rolled off an assembly line.

Talk us around it.

Size-wise, the R1T is a bit bigger than a standard European pick-up such as the Ford Ranger, a little wider, and at 5.5 metres in length about 300mm longer. About the same amount smaller than the iconic F150 in a similar spec. A good size then – but a better design, mating familiar truck proportions with bold, almost jarring futuristic styling cues. A full width glowing white LED bar spans the nose in lieu of a traditional grille, with a matching full-width taillight out back. The vertical headlight stacks – Rivian calls them Stadium Lights – looked wrong at first but I'm surprised how quickly my brain normalized them.

The two integrated tow hooks on the front bumper are the biggest indicator of its true off-road capabilities (they're rated to stay attached even when dragging the R1T out of mud up to the door handles) and there's a trailer hitch too, neatly hidden behind a panel out back. It's clearly a "real truck" from any angle, which is important in America – based on my research in mall parking lots. But from there, things get deliciously unfamiliar. Look underneath and you'll see...

Let me guess – not much?

Bingo. No locking differentials, no transfer case, no fragile, essential mechanicals dangling down waiting to get bent on a tree stump. The floor is completely flat. This is extremely good news off road, because obstacles that would normally require a little jig to get round, lest we smash a differential to bits, now can be driven straight over without a care. Even if something does scrape the floor, it's just the floor. You'll still get home. Adjustable air springs can raise or lower the chassis by up to 165mm on the fly. When maxed, this provides 370mm of clearance.

Instead of conventional locking diffs, we have four powerful permanent-magnet electric motors, two each front and rear. These motors, mounted centrally in pairs, can individually vector torque completely to either side, and there’s a lot of it. The front motors alone makes about 415bhp, the rear one a bit more, for 835bhp combined. Better yet – and much more importantly – with both motors giving full beans, there’s over 900lb ft of torque. That's enough grunt to shove Pangaea back together. Combine the insane power figures with the precise, real-time control the R1T has and you have an astonishingly capable off-roader.

I’m still not convinced this thing is any different.

Fine. The R1T can even order the wheels on either side to rotate in opposite directions, spinning the truck in place like the Tasmanian Devil.

Woah! That is new. But probably not very useful or easy on tyres…

Agreed. So back to more useful stuff. The R1T has a range of around 300 miles and sure, we used it up quicker climbing mountains. But with the regenerative brakes set to max we added range on the way down, plus the regen is so strong you can effectively one-pedal this thing around.

Eventually though, all dirt roads must end. Which in the past has meant deciding where we stand in the Eternal Off-Road Compromise: the better a vehicle performs off-road, the worse it will be on-road. Huge, roaring tires. Steering with more play in it than Bill Shakespeare. Hopeless fuel economy because we installed short gears to help the poor acceleration because of the huge, roaring tires. You get the idea.

The R1T's on-road manners might just be the most shocking part of the whole truck. First, the air suspension drops down to maximise a centre of gravity that’s already low thanks to the flat-packed "skateboard" chassis. The active dampers are external reservoir triple-valved monotube shocks that work hand-in-hand with Rivian's Roll Control system. This electro-hydraulic system ties together the suspension at all four corners.

Neat, flat cornering. From a pick-up truck. On heavy off-road tyres. Imagine what it's like on the optional 22" sport wheels. It grips well around the corners, but more than that it’s smooth running and sophisticated.

Up to a point. Because here’s how to detect if your car is riding well: try to use the touchscreen. You can in here, but no matter how polished the ride, burying every single control from the off-road modes to the stereo in the central touch screen is a hassle.

Seems to be the nature of things these days…

Yeah, but you forgive it here because the cabin design is more akin to a high-end Volvo than a regular truck. It’s stylish and modern, with high quality, durable surfaces everywhere. The roof is a single piece of glass for a panoramic view of the sky. There is real wood on the dash, all sustainably sourced. The Meridian sound system is one of the best I've heard in any new vehicle, and if you pull the handle at the bottom of the center console, you'll find it's actually the Camp Speaker, a wireless bluetooth powered hi-fi you can take with you. Thoughtful touches like this set the R1T apart.

And here’s another, the Gear Tunnel. Behind the rear passenger doors are two more small doors on the flanks that open to reveal a storage area that spans the width of the truck. You’d get a person in there, and based on the fact that there are glow-in-the-dark release buttons inside, I'm not the first to have thought that. The open doors double as seats. Or stands, to help you load things into the bed. That tunnel can also contain the optional Camp Kitchen, a slide-out pod with convection burners, utensils and even a grey-water system.

Combined with a locking, powered tonneau cover and another load bay under the bonnet (what, you thought there was an engine up front?) this has to have the most hidden storage of any truck ever made.

The R1T is genuinely a huge accomplishment. To make something this purposeful, this thoughtful, this good would be an achievement for a company like Ford or Land Rover, but for it to be the first vehicle from a start-up? Maybe something this new and ground-breaking can't come from a big firm. Too many cooks in the kitchen.

And the best part is I don't have to tell you it costs as much as your house. The R1T, with all 900lb ft of torque and the vast majority of the features mentioned above will set you back just $67,000 (£48,800) in the US. Go ahead and compare that to all of the other vehicles on sale today for that amount that do 0-60mph in three seconds flat. I'll wait.

UK relevance remains to be clarified. Apparently Rivian is in talks with the UK government about building a factory near Bristol, not necessarily to produce the R1T, but other, smaller, more Euro-focused cars using the same technology. This one? Expect to see some imports landing from early next year. This, rather than the Cybertruck, is the truck market’s game-changer.