Review: is the new Audi R8 the ultimate everyday supercar? 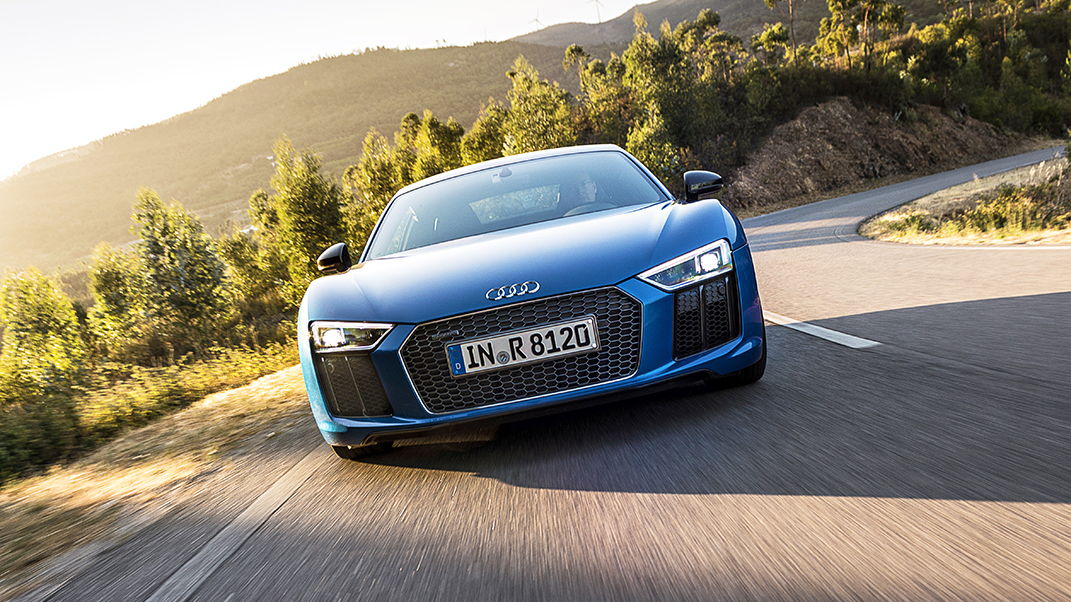 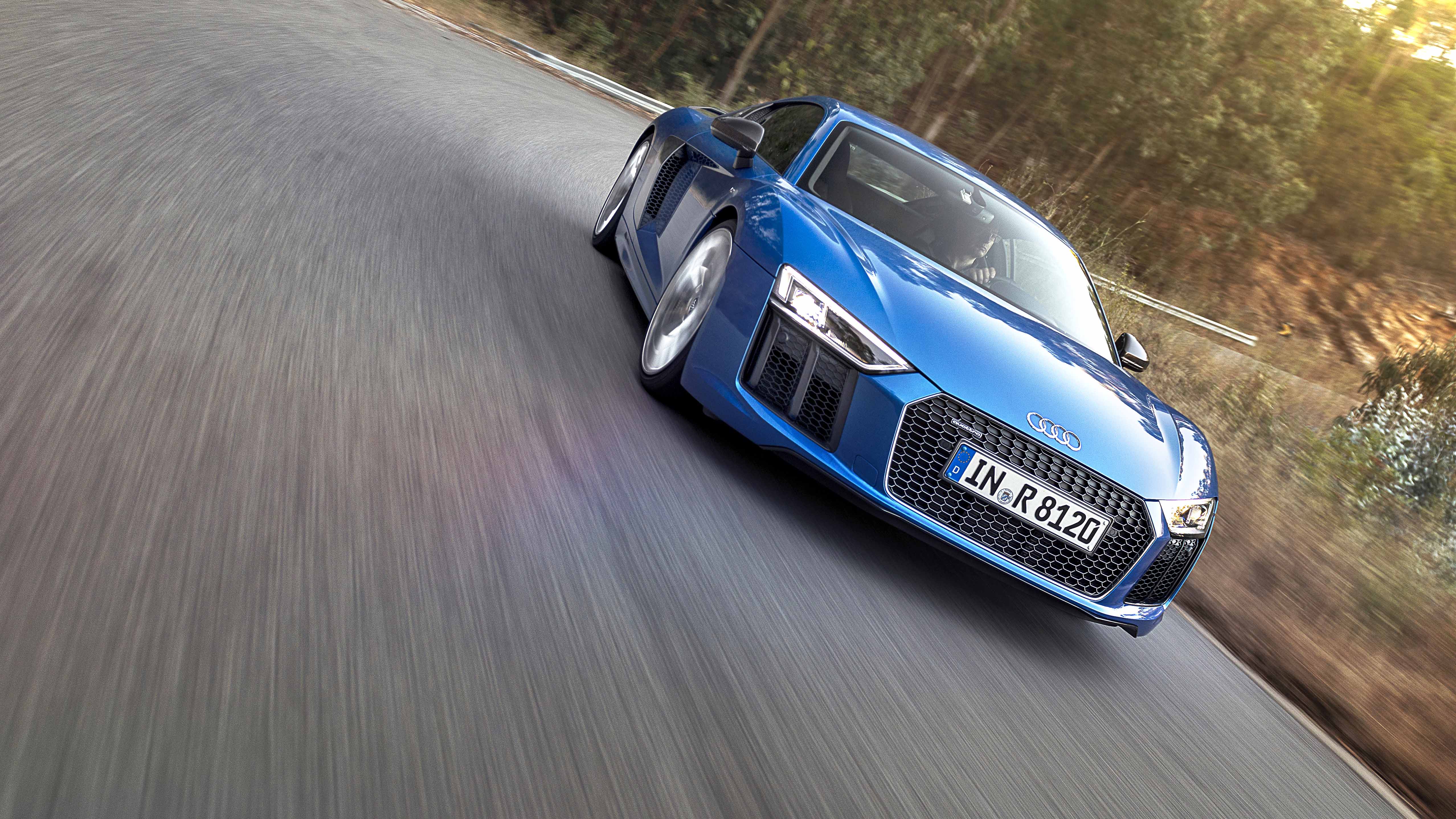 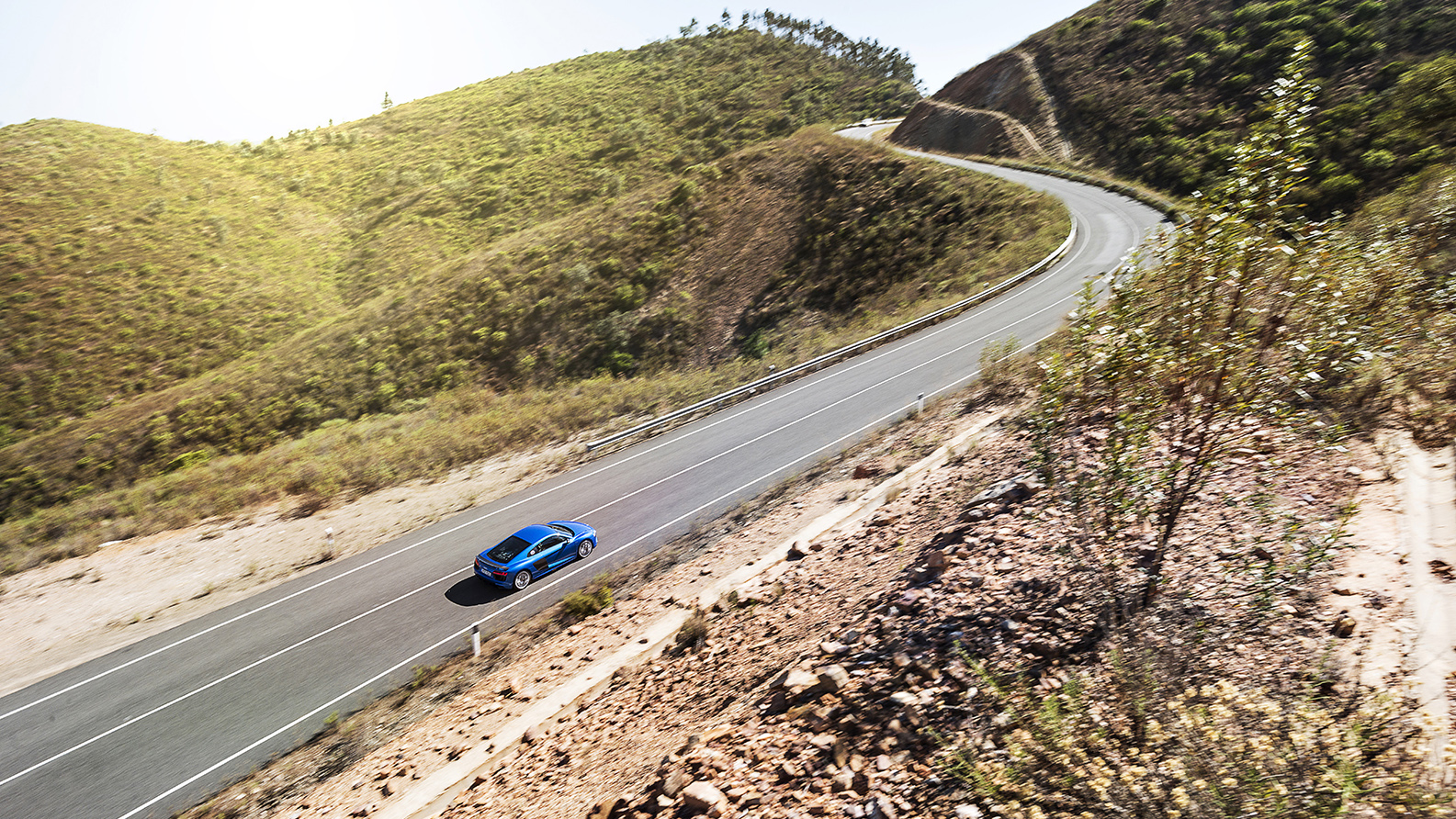 I realise the Daily Mail and other self-appointed guardians of the nation’s moral outlook don’t like the idea, but the ‘scandal’ of ‘satnav racing’ is simply what we all do, isn’t it? Tap in the destination, note the ETA, and it’s only human to hope to be there before then.

That’s not a ‘lethal race’, it’s just avoiding the impoliteness of unpunctuality. It’s no more scandalous than hurrying to eat an ice cream before it melts down your wrist. Even so, my distance-over-time trace in Audi’s new supercar this morning was a little extreme. It had taken a while to get a set of photos that do justice to the R8’s deceptively epic form. Then we had a plane to catch. I keyed the airport into the satnav.

The time it calculated we needed was exactly twice the time we had available.

Yet we arrived when we needed to, and it didn’t even feel like a rush. There’s an awful lot that 602bhp and quattro can do for you. Yes, the roads were dry, so in theory two-wheel drive would have been fine, but I just love the sense of security the R8’s arrangement brings.

Even if the Mail wouldn’t approve, I was actually being prudent. I’d go into the many, many bends with due caution. Only at the instant I could see that the way ahead was clear would I let that marvellous engine sing its heart out, feel the tyres key into the surface, and be away down the road like teleportation.

The new R8 is all-round sharper and more alert than the old one, a car that was, let’s be fair, hardly soggy. These are no mere tweaks. The whole tub and body structure is new. It still has a largely aluminium spaceframe and all-aluminium panels.

But the whole lower central section of the tub, the part you sit in including sills, lower B-posts and bulkhead, are now made of carbon fibre. Stiffer, lighter, better. That section will really help when making the convertible. The 1,555kg kerbweight is extremely lean when you factor in the 10 cylinders and four driven wheels.

This engine really is a rare treasure

As for engines, well, the V8 has gone, at least for the moment. The old car launched as a V8, but every time Audi added more cylinders or power (first the V10, then the V10 Plus) they took the lion’s share of sales.

So this time around it’s just the 5.2-litre V10, with 533bhp, and a Plus version with 602bhp. The Plus also gets firmer suspension and shorter ratios for the upper gears for even more venomous acceleration. The critical flag to identify the Plus version is the fixed carbon-fibre rear wing, rather than a more modest hideaway one.

This engine really is a rare treasure. Download its furious voice and set it as your phone’s alarm tone – a literal wake-up call to those who say turbocharged engines can sound great. They can’t, not compared with natural aspiration and multiple pistons moving up and down a hectic 8,700 times a minute, at which point they’re hitting 60mph in the bores.

Absent any forced aspiration, the R8 engine lacks the easy disdain of a high-boost mid-rev punch. While you’ll often be stroking a turbocharged supercar along pretty briskly using only 3,000–4,000rpm, in the R8 you must take up residence in the fives. But that ain’t the half of it.

Somewhere between 6,000 and 6,500, something magical happens, a sudden quickening of its pulse, a crazed resolve to aim ever upward until the clock strikes red at 8,700. And throughout all that, the response to the right pedal has that gorgeously exact and instantaneous quality you just never get with a turbo motor. 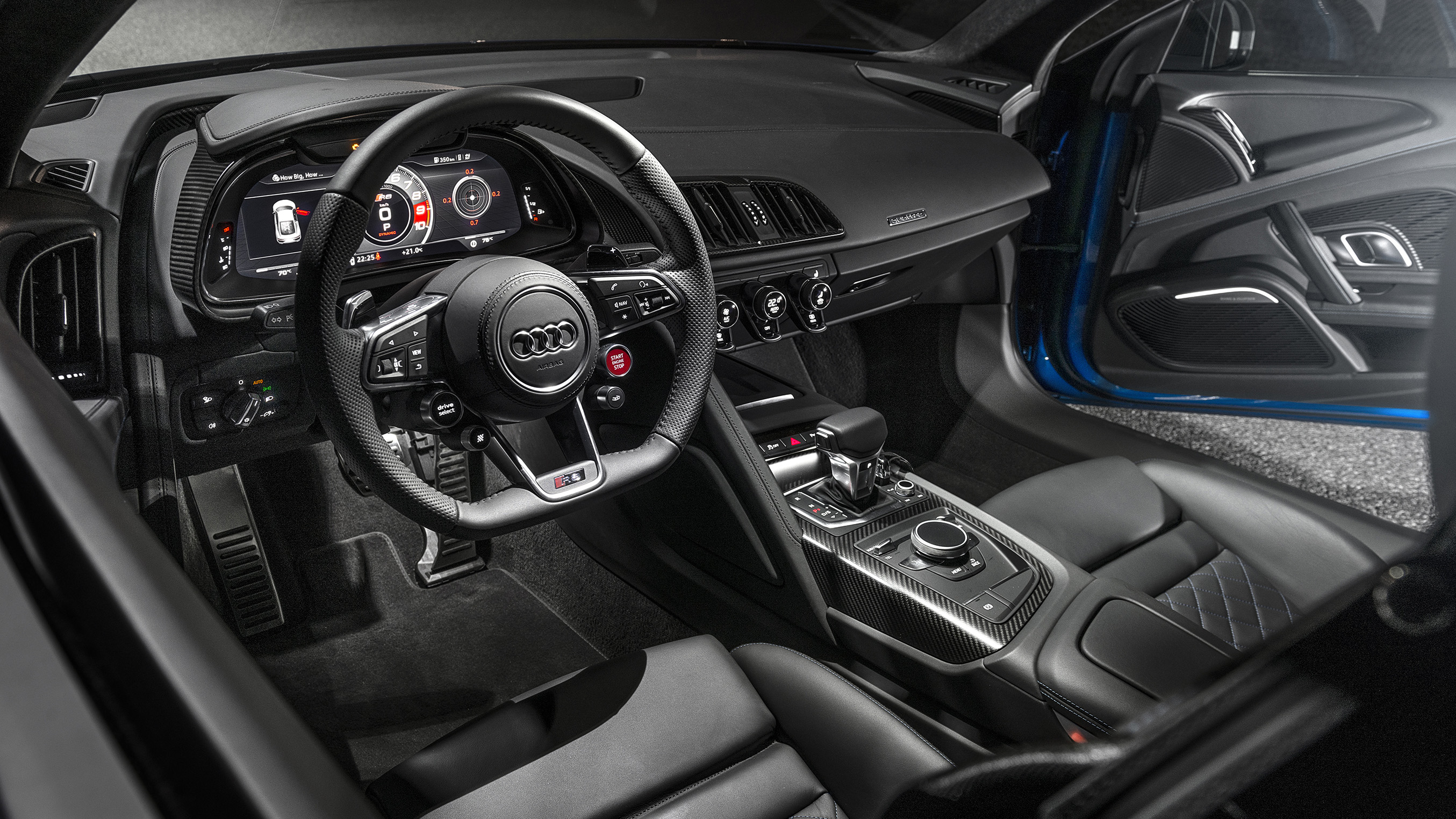 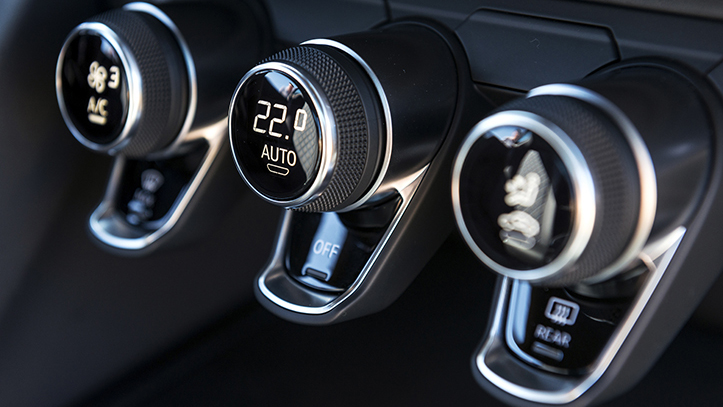 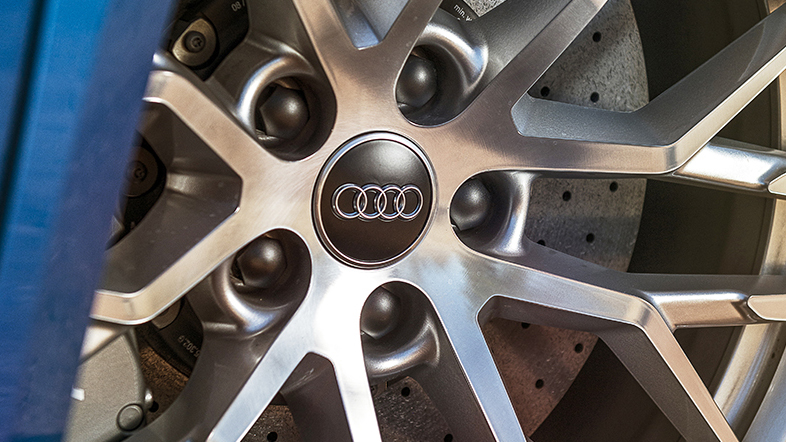 Compared with the last R8, the engine now gains an additional, indirect injection system to help low-load economy and cleanliness. At high revs it’s the direct injectors that do most of the work, as before. That stops knock and keeps the pistons cool. Just as well, as the compression ratio has been squeezed to an even more extreme 12.7 to one. It’s dry-sumped as before, so the crankshaft is down at wheel hub level, which keeps things nice and flat in corners.

The sound really does have echoes of the old pre-’06 V10 grand prix era –­ a tingling scream underlain with a sexy lower-register huskiness. Geek alert: it stems from the fact that corresponding pairs of pistons from opposite banks share a crankpin (it makes the crankshaft stronger). So the firing intervals are uneven, alternatively 90 degrees and 54 degrees.

So you’ve got to concentrate if you want to keep the engine in its most frantic band. To do that, you’ve an ally in the gearbox, a seven-speed twin-clutch with uprated software. It’s now eyeblink-rapid and supernaturally smooth, with tiny latency after you pull the paddle. And yet the ’box also manages to be extremely smooth in Comfort or Auto mode, burbling blamelessly through town.

The chassis matches the powertrain. It’s more alert than ever before, thanks to a firmer spring and damper set-up, and a centre diff that’s no longer passive but electronically controlled. So it’s a very rear-drive car on the way into corners (for agility) but then sends urge to the front on the way out (for security), although in the sportier driving modes it’s a generally more rearward bias. An optional active steering system, fitted to our tester, varies the ratio according to zillions of parameters.

Again, the way it does that depends on the driving mode you’ve selected. And the dampers are programmable too (like on the old car). There’s even a set of additional ‘performance’ modes which lock the steering into a fixed, very direct – maybe too direct – ratio. These alter ESP and damper and centre-diff behaviour according to the weather you dial in: snow, wet, dry. Or maybe turning the knob actually alters the weather. Wouldn’t be surprised, this car is so clever. Frankly there are too many modes to fathom in just two days of driving.

It’s more alert than ever before

Anyway, in the sanity modes the R8 is ultra-secure, if a mite dull. But the great thing, in spite of all that electrickery, is it feels natural. The stoutly unflappable brakes, big carbon-ceramics, only add to the sense of security.

So you get confident and wind the various systems’ wicks up. Plunge into a corner and it taps you on the shoulder, telling you the grip is expiring by gently understeering, clearly felt through the wheel. Then you get the V10 to do its thing and the car squats, leans its rear out a fraction and lunges off. It’s all about small slip angles, but you can trim them as you like, and feel and almost taste them.

It’s an engine car rather than a chassis car, the R8, in that keeping the engine in its zone takes more of your concentration while the grip can be left to look after itself. But if you find the time to study its subtleties, there’s a lot of love in the cornering too.

You’ll remember that the first R8 was very much the most liveable mid-engined supercar. Now we have the McLarens, and they’ve eclipsed the R8 in ride and visibility. But if I had to take a supercar on a winter-night road trip, the R8 would stand alone, not just for its all-wheel drive but for its fabulous laser-and-LED headlights.

Indoors, of course, Audi has thrown its kitchen sink at you. You’ve got the superb graphics and design of the ‘virtual cockpit’ screen, the telematic features of a high-end saloon, brilliant ergonomics and quality. Yet it still feels like a supercar: low, wide, embracing. Special. Like a supercar to drive, too. And just because it doesn’t opt to scare you, don’t imagine it hides in the emotional background.