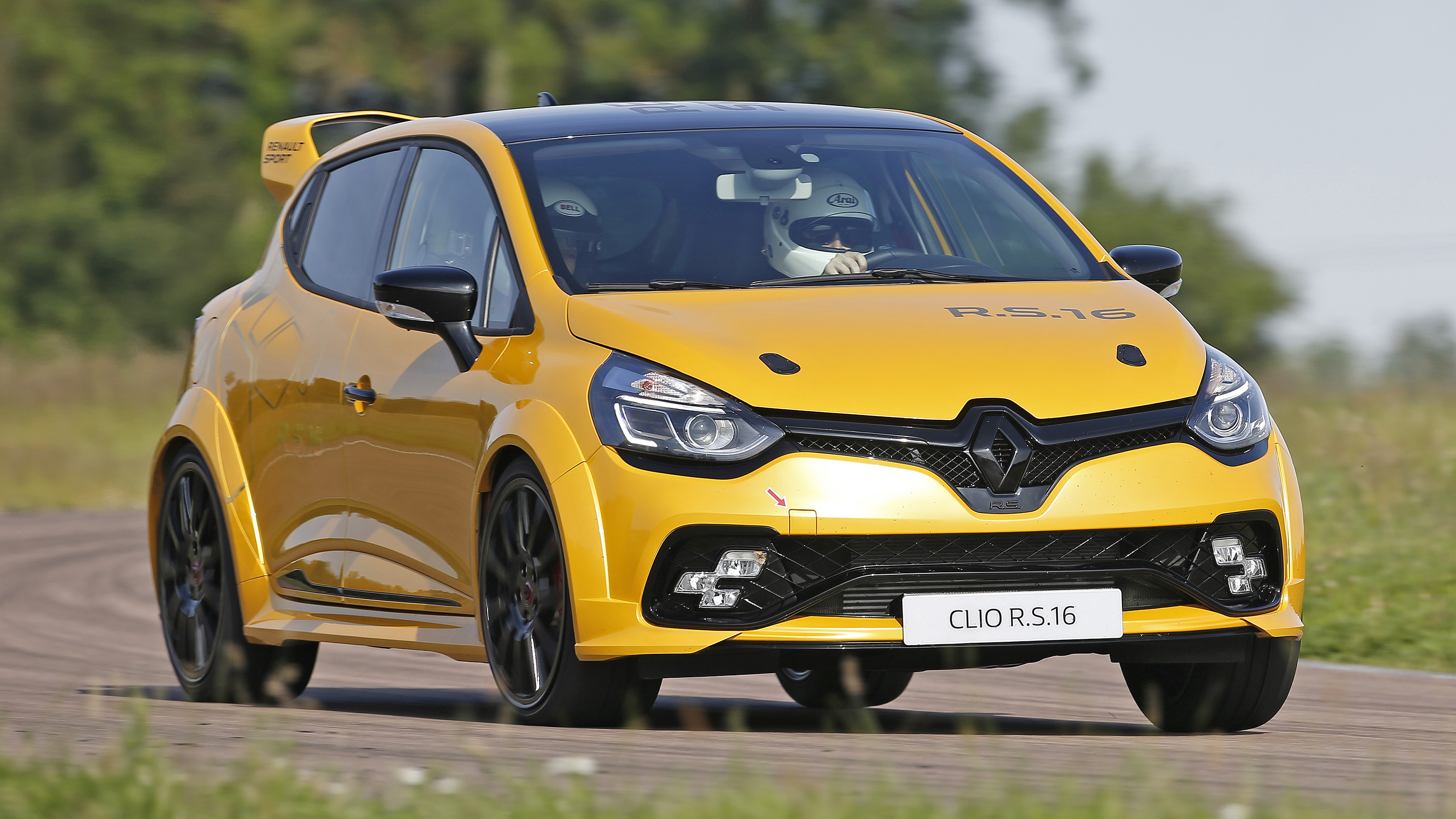 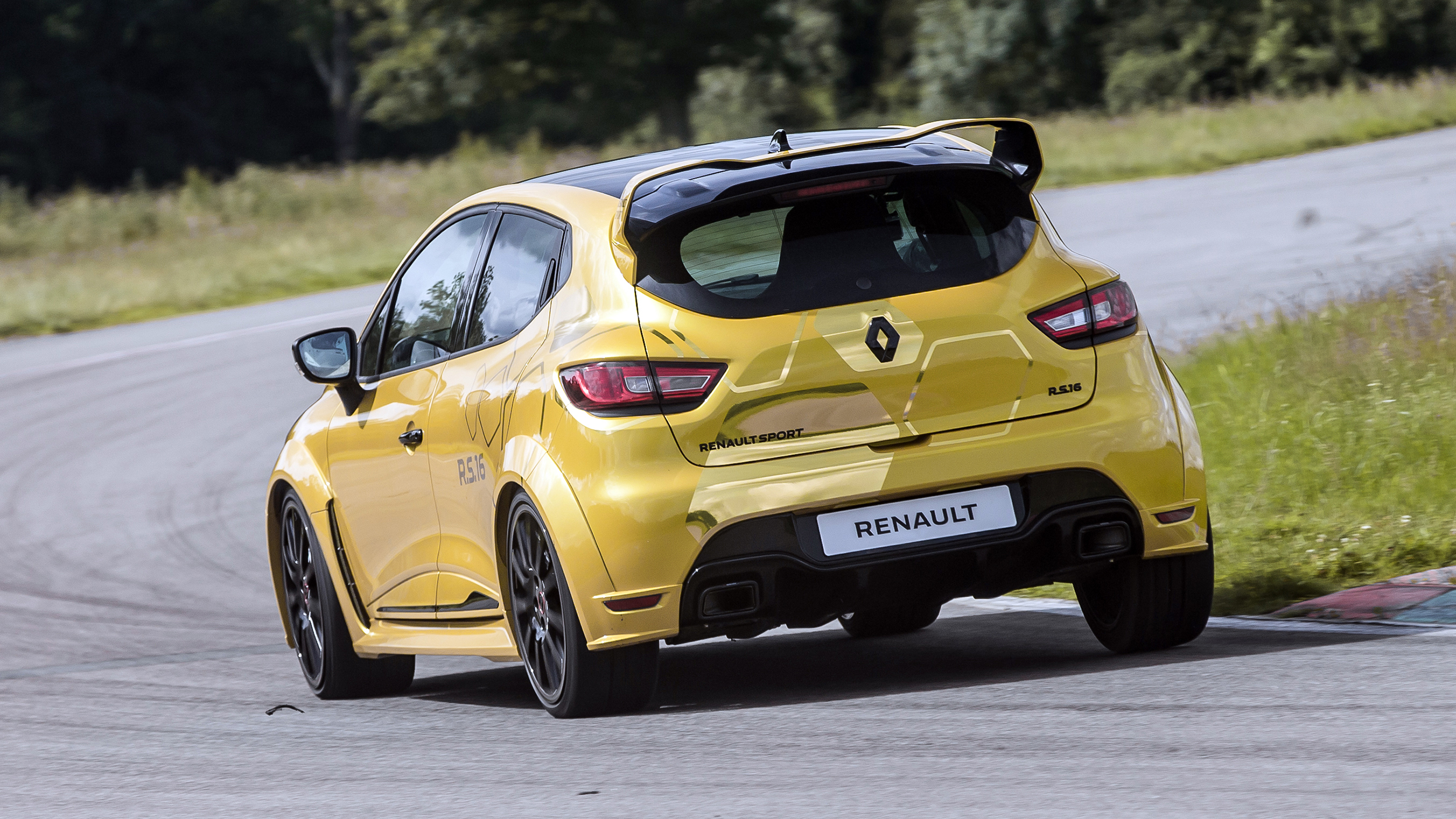 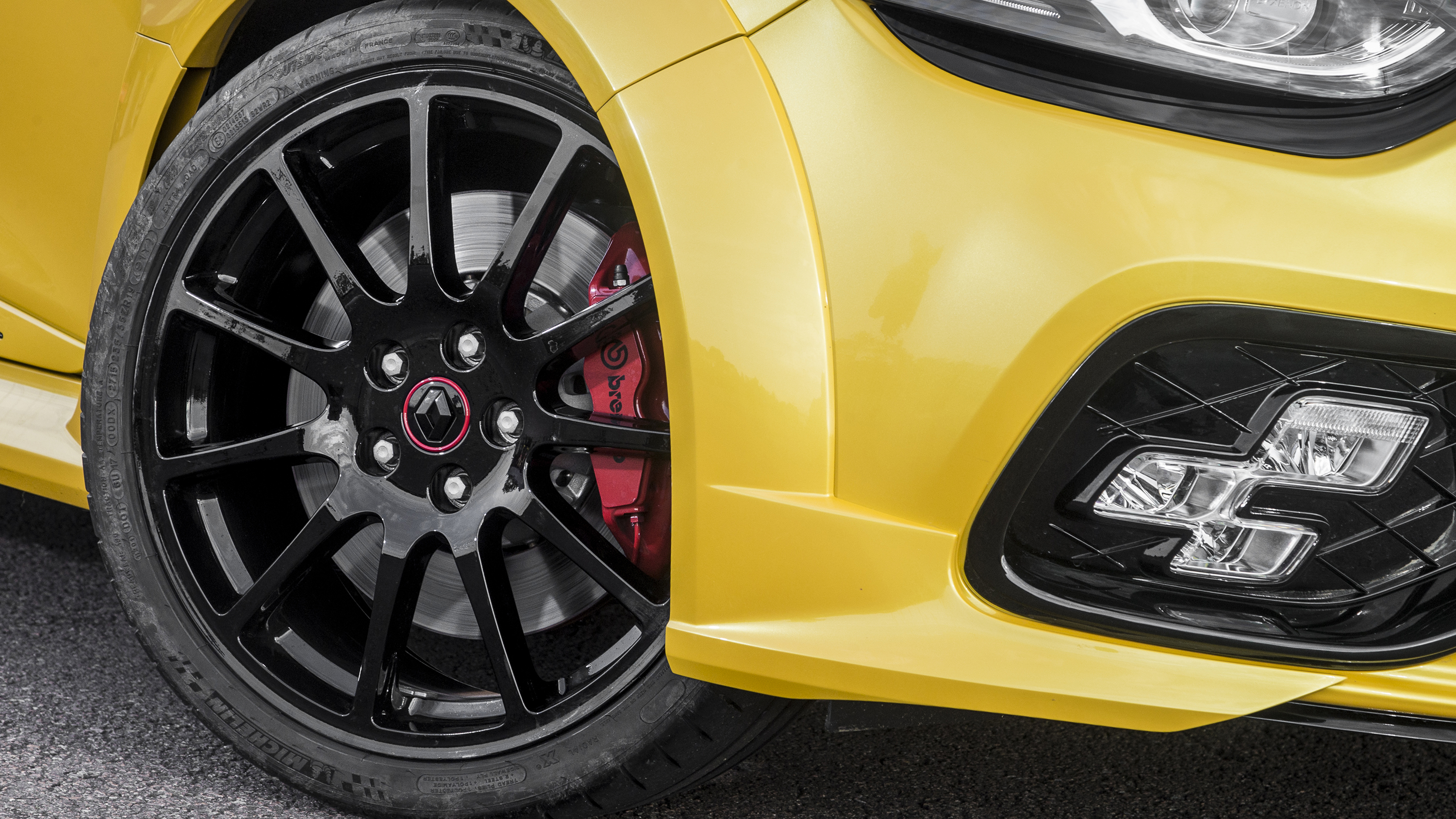 It is the Renault Clio RS16. We’ve had a good gander round this already, but to summarise, you’re looking at not just the fastest Clio ever, but the fastest Renault full stop.

It’s the current-gen Renault Sport Clio, but with its 1.6-litre engine and paddleshift transmission binned in favour of a 2.0-litre four-cylinder turbo and a traditional, six-speed manual gearbox, both sourced from the Megane 275 Trophy R.

So that’s 271bhp and 265lb ft. We can’t tell you how quick this car actually is, though; it remains, officially, a concept, with no confirmed kerb weight. But if Renault Sport’s 1,200kg target has been met, then the RS16’s resulting 226bhp/tonne power-to-weight ratio should secure a 0-62mph time of around 5.5 seconds and a top speed north of 150mph.

Still a concept, you say?

Yes. The boring financial details are still being picked over, Renault tells us. That, and working out how limited-run production of the RS16 would squeeze onto the line at Dieppe, between the new Alpine sports car and the standard Clio RS.

But having met the small team behind this car – who worked secretly on this project over a five-month period – I’ll happily eat your hat, as well as my own, if they allow Renault to put the kibosh on bringing it to production.

Hands off my hat. Tell me what it’s like to drive.

It’s ace. But then giving a wee hatchback an oversized engine has been a recipe for riotous fun since the mk1 Golf GTI first arrived. Riotous fun which the Clio name has been inseparable from since a large 2.0-litre was squeeezed into the Clio Williams back in the early nineties.

Inseparable, that is, until the mk4 Clio RS landed, with its efficient, rather than effervescent turbo engine and its hesitant paddleshift gearbox. If the critical reaction to that car directly led Renault Sport to draw up this RS16, though, all can probably be forgiven. Here is a hatchback brim-full of charisma, and with enjoyment at the top of its agenda.

What makes it so good?

There’s essence of racecar imbued through it. This much as clear when you swing the door open, to be greeted by a lightweight bucket seat bearing a full harness. Behind you there are no seats, instead an empty space interrupted only by a small fire extinguisher. Always a sign things are getting serious.

While the Megane’s engine and gearbox have stayed in their original tune, an awful lot of concessions have been required elsewhere. You can read the full story here, but the most key changes involve tougher suspension components – including the rear setup from the Clio rally car – and the wheels and tyres from that Nürburgring-honed Megane Trophy R. Even some oily bits from the old, mk3 Clio RS – a high hot hatch watermark – have come along too.

The end product is a car that’s so sweetly balanced. Driving a one-off concept car with no traction or stability control systems on board ought to be as nerve-shredding as this job gets. And yet with so little weight or complication separating the car’s behaviour from your fingertips and feet, the RS16 proves an amiable companion on track. No need for caution. 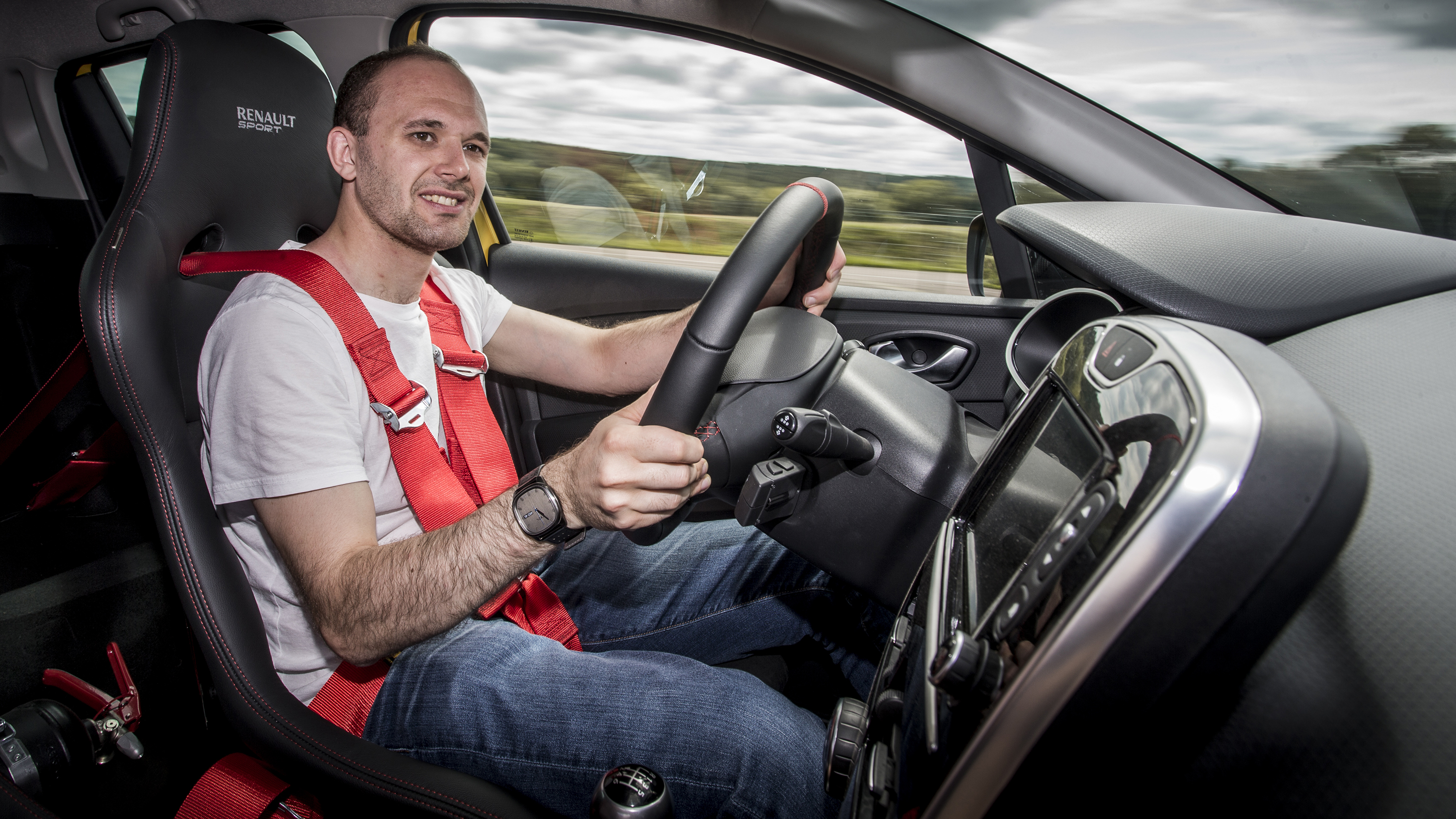 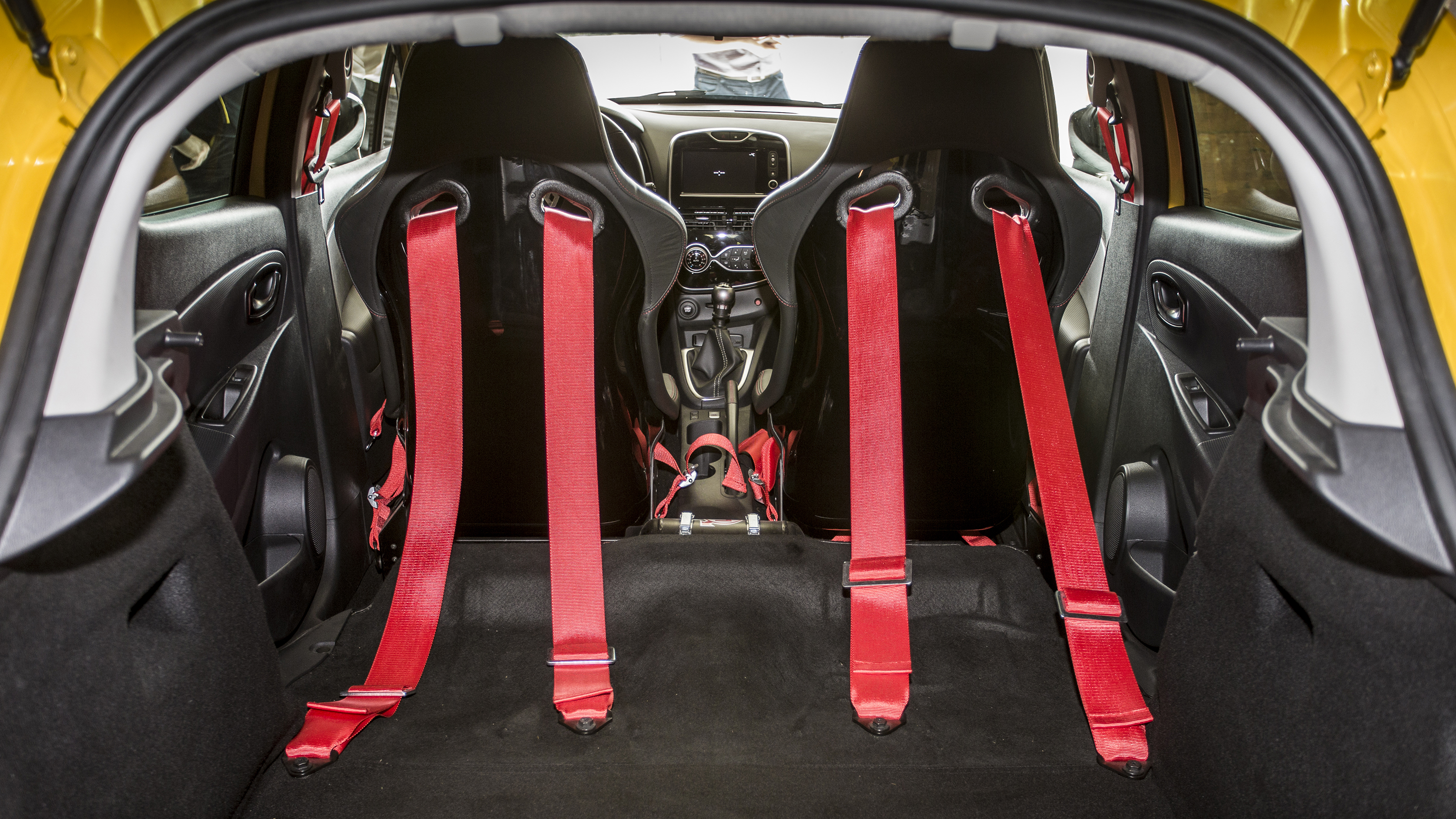 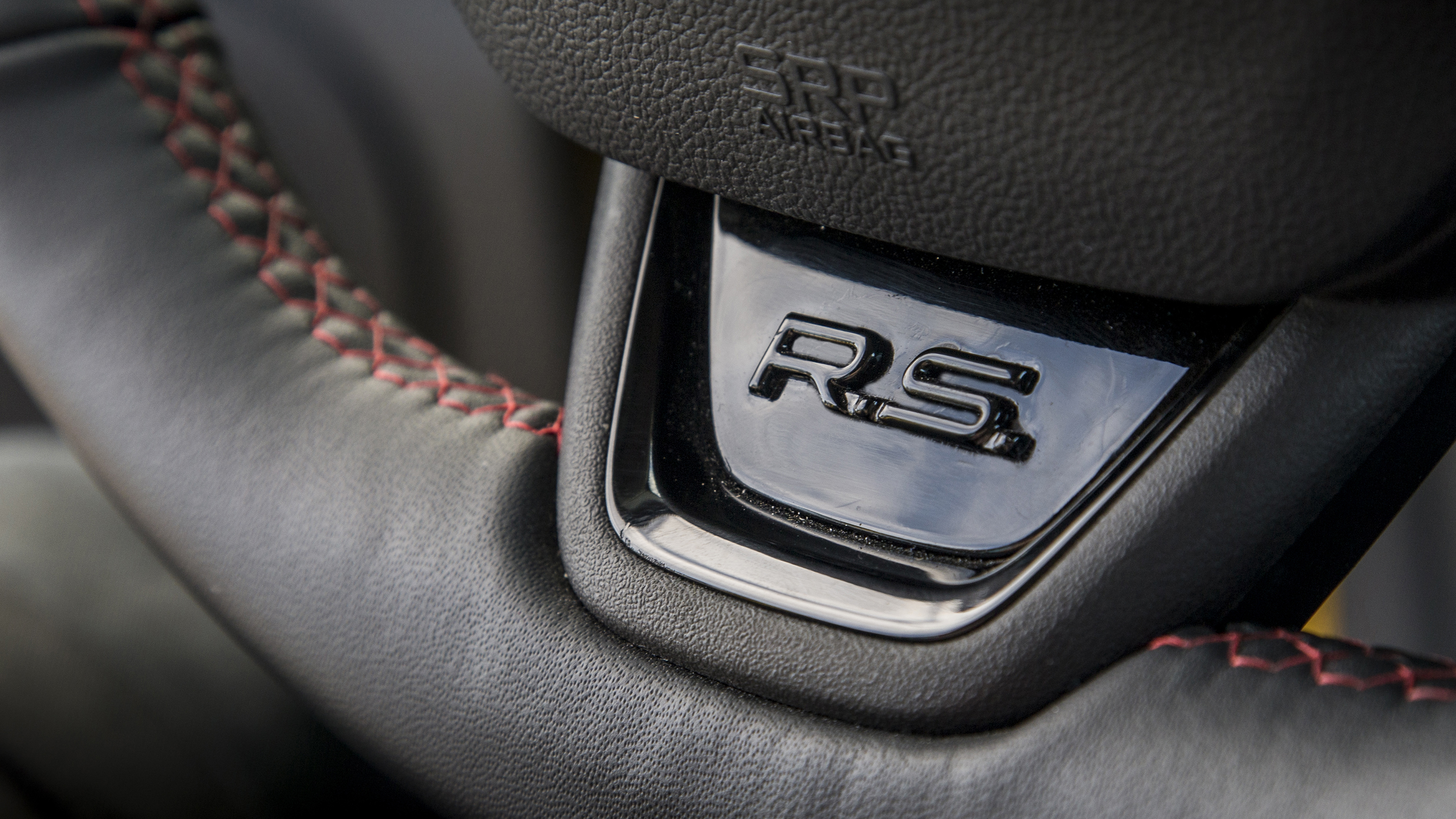 Not like those spiky Clio V6s of old, then?

Quite the opposite: the front-engined, front-wheel-drive RS16 beckons you to play with its balance, utilising its liveliness purely for a quick lap, or giving you the option to go looking for a sneaky little slide if you wish.

There’s no Focus RS-style powersliding heroics, rather the more natural, and arguably more rewarding feeling of extracting maximum agility from a chassis some enthusiasts will derogatively refer to as ‘wrong-wheel drive’. Give them half an hour on circuit in this, and they ought to change their mind.

And what about the engine?

The richness of its torque actually makes it pretty effortless, and you won’t need to rev this like fast, fun Clios of old. It’ll keep delivering if you do want to hunt down the red-line, though. The engine comes attached to an Akarapovic titanium exhaust, whose sound is accentuated by the cavernous, van-like rear space. It’s a raw, encompassing noise that will quicken your pulse rather than prickle your arm hair. But that only enhances the RS16’s racecar vibe.

And the gearbox? In truth, it probably isn’t one for the manual transmission hall of fame. Its throw could be shorter and given how special this car is, Renault should have appeased us geeks with an Alcantara-trimmed knob. But these are niggles: the very appearance of a stick-shift is good news. The involvement it adds warrants an inevitable deficit in laptimes. Here’s hoping it means Renault Sport still believes in manuals.

Surely there are bigger niggles?

If there are, we didn’t find them on a dry, warm track. But so lively is the RS16 under hard braking, and so keen to change its angle of attack in line with your throttle input, things may be sketchier in the wet. Should it make production, though, you can expect some electronic nannies to be added to the spec.

Oh, and with no back seats, and suspension we suspect may be quite firm on the road, one might argue this Clio plays fast and loose with the hot hatch useability rulebook. Anyone bothered by that probably stopped reading at the fire extinguisher, though.

Should I get saving, then?

We’d say so. Renault may not be certain the Clio RS16 will make production, but it has divulged some estimated numbers if it does. Namely 200-300 cars, being sold at around £35,000 each. The UK would likely get at least 10 per cent of the quota.

So five grand more than a Ford Focus RS. But that’s a mass-production, AWD family car. Here, you’d be buying a car cut from the same cloth as the old Clio V6, which remains an icon, a mini exotic.

Though not as special, the RS16 is better to drive; more approachable, less likely to harm you, and simply more fun to drive quickly, even without a sonorous V6 tucked just behind your ears. The hot hatch world will be a poorer place if Renault can’t make the sums work.