Read why you can trust our independent reviews
Jason Barlow
Published: 25 Sep 2013
comments
Skip 2 photos in the image carousel and continue reading 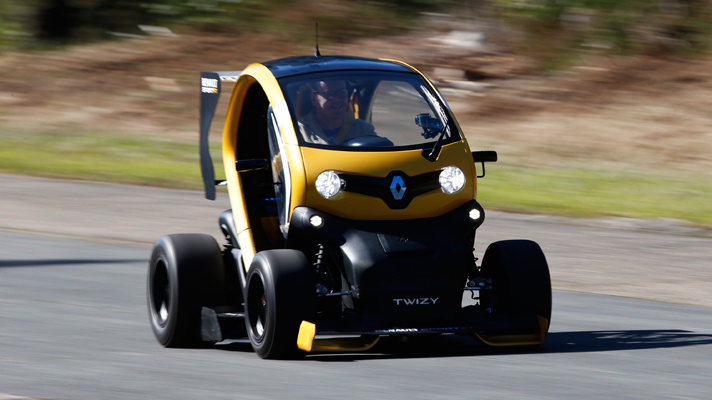 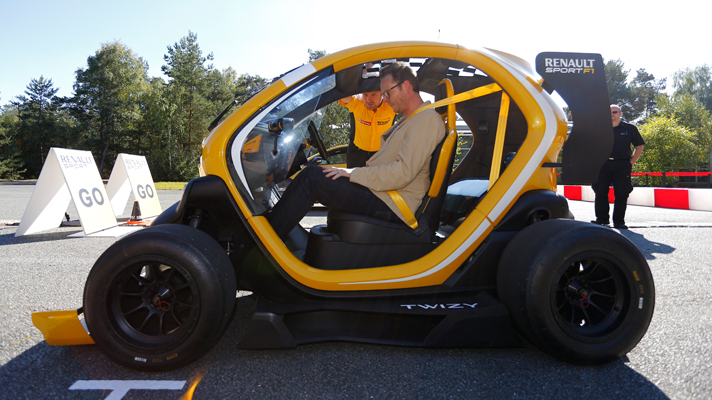 In 1995, Renault stuck an 800bhp version of their era-defining V10 Formula One engine into a Renault Espace body. Oh, those wacky French. There were a few centre-of-gravity issues, if we remember rightly, but as a headline-grabbing means of showing off, it sure did the trick.

These days, F1 is a different beast, and Renault the car maker isn't just on the electric car bandwagon, one of its zero emissions power units is propelling the damn thing. The French giant still provides the motive force for a third of the F1 grid, though, including the champions-elect Red Bull, and Lotus, so how best to square the circle? Enter the Twizy F1, a hot version of Renault's fantastic all-electric city car. Almost 100bhp hot, in fact.

This is all about KERS and that, as you know, stands for Kinetic Energy Recovery System. This clever box of tricks arrived in F1 in 2009 as a new, more environmentally friendly era dawned. Energy previously wasted during deceleration or braking could now be harvested, stored in batteries, then redeployed by the drivers in slugs of up to 60kW (roughly 80bhp), for around six seconds per lap on average.

The Twizy F1 is basically KERS on wheels, as RenaultSport F1's marketing operations manager Tarik Ait-Said explains. "A lot of the current technology transfer from F1 to road cars is invisible. We wanted to show how KERS, which still confuses some people, could be applied to a road car. What better way to showcase it than by harnessing it to an electric engine, in a purpose-built electric car?" The upshot is a Twizy capable of out-pacing a RenaultSport Megane 265 to 62mph. Now that's the sort of showcase TopGear.com likes.

The system consists of three main components: an electric motor generator unit (MGU), which is hooked up directly to a driveshaft, a KERS control unit (KCU), and a lithium ion battery pack. Lifted almost entirely from the Renault F1 engine - 2011 spec, to be specific - it boosts the regular Twizy's 13kW/17bhp power output to 72kW or approximately 97bhp. The extra power unit and batteries lifts the weight from 470kg to 564kg, though the power-to-weight ratio is obviously more promising.

Engineering an F1 battery-powered, twin-engined Twizy was not without its engineering challenges. For example, KERS cuts in seamlessly on an F1 car from around 60mph, rather than doing its thing from a standing start. That meant rewriting the software algorithms, and heavily revising the electronics. Smoothing out the power delivery also proved tricky; during initial test runs, the system had a habit of booting up before suddenly cutting out, as if unsure of its purpose shorn of the F1 remit. Fortunately, the standard Twizy chassis - developed by RenaultSport - was actually over-engineered, so it's good enough to cope with the extra grunt. The wheels come from the Formula Renault 2.0 single seater.

Packaging it all meant ditching the regular Twizy's rear seat. Tucked away under a Plexiglass screen is the 10cm-diameter cylinder that hides the main KERS motor, with the power control unit nestling close behind it, which converts the energy. This plus the additional battery pack generates a lot of heat, so there's extra visible plumbing here too, liquid cooling supplied via a set of blue pipes. There's a radiator, a pair of fans, and if you look closely you'll spot a sliver of grille in the rear bodywork. That's if you can tear yourself away from the front wing, rear diffuser and side pods, all of which have as much to do with aerodynamics as Ed Miliband, though they're more convincing.

More significant is the F1's specific gear-set, which has the challenging job of harnessing the two motors and ensuring that the Twizy F1 doesn't simply explode on the spot. The standard Twizy's electric motor usually spins at 7500rpm, though it can run as high as 10,000rpm. The KERS motor operates at an even more energetic 36,000rpm. A reducer gear ratio means they talk to each other harmoniously. The existing Twizy batteries and motor sit under the driver's seat, as usual.

The steering wheel is borrowed from the Formula Renault 3.5 single-seater, so it's not really a wheel at all and more of a portable directional computer. Twin LED displays in its centre show the level of charge in the main battery and the KERS, as well as oil pressure and water temperature. Two rotary knobs govern the car's ‘recovery' mode, siphoning off energy from the Twizy's main motor and storing it, and ‘boost' mode, which lets the driver theoretically redeploy it in 10kW increments up to a maximum of 60kW. Carbon fibre paddles sprout out of the steering column, and a little aluminium button to the right of what passes for a dashboard in a Twizy primes the system. Above that, the glovebox is now full of sockets and ports, having effectively become the car's communications centre.

Driving it is equal amounts ridiculous and utterly brilliant. The pumps are the first thing you hear, before the system itself emits a rising whistle sound that manages to be both sci-fi and Heath Robinson at the same time. Your senses tell you that the Twizy F1 should be vibrating with energy, and you can definitely feel something, but as it's all wrapped up in electrical voodoo it sort of hums. In fact, there's a good chance you could end up shooting upwards rather than forwards.

Renault Sport F1 has arranged a drag race between me in the Twizy F1, and a test driver armed with a Megane 265. Pull back on those carbon paddles and the KERS is engaged and good to go. Simply release the paddles and hang on. There's a beat, and then we rocket forward on a fabulous surge of instantly realised torque. There's absolutely no skill required, and for the first leg of the run we're definitively outpacing the Megane. He breaches the timing beam first, although my data logged 0-62mph time of 7.6 seconds is still pretty good. Perhaps if I'd avoided the lunchtime pie, I could have shaved a few tenths off...