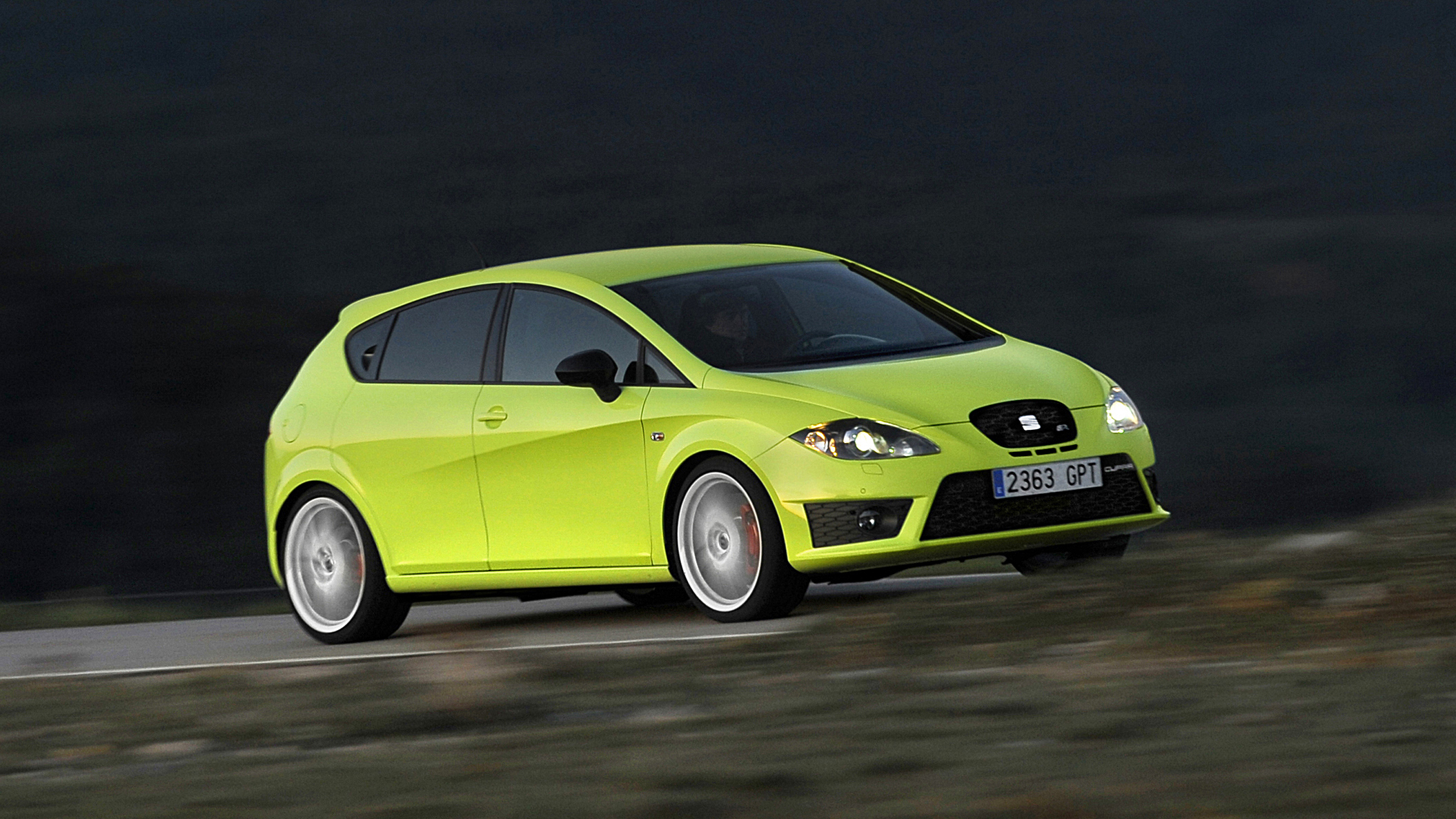 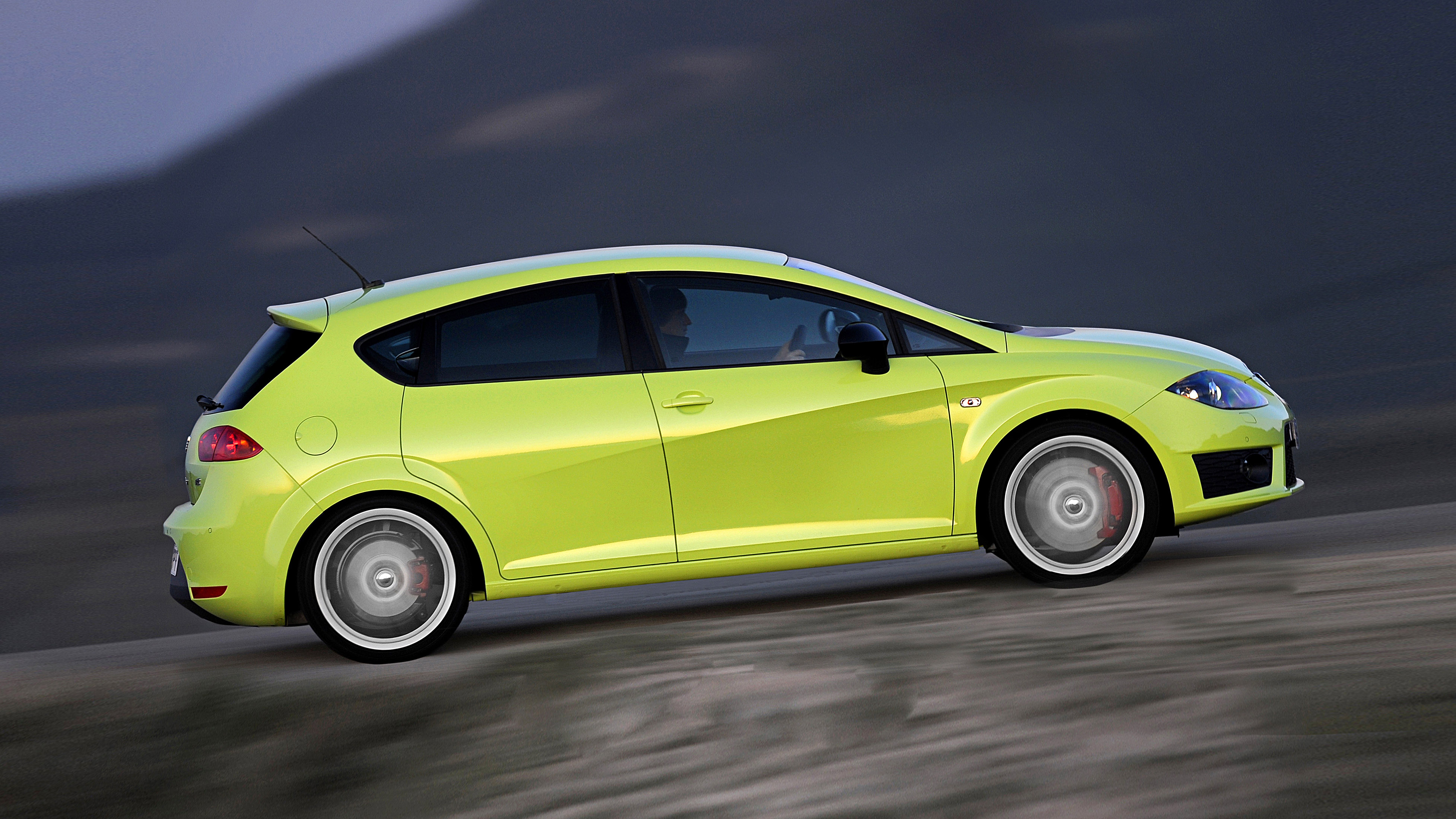 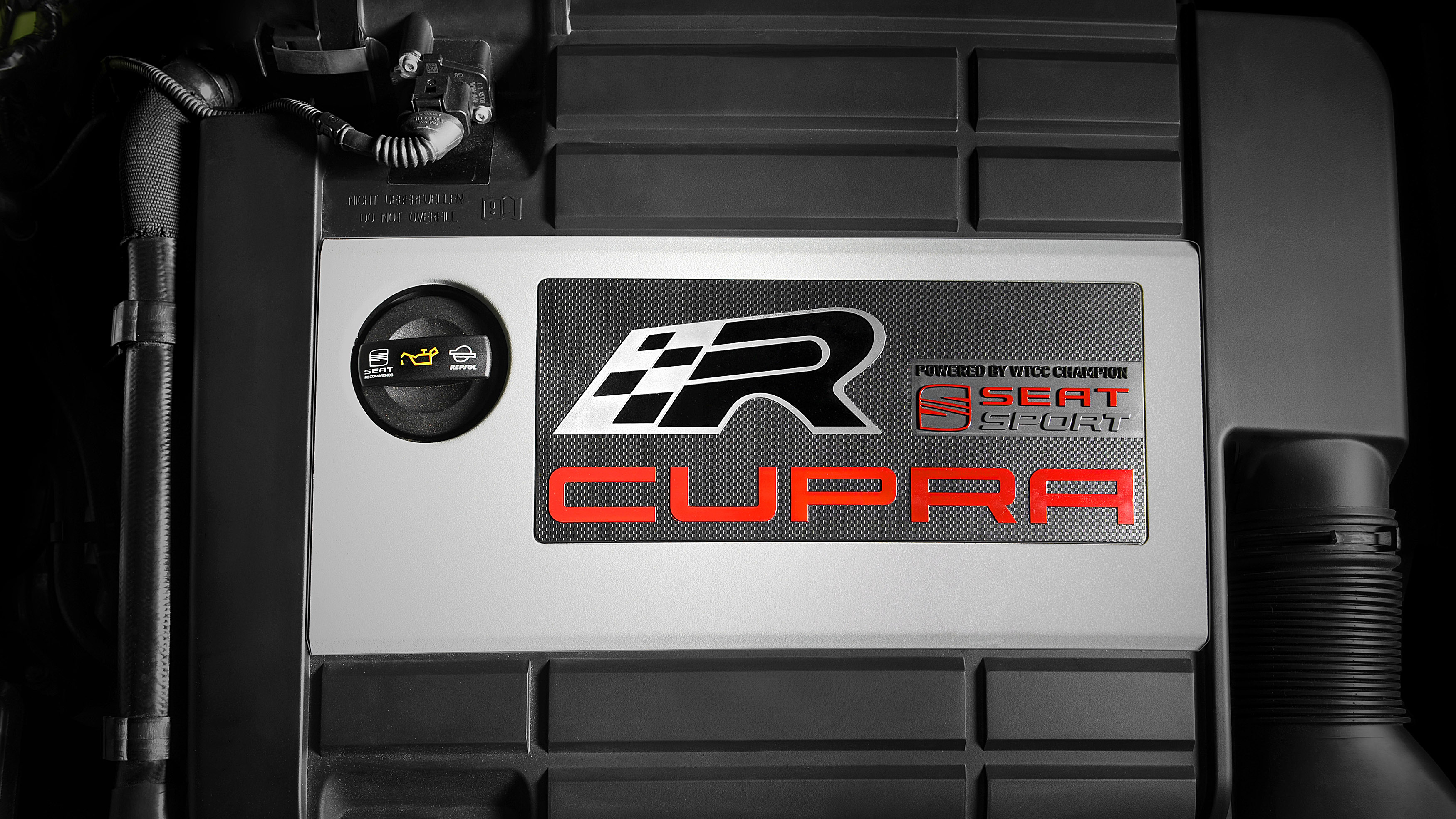 This Seat Leon Cupra R shouldn’t exist. Because when the lesser Leon Cupra was launched three years ago, Seat argued that 237bhp was more than enough power to make that car entertaining and therefore you shan’t be needing any more power through the front wheels, thank you very much.

But then Ford came along and spoiled the party. Or started it, depending on your point of view. The Focus RS had 300bhp and all of a sudden anything with less than 250bhp seemed a bit passé. Willy-waving ensued: if one make does it, the rest all feel obliged to follow. Fortunately, Seat is owned by Volkswagen and the Scirocco R has just been launched with an engine that’ll do nicely.

This is a 262bhp, 258lb ft, 2.0-litre turbocharged four cylinder motor – not quite on the same level as the RS, but with a price tag of about £23,000 (Seat will confirm the cost at the end of this year), the Cupra R is significantly cheaper.

It also pursues a similar ethos to the Focus, one of blunt power. The Cupra R gets the same unit as the Cupra, but with a bit of ECU tweaking and increased turbo pressure, power jumps to 262bhp. It’s certainly not slow: 0-62mph is quoted as 6.2 seconds and it feels every bit as quick. The Focus is only 0.3 seconds faster and on real-world journeys and real-world roads, you’ll never be able to tell the difference between the two. That 0.3 only counts for something when you’re playing Top Trumps.

In-gear acceleration is also impressive because the turbo comes on-song smoothly at 1,800rpm, so even when you’re trundling along at 70mph in sixth gear on the motorway, you never have to reach for fifth to get past middle-lane dawdlers. Seat seems to be aware of this, because it’s taken the bizarre decision to fit a change-up indicator in the Cupra R. No, this isn’t the normal hot-hatch ‘please change gear otherwise the engine will explode’ light, this is a change-up adviser to remind you that you really should be in a higher gear for the sake of economy. Odd in a hot hatch, even in one that manages a claimed 34.8mpg. Get the dealer to turn it off at the first service, I say.

Any suggestion of a Zen attitude is extinguished above 2,800rpm, with savage power delivery and a fantastic roar from the exhaust. Fortunately, the turbo induction noise doesn’t drown it out, so the car sounds purer and more mechanical than other hot hatches. And because the turbo is so flexible, it’s easy to drive fast everywhere. 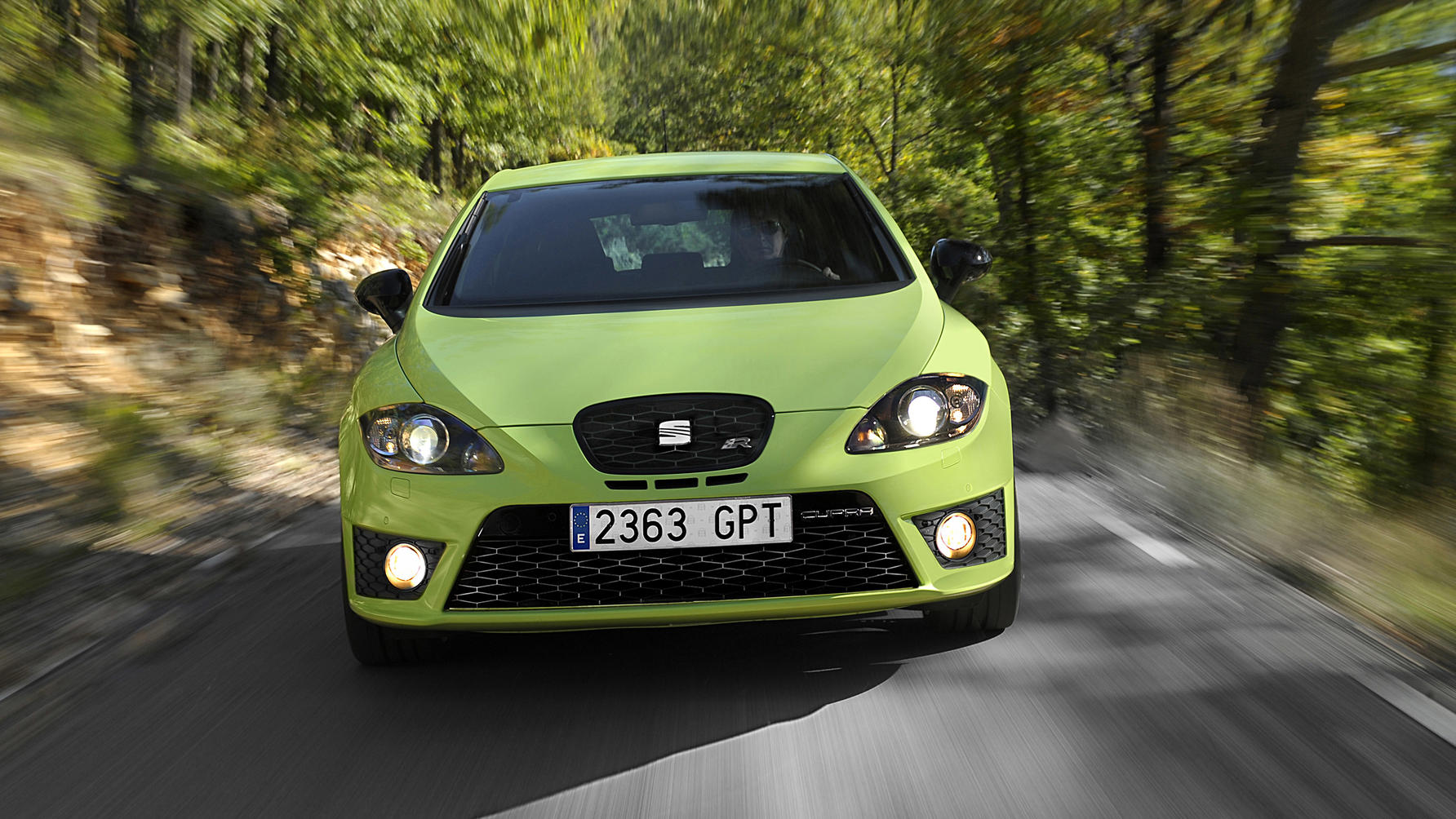 There’s so much grip on offer that understeer is never a worry. I drove it on soaking wet B-roads and never felt like I’d overdone it into a tight corner – turn in and the nose grabs the tarmac like a dog with a bone and won’t let go. There is an electronic substitute for a limited-slip diff on the front wheels rather than a mechanical device like in the Ford, but you can’t feel it working.

On the one hand, that’s good. It operates by applying the brake to the wheel with less grip, so if you could feel it that would be a bit unnerving as the brakes would be constantly snatching. But equally, I’d like a bit more adjustability – I’d like to feel an LSD dragging the nose back in if I apply more power. You pick a line through a corner in the Cupra R and that’s the line it will follow. There’s no adjustment possible mid-bend and the blunt throttle doesn’t help.

Grip is impressive, but it’s not as much fun as other cars in the class. A bit of adjustability is good because it lets you feel the car pivot around you, as though you’re at the centre of its universe, integral to the way it’s working through corners. In the Cupra R, you get the impression that you’re sat on top of the car, not in it and it doesn’t draw you in as much as the Focus RS. The RS bear-hugs you, the Cupra R politely shakes you by the hand.

There’s nothing wrong with the steering, or the body control. Both are tight and precise, and the steering is mighty impressive for its general lack of torque steer. Even on those streaming B-roads, it never once jumped and kicked in my hands under full acceleration, not without being provoked. But the suspension could do with a bit more compliance. It’s stiffer than the Cupra all round – 35 per cent harder front, 30 per cent rear – and you really feel it around town and on the motorway. It never settles and is constantly chattering away over small bumps. You rarely sit still in your seat because the Cupra R is constantly fidgeting and all that movement is transmitted straight through to your arse. It doesn’t bounce around in a crazy fashion on a B-road and feels well controlled – you never get the impression that it’ll skip off one bump and into the nearest hedge. So it’s stiff, alright, and if you like stiff, then that’s OK.

Cosmetically, the Cupra R is very similar to the ordinary Leon Cupra, but with a couple of discreet R badges on the nose and boot. There’s nothing dramatic about the Seat. The R has got enough road presence, but it’s certainly not as overtly lairy as the Focus RS: no enormous wings here.

Inside you’ll find the usual sporty seats, plus a leather steering wheel with an Audi RS4-style flat bottom, which is plastic but looks OK. Trouble is, the build quality is shonky – there are crude join lines all over it and sadly the rest of the cabin isn’t much better. Looks good, feels a bit flimsy. The aircon controls feel like they’ll come off in your hand, they’re so light and twirly. Still, at least the new satnav (optional at roughly £775) works well and an iPod integrates really beautifully with all the stereo controls and the nav screen.

But the interior isn’t why the Cupra R doesn’t score higher. It all comes down to the chassis. This prevents the R getting anything better than 13/20 because the car sits awkwardly between two schools of hot hatch thought. It’s not as adjustable or lairy as the Focus, or as comfortable as the Golf GTI. It’s good value for money at about £23K, and it looks great on paper, but it’s not as brilliant an all-round as it should be. That won’t put off Seat devotees who crave the power and love the styling and will be placing orders at dealers next January. But we think it could – and should – be better.

Verdict: Cupra R gets close to the best in class but a poor ride lets it down. What an incredible engine it’s got though.