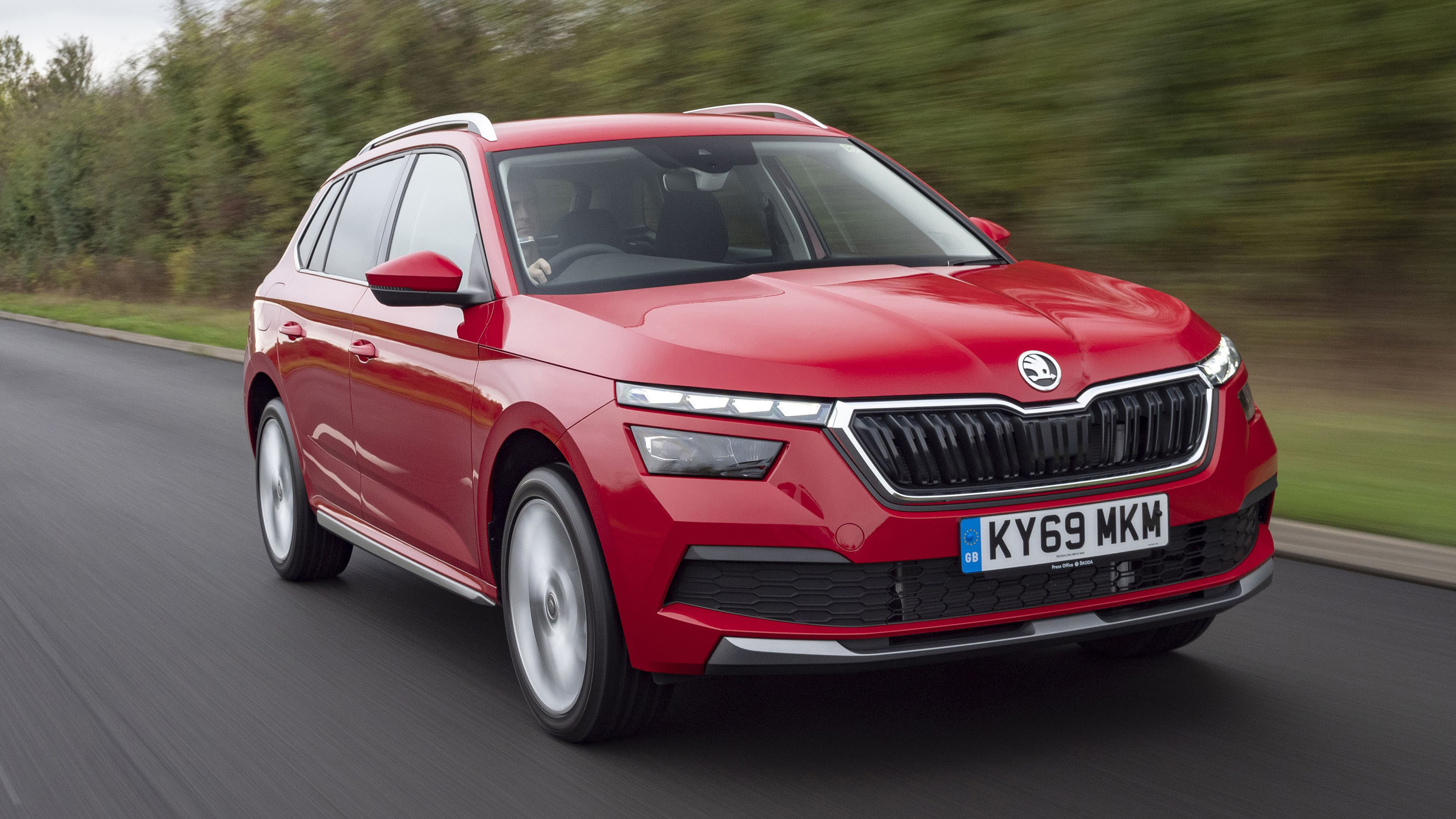 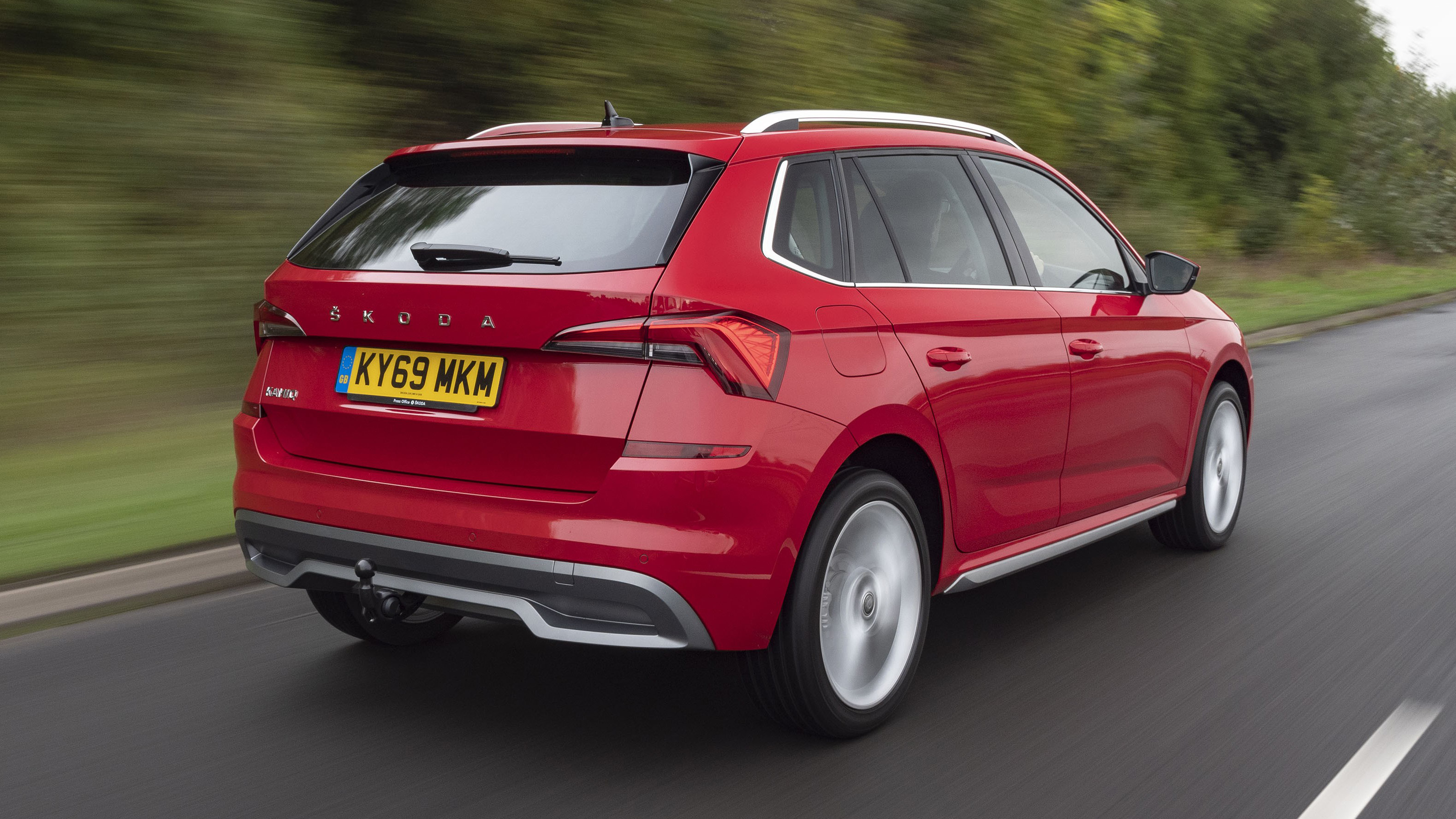 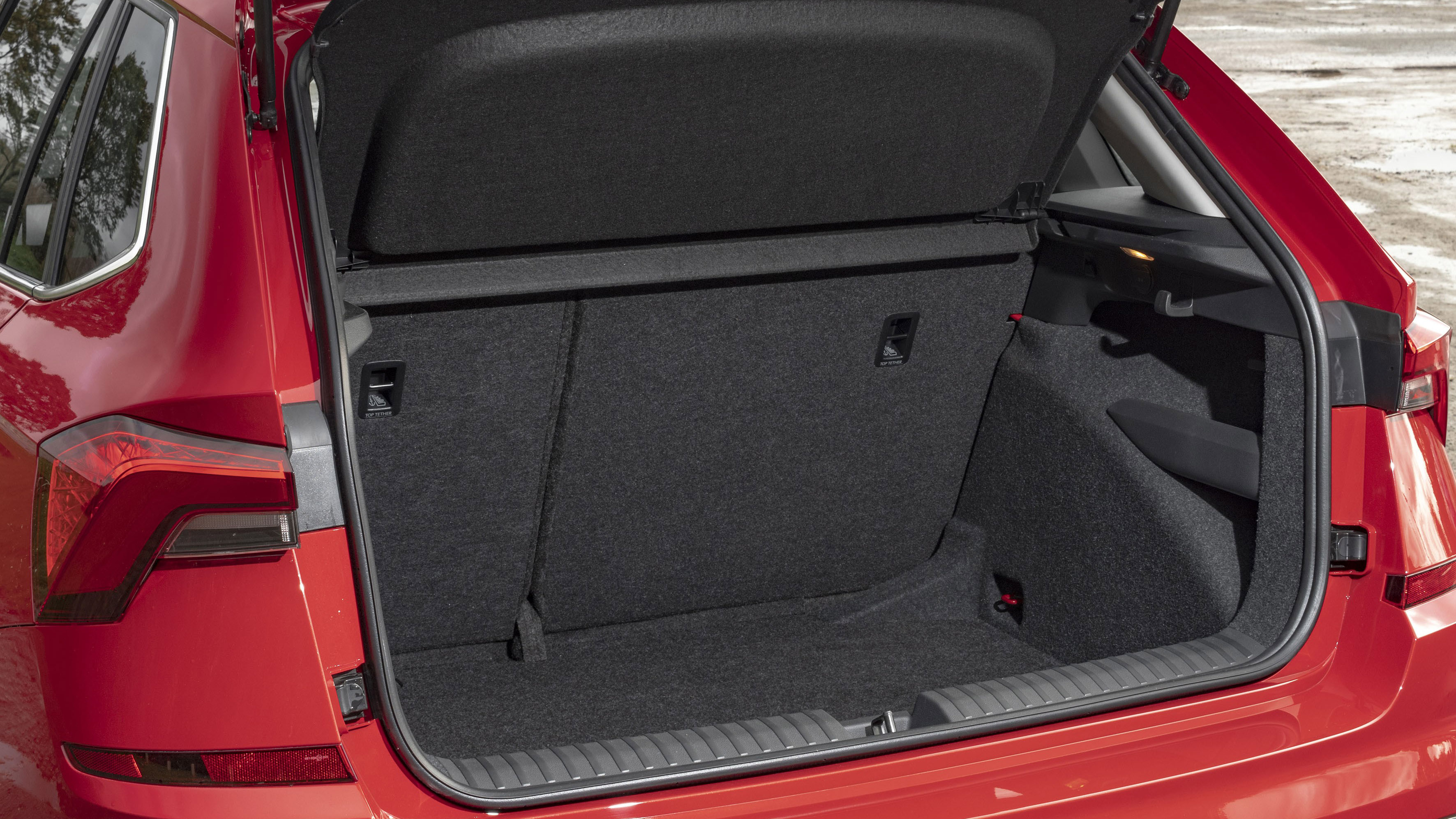 Wait, which VW group crossover have you been testing this week?

The Skoda Kamiq, tested here for the first time on UK roads. The Kamiq, of course, is Skoda’s smallest SUV/crossover thing, sitting below the slightly bigger Karoq and quite a bit bigger Kodiaq. That puts it in line with VW’s own T-Cross and Seat’s Arona within the wider family, whilst external competition comes from fellow crossovers like the Hyundai Kona, the Mazda CX-3 and the Toyota C-HR.

The segment may be relatively new, but the popularity of small crossovers means it’s packed to the rafters with competition already.

Hit us with your first impressions then.

Well, credit where credit’s due, the Kamiq looks half decent. Its chunky features and boxy styling give it a proper big-boy SUV look, whereas others have more of a supermini-on-stilts vibe. The Velvet Red paint you see above is an expensive option at £975, but brighter colours certainly seem to suit it better.

The angry LED headlights might not be to everyone’s taste, but at least they separate the Kamiq from its similar-looking bigger brothers. Other than that, there aren’t too many distinctive features – Skoda has clearly prioritised practicality, which some of its rivals eschew in favour of some added style.

It’s... it's fine. Skoda knows that buyers won’t be judging the Kamiq on the way it drives – they’ll care more about the impressive rear legroom and the cavernous 400-litre boot – so it has done just enough to make things pleasant.

We drove a top-spec SE L car fitted with the 1.0-litre turbo three-cylinder in its 113bhp form (you can also have it with 94bhp) and a six-speed manual gearbox. The engine itself is impressively quiet, especially at motorway speeds, but it’s certainly not quick and there’s a sense that upgrading to the more powerful 1.5-litre petrol would be worth the small outlay if you often travel with a full car.

The gearbox is slick enough to use, though, and the steering is light and direct. Body roll is kept to a minimum, but the standard 18-inch wheels on the SE L do make things a little crashy on the UK's potholed winter roads. At £495, the optional Sport Chassis Control with its sport mode is definitely worth avoiding. You’ll never use it.

You get the impression that Skoda has kept things pretty sparse in here so as to not impinge on the Karoq’s sales. The Kamiq has so much room inside that if it was any plusher, there really wouldn’t be a need to choose the middle child.

Saying that, the Kamiq’s cloth seats are perfectly comfy and the 9.2-inch touchscreen on the SE L model is responsive. In top-spec trim you’ll also get digital dials which offer a hefty amount of information and can be displayed in a number of different ways. Plus, there are separate controls for the air conditioning which is a huge mark in the Kamiq’s favour.

Our test car was fully-loaded with £5,800 of options, including front and rear parking sensors, a rear-view parking camera and a panoramic sunroof, but heated and electronically-adjustable seats would be a welcome addition.

A word of warning too: the optional (£50) silver insert on the dash + bright sunlight and the aforementioned sunroof = serious reflective glare.

Looking at the figures, it’d definitely be worth considering the bigger petrol engine. The 1.0-litre managed around 44mpg for us on a combined motorway/town run, but the 1.5-litre four-cylinder makes an extra 35bhp, costs less than £1,000 more and actually emits 3g/km less CO2.

As an overall package the Kamiq is certainly fit for purpose. If you need something practical, safe and hard-wearing, we wouldn’t have any qualms about recommending it… if you’re in the market for a small crossover that is. Although who are we kidding? Of course you are.