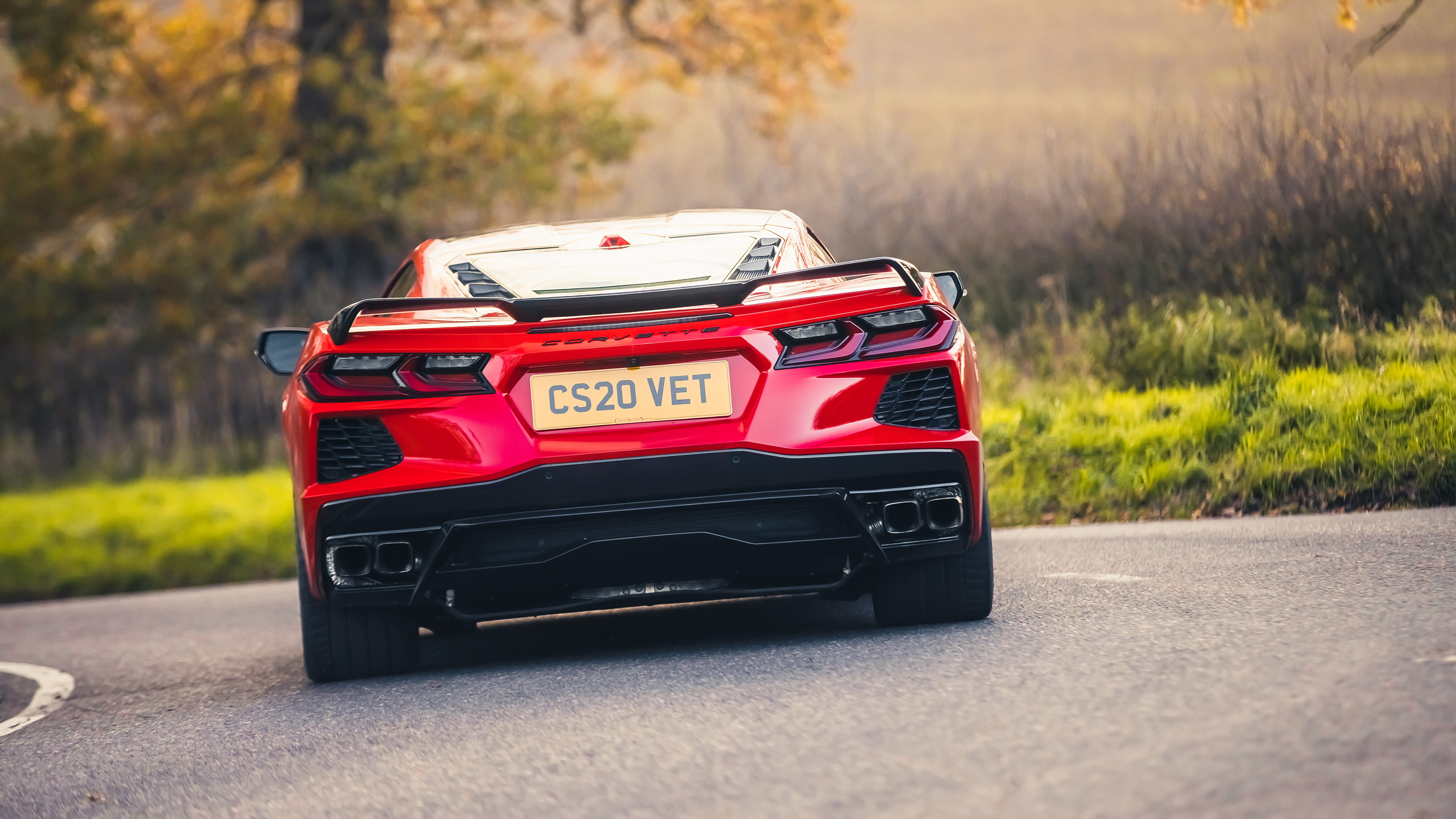 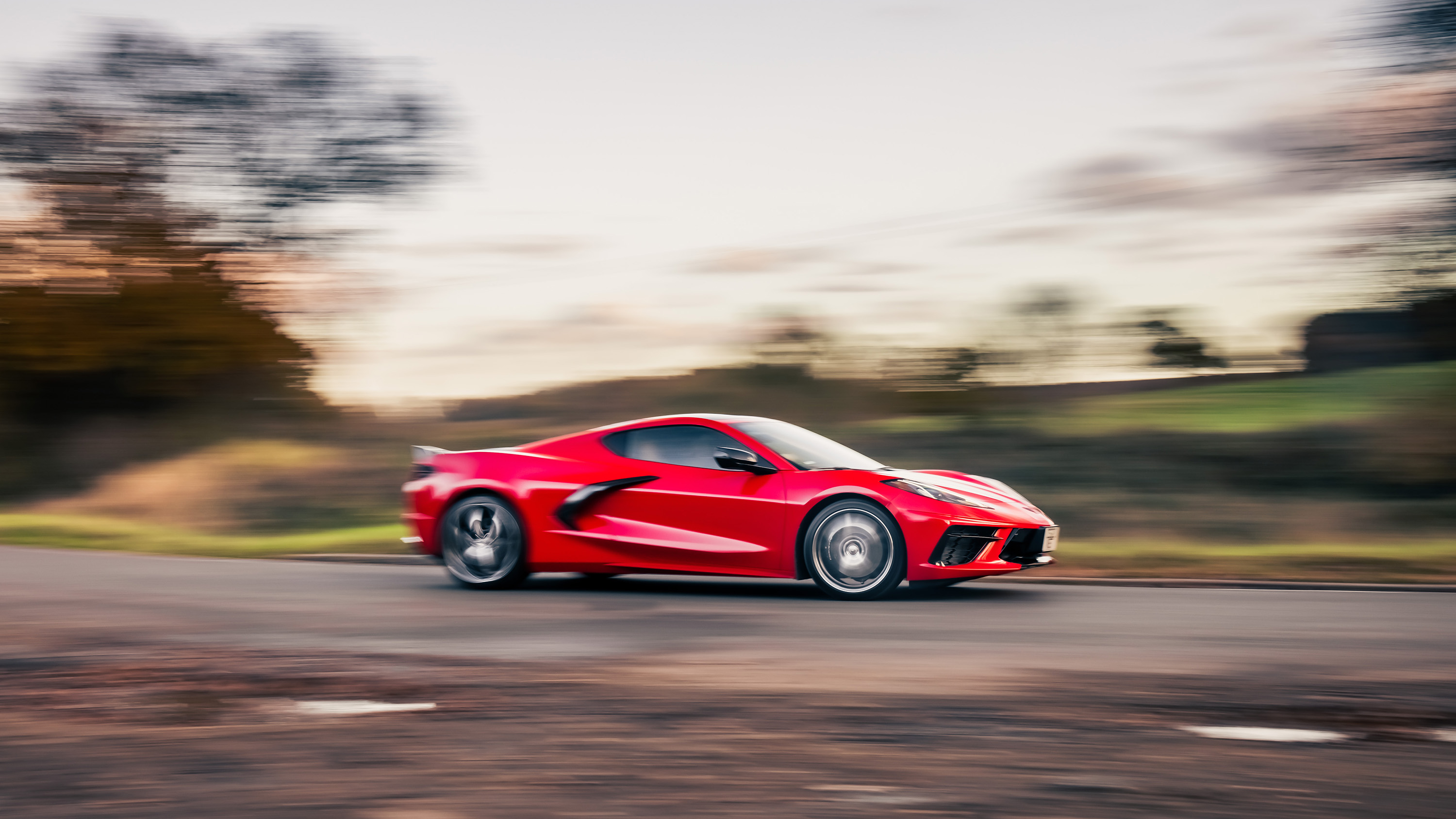 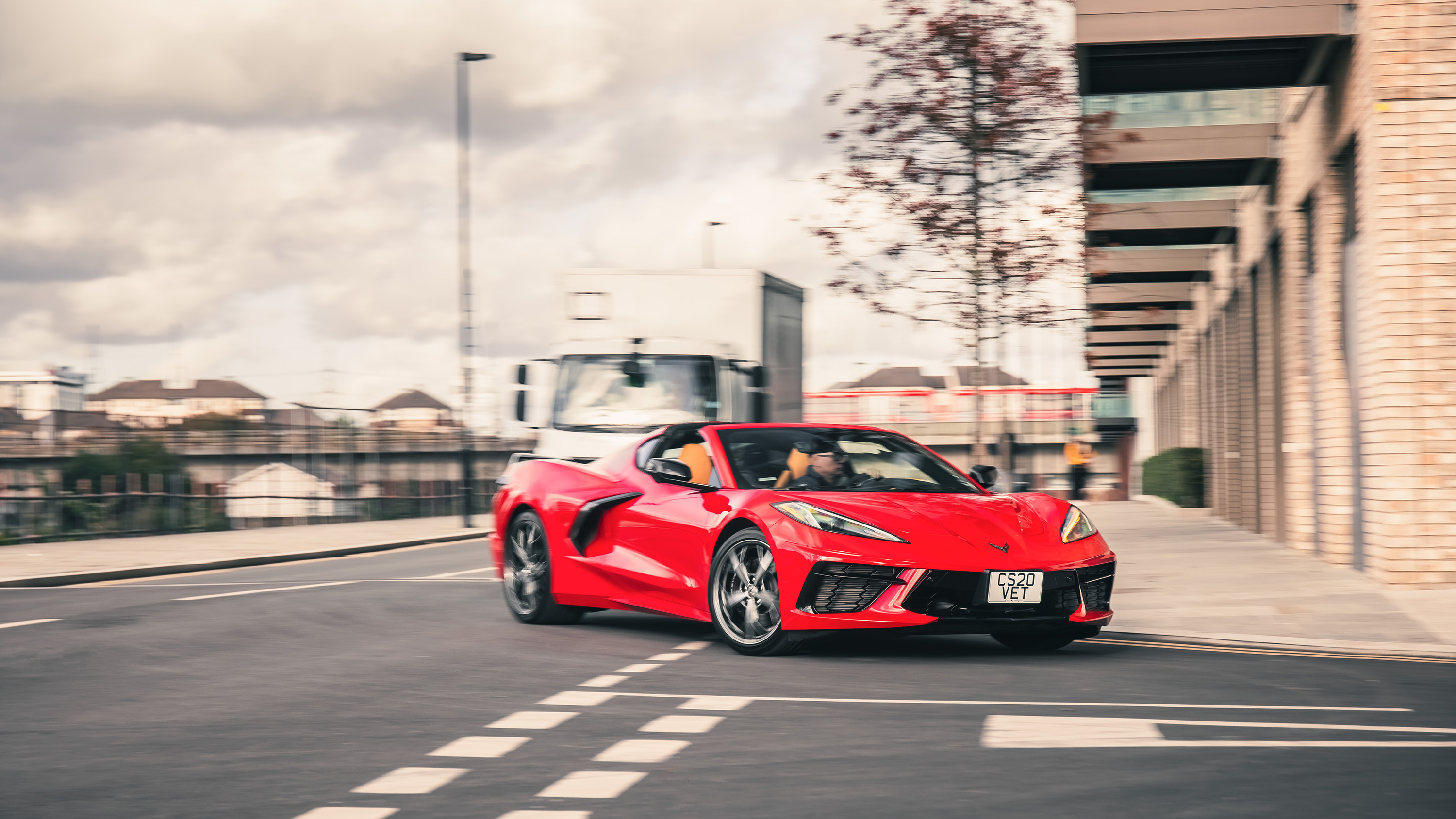 Is this a good reason for a quick UK-US trade deal?

Hey, keep politics out of Top Gear. Besides, it's not the machinations of the WTO or Brexit that have kept the Corvette out of the UK so far.

Nope, the obstacles are General Motors' own. It has never made the Corvette in right-hand drive. And frankly it wasn't a very UK-friendly car in other ways.

Now things are different. This is the new mid-engined, eighth-generation Corvette. It was designed to compete with European supercars. And GM still says the Vette will be available in the UK from late 2021, with a highly specced Z51 package. Crucially, it will have the steering wheel on the right side.

In the meantime, the first left-hand-drive example has been brought here by London dealer Clive Sutton. It too is in Z51 spec. Compared with America's base-spec Stingray, the Z51 pack means better tyres and brakes, a sophisticated limited-slip diff and other tasty bits of sporting engineering. It also has the optional adaptive dampers that official cars will get. And we’ve driven it.

That's a relevant question. Up to now, the Corvette hasn't travelled well. I've driven several generations and specs of Corvettes in the US. They all felt pretty fine over there. Then they landed in the UK and… didn't. But, spoiler alert, this new one… did.

What's the C8 all about?

I'll keep this brief. A sophisticated cast-and-sheet aluminium backbone structure carries glassfibre panels. The engine is an all-aluminium naturally aspirated V8, pushing through an eight-speed twin-clutch transmission. The suspension is aluminium too.

So it's light-ish: about 1,600kg with fluids. That V8 is a 6.2-litre pushrod job with variable timing on its camshaft so there's no shortage of torque: 470lb ft. But a pushrod valvetrain doesn’t like big revs, so max power of 495bhp is at just 6,450rpm.

Don't Corvettes have to be useable, too?

Yes. So it has decent boots in the back and front. The roof panel (optionally carbonfibre in this car) pops easily out and stores in the back. They designed the structure so that the sills are low, making it easy to get in and out.

The nose lifts hydraulically for ramps and speedbumps. This is linked to the sat nav, so if you store locations, it will rise automatically next time you're there. There's head-up display, heated and vented seats, wireless phone charging, CarPlay, all-round parking cameras and blind-spot sensors and a Bose stereo.

And of course the small-block V8 is related to the engines that power a squillion American pick-ups. So it's a whole lot easier and less demanding to service than a quad-cam Italian screamer.

Does it carry the supercar swagger?

While we were photographing it, several serious petrolheads walked and drove by, and they were unanimously impressed. It's a sharp-cut design, more NSX than Ferrari. But stare for longer and it's like the designers had no confidence in themselves. By way of compensation they kept adding more and more creases. If you take a lateral cross-section just aft of the headlamps, the body has 13 longitudinal lines.

Inside it's busy, too. Still, it combines usability with drama, and that's what's needed. The quality of the leather, plastics, switches and screens is all it needs to be.

Six point two litres then. How does that go?

Consistently, and persistently. Press the throttle, a little or a lot, and you get what you were expecting. That's super-satisfying.

But it's not brutal. This is performance you can use, in its entirety, on the road. Give it full throttle, hear – feel – the noise, and enjoy holding it there. It's not like the performance of today's full-on supercars, where all you can do is dip your toe right down, as if dipping into boiling water, then withdraw.

The throttle response isn't super-sharp. Not like an electric motor. But it's sharper than turbos. So it's a cinch to drive smoothly, and to balance the car in a corner by deploying exactly the power you want.

The transmission can get a little indecisive in choosing its gears, but it's always smooth. Mostly I just used the paddles. It's super-attentive to them.

American manufacturers don't quote performance figures. The magazines over there use 0-60mph, with a one-foot 'rollout' - in other words the clock doesn't start until the car's well underway. They tend to get 0-60 times in the 3.3-second ballpark for the Corvette, and about the same for a base-model 911. The way we test cars, a 911 gets 0-62mph just under 4.0sec. So you can assume similar for the Corvette.

But to be honest this car didn't feel that quick. It could have been tight, mind, because it was brand new and had few miles on it. So I didn't want to be unsympathetic by repeatedly revving it out.

It sounds pretty cultured, without the hammering yowl of say the old front-engined Z06 or ZR1. In fact it's surprisingly quiet going gently, so you don't feel like a yob. But there are variable flaps in the silencer, so changing modes will find it a bit more voice.

Yeah, yeah, 'Vettes have always done well on V8 charisma. It's the handling and steering where they came unstuck over here.

Quite. And here the C8 departs from the script. It no longer suffers from over-quick steering, and it isn't knocked off course by bumps. This is a chassis that feels right at home down your British road.

The steering is direct and you're sitting near the front wheels. It's not lazy. But critically it isn't nervous either. Early US reports mention understeer, but they're emphasising track driving. On a road, it gives you a sense of how much grip you've got. Then, leaning on the wonderfully progressive throttle, you can just balance it via the rear tyres, letting the electronically controlled diff do its stuff. That part, at road speeds, happens very satisfyingly, and the traction control allows a bit of oversteer.

Look, it doesn't have the transcendent communication of an Alpine A110 or Lotus Exige or McLaren 570S, but it's still a car that left me feeling relaxed and confident as well as excited. That's never happened to me before in a Corvette in Britain.

But you're making it sound like a GT not a supercar.

The springs are fairly supple, and the adaptive dampers allow them to breathe. That's part of the reason it's so well-composed on a B-road – it's not slowed down by the bumps and dips. Wind up through the modes and it tautens and sharpens, but even 'sport' and sometimes 'track' are still relevant if the road is smoother. Remember, LHD cars always face a ride handicap because you're sitting above the broken edge of the road.

For dual-carriageways or busy roads, stick it in 'tour' and the powertrain eases off, the ride's relaxed, the tyres don't roar or slap. Yes, this a car you'd be happy to do big miles in.

Over here it's different. The 911 is £83k including tax but plus options. We're promised the RHD Corvette will be £81,700 for the fully loaded Launch Edition coupe. Whether GM manages to stick with that when the car finally lands here towards the end of 2021 is up for debate and likely to come after various trade and Brexit negotiations, plus any more Covid-related hiccups. So it matches the base 911 but hugely undercuts the other mid-engined mass-maker exotics, the Honda NSX and Audi R8.

That makes some kind of sense. The Corvette doesn't have quite the same blissful precision as the 911, but it does come with some great spec, and a really pretty impressive set of road manners. Oh and did we mention the naturally aspirated V8?

Clive Sutton's example has even more spec, including the carbonfibre roof and engine decor, and a nose lift, taking it towards being a $100k car in the US. It's for sale at £132,000, reflecting the amount of effort and cost incurred by bringing a car across from the US - not only the 10 per cent import duty and 20 per cent VAT, but the expense of putting the car through an IVA test in order to register it in the UK.

Beyond that, the price is further offset by the US's Manufacturer's Suggested Retail Price (MSRP). Suggested, not necessarily actual. The Corvette is new and popular, says Sutton, so US dealers are marking them up and selling them for well over list. Still, people will pay to jump the queue for rare sports cars (especially if, as reported, RHD 'Vettes are delayed). And in this case whoever buys it will be getting a good one too.