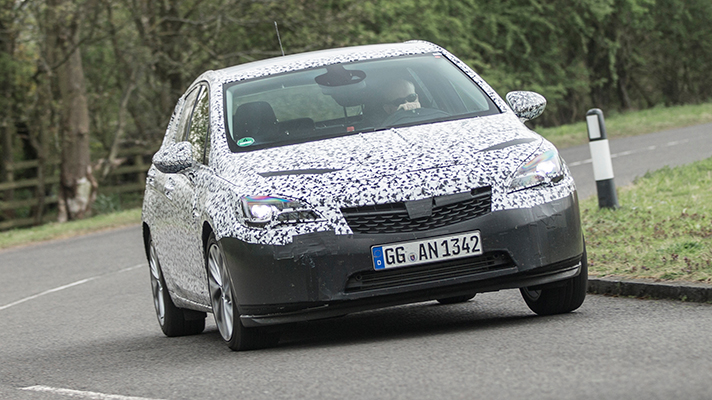 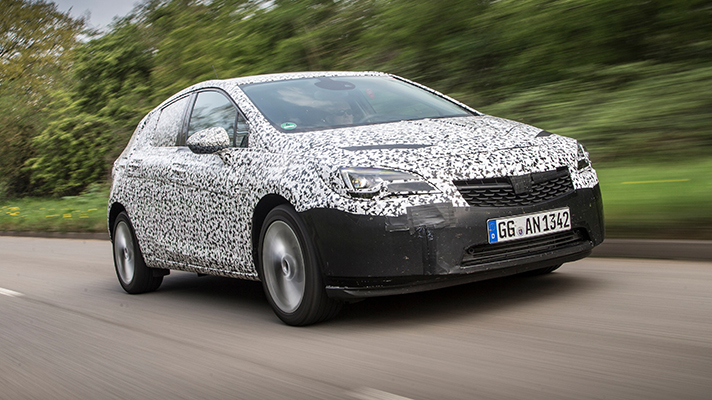 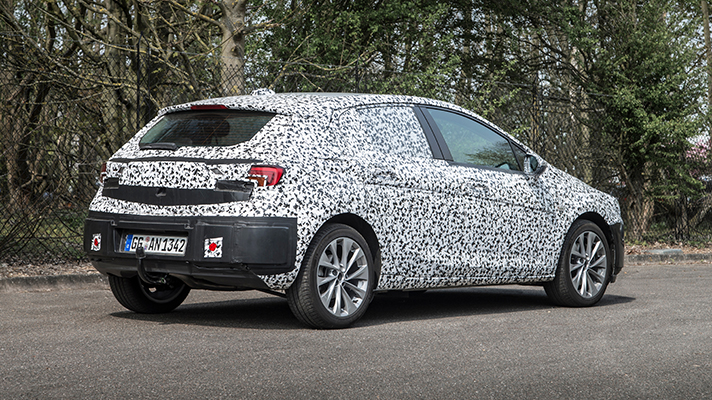 You know perfectly well because you've clicked on the title of the page. But see this thing on the road and you might not guess it's the new Astra. It's smaller than the current one and better proportioned. We'll see actual images of it on June 10.

Did you say smaller?

Custom and practice across the car industry is for each generation of any given model to grow. But the current Astra went too far, and is longer and heavier than the class norm. Vauxhall and Opel are taking an axe to it.

Yes. The new car is 49mm shorter than before, but only 23mm shorter in the wheelbase. And it's lower. But they managed to find more cabin room. It's more than class-competitive in the back seat. All versions are at least 120kg less. Actually if you go for the top-spec diesel auto you'll save a whopping 200kg, because they've replaced a heavy 2.0 biturbo diesel with a lighter 1.6.

I drove a couple of prototypes, heavily disguised on the outside and over the dashboard. But the engineers said they perform to spec, and I was driving on roads I know well in Bedfordshire. Vauxhall also brought along a current Astra (not a bad car at all) for comparison.

Right from the off, the weight loss transforms the car. There's an all-new 1.4 turbo engine replacing the current 1.4T. At 145bhp, it makes 5bhp more than the old one. But it feels like 25 extra, because the car squirts ahead with notable conviction at all parts of the rev dial. It's a quiet and refined engine too if a not especially tuneful one. While no firm figures are available yet, apply that minimum 120kg weight loss to the old 1.4 and we're now looking at a 1240kg car, around 85kg skinnier than an equivalent Focus.

Surely the Astra now seems light and tinny, though?

Light, certainly. In no time at all you notice the newfound eagerness into tight corners, and if you push hard you find an impressive resistance to understeer. The steering is progressive and manages a bit of feel. It's well planted, not showing the lightweight wobbliness of, say, a Citroen C4 Cactus.

The ride is taut and has a fairly high natural frequency but it softens things off well enough and has enough travel to do a good job over big bad bumps. Much like a Focus really. The tyres and suspension are quiet too. Wind noise is also low, which is a surprise given the amount of extra cladding the car is wearing today. Bodes well for the production machine.

How did they do it?

This Astra's platform is basically all new. It's made predominately of advanced steel, helping weight and strength. And smallness helps cut weight too. But there's more. They examined many details of the package to make sure there was enough room inside while paring away the kilos. It's all about fitness for purpose. For instance, under the bonnet they made no provision for that bulky 2.0 biturbo diesel, nor for the 'HiPer' strut suspension used on the VXR (the current three-door VXR isn't that old, and lives on).

They didn't have to put in reinforcing girders and strong chassis parts for the Zafira, because the Zafira replacement will instead be on a Peugeot platform. And there's no bracing for a cabrio version, because there'll be no new Cascada on this platform either. Nor a crossover.

So the max wheel size is down, and many of the chassis parts lighter, including the brakes which are smaller - on this light car they feel perfectly adequate to me. The rear seat has a simple folding action. The base of the windscreen pillar moves backward, saving the complexity of a window ahead of the door, and actually improving visibility.

Just two bodies will be offered, the hatch and the estate. The engine range is modern. Elderly power units have been a problem with the current Astra. The new one will have nothing more than two years old under the bonnet.

There'll be the brilliant little 1.0 three-cylinder from the Corsa with 95bhp, the related 1.4 tested here, and 1.6 petrols up to 200bhp. All diesels are from a new family of 1.6s. I tried one of those in another prototype, a 136bhp job, and it really is very civilised too.

Adaptive intelligent LED headlights are on the options list, a brilliant (pun intended) piece of kit that's unique in this class. And Vauxhall will be rolling out its OnStar connected concierge service across all models.

I used to drive an Astra...

You're not alone. This is the seventh generation, and Vauxhall calculates that a quarter of today's British drivers have owned one or had one as a company car. The first generation (also sold in the UK as an Opel Kadett, fact fans) was more than competitive against rivals like the - gag - Allegro and Escort.

But by the time of the second and third it was a pretty shoddy drive versus the improved competition. It clawed its way back to average and then pretty good, but maybe this is the one that finally tackles the Focus and Golf head-on. We'll need more miles, and a good look at the styling and interior quality before were anywhere near a judgment on that. But early signs are positive.