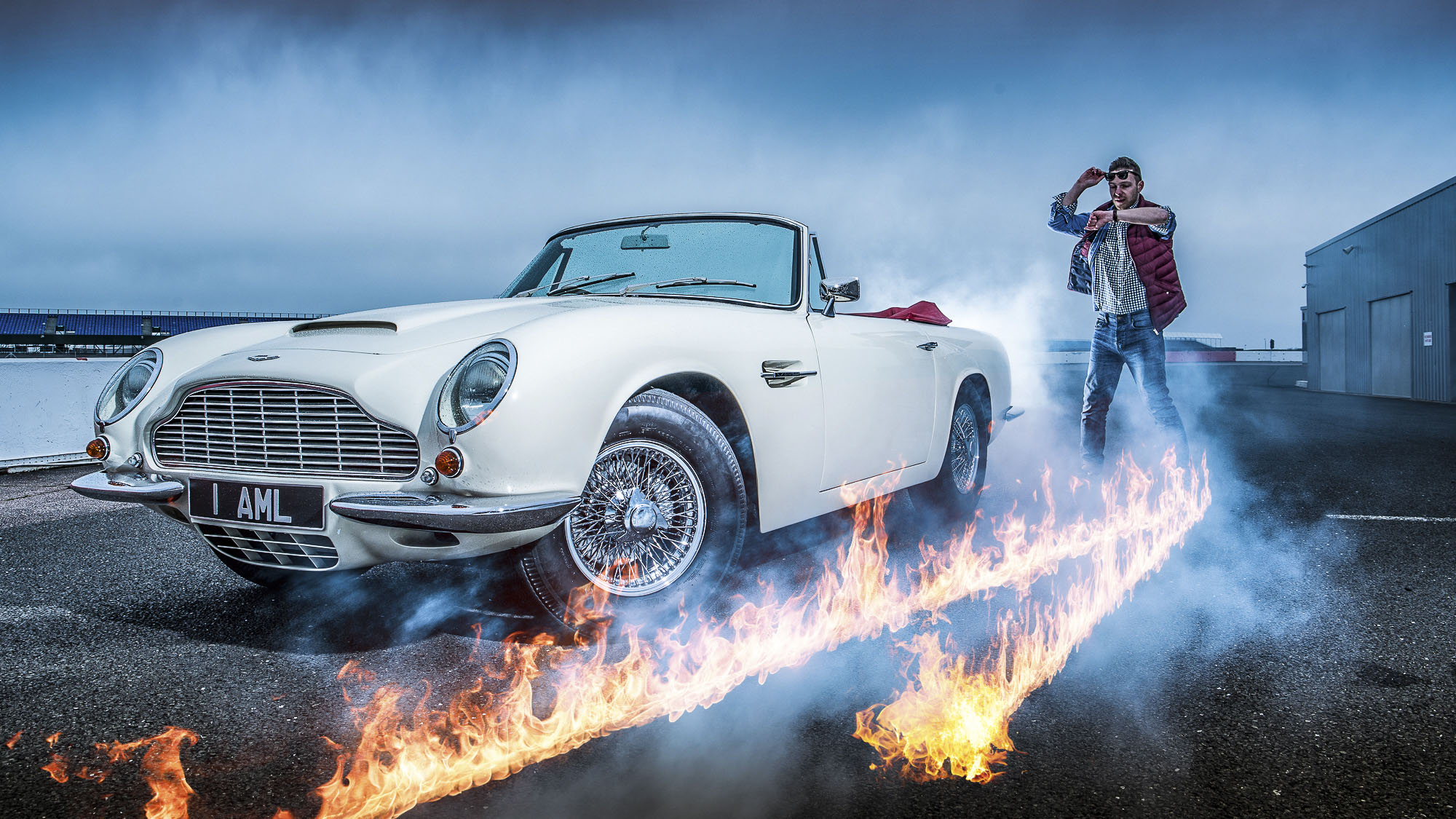 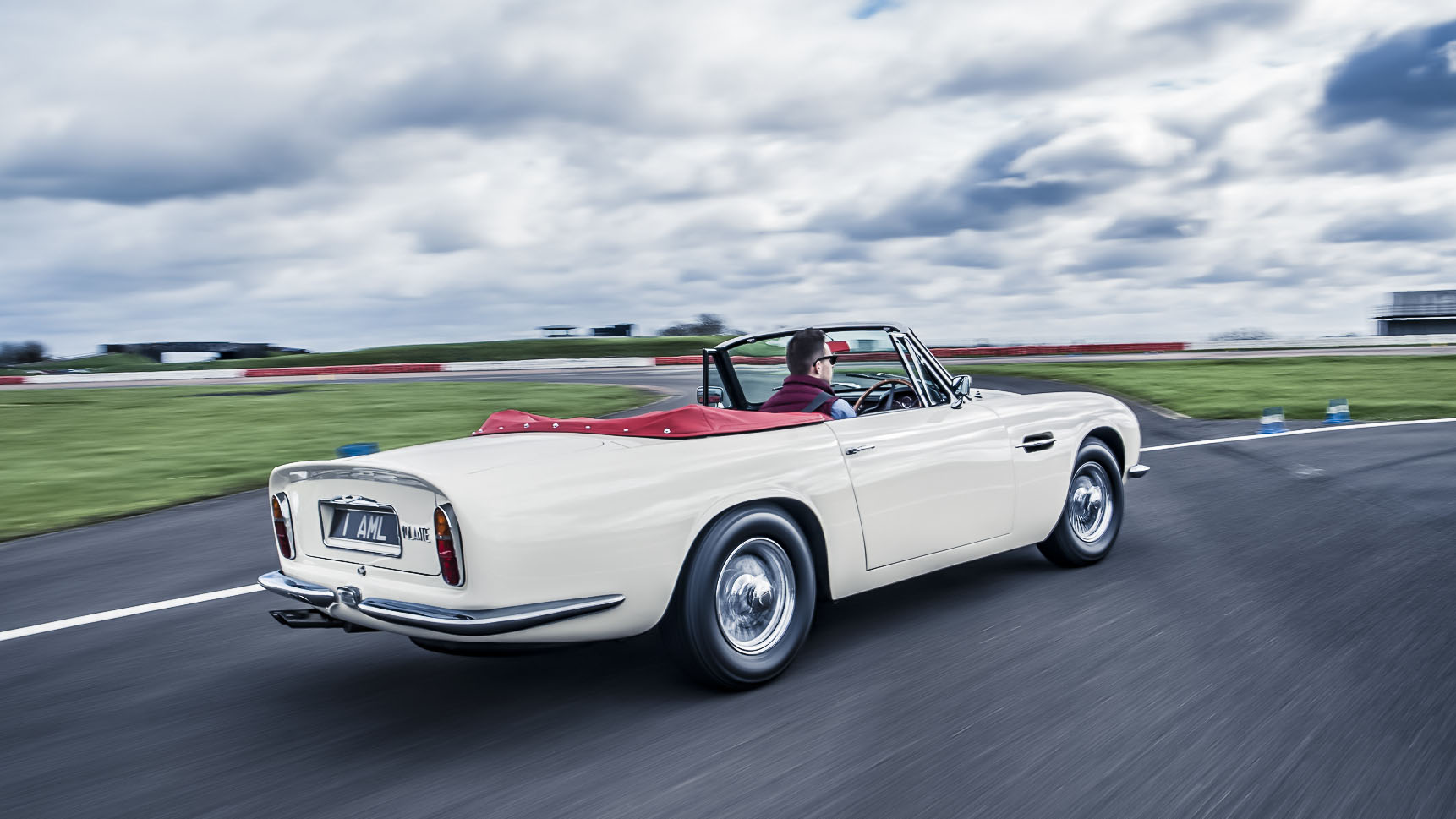 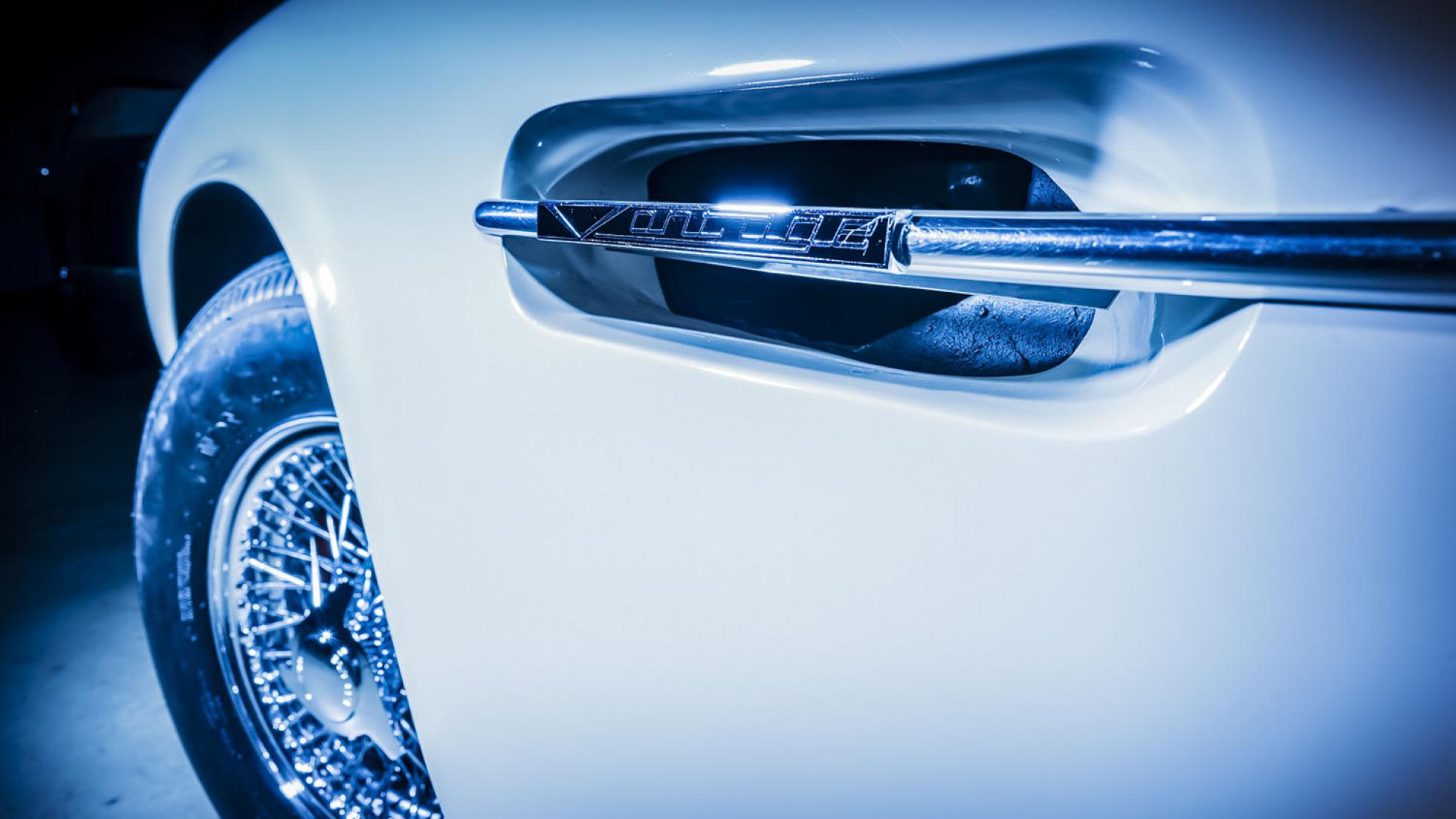 What is that and why are you pretending to be Marty McFly?

That, my friends, is an, no, the all-electric Aston Martin DB6 MkII Volante by Aston Martin Works. Because, to misquote Dr. Emmett Brown, “if you’re going to build electric power into a classic car, why not do it with some style?”

Well that car’s certainly got style. You, on the other hand…

Yeah, I know. This is not Hill Valley in 1985. Welcome to Silverstone’s Stowe Circuit on a chilly, blustery day in March. Ominous, inky clouds are gathering overhead, and this is our only day to drive, photograph and suss out a near-50-year-old car, that’s not exactly best friends with a Northamptonshire downpour. And I don’t just mean the fiddly soft-top roof.

This is the most modern supercar Aston Martin has ever made, and it’s from 1970. Valkyrie? Pur-lease. Still a prototype, confined to simulators and test beds. Propelled along by a collection of exploding ex-dinosaur vapours. No, this 49-year old slab of ivory and leather is a cutting-edge shockwave. Aston Martin’s first electric car.

I tried, but Aston Martin Works boss Paul Spires, who dreamt up this idea to convert classic Astons to silent, zero-emission power, and has sportingly agreed to let TG.com have a go, isn’t about to give away all of his team’s secrets. Aston Martin Works is genuinely worried that everyone from start-up companies to plucky garage-bound enthusiasts might try hacking apart their own classic and muscling in on the territory. Which would be economically distressing, not to mention somewhat dangerous.

What I can tell you is this. The battery pack and motor were designed not only to fit where the old 282bhp straight-six lay, but to deliver similar power and acceleration as the original engine, and weigh about the same (350kg). That means the suspension and brakes stay authentic, and so does the handling.

So the plan is for Aston to build more of these?

Yep. This is the proof of concept. Expect to pay around £200,000 for the fully-reversible EV conversion in your DB4, DB5, DB6 or DBS from 2020. And they’ll look at electrifying your Lagonda or Vantage too.

For the full philosophical breakdown from Aston Martin Works, check out the interview with Aston’s brains behind the ‘leccy DB6 here. Right now, there are spots of rain on the DB6’s Connolly leather hide. Regretting the novelty shirt and gilet combo quite hard right now.

Then again it might get a little toasty quite shortly. This time machine’s not ready for 88mph yet. It’s fragile, and eye-wateringly expensive. I promise not to exceed 50mph, and in the unlikely event of a “thermal issue” (British understatement for 'a ruddy great fireball'), park it on the grassy infield, not the expensive test track. Then bail out. Right-o. It starts via a jagged metal key, activated with a twisting motion. Nah, it’ll never catch on.

Haven’t you been paying attention? It’s not supposed to be.

That suits the Volante’s stately, upright sensibility. A Volante suits being gestured gently down the road, not hustled and thrashed. One elbow on the door top, finger and thumb on the studded wooden steering wheel. And no noise. No milk-float whine, no whizz of gears… just the gentle pad-pad-pad of thick crossply rubber on the track.

This is the most relaxing classic I’ve ever driven, despite being the most valuable – it’s worth over £1.3million.

I know I have to hand in my petrolhead membership card and resign for saying this, but I’m glad I haven’t got the pressure of changing gear, thanks. No double declutching on tired pedals or crunching pricey veteran gears.

I leave it in second from standstill and let the torque ooze me effortlessly along, while I luxuriate in the squashy embrace of the recently retrimmed chairs, and lazily unwind the pleasure cruiser steering. Strong regenerative braking means I don’t touch the actual brakes once all day. There's plenty of body roll even at 30mph. Keeping the speed below 50mph keeps the car cool, and ironically stops me turning into a block of ice.

But the Aston behaves. It doesn’t overheat, nothing grinds or clanks, and even when it’s asked to manoeuvre around at crawling pace to position a photograph, it doesn’t complain. There’s never a sense that I’m pushing my luck, and it might expire in a cloud of steam and money.

I know it’s a tricky concept to swallow. Sacriledge, to some. I struggled with the thought of electrifying what could be 007’s retirement present myself. But Aston Martin Works isn’t saying this is a compulsory process. No-one is forcing all the classic cars in the world to dump their engines.

This is just an idea, an offering, an experiment. It’s another adventurous chapter in the life of one gorgeous DB6. And… it’s bloody freezing. Great Scott.