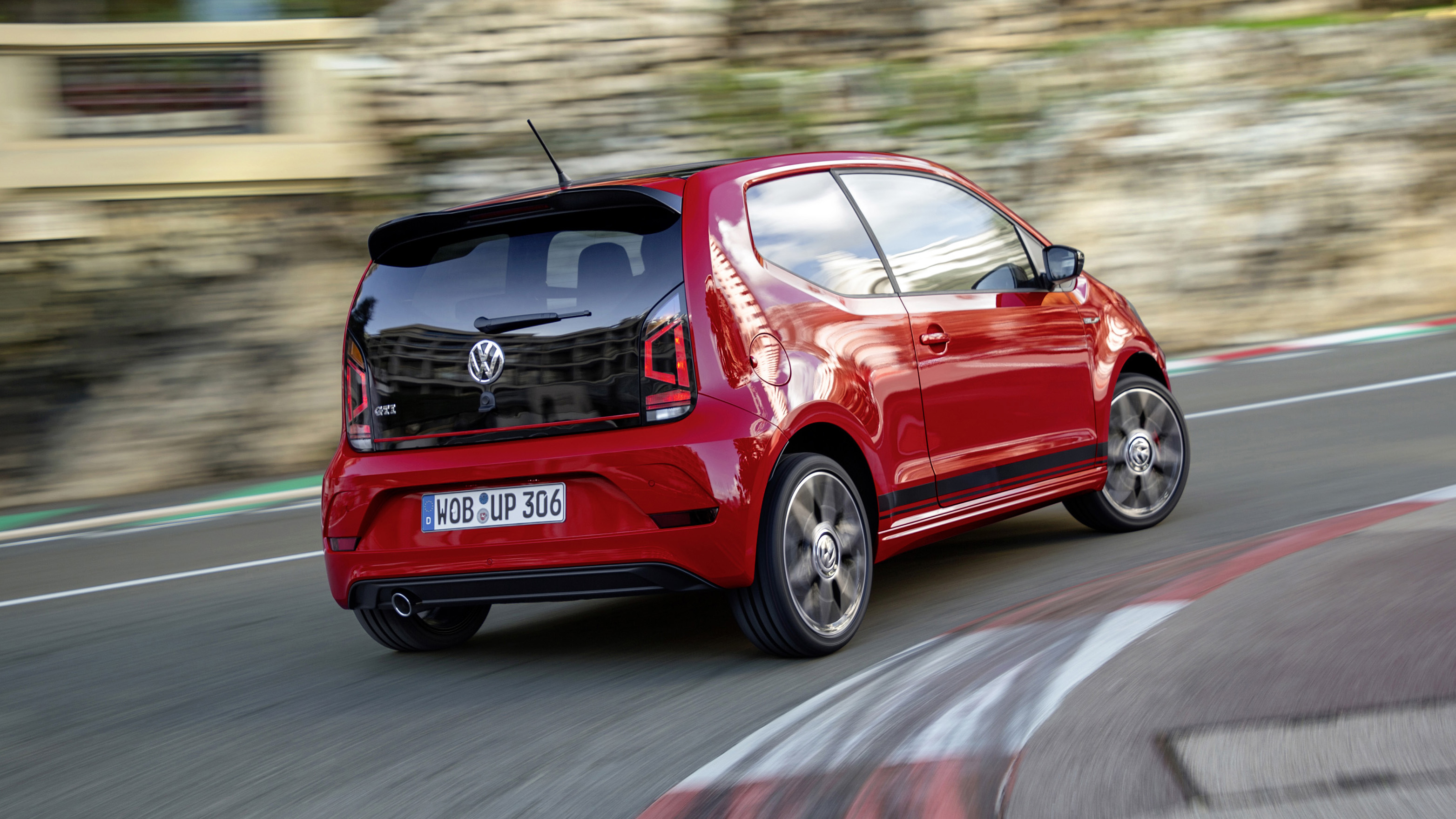 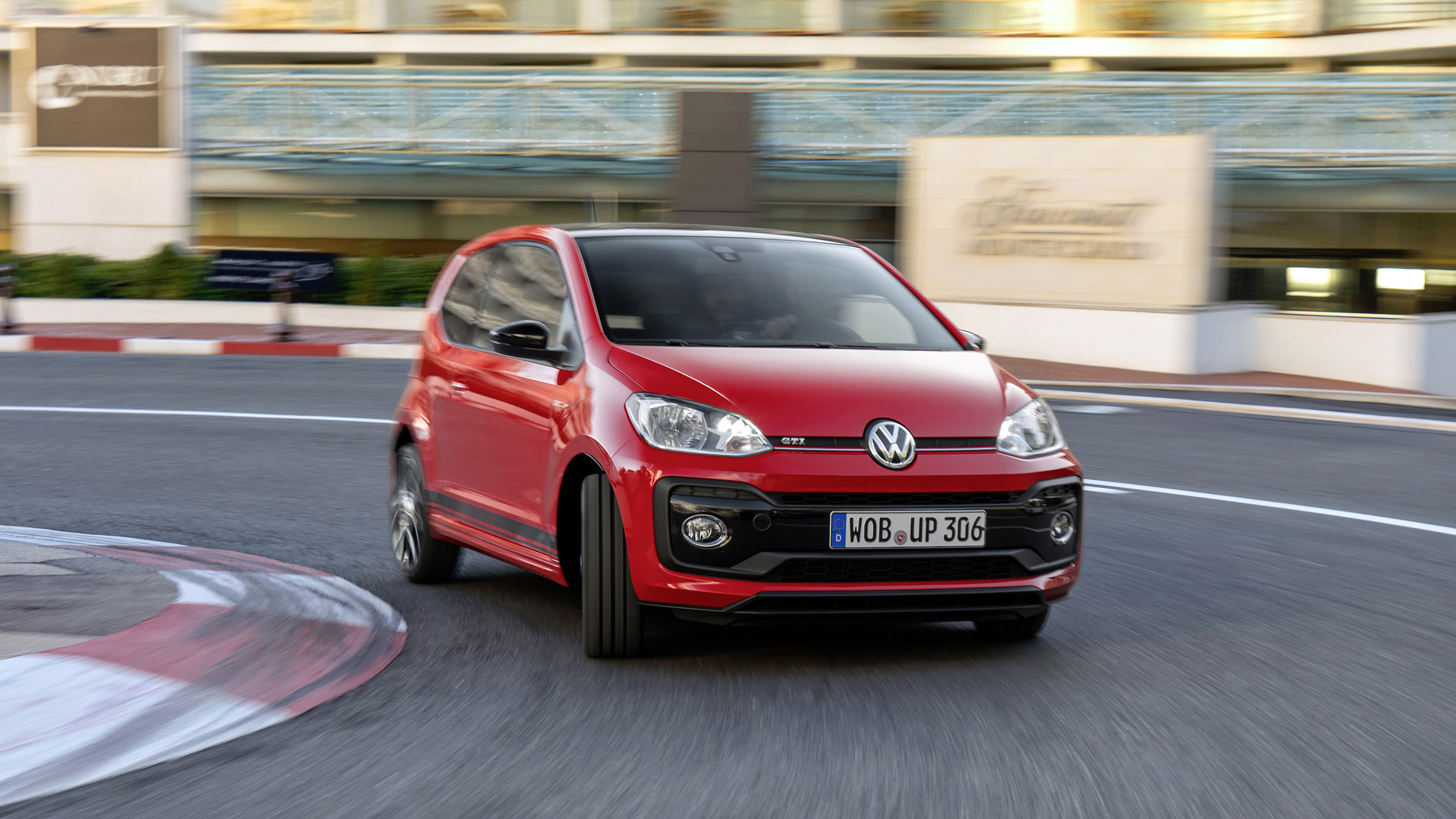 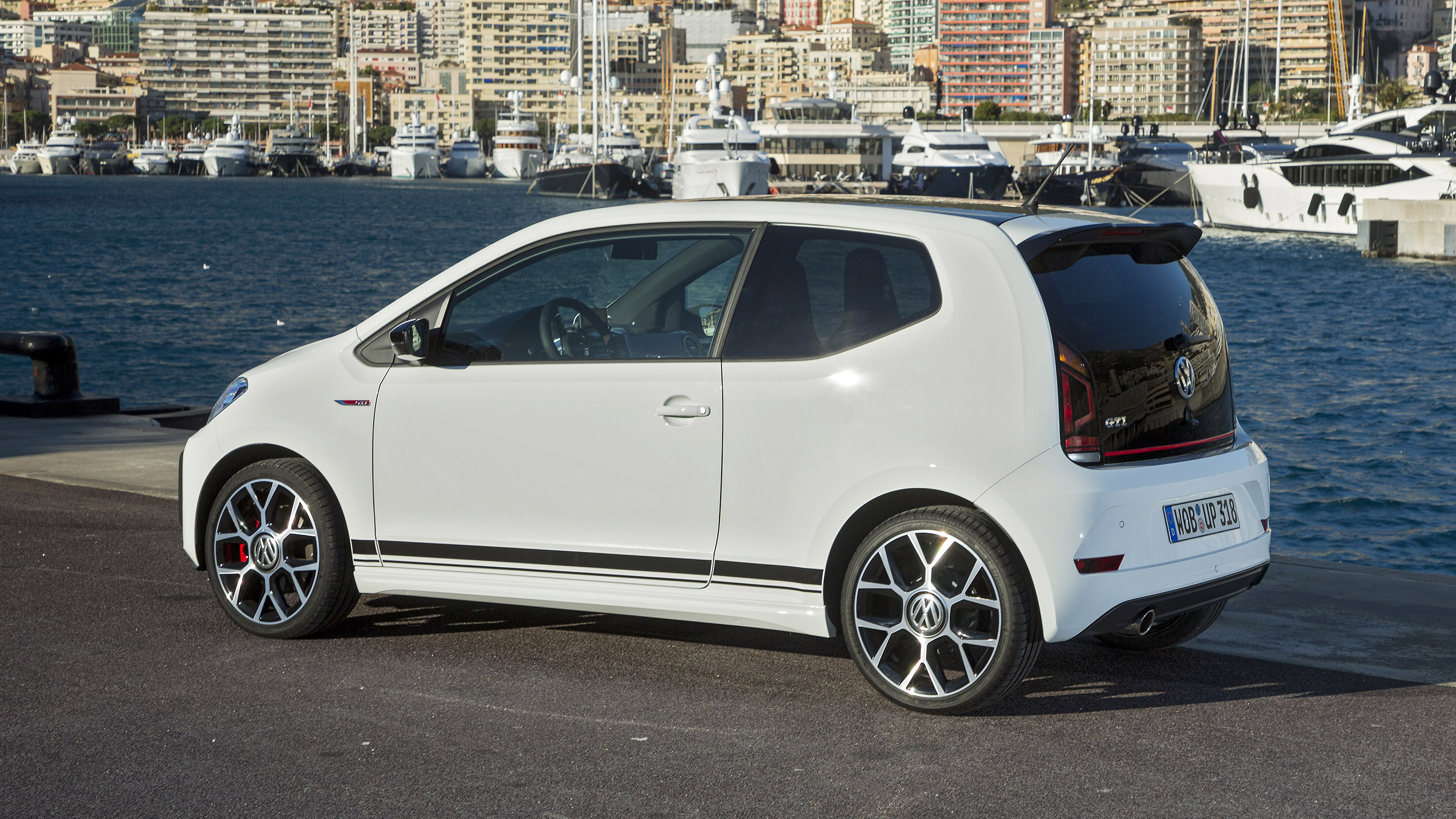 Hang on, you’ve driven the Up GTI before…

We have. We first drove Volkswagen’s most junior performance car in the company of a Bugatti Chiron, then later it was one of our finalists at Speed Week 2017, alongside a McLaren 720S, Porsche 911 GT3, Ford GT et al.

On both occasions it’s fair to say the Up’s 115bhp 1.0 was slightly… outpaced. This time we’re driving it solo, so it has the chance to shine while being chased by nothing more intimidating than its own shadow. Which also means it has no place to hide.

One more thing as well. Up until now the Up GTIs we’ve driven have been pre-production models. This one is fully finished and ready to sell.

It’s £13,750 for the three-door version, while the five door is only £400 more. You’re thinking that’s good value for a car with VW GTI pedigree, aren’t you?

Me too. Especially since it looks the part. The wheels, the side stripes, the badging, the tartan – it’s a very classily done and typically well executed hot hatch, slotting in perfectly below Golf GTI and Polo GTI and doing precisely nothing to upset the applecart or take too many risks.

What do you mean by that?

This is not an after hours project done by a bunch of dedicated engineers. This is a much more calculated car than that, one that’s probably been in the pipeline for years and whose launch timing is designed to give the Up range a useful fillip now it’s been on sale for over five years.

Now, there’s nothing wrong with that per se as long as the end justifies the means. In other words provided it’s good to drive, we don’t really mind what machinations went on behind the scenes.

Only VW is making quite a play of how closely this treads in the footsteps of the original Mk1 Golf GTI, now 42 years old. It’s the same size, the same power, the same performance, claims VW.

Nowhere is there mention of the fact it weighs a quarter of a tonne more. Nor that it achieves the same pace only because its 1.0-litre three cylinder engine is turbocharged, and therefore boasts 142lb ft of torque from 2,000rpm when the old car managed just 103lb ft at 5,000rpm.

But I digress, what matters is that the Up GTI exists, and that it follows in the footsteps of the mighty midget that was the early 2000s Lupo GTI. VW has proved they can do this sort of stuff.

Have they managed it again, though?

Hmm. I’d have to say no. At least not in the way we’d judge a conventional hot hatch. The steering is largely lifeless, the suspension gets jouncy over bumps, the gearshift ought to be snappier, the pedals better spaced, the traction control needs to be loosen-able, throttle response way more alert…

It turns out that driving it back to back with supercars wasn’t the issue, the Up GTI just isn’t quite as talented as it ought to be. And yet…

I still want one quite badly. It's kind of irrelevant that it doesn’t behave like a hot hatch, because it’s aimed at a different environment. The Up is a city car and the GTI version is a proper hoot in town. The standard Up benefits (size, view out, build quality, turning circle) are all there, and to that VW’s added enough character to put some pep in its step.

The engine might be flat until the needle passes 2,000rpm, but then it’s off in a second-gear scruffy scrabble of torque, torque steer and, if you’re lucky, a dash of wheelspin.

The gruff little three pot even sounds half-decent. And while the steering might not give you any feel, the front end it controls actually has enough bite and grip to give you confidence through the 195/40 R17 tyres. Mini-roundabouts are its natural hunting ground.

So for a dive about the urban landscape it takes some beating?

It does. It’s much smaller than a Mini, rides far better than an Abarth 500 (and is far better finished too), looks the part and acts the part. At a push you’d get three friends in there with you, it’s so friendly it’s not even faux-aggressive, and as standard it features most of the nice stuff you want.

That means a six-speaker stereo, USB, air con, Bluetooth, heated seats, DAB radio, plus affordable options to get sat nav and so on via a phone app. And I reckon that probably matters just as much to the average Up GTI buyer.

What about if I do take it to a cracking road?

Depends what your cracking road is like. I took it to the Col de Braus inland from Monaco, one of the stages of the Monte Carlo rally. Tight. Hairpin-y. Perilous drops.

And it was fun. It had enough performance in the low gears to feel rapid and carried good speed thanks to the efforts of that semi-tenacious front end. It did roll quite a bit, and soft springs meant it got uncomfortably out of sync with rougher sections of road surface, but it coped, the mind was willing, even if the flesh was weak.

But in the valleys where the roads were broader and the corners more open it started to feel more timid, like it was somewhere it didn’t properly belong. Suddenly it lost its voice, the low-down torque punch evaporated in the face of fourth gear and the short wheelbase chassis, so good at aiding turn-in at mini-roundabouts and hairpins, felt less content.

Did I mind? No. I actually liked the fact that this isn’t one of those overwhelmingly professional cars that attempt to be peerless wherever you take them.

So it’s a new type of city GTI?

It is, one that’s just as concerned with the way it looks as the way it behaves. Because while up top we can gaze in satisfaction at all the GTI trinketry, under the skin the setup isn’t as glamorous.

The McPherson strut and torsion beam suspension layout is the same, only with beefier mounting points, the springs and dampers are uprated and the body sits 15mm closer to the ground, but there’s no adaptive suspension, not even a sport setting for the traction control.

Personally I think and hope it’ll be a big success, and that it will attract new buyers to the GTI flag – because heaven knows this isn’t a car in the mould of the hardcore Lupo GTI. That was properly tenacious.

This comes from a different place. Clearly it doesn’t want to alienate a clientele that’s likely to be carrying eggs in the boot. I want one more than I would a Polo GTI, so that’s a feather in its cap, but I couldn’t escape the feeling the Up GTI is designed to give buyers a taste of what a GTI is, but not the full experience.