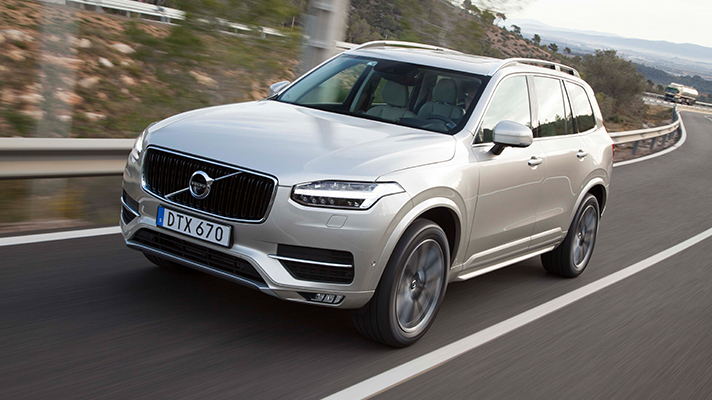 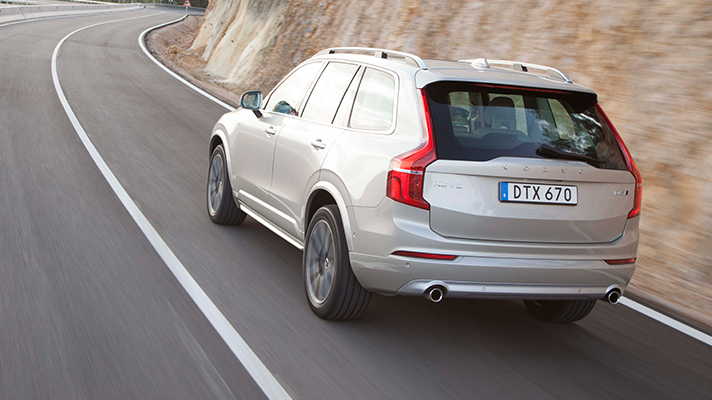 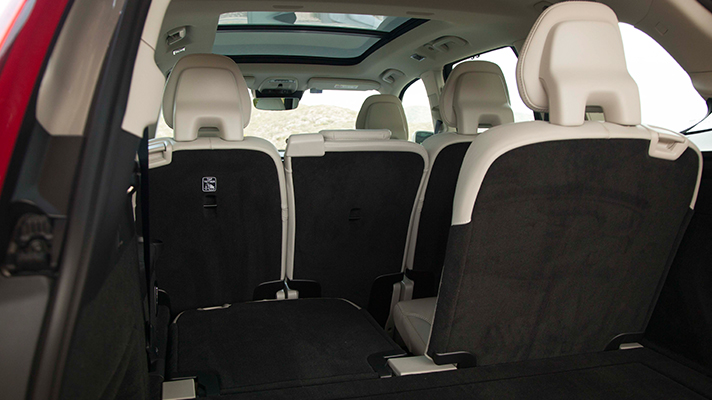 The new Volvo XC90, traditionally the official car of middle-class Cotswold families. That said, prices are no longer for the squeezed middle, as the XC90 has moved up a level. But as we'll see it has worked hard to justify the increase: the second-gen XC90 isn't new as in ‘somewhat updated'. It's new as in ‘all-new'.

An all-new platform, which has all-new suspension, electrics and driver interface. Even, if you look closely, a redesigned Volvo badge. And-new powertrains.

It still looks like a vast family wagon to me.

Yup, big on the outside and seemingly even bigger within. There are three rows of very habitable seats, and luggage space behind that. It's also endlessly versatile, thanks to any number of sliding, reclining and folding permutations. All seats have a surprisingly good view out too, thanks to their careful 'theatre' positioning and glassy sides.

How did they fit it all in?

How's a little 2.0-litre going to haul all this car along?

The D5 diesel has two blowers and makes a handy 225bhp. The T6 petrol has a supercharger and a turbo, for a stout 320. They both serve up reasonably quiet and very broad-shouldered push, but to be honest you'd want a more interesting noise from the petrol. The engineers say they're working on that in the final weeks before full production starts. Both those engines come with normal mechanical four-wheel-drive.

Hybrid four-wheel drive. The other XC90 is the top-end T8. This pairs the same 320bhp petrol with an electric drive to the rear. By doing away with the propshaft there's room in the spine of the car for a plug-in hybrid battery. Result is 400bhp performance in one mode, and up to 25 miles of pure EV range in another. And a notional 113mpg to the taxman.

It launches a few months after the others, and the example I drove needed a more progressive brake pedal and less nervous transmission calibration. Volvo says fixes are in the works. But drive it with some thought and it's smooth and near-silent in urban hybrid driving, and properly rapid with both power units on the go.

Who drives a Volvo seven-seater fast?

Not many, but in fact the new chassis is pretty capable. The XC90 never does big understeer, and controls its roll and body heave very well. But it's not meant to inspire your inner cornerist. It's about brisk, discreet progress.

So what's it really good at?

Comfort, for a start. Not just the static comfort of seats and space, but comfort on the move. The optional air suspension serves up an admirably placid ride, even on the 20-inch wheels that are standard at top trim. The optional 21s make things a little jiggly. But noise is pretty low too so a cruise to the skiing holiday would be just dandy.

Ah yes the new ‘human-machine interface'. It's a touchscreen that's superbly powerful and responsive, with very smooth tablet-style graphics and gestures. Satnav and a net connection are standard, and you can pair it with Apple Carplay and, later Android Auto.

But the system operates so well as-is, I don't see why you would. Swipe down from the top and you can access a huge range of configurable options for the car's other systems too. Switching between climate, phone, navigation and entertainment screens is trivially easy. But you don't need to especially often because a concise version of each of those is displayed in tiles on the home screen.

Is it nice on the inside?

Well beyond nice. Really top-notch. It's simple and calming yet very premium. But in a warm, Scandi sort of way.

Amazingly so. Volvo studies real-world crashes more than crash tests and works hard to make cars that avoid them or protect against them. They really do think no-one will be killed in a new Volvo in 2020 - the reduction in casualties since about 2010 has been on the right path.

The XC90 has a vastly solid cage, and a panoply of active avoidance systems, some unique. Even the 12-year-old outgoing XC90 still tops lots of safety lists.