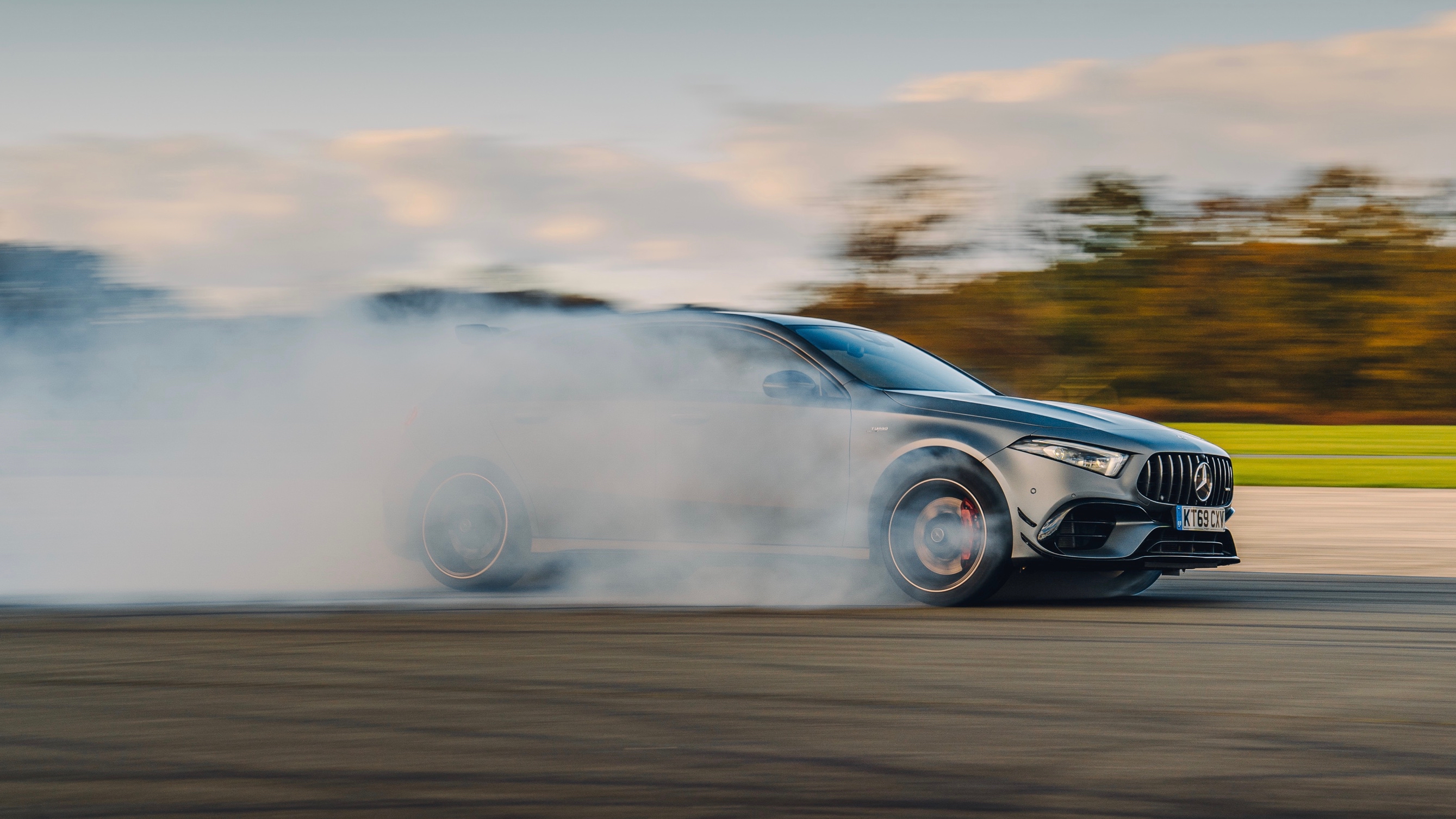 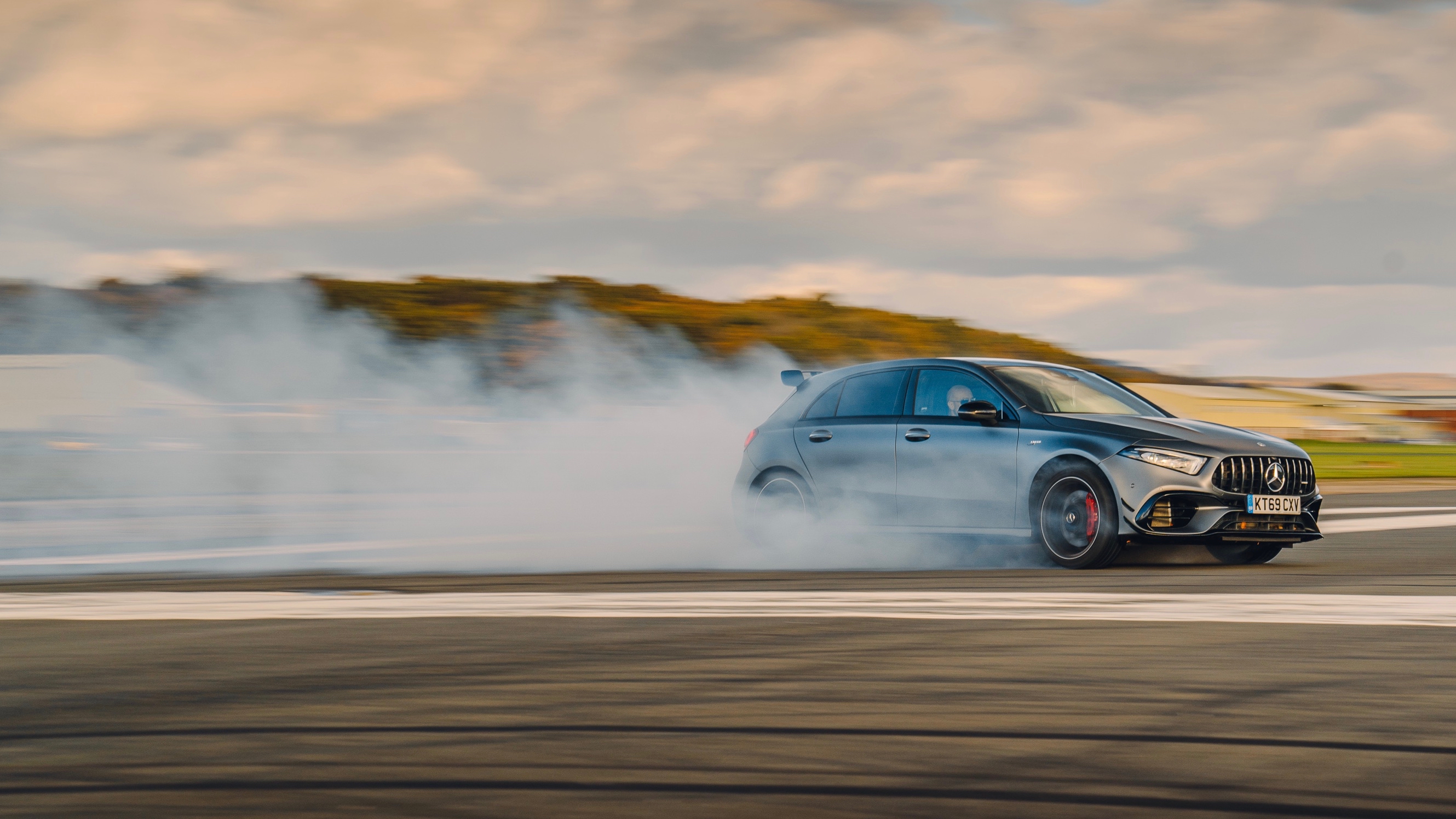 Not for the first time, AMG has fitted one of its cars with a Drift mode. And once again, there’s no faster way in which to get shot of a load of that superfluous tyre tread. I only did this to the A45 S once, but the outer rear tyre will carry the scars until the end of its days. Days that are now measured in weeks, rather than months.

Two things about this. Firstly, I hugely admire AMG’s dedication to daftness. A hot hatch doesn’t need this, but no other hatch has it or does it, so that puts the A45 in a class of one. Very few other hot hatches have the necessary hardware to skid around in circles and none has the power.

It’s worth pointing out the 4WD system is very trick – a mechanical diff at the front, but at the rear a pair of sophisticated clutch packs that can send 100 per cent of the torque to either wheel. Drift mode then limits torque to the front axle provided you’re giving it maximum sideways attack with the steering and throttle. Limits, not disconnects. The A45, as you can tell from the smoke pouring off the front wheels, is never just rear drive only.

Which brings me on to my second point. Which is that this is, er, pointless. OK, maybe not entirely. If you have convenient access to an ice lake, then you’ll have a whale of a time. However, you’d have a whaler of a time if you were in something actually rear-wheel drive. Which brings me further on, via a roundabout route, to the BMW M5 I ran a couple of years ago. It wasn’t the first car to have Drift mode, but like the Mercedes E63 that preceded it and lent the template to the A45, it was exclusively rear-drive in Drift mode.

Now, as with the A45 and E63, you had to take the big boy pills before engaging it, because both systems demand you ramp every dynamic setting to maximum in order to access Drift: manual gears, stability control disengaged. Which means there’s no safety net if you get it wrong. I took the risk a few times in the M5, just to see if it felt any different on the road. And it did. Turns out 600bhp has a tendency to overcome the available grip of two tyres quite quickly, and once the turbos are blowing properly a two-tonne saloon can very quickly get away from you. Sweaty palms and hurried returns to Comfort mode followed shortly after.

In the A45 I’ve never seen a need to go near Drift on the road at any time – not least because in this more self-aware version, should you straighten the steering or lift off the throttle mid-skid, the system assumes playtime is over and gathers you back up. Probably just as well.

But as I said higher up, I admire AMG for developing it. They must have done so in the full knowledge that vanishingly few owners would ever have the opportunity, let alone the desire, to use it. And yet they went ahead and did it. It’s things like this that make me feel good about the A45 – which is probably AMG's intention all along.

Because I am increasingly well disposed to this car. I don’t really think of it as a hot hatch, instead I see it in a similar light to the RS6 that came before it – as an all-weather family car with a sharpened edge. It was my wife that got me on to this train of thought. I’d been telling her how ridiculously expensive the A45 was, when she pointed out she thought it felt as expensive and well equipped as the Audi – and wasn’t it about half the price of the estate? She had a point, and when I thought further on this, I realised I enjoyed driving it more than the RS6, too. Less size and weight to manage, feistier engine, tough little nugget to drive. It has flaws – I wish the 4WD system behaved more naturally, for instance. Except when it’s in Drift mode. Then it can be an unnatural as it likes.