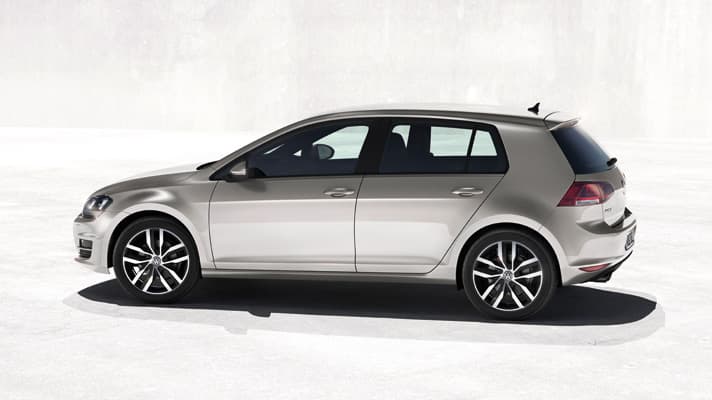 The BMW 3-Series wasn't the first sports saloon of its size; there were Alfas and others. The Range Rover wasn't the first luxury SUV - go look up the Jeep Wagoneer. And the Golf wasn't the first compact hatchback, because the Simca 1100 did it years earlier. But BMW, Land Rover and VW, with complete dedication and unwavering direction, waxed and polished their respective templates over generations. They've reached the point where they define their classes and make all their rivals seem like mere impersonations.

So even though this year VW entirely rebuilt the Golf, the character of the thing hardly altered at all. It simply got better. The ride is far smoother now, and it was already pretty much class-leading. It's even quieter, though again it already was almost as good as it got. The interior quality, which was itself for many people reason enough to buy a Golf, has advanced another increment. There's a smidge more agility in the handling. The torquey and economical new 140bhp turbo petrol engine, which when going gently can imperceptibly switch to just two cylinders to save fuel, makes you wonder why people bother with noisy, expensive diesels.

It's subtle to look at. Come closer, admire the details and the finesse of the surfaces and the lines. Stopped or on the move, it feels like it's made of stronger materials than the hatches of other nations.

So why is this the year of the Golf? Because it really is all new. The ambition of the VW Group's fresh components kit is Olympian. It's more flexible, so all the different variants across brands will be more diverse than the ‘platform cars' of old. The new engineering has also rationalised production, so that over time it'll save the company billions. That means the Golf is better value than ever. Just try configuring a Mercedes A-Class to match your chosen Golf. Then drive them, and it's the Mercedes that feels like the imposter.

And if it still looks a bit dear, remember that - because everywhere you look there are people who want one - it's the 24-carat used car. Other mass-brand hatches depreciate faster, eroding their new-price advantage. See? We can do sensible advice here at TG.

Sometimes, it can be hard to find a question for which Golf isn't the answer. It's right-sized for the city and nimble in the country. Yet at normal motorway speed, a Golf is more relaxed than many big-tyred luxury barges. By plundering the options list, you can spec up all manner of big-car technologies and aids. Even so it carries the advantages of compactness: less fuel, lower costs.

Top and bottom: a Golf is no more car than you need, yet it can be all the car you want.