Italy takes on Germany in a fight for the punchy, small SUV title

No-one needs a 500bhp SUV. An SUV that, in Alfa’s hands, went round the Nurburging in 7mins 51.7secs, a tenth quicker than a Lambo Gallardo LP560-4. An SUV that, even in our hands and wearing winter tyres, scooted itself to 60mph in 3.9secs. An SUV that, perhaps even more than a Lamborghini Urus, (or the newly announced Jaguar F-Pace SVR and Maserati Levante Trofeo) can lay claim to being the pinnacle of SUV sportiness. No-one needs it. But don’t you just, sort of… want one?

I mean look at the way it moves. In the gallery below there’s an image of the Stelvio QV exiting a corner. Study it. Look at the way the rear end has squated, the nose lifted, that hint of opposite lock suggesting which end is dominating the power delivery. And is that a slight twist in the chassis or a weird dangle of the wheels? Either way, the impression is that the chassis can barely contain the forces acting on it. It’s a great picture, one that accurately communicates what it feels like when you get on the gas hard when exiting a second gear corner in an Alfa Romeo Stelvio QV.

Skip 27 photos in the image carousel and continue reading 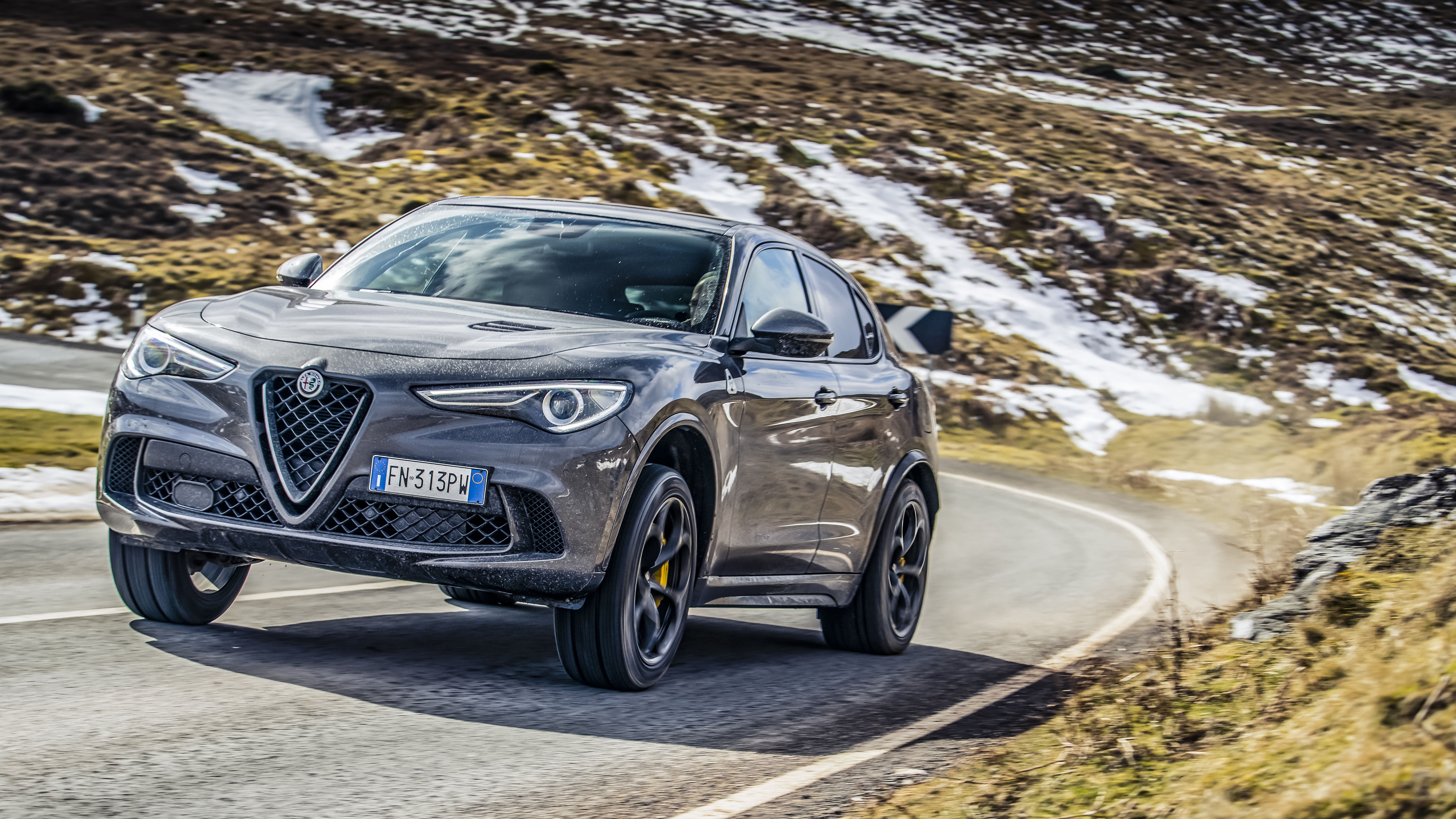 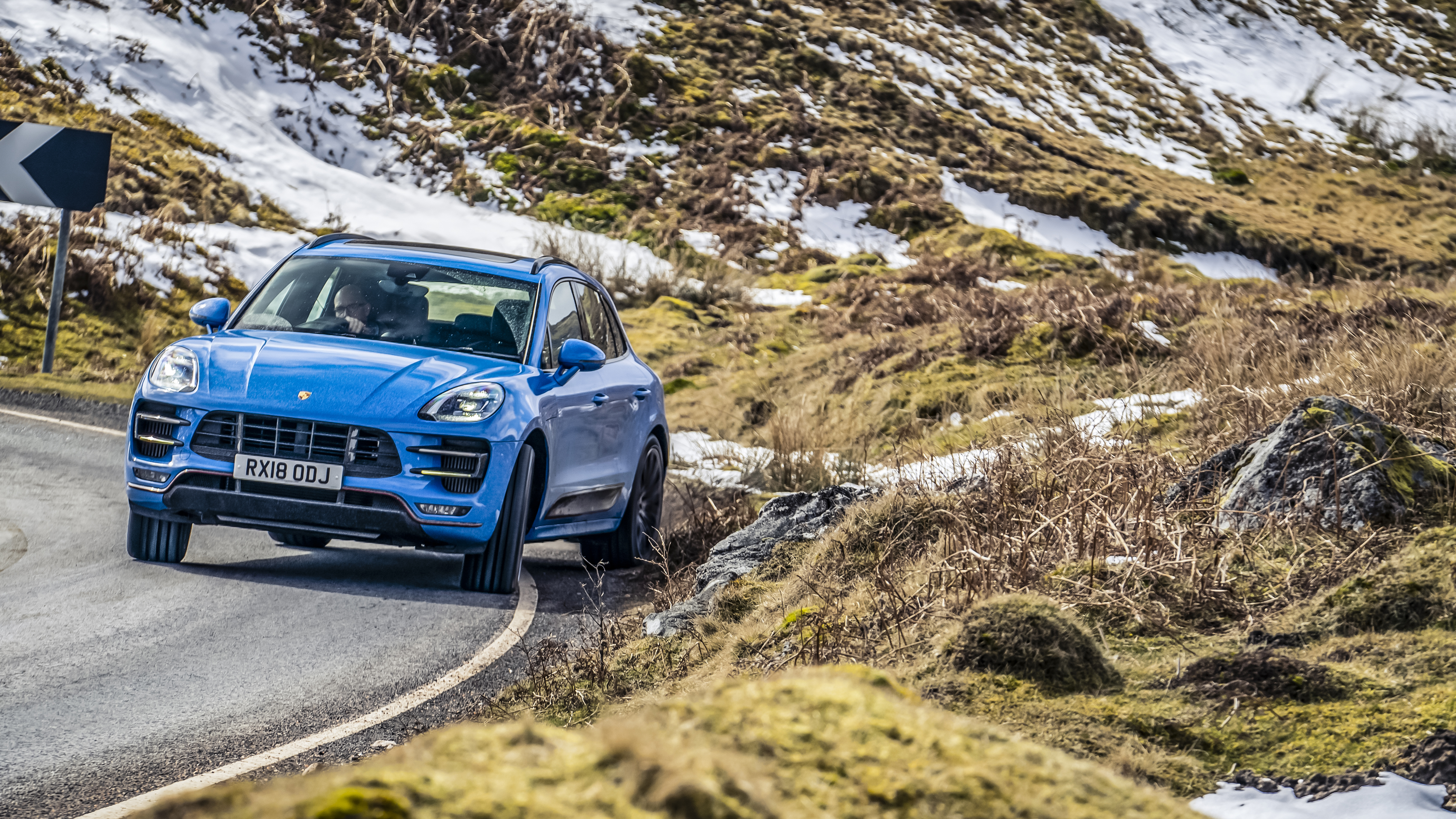 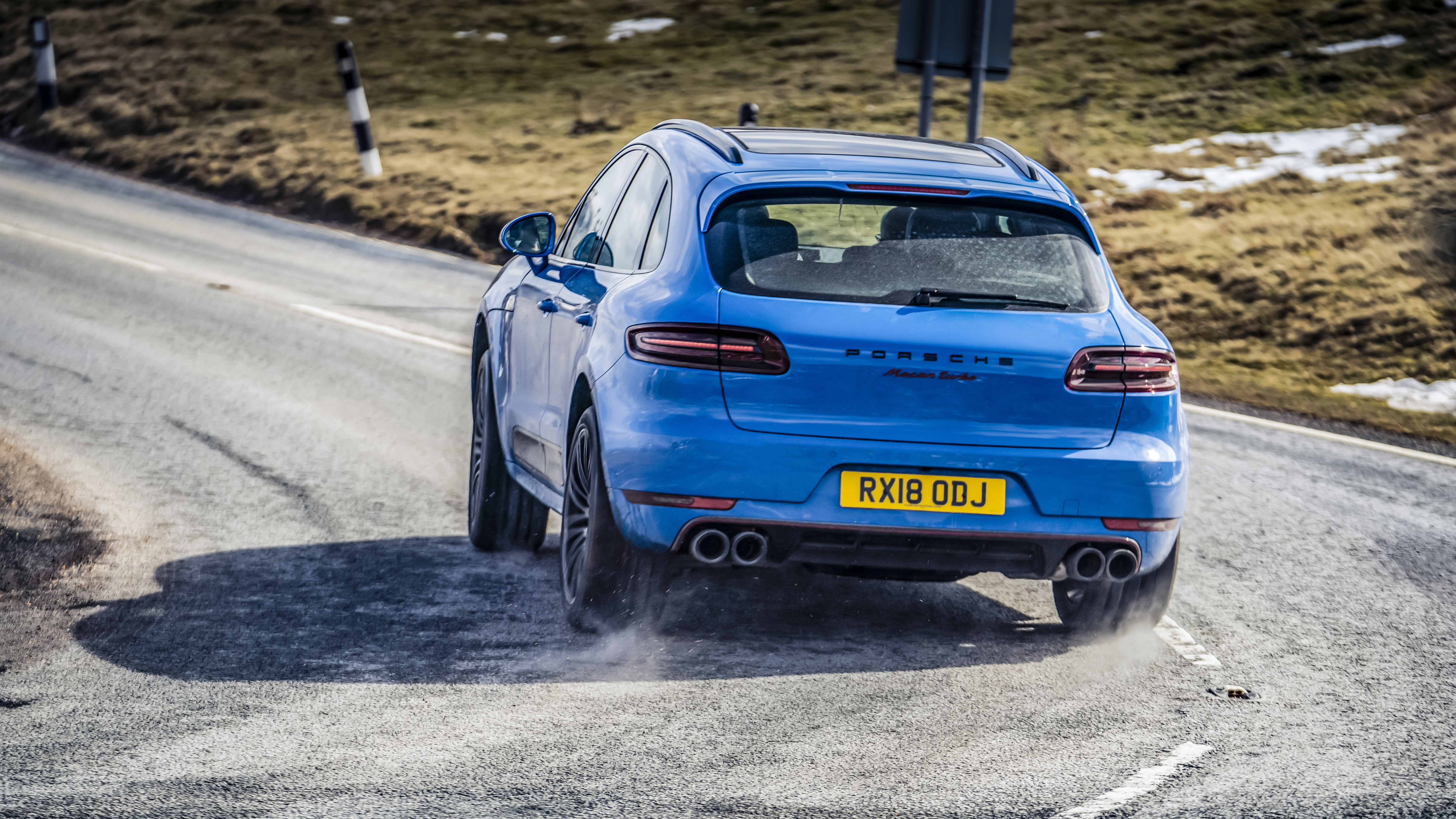 Compare and contrast with the Porsche Macan. Oh, there’s not much wrong with a Turbo – that’s 400bhp right there, 440bhp in this case with the Performance Pack bringing tweaked turbos plus larger brakes, 15mm lower suspension and standard sports exhaust. But it’s not 500 brake, is it? And that cornering shot – more professional, right? Not quite so delightfully… expressive.

But: £70,000. That’s sobering, isn’t it? That’s a serious sum of money, not trivial at all, a grown-up, deep-breath-before-you-sign purchase. Is hilarity alone enough reason to make you ink the dotted line?

It should come as no surprise that the Stelvio is a hoot. It shares most of its oily bits (engine, gearbox, chassis) with the Giulia QV, while the most fundamental addition, the 4wd system, is borrowed from the Maserati Levante. And for the majority of the time, that doesn’t send power anywhere near the front wheels. The Stelvio is rear drive only until it starts to slide. That picture again – taken a moment after the Alfa had sent 50 per cent of its drive forwards, perhaps?

The Macan is different. Underneath, not a super-saloon, but a more prosaic Audi Q5. Sure, it was intended to be a Porsche from the start. But also an Audi. And, in China, the VW Phideon. Eight cars in total, which means no-one gets exactly what they want. But you’d never know. This looks, feels and acts like a Porsche. The interior has zero Audi influence, the driving position is great, quality predictably superior. Switchgear, infotainment, fixtures and fittings, storage, materials. All knock the Stelvio into a cocked hat. Only one car here feels remotely like a 70-grander. 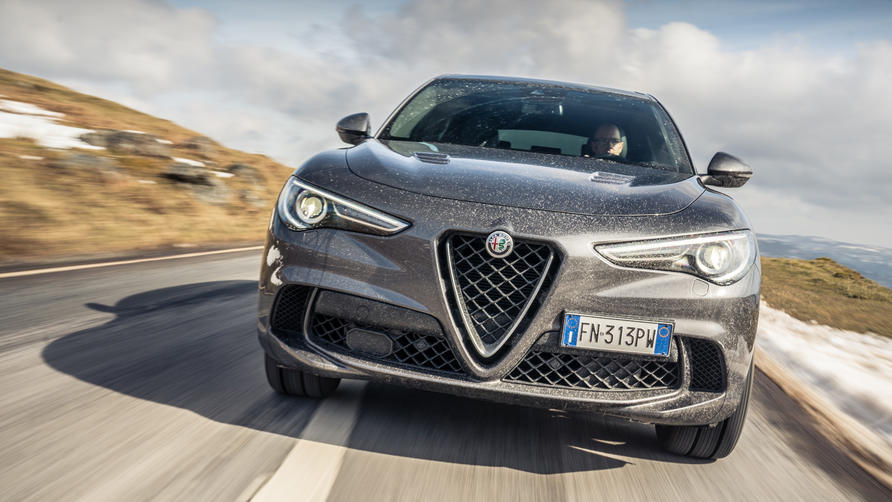 And then you stand back and think “£70,000 for a mid-range SUV with no TVs in the back and barely room for the pooch. What the f…”. If that’s you, head to Land Rover – they’ll sort you out. But those who are left appreciate the value in the Macan and Stelvio lies in the driving, componentry and engineering focused on the driver, not his passengers. So, a 3.6-litre twin turbo V6 for the Porsche and a more heavily stressed 2.9-litre twin turbo V6 for the Alfa. Seven-speed twin clutch meets eight-speed auto.

And perhaps most pertinently of all: 2000kg meets 1830kg. Yep, the Macan is dense, which perhaps explains why it never feels as penetratingly fast as its rival. It’s less lively on the road, too, the steering is a bit flaccid. What it is compared to the Alfa, is competent. It holds itself together better on a difficult, bucking road, and in isolation it’s satisfying – it keeps control of itself and there’s a good balance between power and grip and steering rate and roll. You do need to press buttons, get into Sport or Sport Plus to get the response you want from the engine and gearbox, but even then it’s less aggressive and sharp handling than the faster Cayennes, let alone the Alfa.

But then I’m not sure many Cayennes ride as well as the Macan. The Stelvio certainly doesn’t. The chassis is stiff, and that’s allowed Porsche to make the suspension supple, so it disguises its speed, isolates you from it, better than the Alfa. It’s also generally quieter – engine, as well as road noise – and the gearbox is very, very slick. Unless you’re charging along in Sport Plus, where it comes over all BMW M3 and shunts them home artificially. 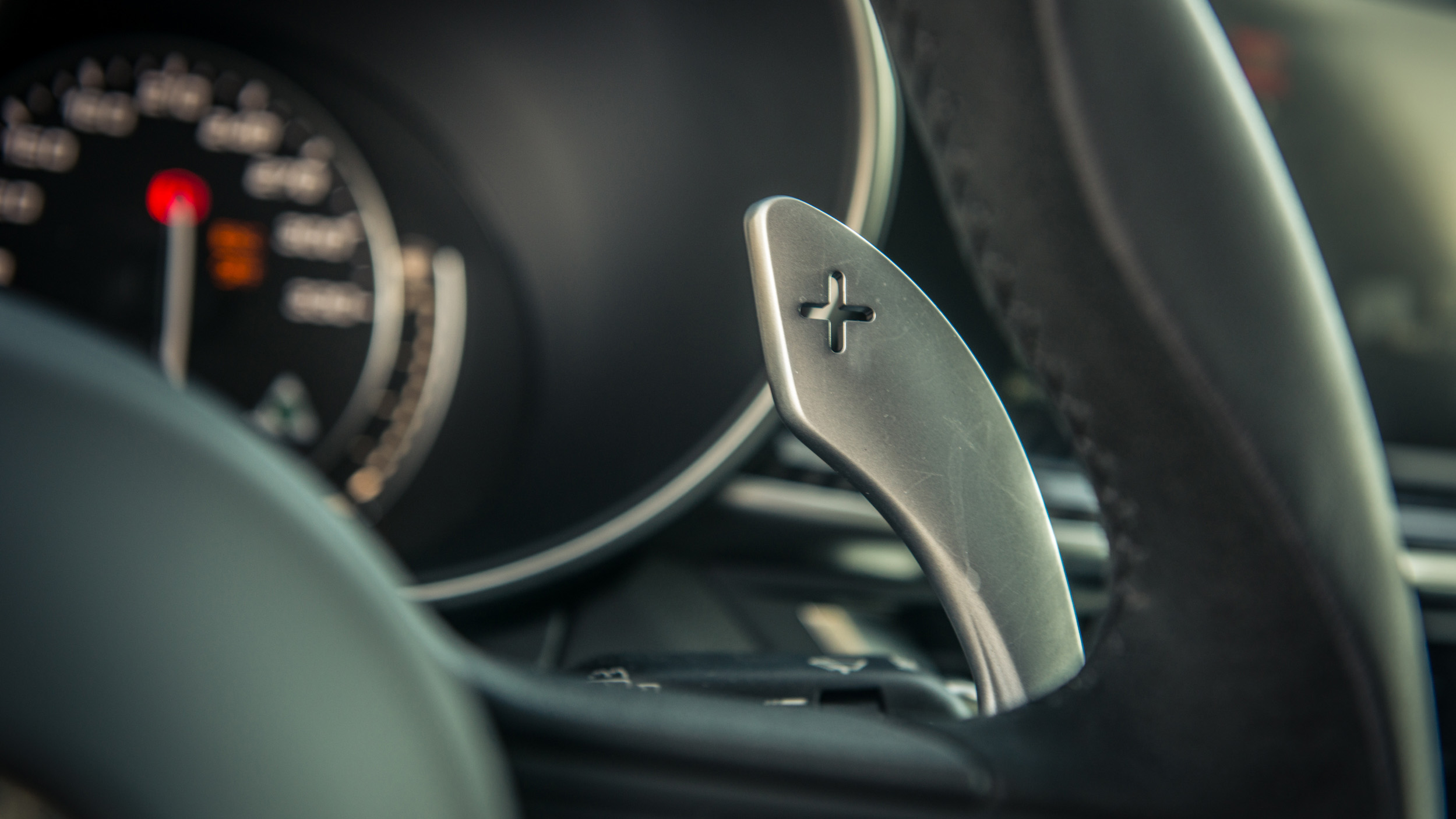 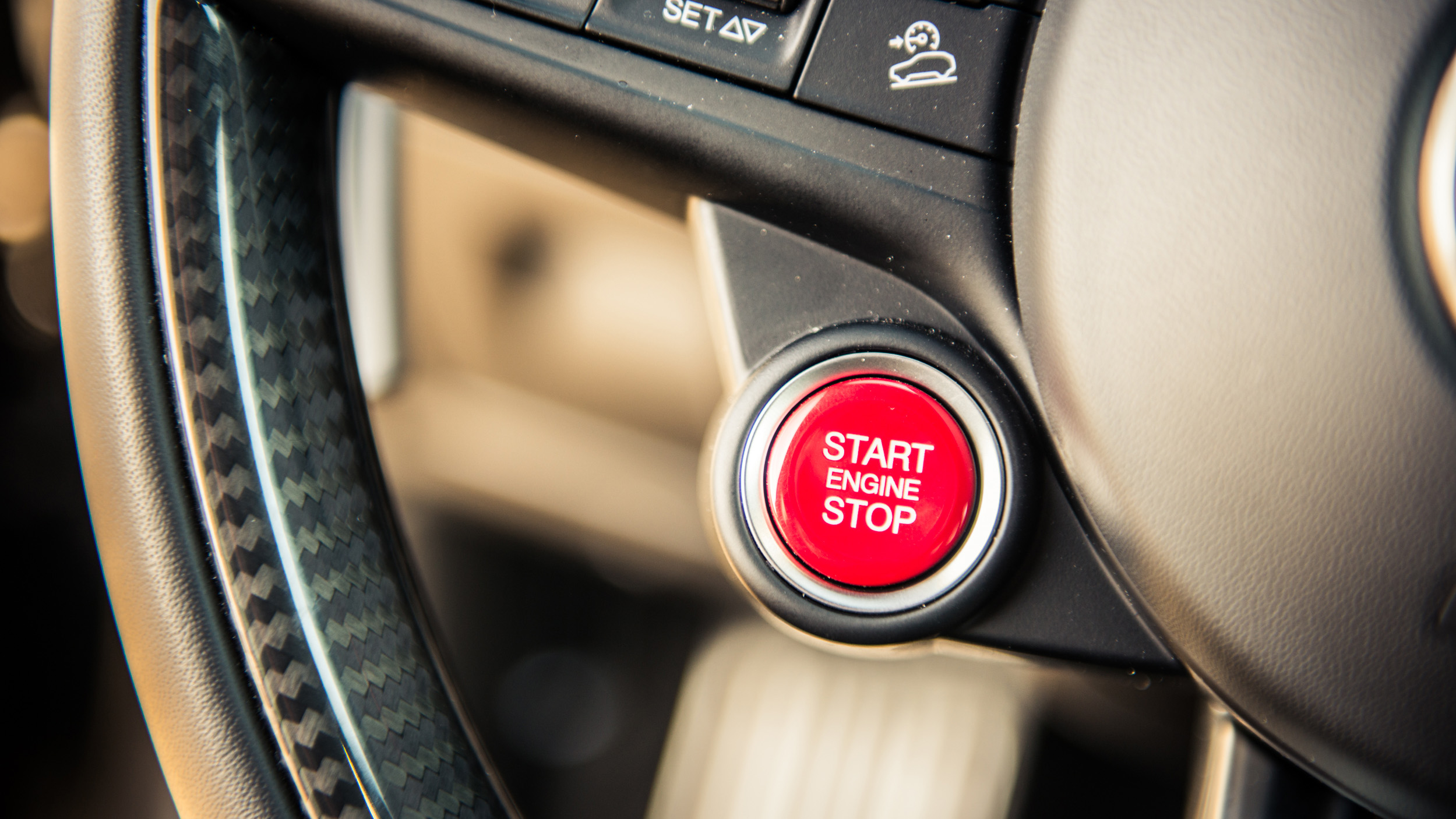 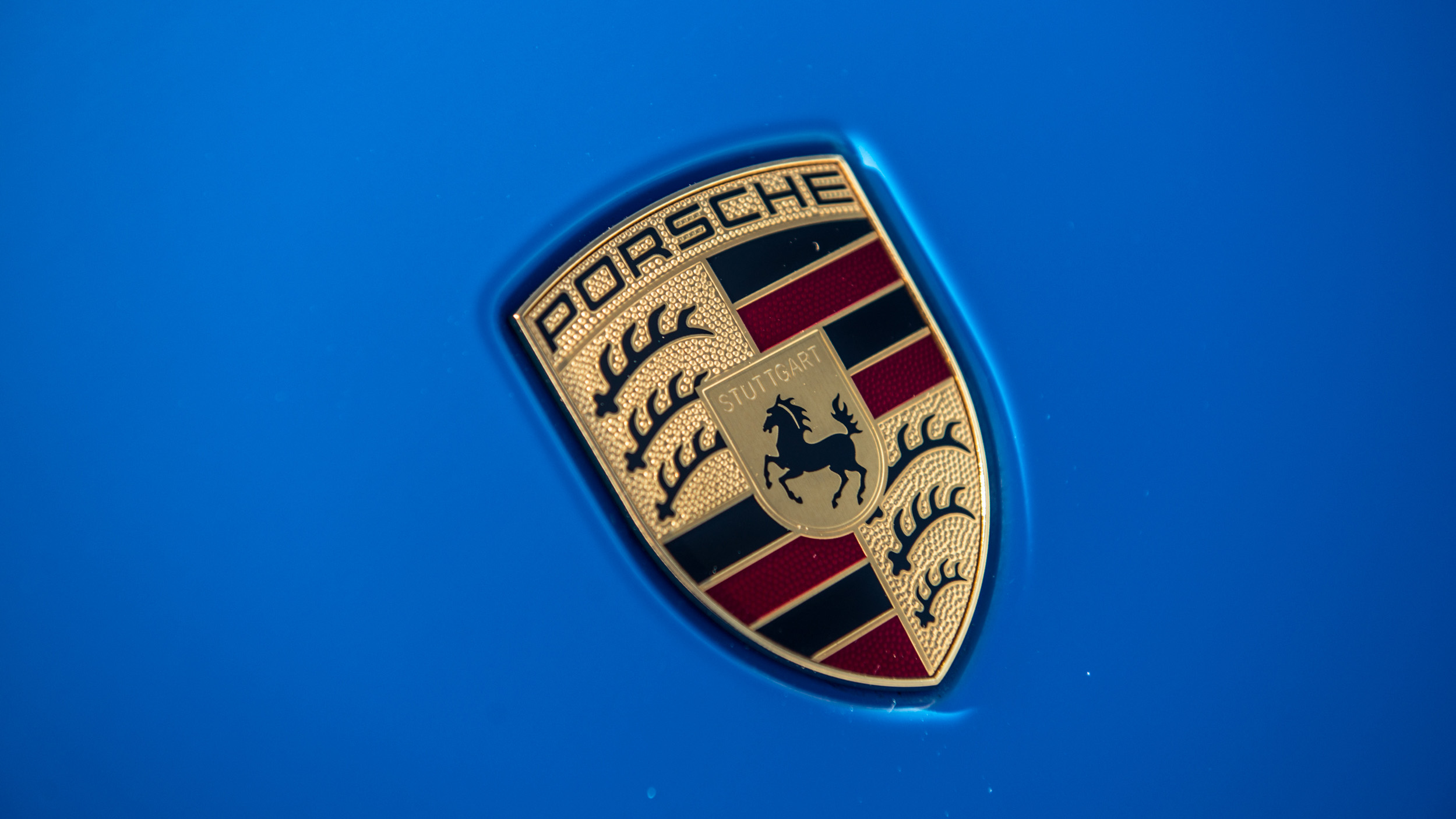 The engine? Effective. Less operatic, but strong over an even wider range and a couple of mpg more efficient (no winners when 23 plays 21). Overall it drives tightly, and comes across as energetic despite its weight. It’s a less commanding, demanding car to drive, and that might suit you better. But if you want real flamboyance, a bit of SUV sparkle, it has to be the Stelvio.

Sure, the cabin is flimsy, rear visibility poor, fuel consumption a joke, the ride busy, rear headroom tight, you sit too high (hang on, this is getting to be quite a long list), but… But you’ll cope with that. Well, you will if you want a fast SUV that drives like no other. Just clog it and hold on. Listen to that exhaust flatulence, feel yourself get sucked into the upholstery, watch the scenery rush towards you – it’s a joyful thing, happy to be let off the leash. The steering is super-sharp, so’s the throttle response, and the brakes. You can keep your inputs small and yet the car’s corresponding gestures are expansive. It drives with flair. It drives as if Pavarotti is standing out the sunroof like a rotund tank commander, celebrating each crackling, detonating upshift.

It’s also bloody well engineered. The engine is tucked down and back, aiding the centre of gravity, and confusing you, who is sat so high, into disbelief that it can corner so quickly. The ride is less placid – there’s a springiness to it’s behaviour, a slight lack of body control that I suspect would be settled with – ironically – more weight on board. 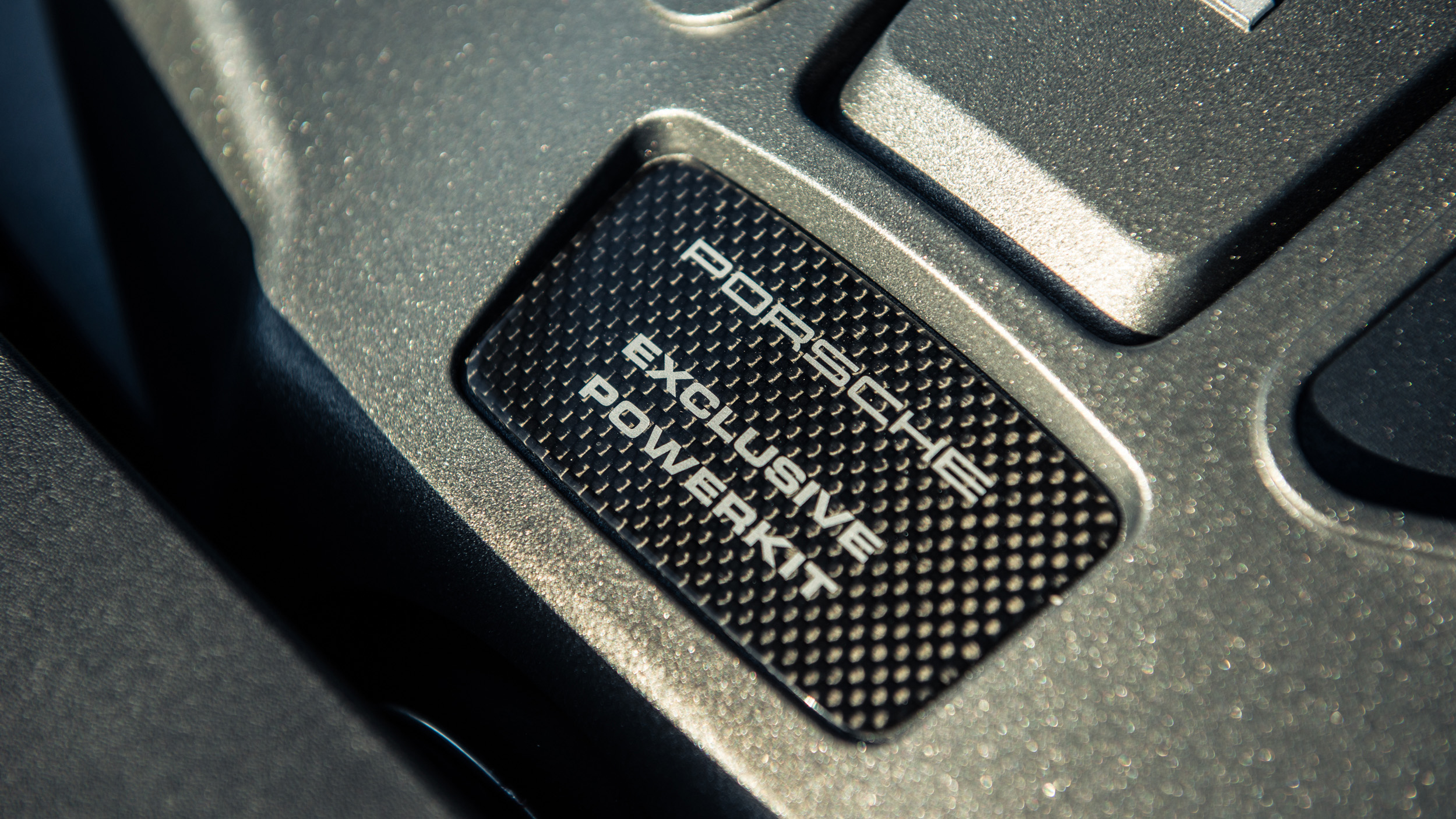 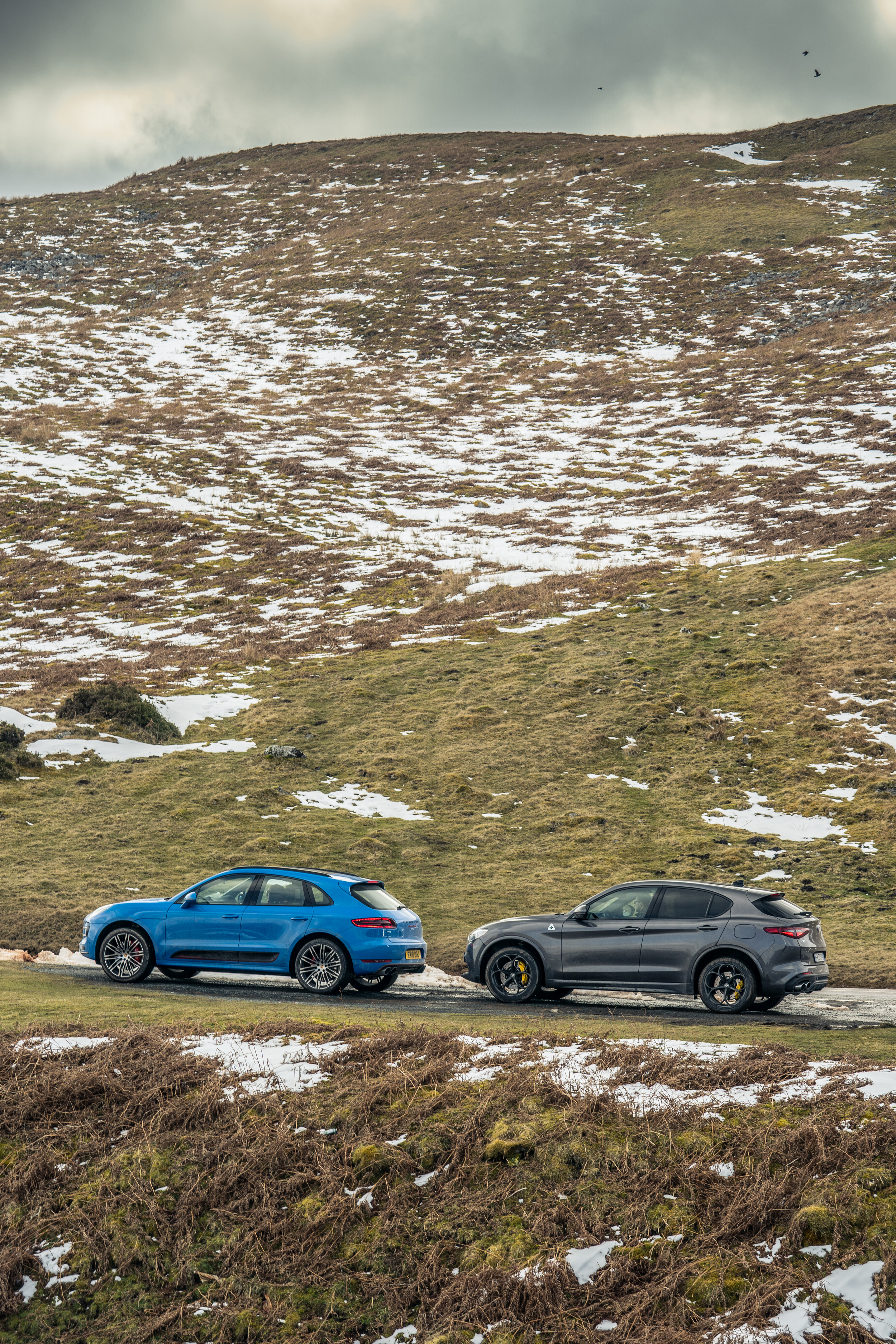 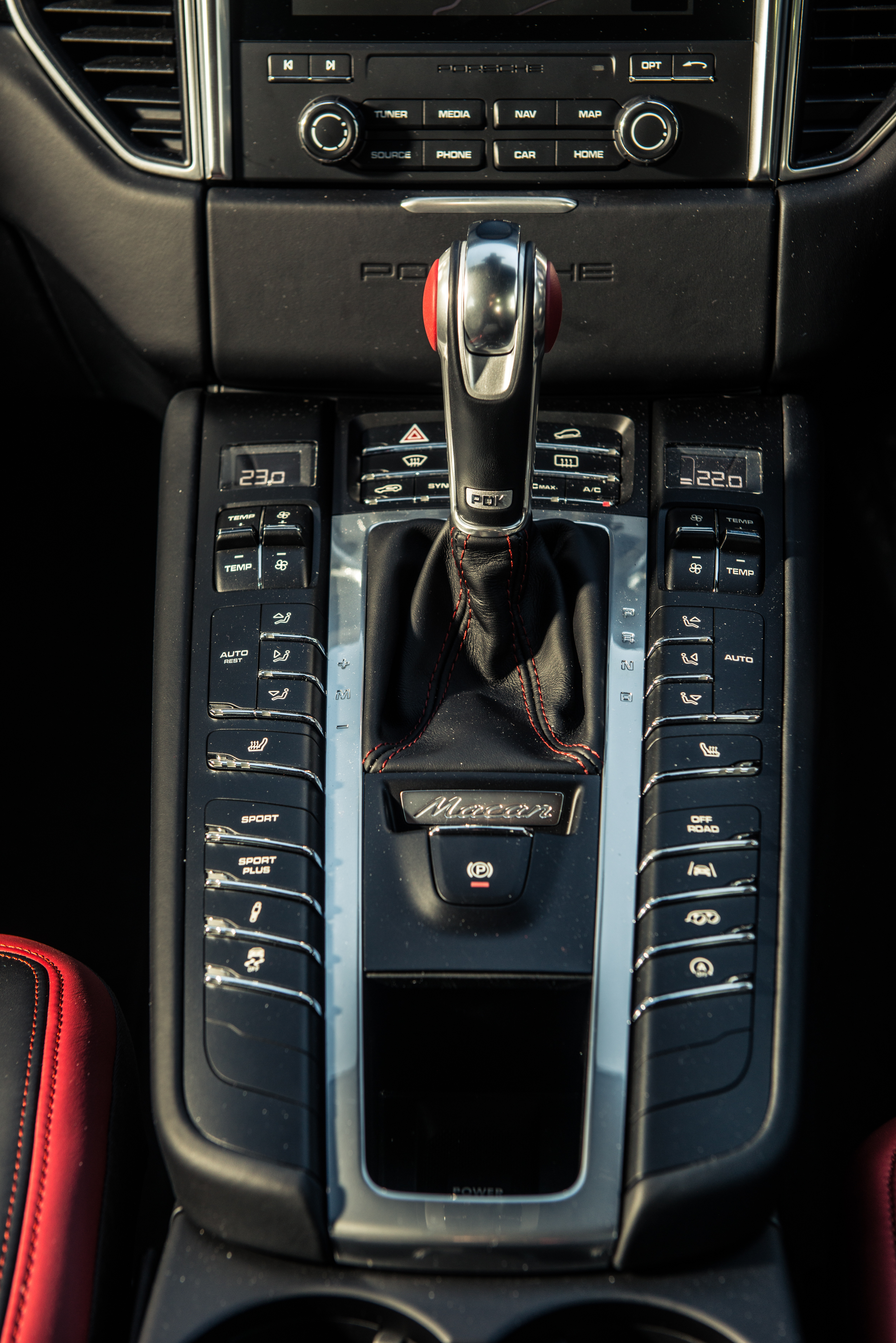 We once said of the Macan: “it’s the quickest, best-driving SUV on the planet”. That, at least, is no longer true. If that phrase resonates with you, if you want a half price Urus, the boastability of it all, then the Stelvio is it. It’s the cooler car. But then consider the compromises required, the inherent flaws. It’s a less competent one car solution than the Macan, and that’s surely the aim of these cars. If driving enjoyment really matters, you won’t be shopping here at all, you’d be looking at a Giulia QV or a fast estate. Come to think of it, why aren’t you? I would, given a straight choice. C63? RS4 even? Don’t mind if I do.

The verdict here, then. Have the C63. Oops, no. You want an SUV don’t you? The Macan Turbo then, because its range of abilities is wider, it’s the one I’d rather inflict on my family. Is this what you want to hear? No? Then have the exuberant Stelvio QV. And every time you come out of a corner, clog it, giggle and picture what it looks like.