Driving an old Ferrari 308 is tricky and very excellent

Reckon you’re handy in your fancy ‘modern’ cars? Pah! Try something old instead

Good lord, the smell. An unmistakable stench of petrol and old leather. Exhaust fumes laden with really quite aggressive carbon dioxides fill the atmosphere. The engineers are nonchalantly chatting and laughing in the company of the Ferrari 308 idly blaring in front of us in Ferrari’s Fiorano pit lane, but mostly it’s impossible not to get a headache from the smell.

Get past that, however, and a whole new world of pain awaits. Thinking. Spoiler alert: driving an old car requires you to actually think. Welcome to Ferrari’s Classiche Academy, where the glamour of driving an old, quite gorgeous classic Ferrari is countenanced by… actually having to drive an old, quite gorgeous classic Ferrari.

The theme of our mission today can be extrapolated outside the world of Ferrari unobtanium. Driving today has become… sanitised, hasn’t it? Somewhere along the line, amidst the lane assists and perfumed air conditioning and interior mood lighting, have we lost sight of what made us all enjoy the art of driving in the first place? Luigino Barp, affectionately known as Gigi, certainly thinks so. 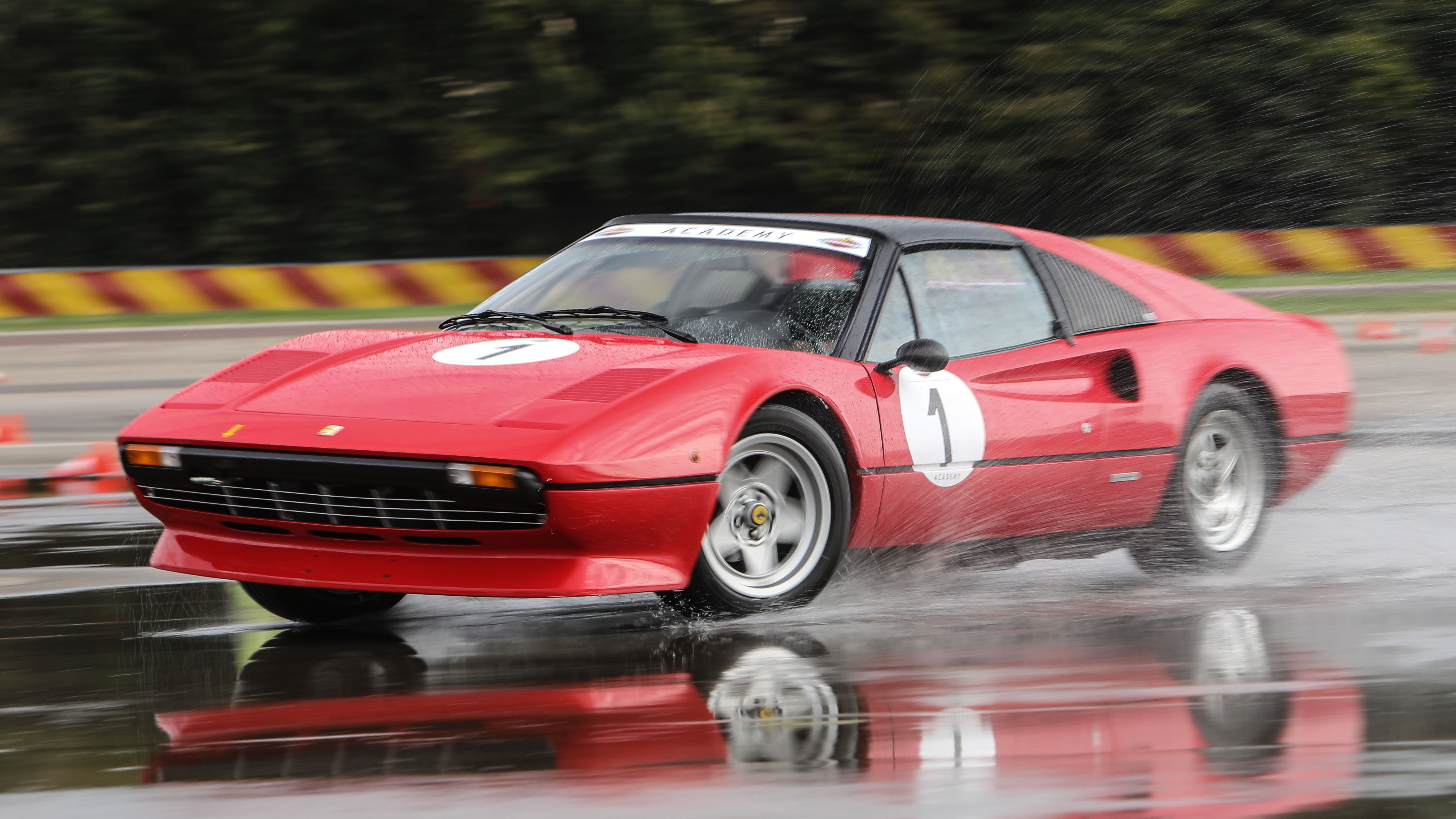 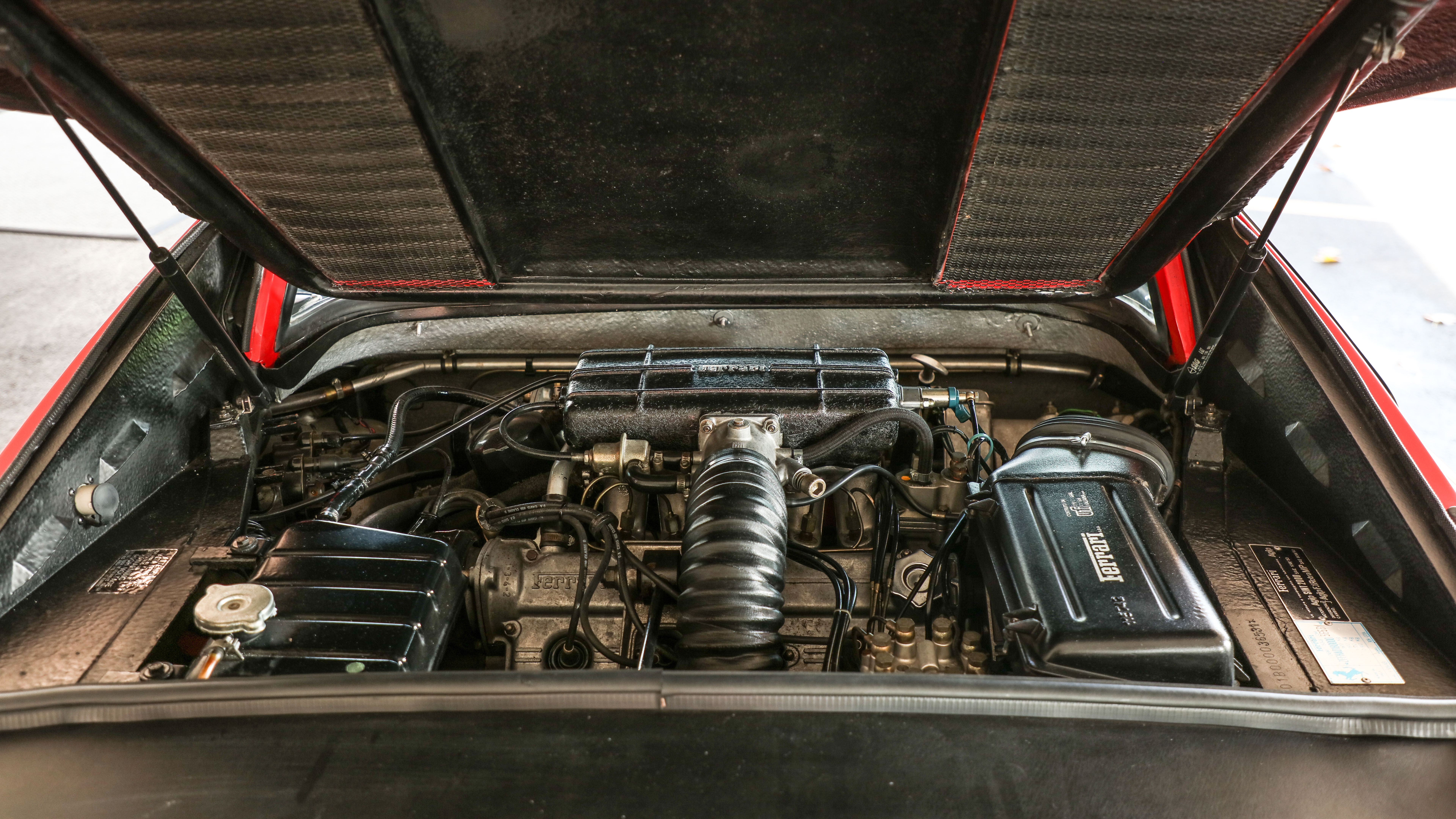 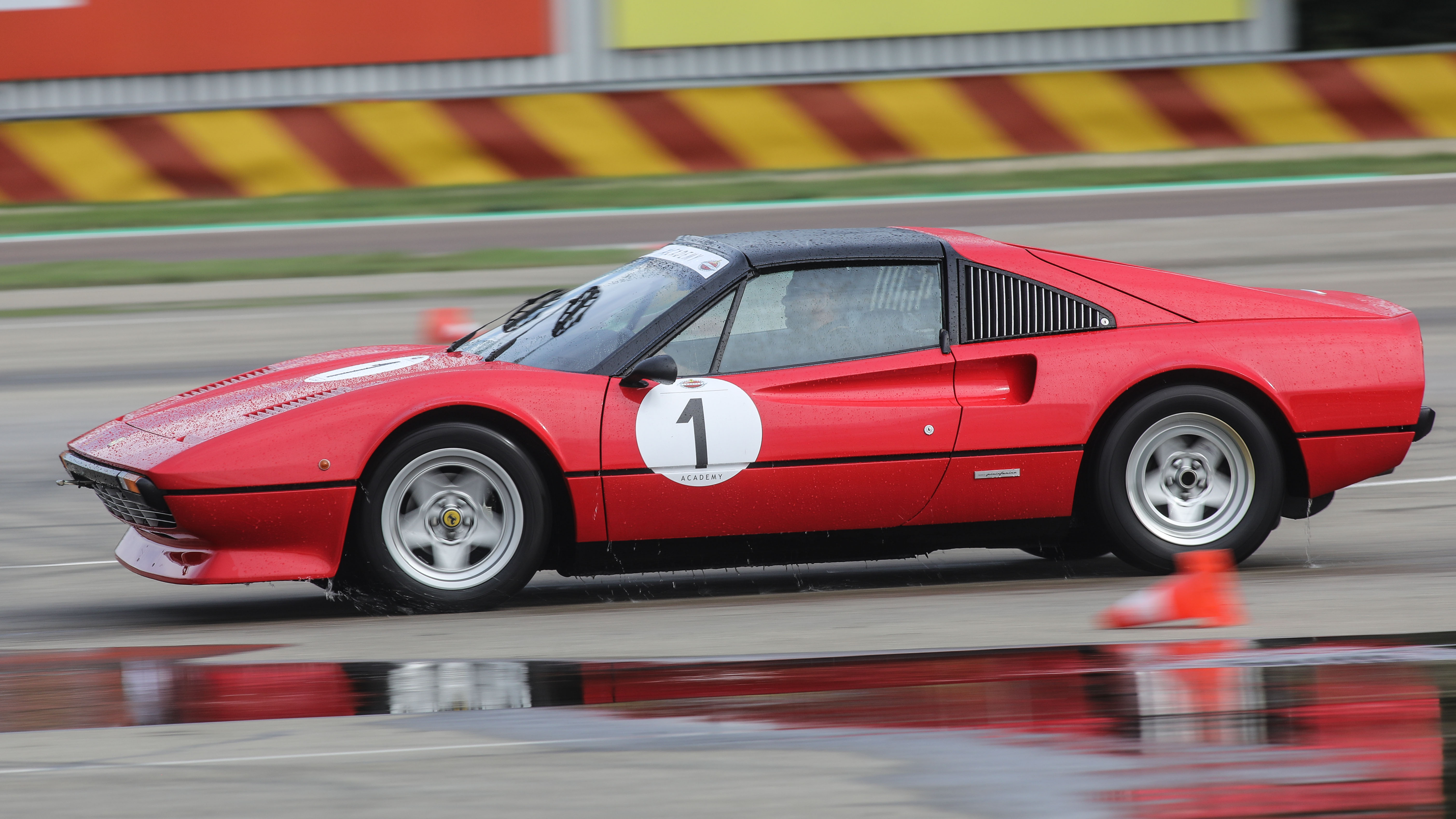 “Today the younger generation don’t know,” he says. A former flight-test engineer, he’s now spent over 30 years at Ferrari, and is in charge of the Academy and its clientele. “They drive easy cars. Maybe their father or grandfather has a big collection that they’re afraid of; a collection of ‘simple’ cars which are loud, which use a manual gearbox and a clutch… they don’t know how to use it.

“I think this is something that can improve the passion of driving. Transfer it to the next generation.” That, in a rosso-liveried nutshell, is the essence. Pass on the torch, so to speak.

To hell with the torch, you might think upon first acquaintance. Especially when there's a whiff of petrol. Get past that, though, and you’re sat at a weird angle in the old Ferrari 308. The pedals are not central but offset to the right. The speedo dial reads out 10kmh… while sat still in the pitlane. The desire to ask a question about how to change the internal mood lighting dissipates upon a first depress of the clutch. Good god the clutch. It’s really quite heavy. So’s the steering. So’s the gear lever.

“Don’t be afraid to really push the gear home,” comes the instruction from our annoyingly cool instructor. Only moments before we’d all been sat in a briefing room, instructed on the nuances of heel-and-toeing and the simple physics behind oversteer and understeer. It all seemed fine. Sat in the bloody thing and faced with the prospect of actually doing it, was a different ball game.

Cars have personalities, right? This one it seems, is in no mood for your nonsense. You play by its rules

A much slower ball game. You notice very quickly that in something this old, time seems to slow down. The gearchange is indeed a tricky b*stard to navigate at first, because it almost doesn’t want to do it; the car staging a protest at ham-fisted attempts to locate second and third (it’s a dog-leg ‘box, so you change up from first into second, and so on), no doubt.

The first few laps are basically just staring at the open-gate gearbox and trying to jemmy the thing into place, occasionally glancing up at, y’know, the road ahead. Not the best strategy for continued existence. You* miss apexes. Braking points. You go slowly to give yourself time. You soon realise that your passenger is probably sleeping/considering what life choices brought them to this particular moment. This is not what one imagined driving a classic old Ferrari would entail. It’s not enjoyable.

*you as in me, not you. You’re probably better than that

And then it dawns: the 308 isn’t there to please you, you have to please it. Cars have personalities, right? This one it seems, is in no mood for your nonsense. You play by its rules. Heel-and-toe on the downshift and suddenly the gearbox wants to play. And once that’s singing, the whole car seems to. Twisting around Fiorano, you feel the balance of that mid-engined chassis, the constant, nicely telegraphed messages from the soft tyres. You start to go quicker. You start to lean on it, feel the suspension heave between fast corners and trust it. You start to… have fun.

It’s not too fast – a mere 210bhp from a 3.0-litre V8 that sounds positively tremendous – which means it’s all manageable. It’s light, too, weighing just 1,286kg. On the road, and with that recalcitrant ‘box sussed, it’s a sheer joy to just pootle along, those tyres and their enormous sidewalls buffeting literally every bump and nuisance out of sight.

Sure, back in Magnum’s day, this was a bona-fide supercar. Today a hot hatch would be on the other side of the country by the time you’d figured out how to downshift into second. But few hot hatches feel this rewarding to drive at such sensible speeds. 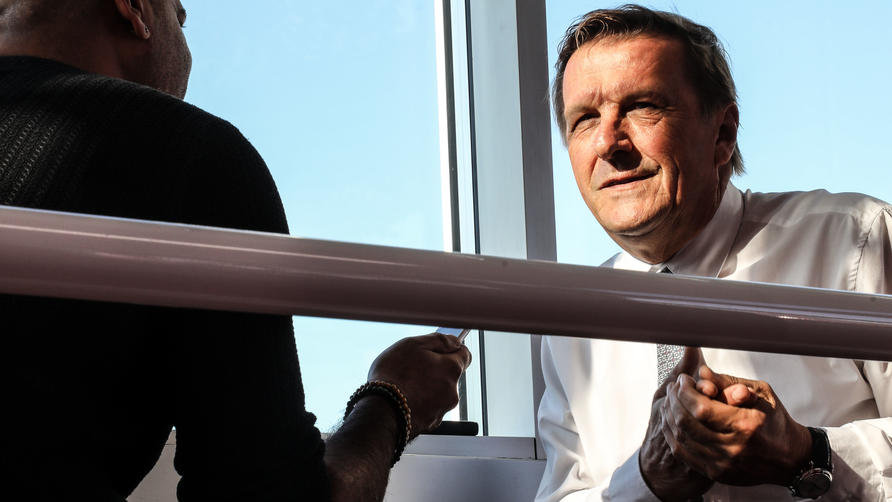 Which is kinda the point of this whole Academy. “You are driven by a car,” Gigi tells me after, noting how modern stuff is a little more cosseting. “In the kinds of cars you get today, you don’t know exactly where you are, or what you are doing, because something is calculated by the car. It’s electronic. Something to give you a false idea that you are a good driver… when you’re not.”

A smirk. “You’re a good driver if you do ten laps of Fiorano in a 308 with a good time,” he laughs. Understandable, really. Jump back into a regular car after something like that and it feels as though you’re literally in the future.

Speaking of which, the Classiche Academy – which costs around €10,000 to take part in, includes drives in not only the 308 but a Mondial, and is open to any customer who currently owns any generation Ferrari – is looking to expand in the future.

“We will add a twelve-cylinder Ferrari,” Gigi says. “I think we will have a 512 TR, for sure, and maybe a 550. A 512 especially has a very heavy engine, so the style of driving is very different. It’s a great experience. I hope the factory continues in this development.”

He pauses. “But I don’t want any ‘electronic’ cars. It has to be pure.” It’s what Enzo would have wanted, at least according to Gigi; the last man left at Ferrari to have worked alongside il Grande Vecchio.

“When I started at Fiorano, I was really just a young boy when I met him. He was involved with Formula 1 and also in the change of the factory due to Fiat involvement. He was not the... racing man that he was before, but if you looked in his eyes the fire was still there.

“He was always curious. The feeling was that he was transferring this driving emotion to me. You have to continue this philosophy."

A final flourish of the hands, and Gigi smiles. “When you feel that the next generation understands this properly, then you can go. Because the dream continues.” 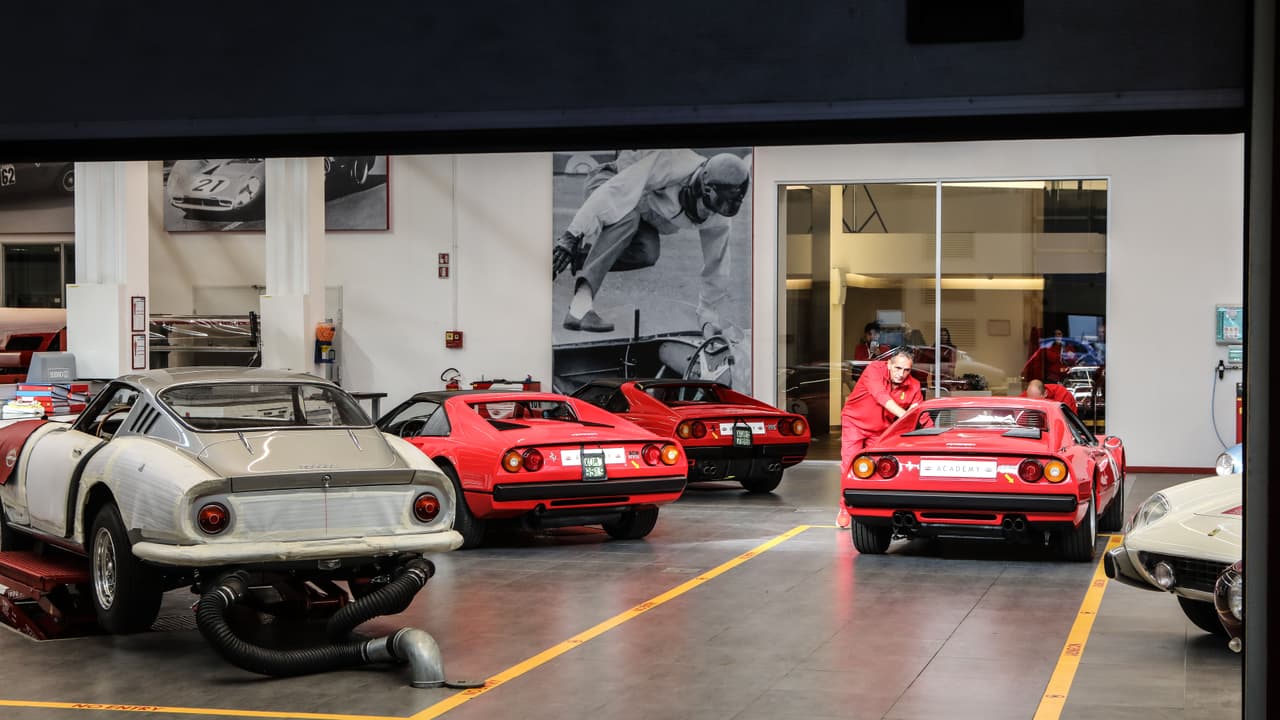