Who wants mundane? We’ll take a genetically modified mutant over something mass produced any day

Supercars are dead to me. Sports cars might as well be wheelbarrows, hot hatches roller skates for all I care, because I’ve just done a massive four-wheel drift in a Prodrive BRX Hunter and then run it up through its sequential gears as hard as I possibly can, twin-turbo V6 bawling away by my right knee. An experience every bit as singular as it sounds. Each gearchange is loosely connected to a whipcrack of fiery side exit exhaust flame even though there’s enough rain to be bouncing vertically back up from the tarmac, and yet the Hunter does not care. The Hunter is setting fire to the rain. Pyromania with the help of some violently toxic £3-per-litre fuel with an octane rating somewhere in the ‘jet’ range, yes, but by crikey, there’s not a car here – and I include the Lambo STO and Ferrari SF90 in this – that will make you vibrate with life quite like a full-fat Dakar buggy and room to play.

The best bit is that the Prodrive machine isn’t the only lightly psychotic thing currently circulating, either. Slipping neatly under the Hunter’s ‘concentrate or die’ delivery is the Bowler Land Rover Defender, an off-road race-fettled Defender 90 sporting a stripped interior, FIA roll cage, rally prep bits and a 2.0-litre petrol engine tuned to 300bhp. Yes, it’s a lesson in power-on understeer on a biblical Dunsfold, but throw it around in the margins of the track in wet, three-foot-tall grass and mud, and it’s got such confidence it makes a hero of the underskilled and over-egoed. This is a track car with less race and more farm. But it’s also a cinch to drive, and comes with a plug ’n’ play competition package attached. But more on that in a bit.

Before we get there, there’s one more ‘off-roader’ to introduce to our little party: the Morgan CX-T. Yes, it’s a Morgan, with all the olde worlde charm that seems to entail, but this time it’s a Plus Four given a Safari Rally treatment. Or, perhaps more appropriately, an overlanding makeover. No roof tent at the moment (although one can be fitted, apparently), but there’s long-travel suspension, off-road tyres, wildly different suspension kinematics and a whole SAS supply drop bolted into the rear section. It’s polite, posh and rugged. It’s basically Bear Grylls with knobbly tyres. 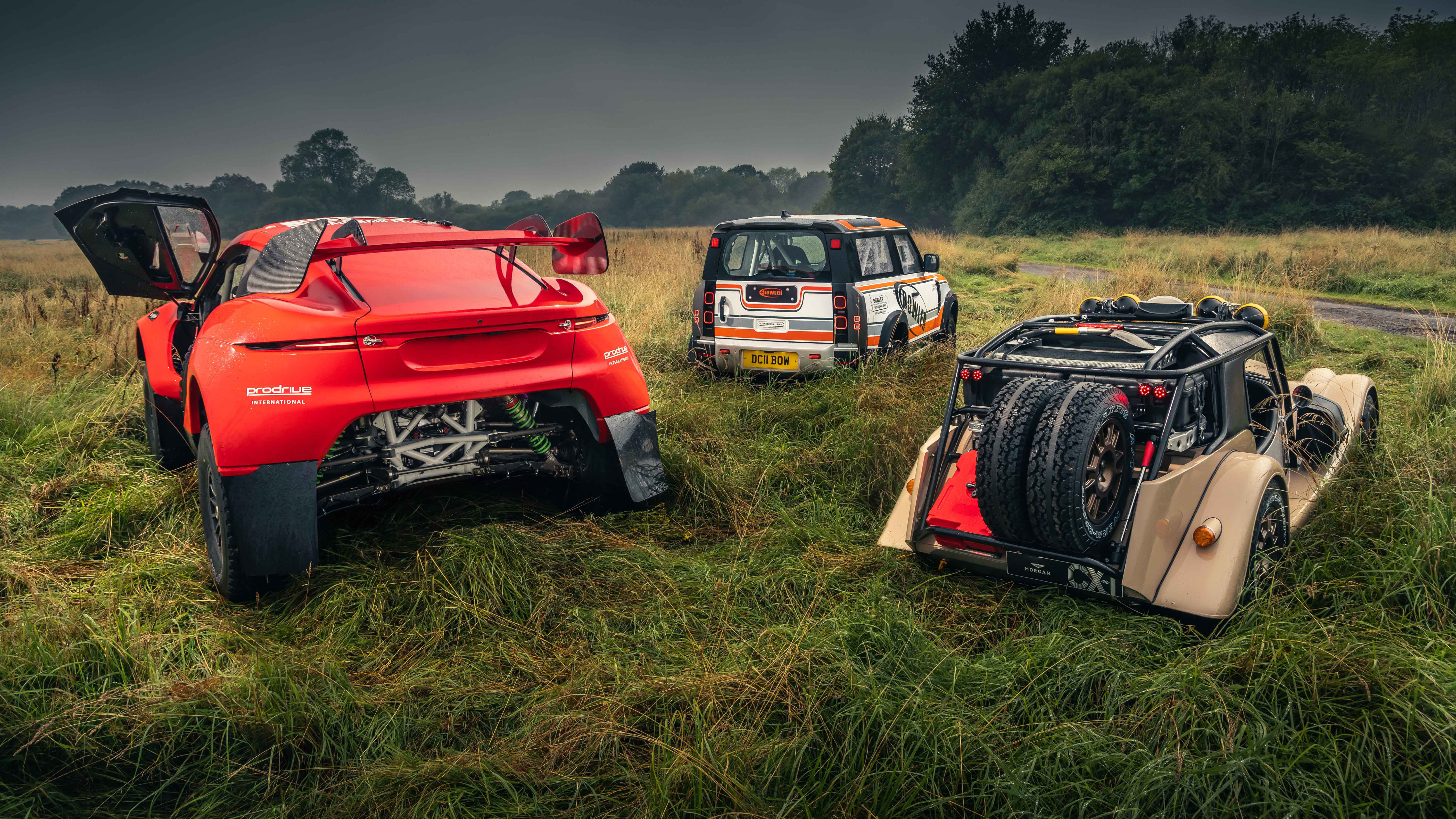 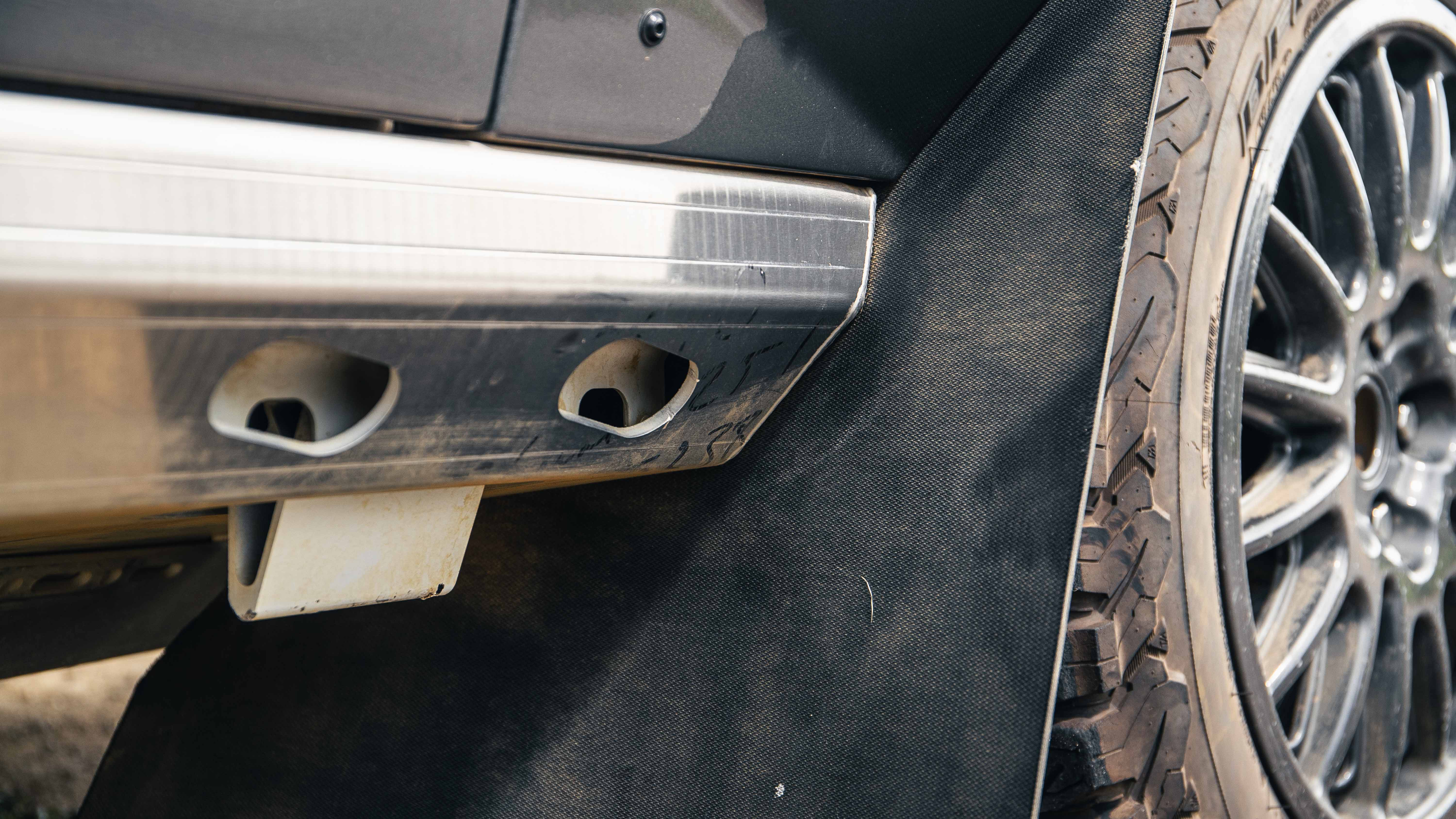 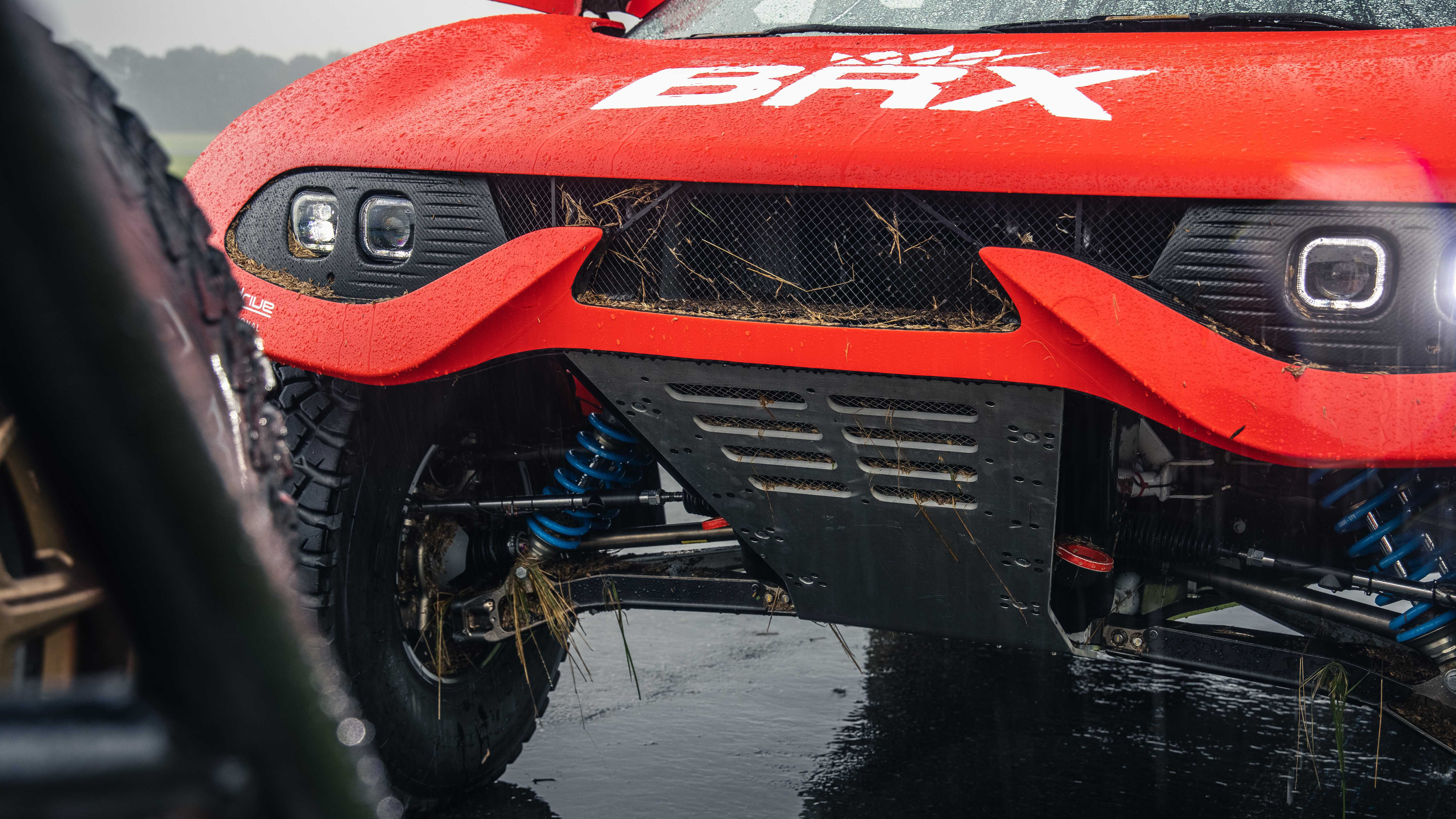 As you can probably tell, it’s a good group to get to play with. I am not unamused. There’s probably a bit of background needed on each one though, so we’ll start with the Big Red Bus. Officially called the Prodrive BRX Hunter T1+, the BRX T1+ is an updated version of Prodrive’s original BRX, massaged to compete with new Dakar rules. Compared to the original, it’s 300mm wider, runs 37-inch tyres on 17-inch wheels (versus 32s on 16s), and has 350mm of suspension travel courtesy of eight sets of bypass dampers (two on each corner).

The body is still by Ian Callum of Jaguar fame, and it’s eminently more purposeful with the bigger wheels and squarer stance – as well as a new, meaner, quad-eyed face. The chassis is a spaceframe with a carbon monocoque seemingly grown around it like a tree around a fence post, and the bodywork is artfully competition-flimsy. It’s also a bit disconcerting – get up close and it’s simply massive, and what look like intakes in the rear three-quarters are in fact spare wheels bracketing a 500-litre fuel tank. And yes, you did read that right. The 400bhp Ford EcoBoost twin-turbo V6 nicked from the Raptor is mounted under the windscreen half in, half out of the cabin, and one of the sidesaddle turbos nestles against your knee, separated only by a thin skin of composite. The cabin gets very hot. The air conditioning was inoperative. I was sweating like a horse.

Only partly because of the heat: there’s a huge amount of intimidation when driving a full-on racecar of any stripe, but Dakar gear is on another level – so many systems, so many buttons – it’s more like a helicopter than a car. Add to that a seat that was bolted up for the BRX’s current pilot, the 6ft 5in Nani Roma, and it felt like trying to drive my dad’s car at 14. But essentially, once you’ve primed the fuel pumps, switched on the ignition, fired it up and figured out the sequential box (back for up, forward for down, button push and flick for reverse), it’s... not that difficult to drive. The steering is horribly light and numb, a bit like a forklift truck – which is good for desert bashing, but less so for tarmac feel – and there’s a terrific amount of transmission shunt as the various diffs and drivetrain elements sort themselves out, but once you’re going, brutal is key. The Hunter works best at 100 per cent commitment. At which point every nerve comes alive and you explode with joy.

It isn’t a car you drive with your mind, this. You can’t overthink anything – you just commit, and ride it out. The body is super stiff, but the suspension is long and then tightens as it reaches towards the ends of travel, so as long as you keep going, direction gets sorted out. And then you’re in a weird world of understeer that can be rotated away with more throttle, at which point the BRX just sits in a stock-straight four-wheel drift. All four wheels clawing forwards, but moving 35° from the direction of travel. It’s disconcerting, awe inspiring, and horribly addictive. After that, physics just seems to get bored of trying to influence what the Hunter is doing, and just lets it freestyle. Off-road? I can’t even begin to imagine – but rollicking across a wet field made me laugh so hard my eyes were watering, so barrelling around the Empty Quarter would probably see me off. And yes, there is a ‘civilian’ version on the cards for around a million quid, but I can’t see it being road legal. Still, what a thing. If you live in Dubai.

The Bowler is altogether more recognisable, but I have to say, nearly as much fun in a much more approachable package. Probably because it has that familiar air. This is a Bowler Defender Challenge car, a rally series intended as a feeder stream for endurance rallies (like the Dakar), and Bowler offers racing packages for both veterans of the genre and complete novices, with full support. The car itself has that 300bhp 2.0-litre turbo petrol, four-wheel drive and lots of race upgrades – from the FIA full roll cage, to thick aluminium underbody protection that stretches all the way underneath the car. There’s a plumbed-in fire suppression system, race seats and a competition-style single paddle on the right-hand side of the race steering wheel for the eight-speed box (forward for down, back for up), extra lights... the works. And the seven races in the Challenge weigh in at £99,500 including VAT for a package (you own the car), with extended ‘turn up and race’ packages available for extra cash.

Now, motorsport is never cheap, but that sounds like a bit of a bargain – the Bowler is a proper toy. No, it’s not going to make your heart vibrate like the BRX, but it’s the first rung for serious off-road racing. Responses are positive, the engine is surprisingly zingy and again, you have to be slightly brutal to get the best out of it. It’s noisy and stiff, but once you get used to just flinging it at geography and letting the car do the work, it becomes the black Labrador of off-road racers: always hungry, a bit daft, faithful unto death. For preference I’d probably set it up a little softer at the back, but without trying it properly off-road, it’s hard to judge. But I guarantee that anyone that enters the Challenge will not be disappointed – Bowler makes hardy kit, and the Defender feels exactly what it is – a Dakar lite. Perfect.

To drive, it’s actually much, much better than a Plus Four. Sorry, Morgan

The Morgan CX-T, on the other hand, isn’t meant for serious off-roading, but it’s even more amusing for that, and by no means incapable of withstanding abuse, given that I drove it at 50mph straight into a field of 3ft high grass and became Malvern’s first combine harvester. Admittedly one of the triplet of windscreen wipers immediately fell off (that’s ‘character’, that is), but the chunky Morgan rode some pretty big bumps without bottoming out, and skidded around on track like a pro. In the dry, at least. In the wet, with a loose diff, it was largely lethal. But weirdly, that kind of adds to the appeal. The body is the latest aluminium effort which is apparently 100 per cent stiffer than its forebears (that’s the ‘CX’ part of the name) with the ‘T’ standing for ‘Trials’ – a randomly niche kind of off-road autocross.

Built by a company called Rally Raid UK, it’s not a show-pony: redesigned suspension with 140mm of rear travel, longer suspension arms, rally damping, wider track widths, comprehensive underbody protection, external roll cage – it’s got the lot. It’s also still got the Plus Four’s BMW-sourced 255bhp/258lb ft turbo and six-speed manual, but this time attached to the locking rear diff from an xDrive BMW – though it didn’t appear to be working, something I noticed while merrily pirouetting through Chicago corner. To drive, it’s actually much, much better than a Plus Four. Sorry, Morgan. Probably not as outright fast, but there’s still more than enough power and reliable grip, and it’s generally amusing at slow speed, even on tarmac. Off it, it’s hilarious. Yes, it’s still cramped, weird and uncomfortable, but what price this amount of glorious eccentricity? Well, £204,000 actually, which is not to be sneezed at. But when you consider that it will be more fun to use 95 per cent of the time than the £250k Ferrari or Lamborghini, it feels like the compromise might be a good one. Plus, it’s kind of rakish, where a supercar makes you look a little underfunded in the confidence department.

The thing is, none of these cars are sensible, but they make all sorts of sense. Other cars are faster and more usable, probably have more instant cachet and Instagram likeability, but they just feel a bit... vacant, next to this lot. These three don’t do it for what it looks like, they do it for what it feels like. They are not fragile, or theatrical for the sake of it. Because if you want to laugh out loud, really make an impression with driving rather than just speed, you need something altogether more complicated to process. You need to get with the freaks. 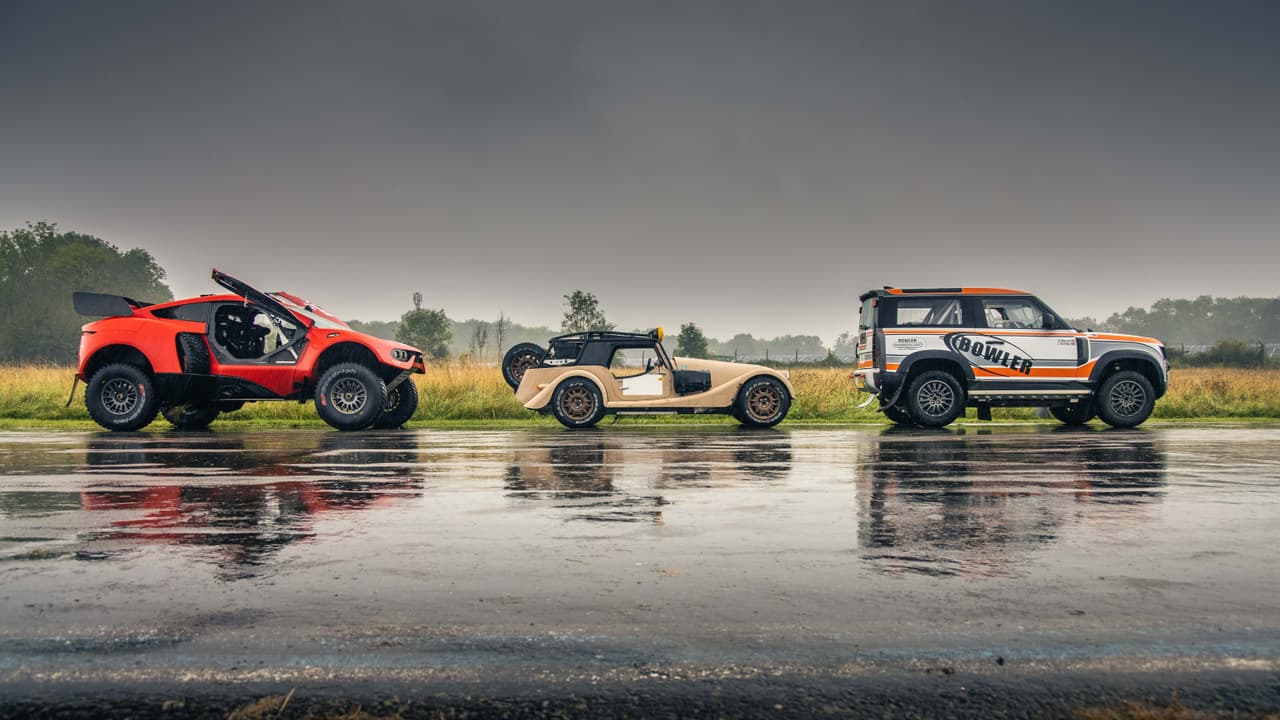