A Citroen DS is perhaps not the most obvious car you’d find inside Alfa Romeo’s Centro Stile HQ, and yet, here we are – only it’s tattooed onto the arm of the man standing in front us.

Said arm – and tattoo – belong to Alexandros Liokis, senior exterior designer at the Italian brand. Why a Citroen DS? Back when he was 13, he bought an abandoned one near where grew up with his twin brother, in preparation for their 18th birthday and being able to drive. Two years and a full restoration later, it was ready. “My car design experience started here,” he says, pointing to the tattoo, and they even still have it today.

It’s not his daily, though. That honour instead goes to a first-generation Renault 5 from the Eighties. And that’s just the start. A keen classic car collector and photographer outside the design studio, the man lives and breathes all things automotive. We approve. 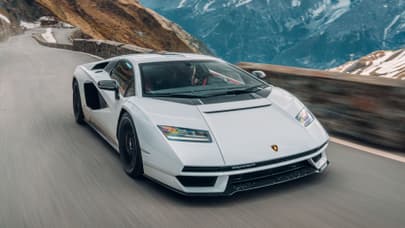 Safe to say, drawing has never been one of my fortes, and yet here I am alongside the man whose job it is to make Alfa Romeos look sexy. Born in Greece, Alexandros moved to Italy in 2011 to learn his craft, where he was asked to submit a concept to Alfa Romeo. His Giulia concept starred at the Geneva Motor Show in 2013, and since then his fingerprints have been over the Giulia, Stelvio and lately as lead designer, the Tonale. 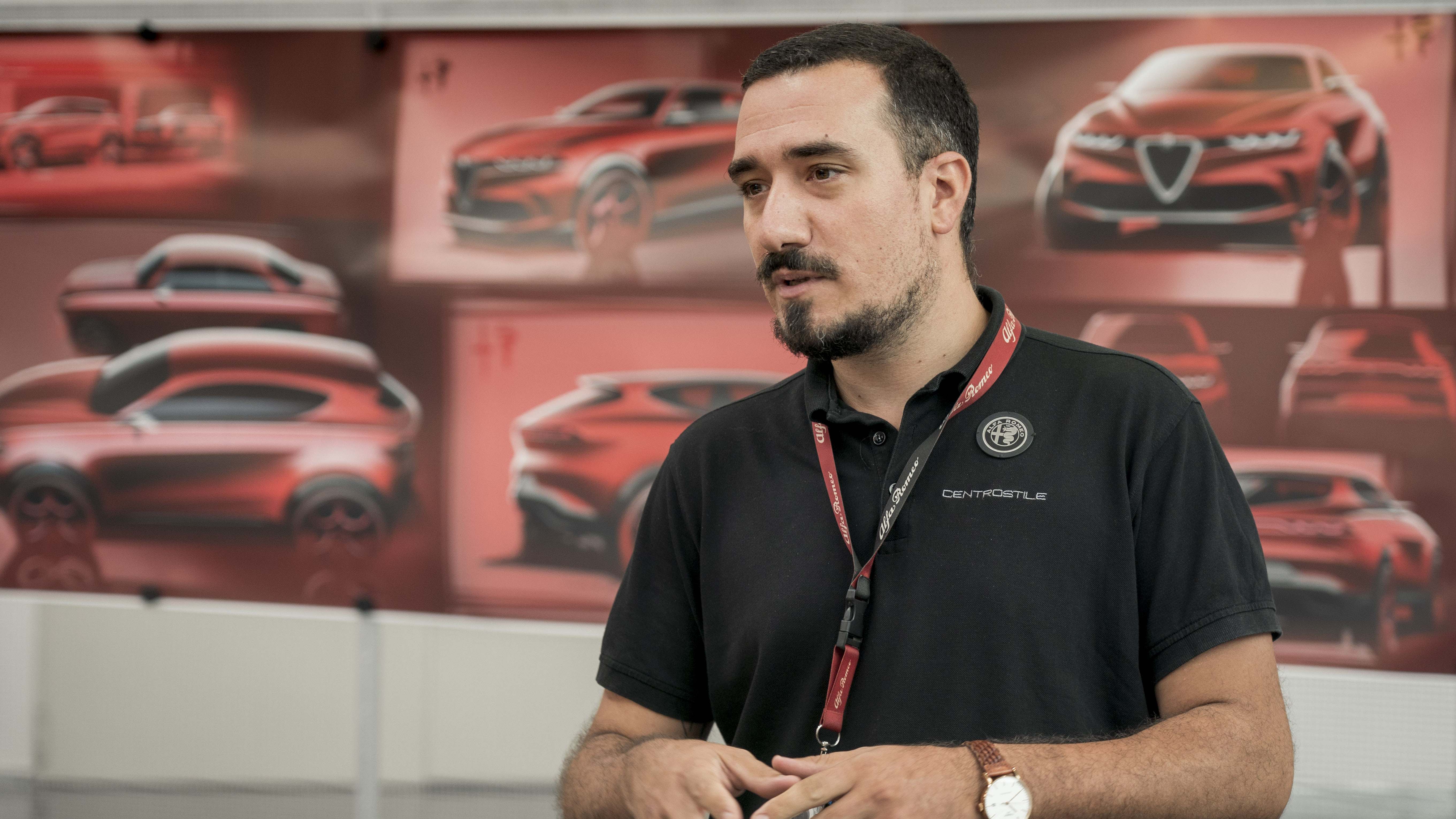 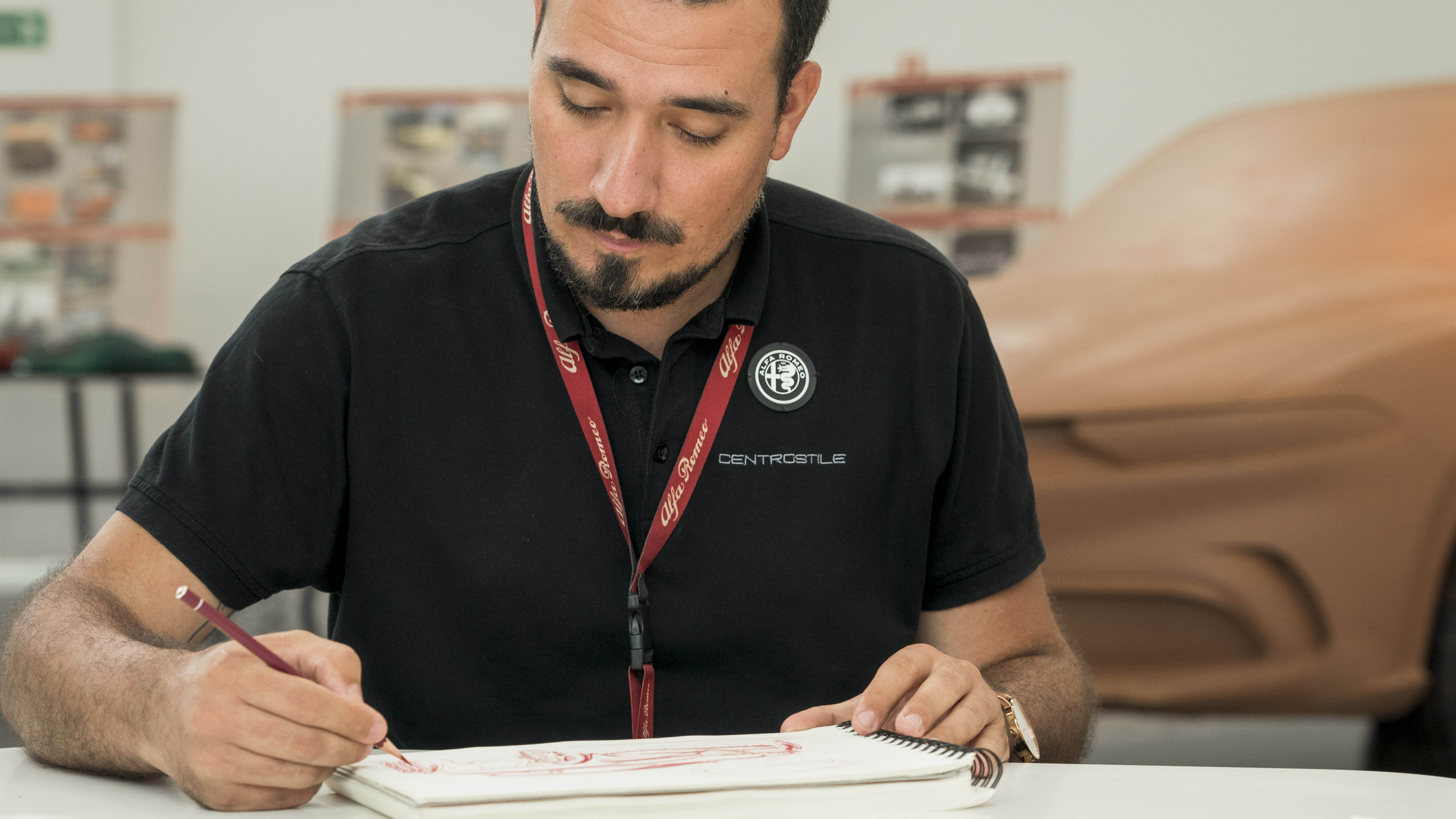 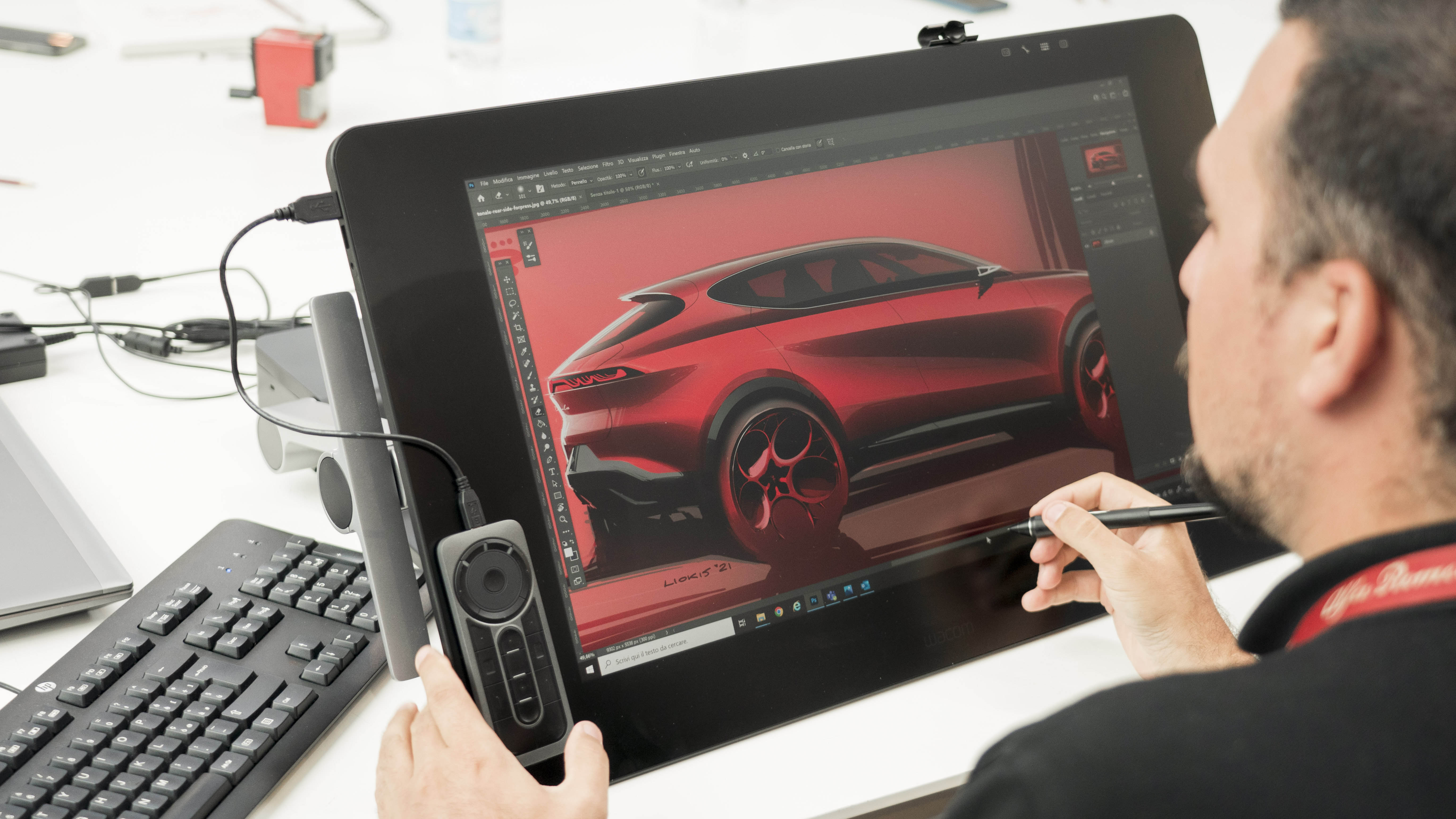 Better listen carefully, then. We’re told to warm up by drawing straight lines horizontally from top to bottom of the page. Easy enough you’d have thought, right? Seemingly not – Alexandros says he spent the first two weeks at design school drawing straight lines and circles, and it shows. Looks like he’s going to have his work cut out.

Our task, it turns out, is to replicate Alexandros in sketching the Tonale. He instructs us to draw a rectangle in the middle of the page and then divide it down the middle, before we add the wheels, followed by the famous scudetto. Then, it’s a bit like drawing by numbers, and as we follow his instructions, slowly but surely the car begins to take shape. It’s not perfect, the proportions are a bit out – Alexandros points out mine looks more like an SZ, one of the weirdest looking Alfa Romeos of all time – but still.

He moves on to illustrate how to add emphasis, reflections and shading using a desktop computer complete with €2.5k pressure sensitive touchscreen – key talking points when it comes to selling an idea to the bosses. It’s clear to see how technology such as this has sped up the design process, allowing for quick fixes and modifications without have to scrap any sketches and start all over again. Alexandros can spend up to 12 hours a day drawing, but tries to stick to three hours per sketch “to avoid it becoming overworked”.

Next, we’re introduced to Lorenzo Sibille, who is to clay modelling what Gordon Ramsay is to cooking. He’s stood next to a full-size replica Tonale made of 200mm thick clay, which sits on a bed of foam on top of a rolling structure. Lorenzo talks us through the tools used, demonstrating how a Surform file (clay shaver, in other words), is used to roughly work the clay into the correct angle, before spatulas, ranging in size and flexibility, are used to add definition. It’s a messy job, no question. 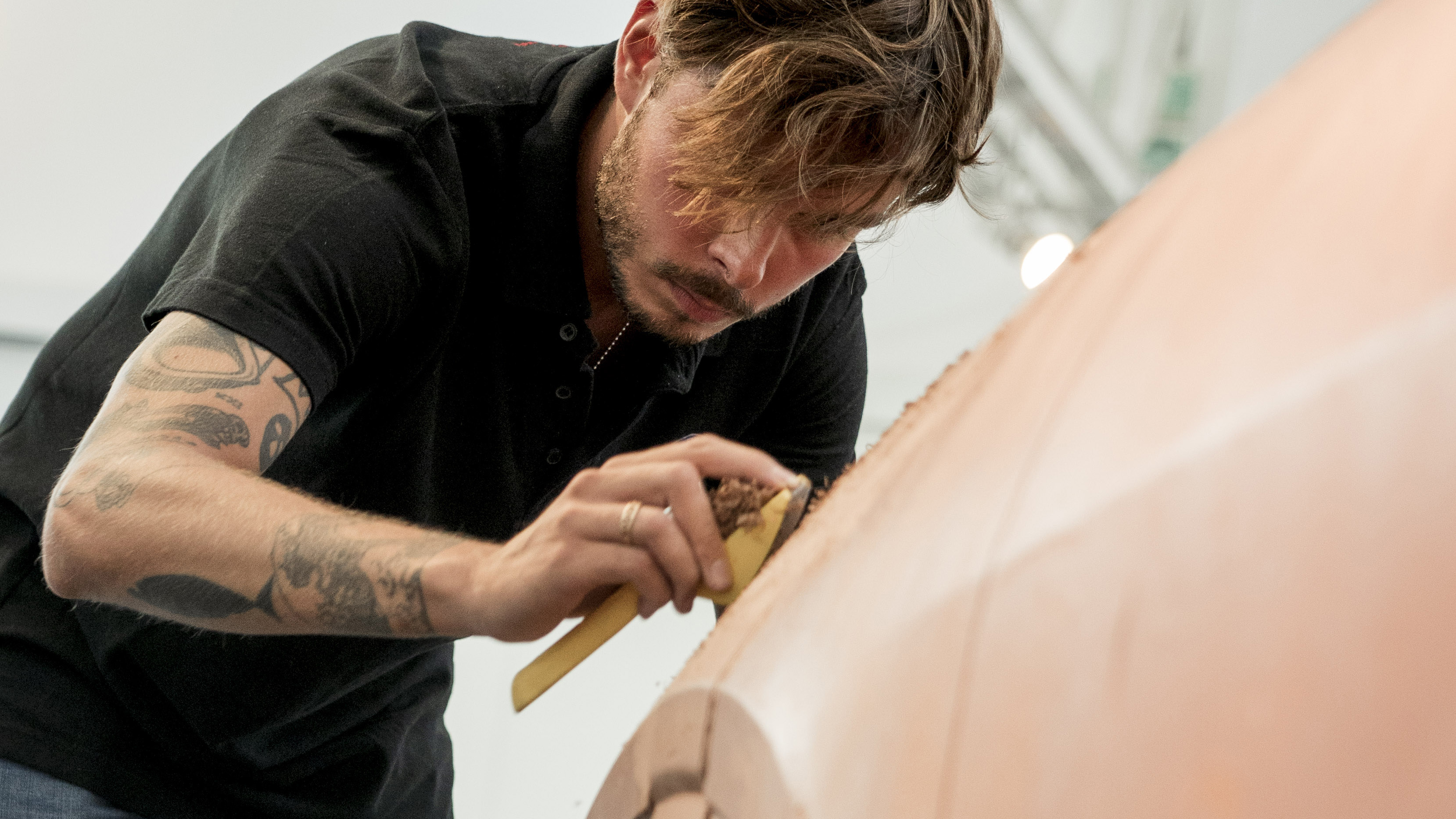 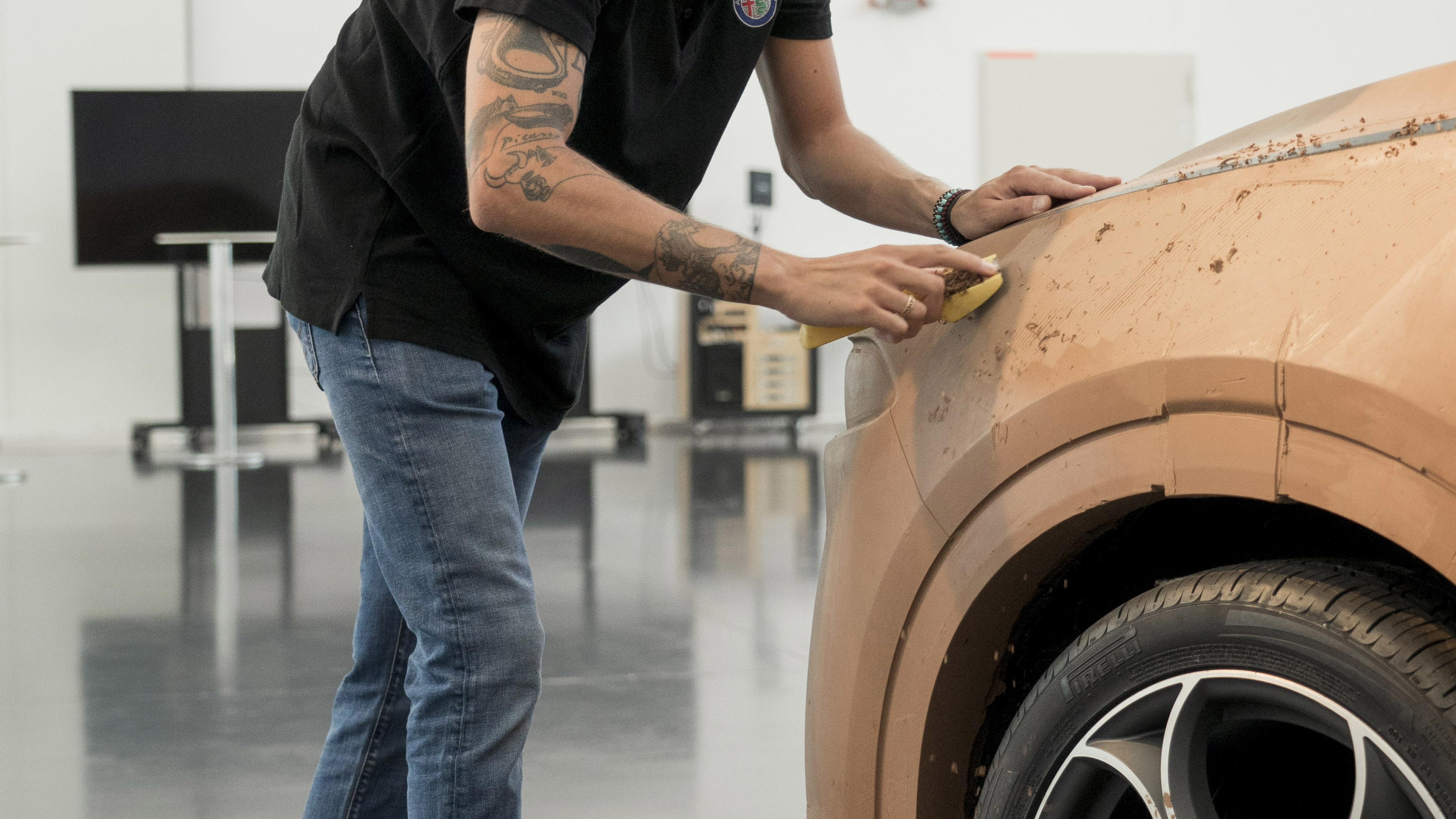 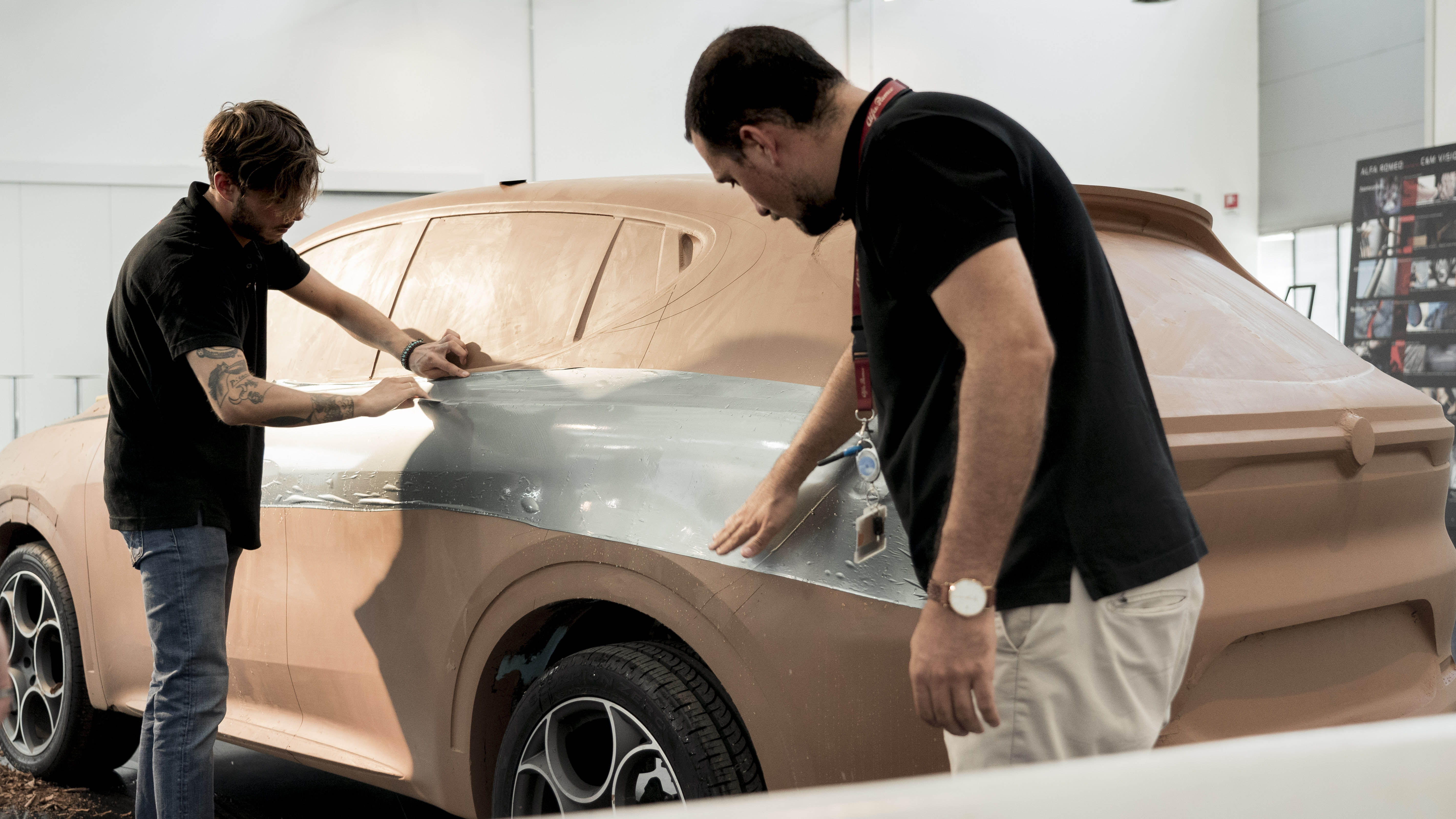 Then it’s our turn. Alexandros notes it’s one of his favourite parts of the design process, and it’s certainly therapeutic and addictive working the clay into the desired shape. A knife is used like a pencil, enabling the designers to direct the clay modellers, while tape is used to define any shoulder lines, as Alexandros’ vision comes to life. Talk about job satisfaction.

Clay has one major drawback, however: it’s a very matte surface and doesn’t show reflections. This is where clingfilm-like plastic wrap comes into play. When applied it enables the designers to analyse whether the reflections are as desired, while also showing any imperfections invisible to the naked eye. Apply, admire, and re-apply as necessary.

The clay model generally takes two to three months to complete, with a 3D scan taken and used to ensure symmetry between the sides. It’s then either stored in case it needs a rehash at facelift time, or fully recycled.

Playtime over, we meet Alex Perez, boss of interior design, who learnt his craft at Seat. “I thought I'd stay three, maybe six months, but that became more than 10 years,” he admits. After dreaming up the Cupra brand, he jumped ship to Alfa Romeo, and with it, a completely new culture in Italy – though he admits he’s more of a hot chocolate than coffee drinker, much to the disapproval of his new peers.

“Italy is a wonderful place, I love it. It's very important when I leave the studio to travel, to meet the people that live here, to understand why they are passionate about Alfa Romeo.

“At the end you are creating a product that is a very emotional product. That is one of the big questions of design: why people love particular objects? That's something you cannot teach at university but it's something that you have to nurture somehow in your working.” 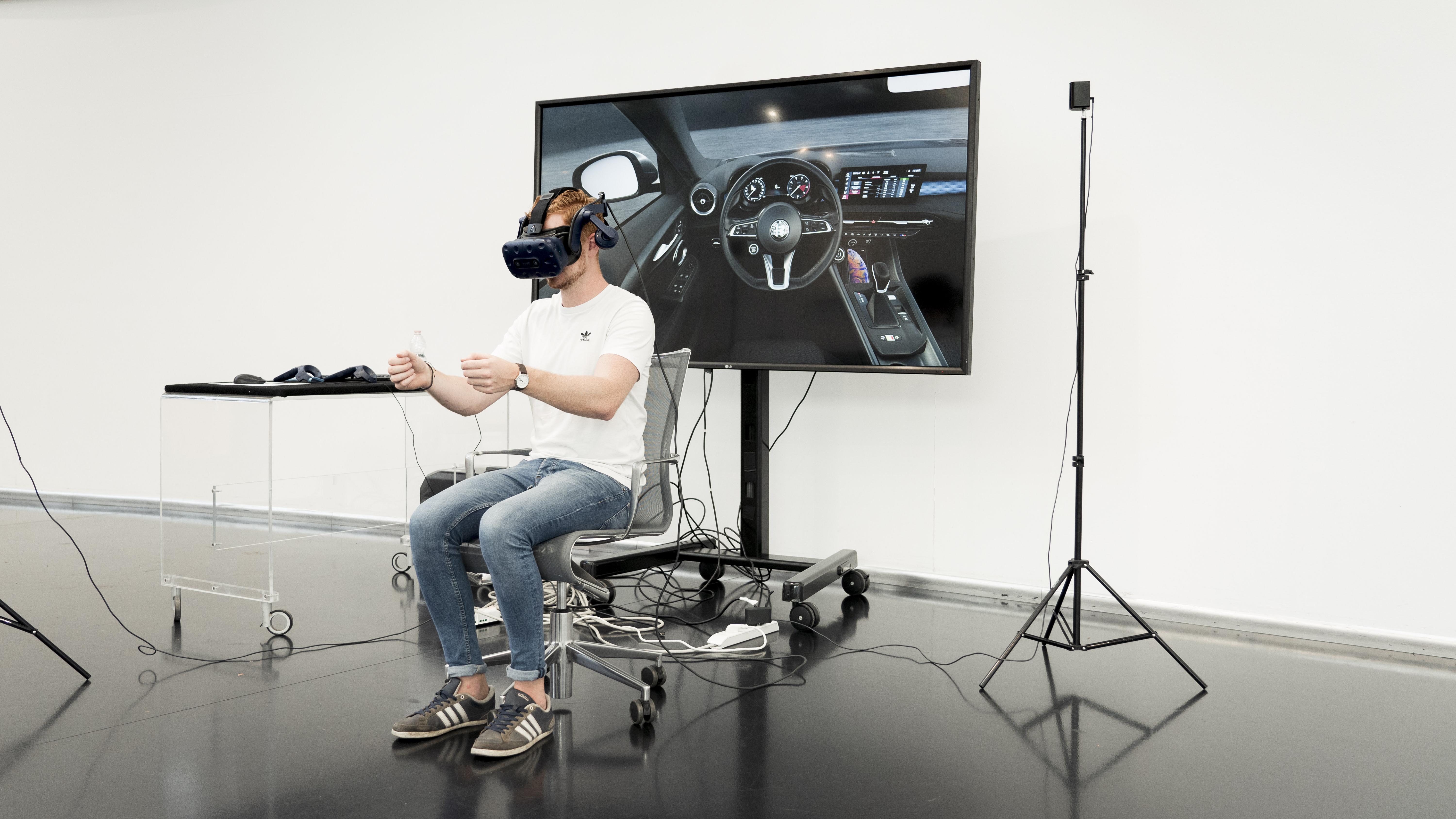 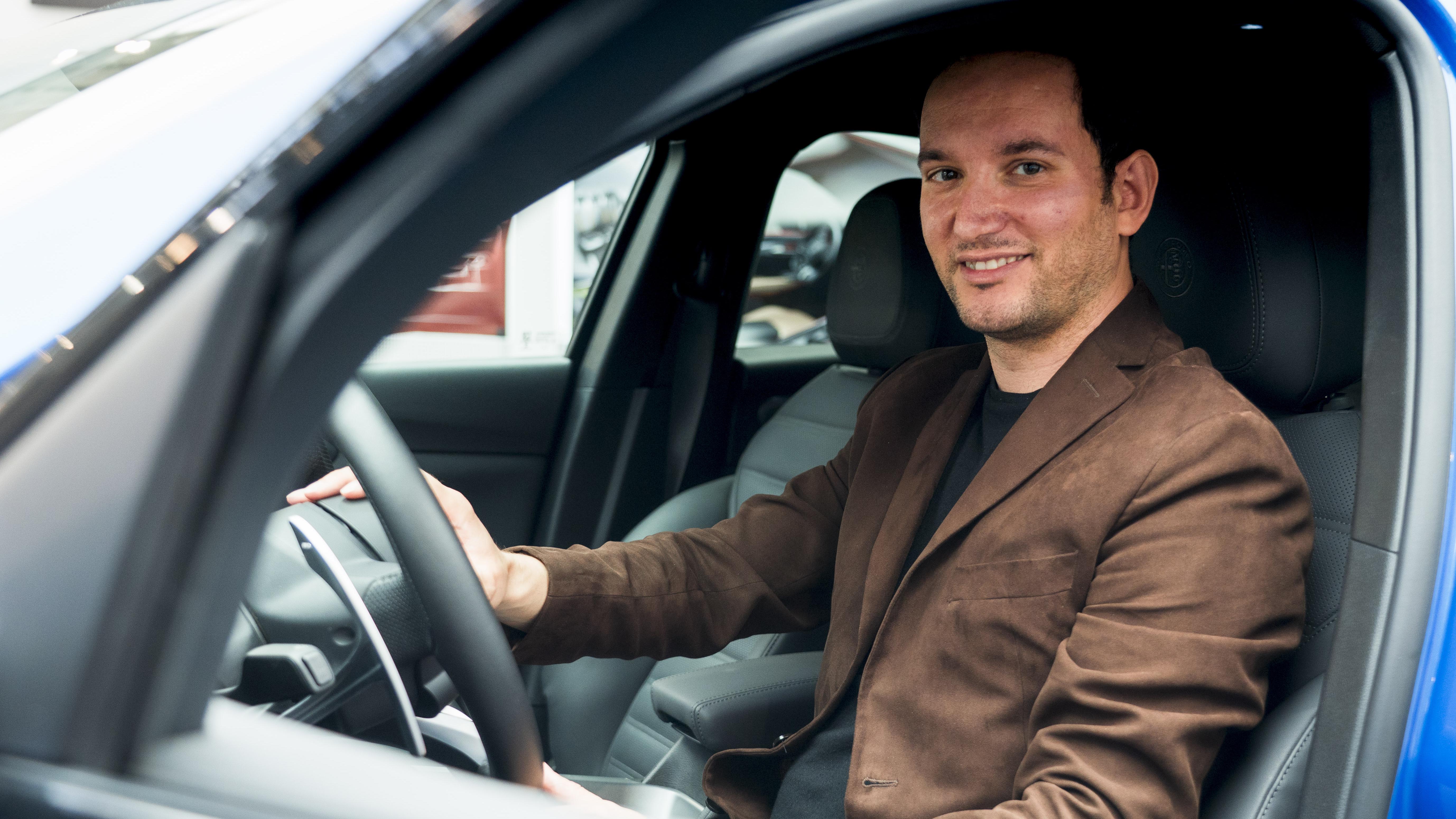 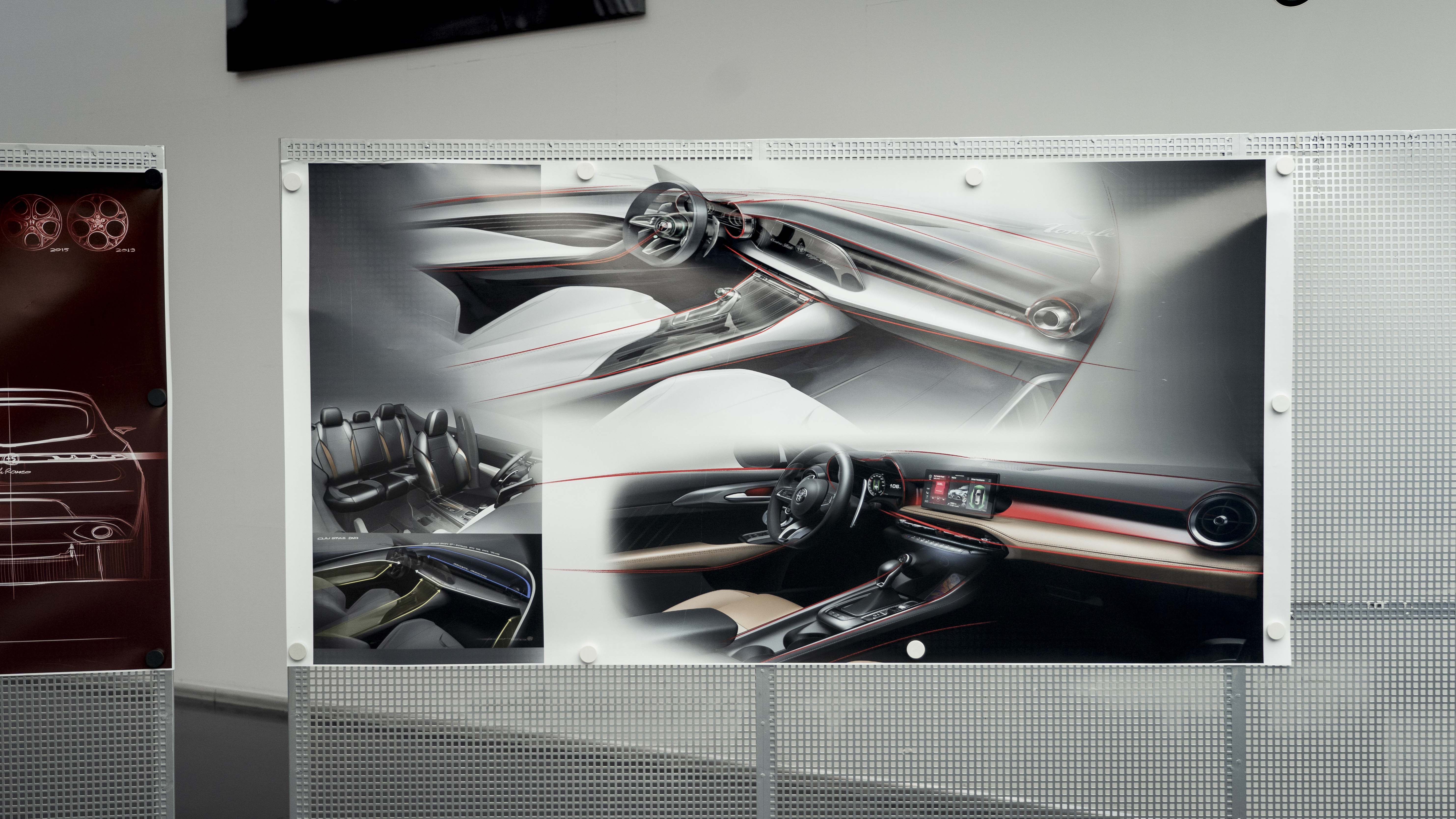 Alex takes us through how tech is changing the way he works, particularly virtual reality (VR), allowing his ideas to come to life in a computerised world. With the VR headset on, I’m transported into a 3D world set inside the Tonale. This recently developed tech is hugely beneficial to designers, as it “allows you to spot things that you wouldn’t have otherwise seen on a flat screen”, says Alex. And, as it’s computer-generated, it also means you can easily make modifications, saving time and money in the design process. Win-win.

Having only joined Alfa Romeo a year ago, Alex admits that he didn’t have much involvement in the interior design of the Tonale which was already well underway, but that he’s already thinking of ideas for when the facelift is due a few years down the time. “Design is not something you finish and it is the perfect design and you put it in a box and lock it away. It is constantly evolving.”

Finally, it’s off to meet Elisa Nuzzo, colour and materials lead, and Luca Sardone, research and innovation designer. After a decade at Maserati, how does Elisa think this new era of electrification will affect Alfa Romeo?

“It’s a huge change for the brand. Driving components used to play the leading role inside, but when we looked at the market we noticed many brands are changing their approach, with the focus now on being facilitators and taking people from A to B,” she says.

“This will never happen to Alfa Romeo. Being inside a car should still be about wanting to drive it. The new interiors will probably be more minimalist.” Let’s hope Alfa Romeo’s learnt from Volkswagen’s shortcomings, then. 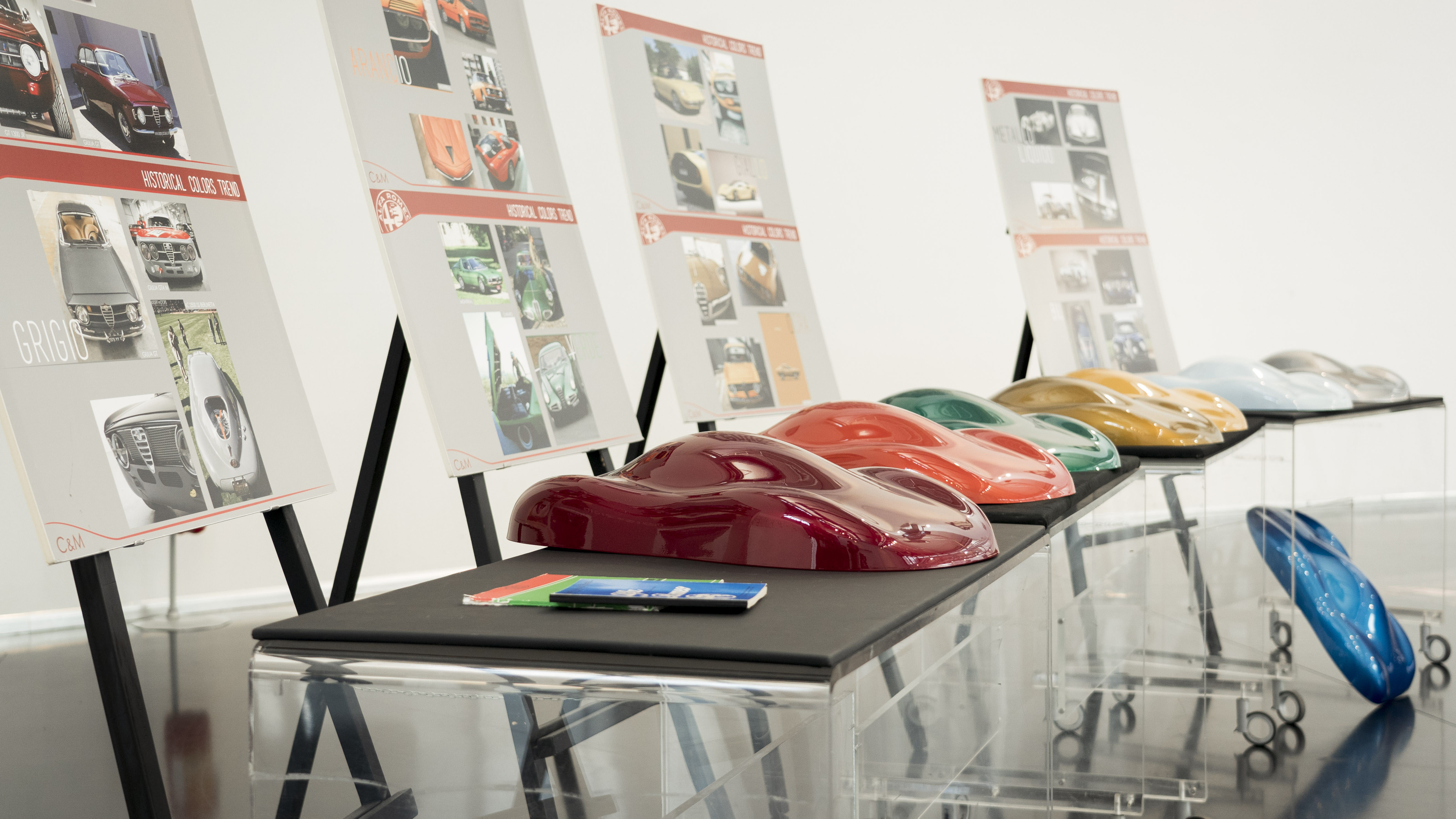 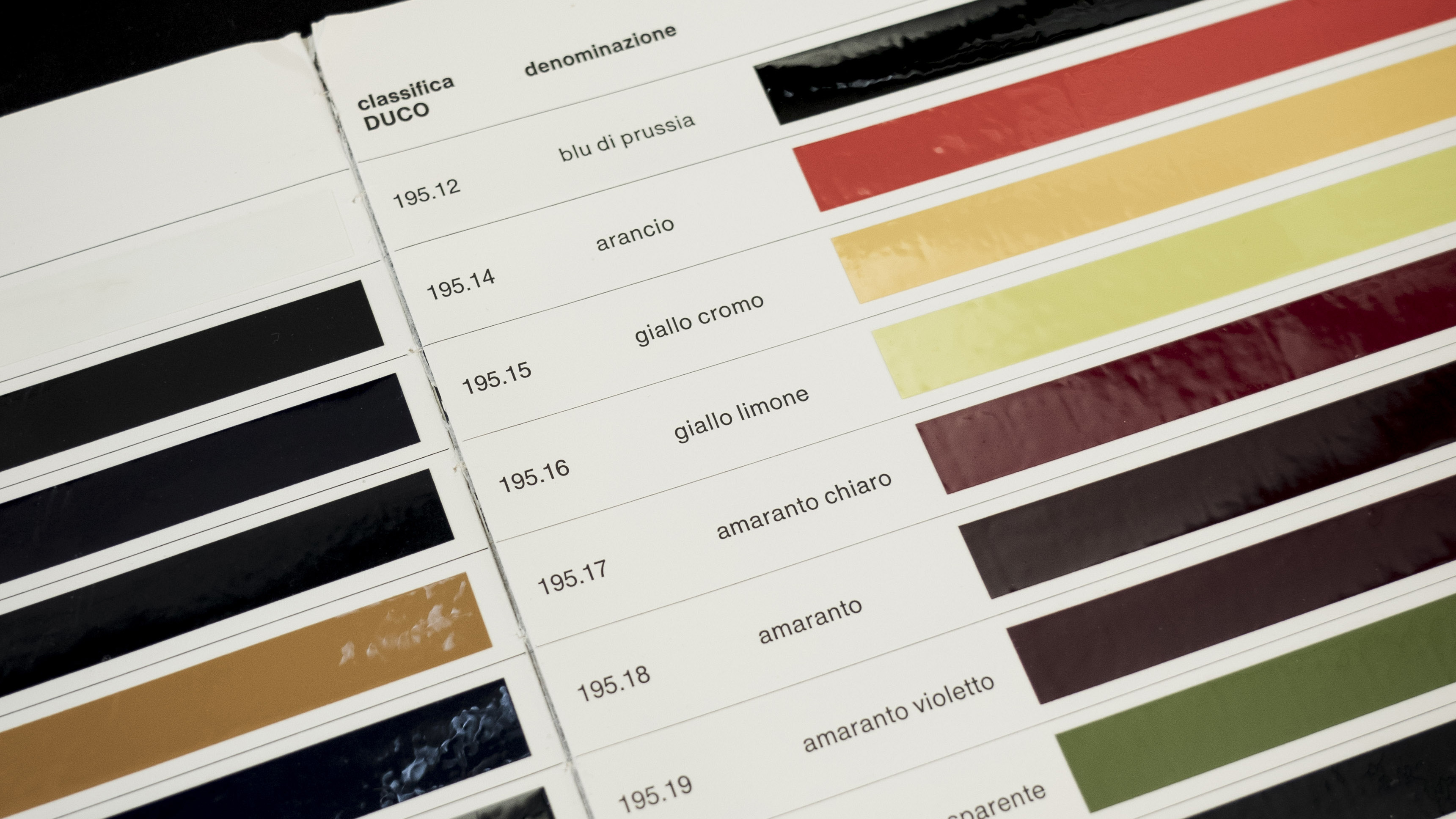 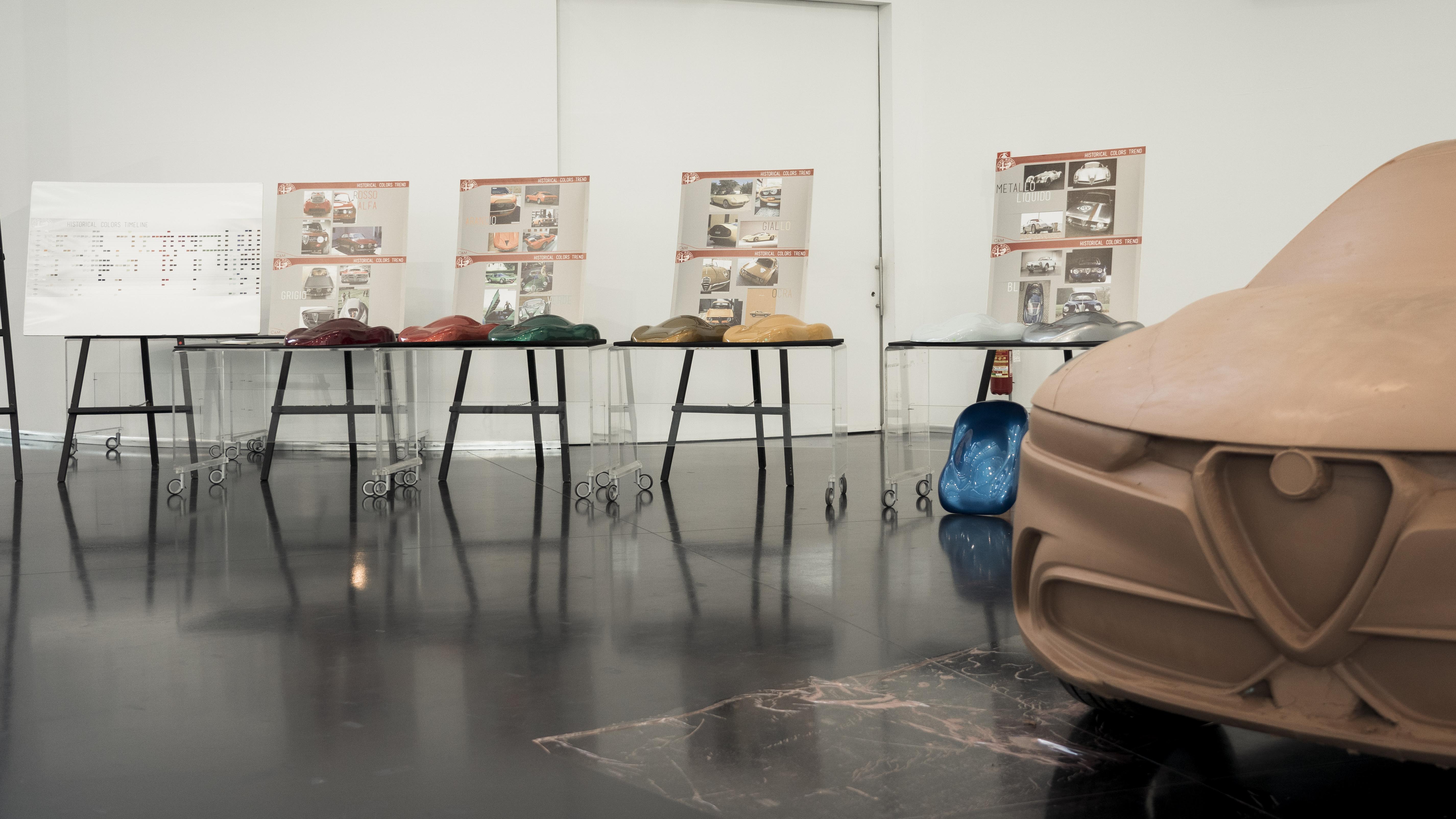 Much of the focus is on bringing the decorative and practical side of materials together, with textured paddle shifters used as an example for their aesthetic and functional ability. Inspiration is being taken from the wider world around us – 3D knitting in the fashion world for example – and how this can be transferred to the world of interior car design.

But what about colours? We’re shown a timeline that illustrates the wide palette that used to be available, especially compared to the present day, with Elisa going to on explain how she and her team have set about recreating them in “a modern way”.

“With this green,” she says, pointing at a scale model, “we wanted to try to capture the colour of speed, the reflection of light when you take a picture of something running fast. You cannot properly describe it, it's just a flash of light.” If you like.

There’s an obvious challenge, however – in the UK, grey was the most popular new car colour for the fourth consecutive year in 2021, followed by black and white. How does Elisa overcome that? “We’re stubborn. We’ll keep working on it.”

It’s been a whistle-stop tour, and one in which I’ve no doubt we’ve only just skimmed the surface. Delving deep inside Alfa Romeo’s design HQ has been an eye-opening experience, and one of the biggest takeaways of the day is how much pride, but also pressure, those working here feel. Given Alfa Romeo’s rich design DNA, I’m not sure I’d be up to the task, but it appears in safe hands. And with that, I’m off to scrub the clay from mine. 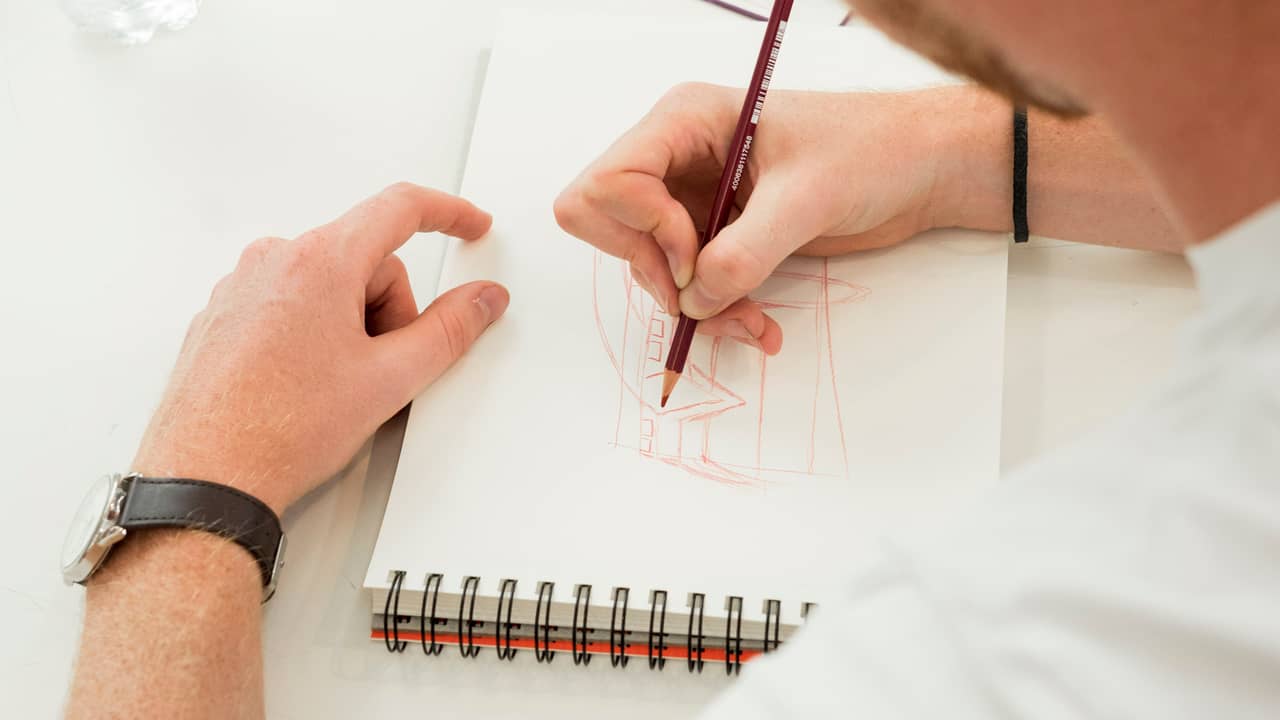