It’s the upper steering column housing. I’d been looking for a way into this story to try and encapsulate the astonishing attention to detail in a relatable way. So here we go. As far as possible when you order a car from Eagle, be it a restored E-Type or a rebodied special like the Lightweight GT you see here, pieces are salvaged from an original car. The housing is probably rusty, so it’s aqua blasted (not dry blasted, as that’s too harsh), stripped back, made good. But after 35 years at this, and with a factory full of specialist craftsmen, Eagle knows more. It knows the mounting points where the housing connects under the dash flex and, in time, crack, so extra welds are put in to strengthen it.

It also knows that back when it was first made, Jaguar cut incision slots in the tube to make it easier to clamp tight against the plastic bushing through which the steering column itself rotated. But that plastic bushing is too soft, so it wears. Eagle replaces it with a tougher nylon part, and welds up, then polishes back, the unnecessary slots. To get the fit perfect, that nylon bush is reamed before it is pushed home. Eagle could commission new, improved parts from a supplier. It would probably be cheaper, but that’s not the point. The original part is re-engineered. It takes several hours. 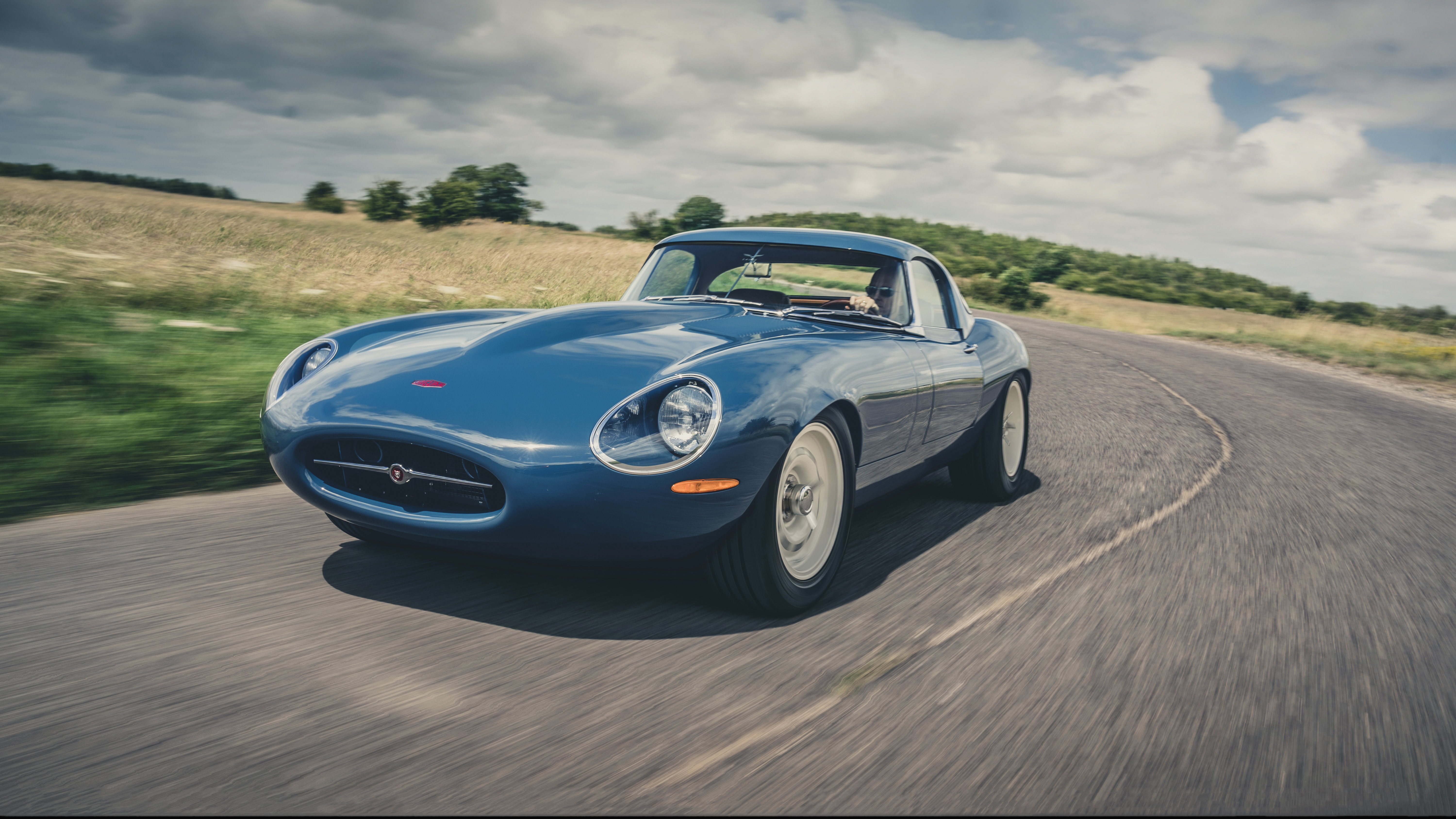 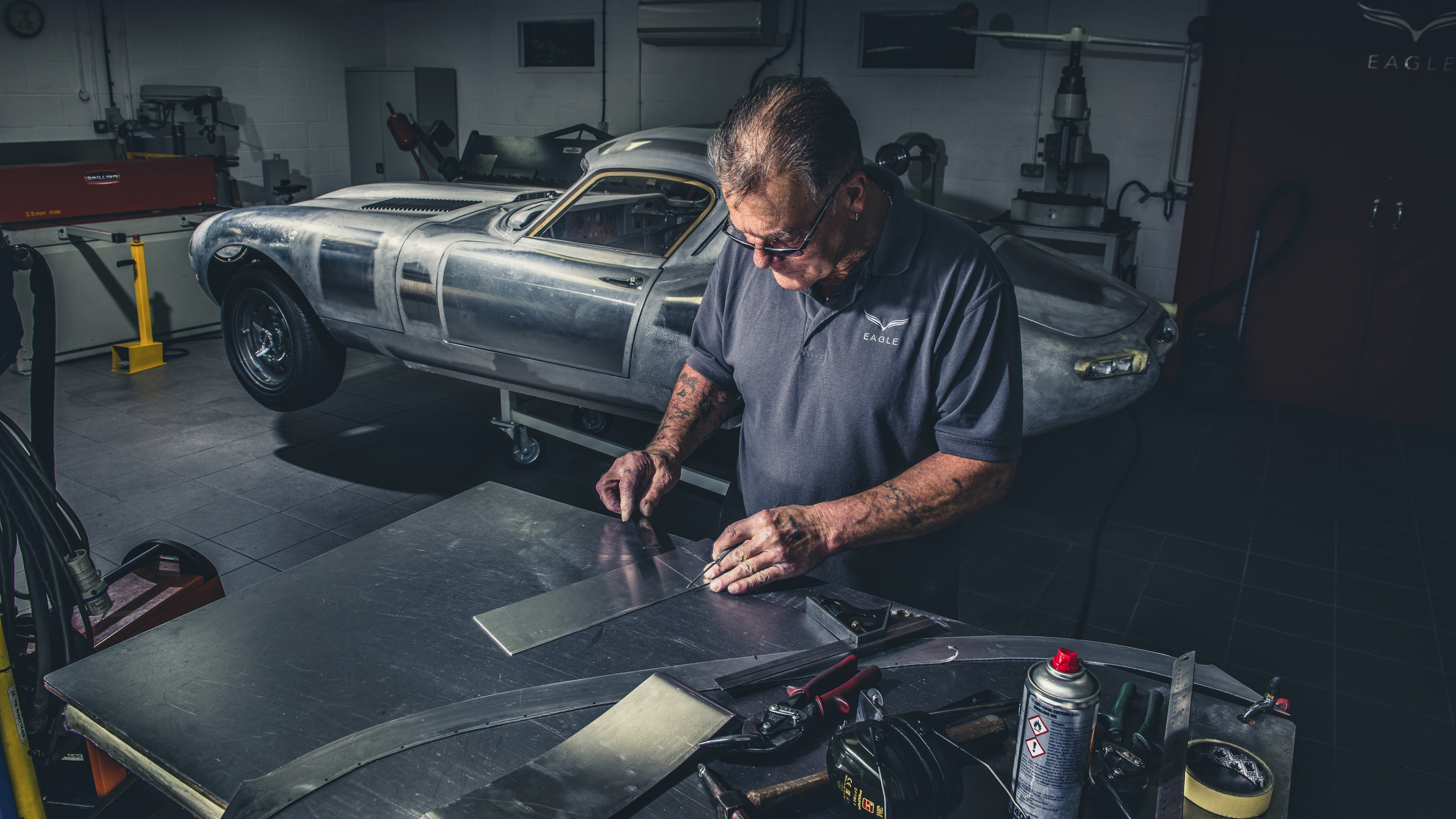 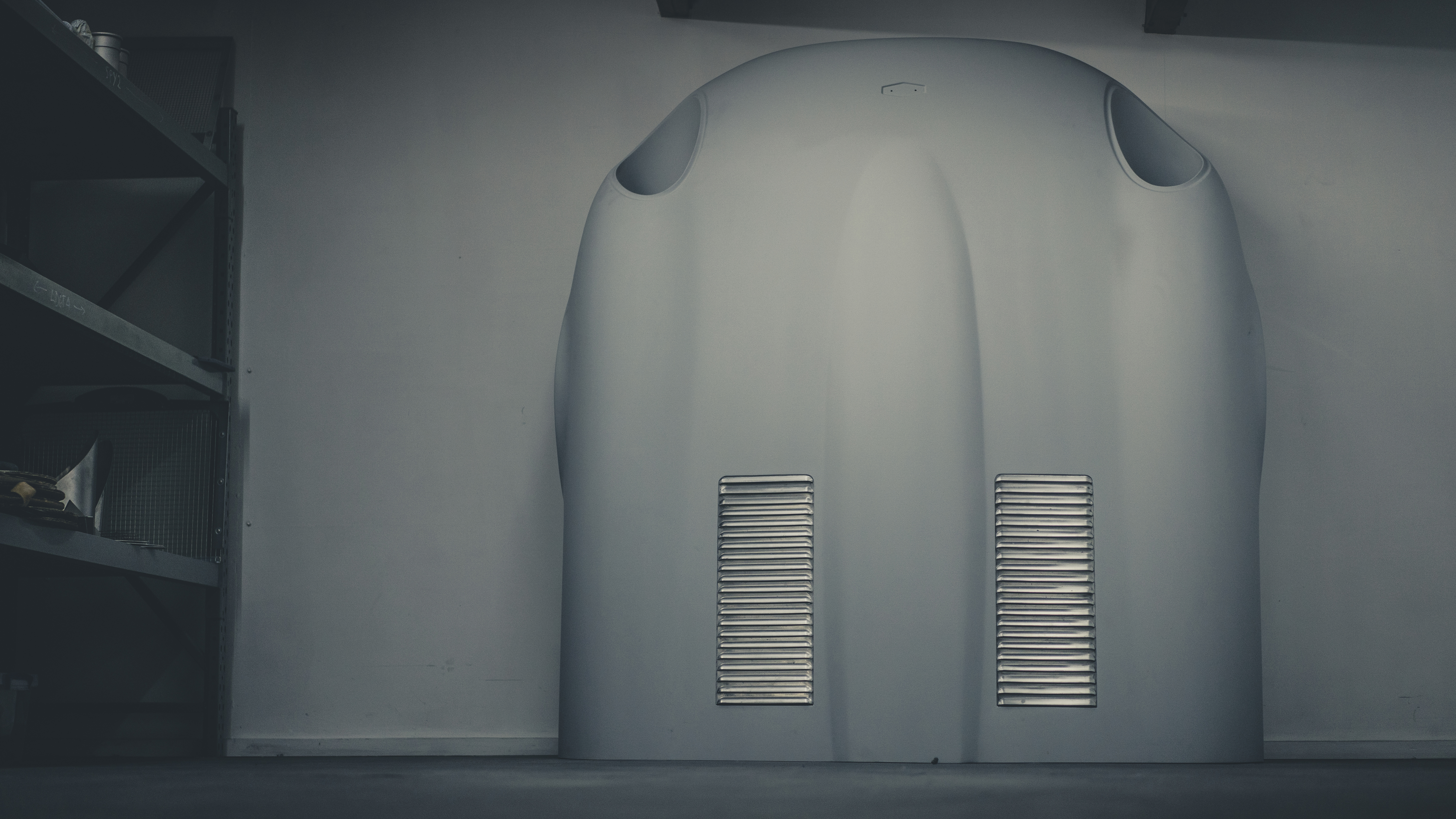 How many parts make up an Eagle E-Type? No one’s quite sure, but they’re all here, neatly laid out on racks, sitting in jigs, waiting on shelves or benches, ready to be carefully, diligently connected each to the other: valve springs, washers, sheets of aluminium, steering arms, wires. And if they’re not here already, they’re probably in the process of being created behind another door in the pristine yard of this tucked away farm.

Each door is a gateway to a magical realm: behind one you’ll find Gregg May hand assembling a 4.7-litre straight six and carefully measuring and recording everything to a thousandth of an inch. No millimetres here. He’s been working on these engines for 15 years. Next door, Tim Wharton (eight years’ service) has a gearbox in pieces. It’s so beautiful it should stay that way. Lorenzo ‘everyone calls me Larry’ Crane (16 years) is trimming and working the aluminium body. It’s a lovely warm day so the garage doors are thrown open and he works with the sun on his bench, each reshaped sliver helping to perfect the stunning unpainted Low Drag GT behind him. That bodywork, made up of 27 individual pieces, is the result of 2,500 hours of work. Not far off a year. I say work, but what I actually mean is staggering craftsmanship. Larry learned his trade repairing Rolls-Royce bodywork. Today, even Rolls will probably replace, not repair, damaged panels – panels that are likely to have been pressed or superformed in the first place, not hand rolled. As Ryan Thompson (four years) tells me in pauses between hand sanding the complete bodies, “if it was easy, everybody would be doing it".

The doors are helpfully labelled, names etched beautifully into glass. Fabrication is my favourite, chiefly due to the ancient machines in Andy Pitwell’s lair and the curls of metal on the floor. He’ll also have made the seat frames, welded and improved suspension drop links, bent brackets into shape and done a thousand other little things, each one a story in itself. He’s the chap who, stooped over his machines, sorts the steering column out. 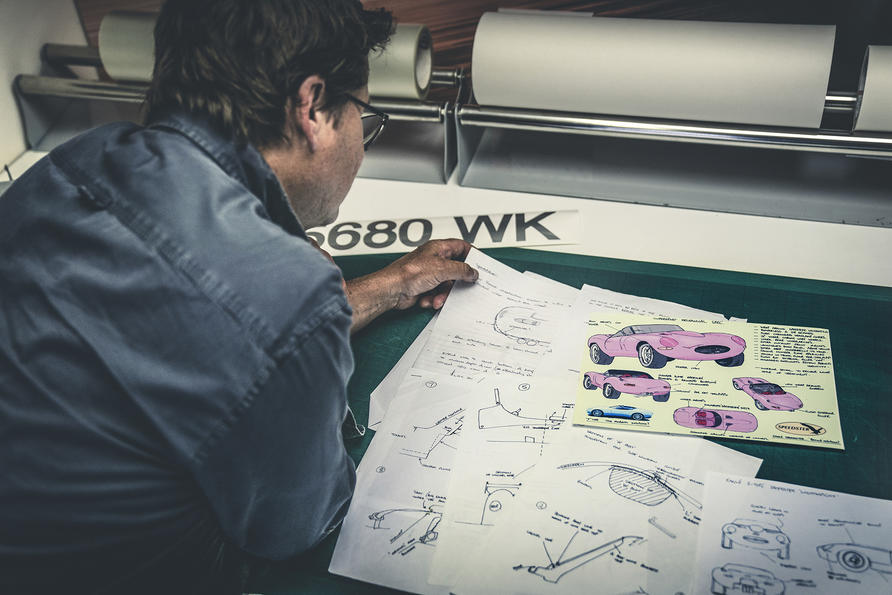 The point, of course, is that every single component receives the same care, thought and attention as the upper steering column housing. It’s the thought that counts. How often have you heard that? You and I could apply care and attention, but thought comes via knowledge and that has to be earned and experienced. Thought explains why the floor is lowered and the rear bulkhead moved back so there’s more room inside, why the chassis is stiffened with extra bracing in the flanks, why the notoriously tricky to set up triple Weber carburettors run so smoothly, why the doors open and close so precisely. Paul Brace (31 years), director and man in charge of technical and design work, is particularly proud of that.

You open the door of the Lightweight GT and the leather seems to have an inner glow of warmth and health. Odd, considering that Floridian cows died in its cause. The hides are stitched together at the top of the yard on an ancient, but apparently unimprovable, Singer sewing machine by Paul’s fellow director Matt Dewhurst (31 years). Total staff at Eagle: about 20. The boss, founder Henry Pearman, isn’t in today.

I’m slightly dazed. Every door opens into a pocket of beauty and fascination. None more so for me than a narrow room – more of a corridor really – behind the assembly room. Here, there’s no one, just parts – all the restored, re-engineered components that have arrived from around the yard and are now laid out on racks, patiently waiting to be picked up by Steve Head (19 years) or Jake Snedden (eight years), to be fitted to the deep blue Low Drag GT they’re building up. Some come from suppliers – there are Öhlins dampers, a Nardi steering wheel, Focal speakers – but the best are the bits that had a before and now have an after.

No more than four cars a year take flight from Eagle’s nest, where they are currently working on the 49th E-Type and the 12th special. The specials are why you know Eagle: Speedster, Low Drag GT, Spyder GT and the latest, the Lightweight GT. All have historic relevance. In the case of the Lightweight, Jaguar originally built 12 of them for racing in 1963, featuring a 3.8-litre with 300bhp. Eagle isn’t building identical replicas, but restomods. Paul Brace doesn’t mind the term at all. “After all, we’re restoring and modernising.” 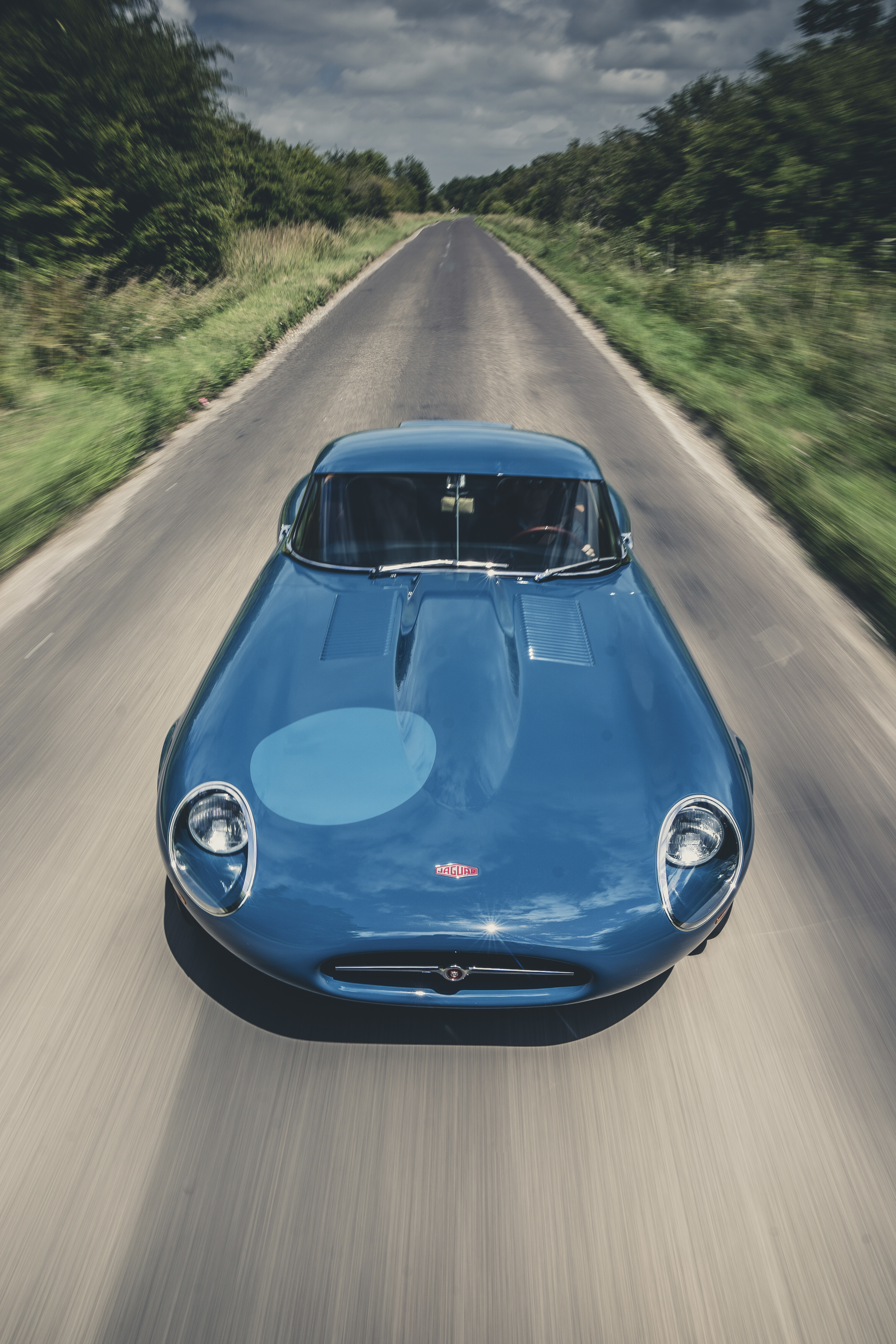 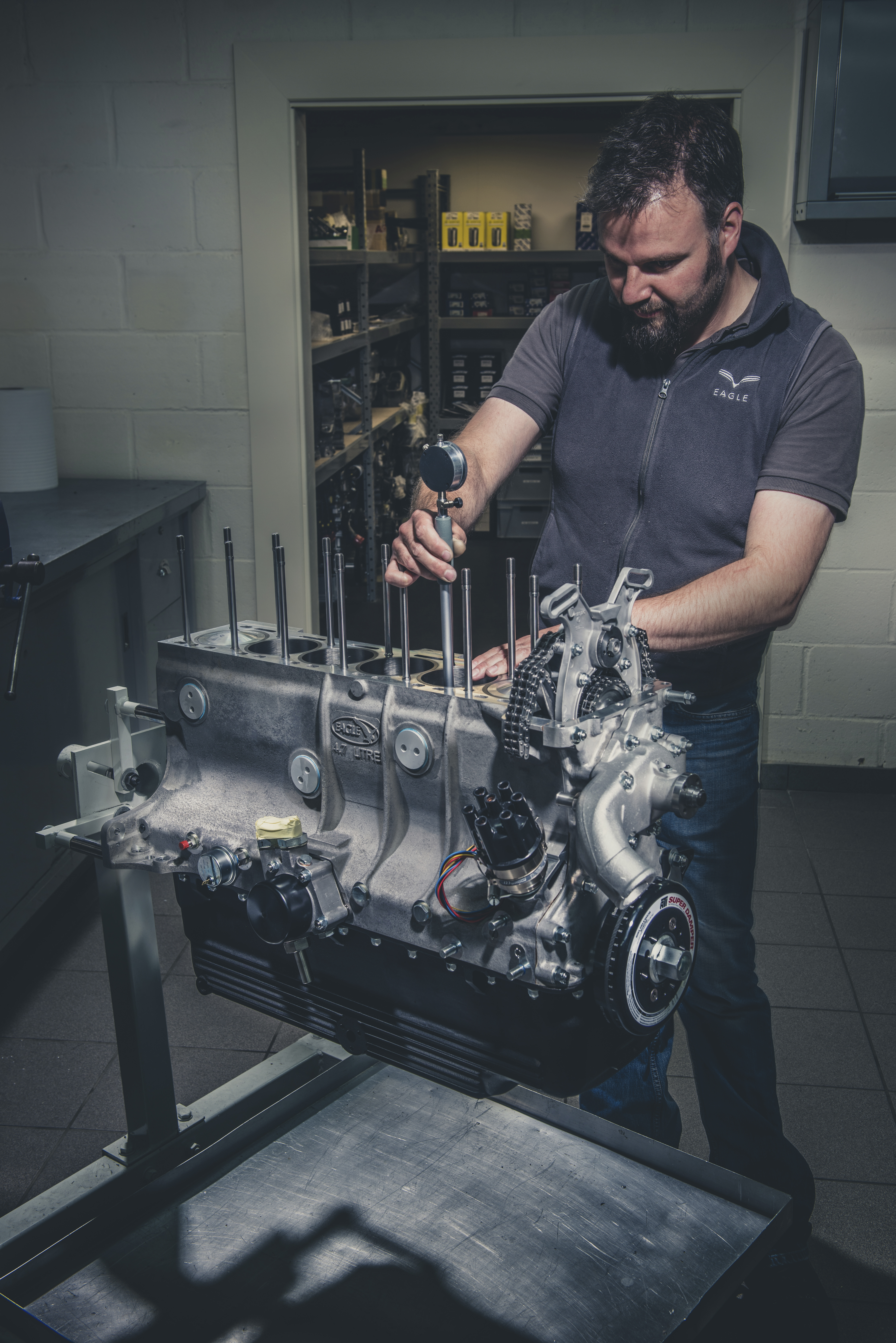 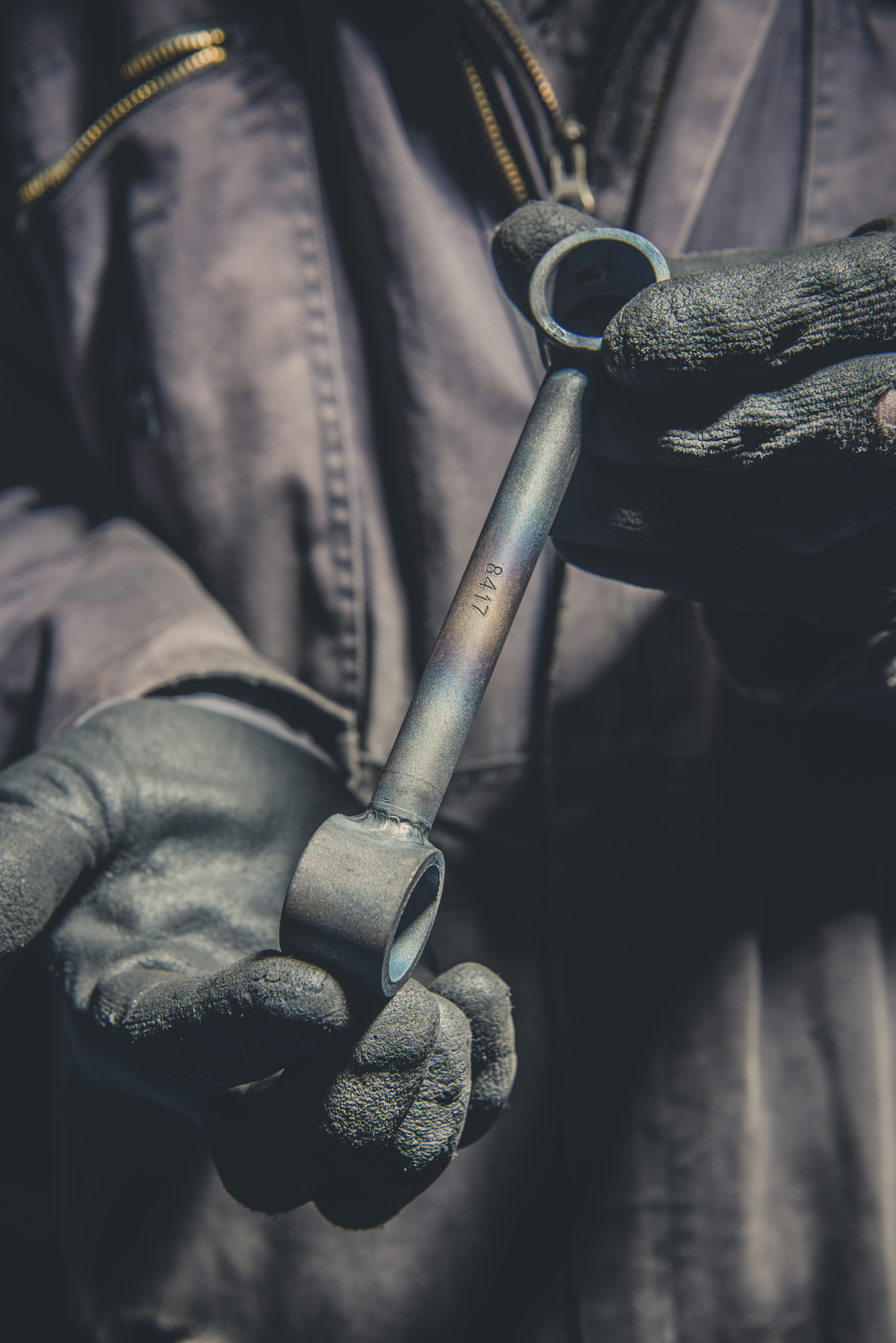 Here the motor Gregg built is a 4.7-litre with 380bhp, while Tim’s gearbox is a five-speed manual. Inside, Matt has done a stunning job with the trim, Andy’s seat frames feel so much stronger than in an original, plus Larry’s bodywork and James Salmon’s (five years) paintwork are beyond beautiful. That’s right, once you’ve been to Eagle, you attach parts to the people you’ve seen working on them. It gives the car so much added depth.

But not weight. Because here’s the other thing about the Lightweight GT – underneath you’ll find bleeding edge lightweight tech. Air for the engine enters through a full carbon fibre airbox, passing into the carburettors though a 3D-printed nylon housing. Once through the cylinders it passes into an Inconel manifold, then out via a titanium exhaust. The wheels are magnesium, so too are the sump, diff casing, gearbox, bell housing and more. This is an astonishing amount of effort to go to – way more than any modern carmaker puts in when doing a lightweight version of its latest supercar. It might save up to 100kg, but Eagle’s Lightweight GT weighs over 200kg less, giving an all up weight of just 1,017kg.

Of course, it all operates beautifully, because you’ve seen how even the humblest piece of metal is revered. Thumbing the starter brings the Lightweight thrumming to life, the gearbox snicks gracefully into first, and with no apparent effort, you’re off. And it is this easy, oiled movement that tells you, well, you’re not actually in an original E-type. There’s no play in the steering, no creaks from the cabin, the gearbox isn’t a maze of blind alleys, the engine doesn’t baulk low down. But I never thought it would, because I’d seen the craftsmanship that goes into the components and knew it would be mirrored in the way that the car drives. 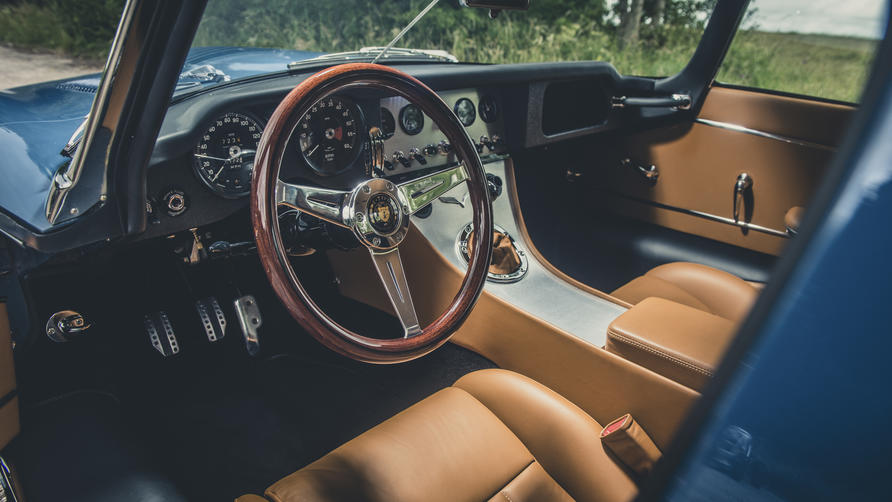 Torque arrives, thick, rich and glorious, pretty much immediately. It’s not pushing much weight, so even though the gearing in this one is longer than I would choose, each ratio is consumed in a rasping rush. At 3,500rpm it comes on cam, kicks again and barks all the way to the 5,800rpm limiter. Sunlight reflects off chrome, the slender polished wheel is warm under my fingertips, leather nestles me and the view down the bonnet is long, blue and lovely. Heaven.

And I mean that. As far as driving experiences go, I don’t think that there’s anything else to touch it. Modern supercars have traded experience for speed. You want driving addiction? Here it is, a car that sings to you, not just from its engine, but every component. Sure there’s a bit of shiver through the chassis, but it drives so crisply, and with such perfectly judged balance, dexterity and grip. I drove it so carefully to start with, never even thought about sliding this £800,000 one-off through a corner, but the Lightweight GT is so confidence inspiring that I couldn’t help myself. But I knew I’d be OK because the steering twists perfectly inside Andy’s revitalised upper steering column housing. 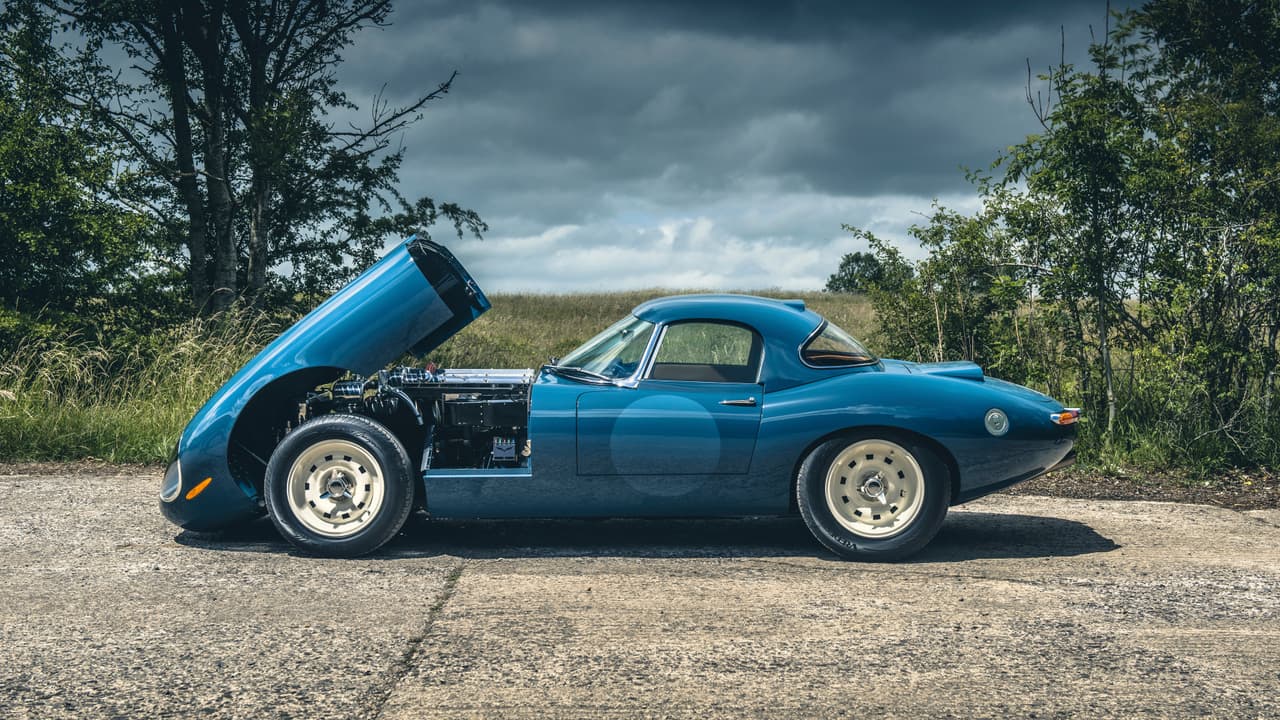